10 THINGS YOU SHOULD KNOW ABOUT THE RAPTOR 700R

— Yamaha has been the number one supplier of sport quads even when other ATV manufacturers have ignored this group of off-road enthusiasts. This dates back to the late 1980s when sport quads came under attack from the general news media. Performance models began to disappear from the lineups of most manufactures, but not for Yamaha. The two-stroke Banshee remained available every year from 1987 to 2006. So did the two-stroke Blaster and the four-stroke Warrior 350. 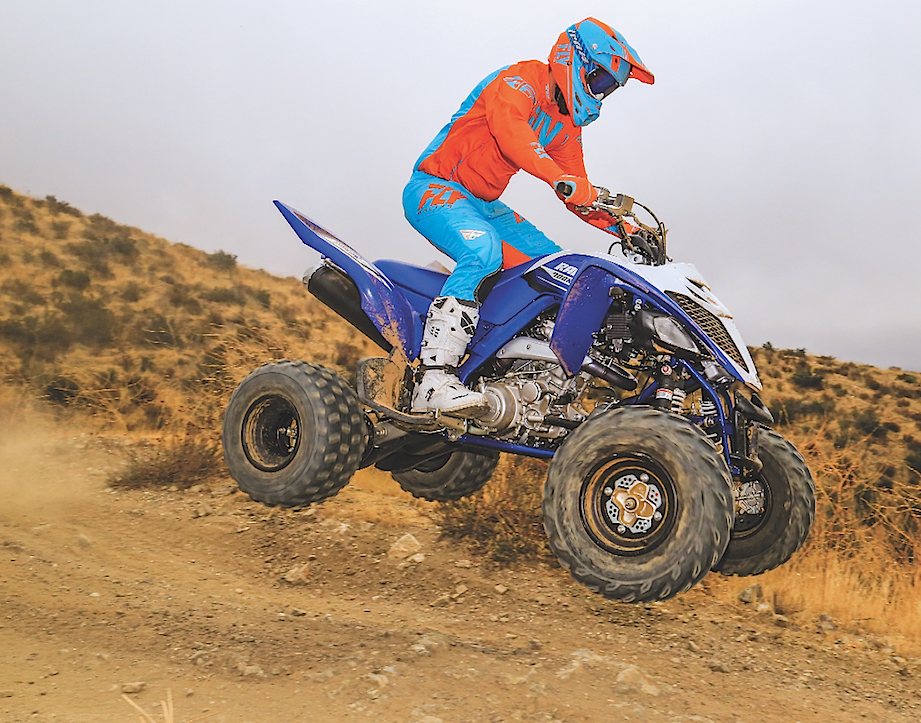 Yamaha continues that philosophy today by providing the YFZ450 and Raptor 700 to the sport quad riding enthusiasts. Some riders may complain that these machines don’t get major changes every year, but they have seen far more than the Banshee, Blaster and Warrior received during their nearly 20 years of production. Since the Raptor’s first introduction its engine, frame, suspension and styling has seen significant upgrades. 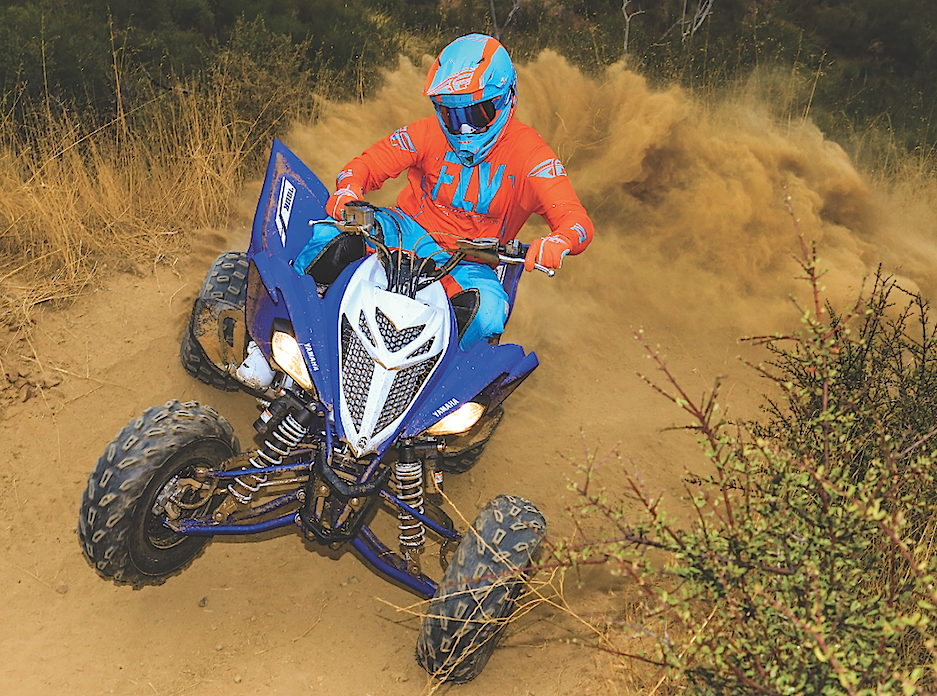 The Dirt Wheels crew has a new 2018 Yamaha Raptor 700R in our hands now that we are beginning to test. After unloading it off the trailer at our favorite riding area, we gave it a good look over and here are the list of things worth noting: 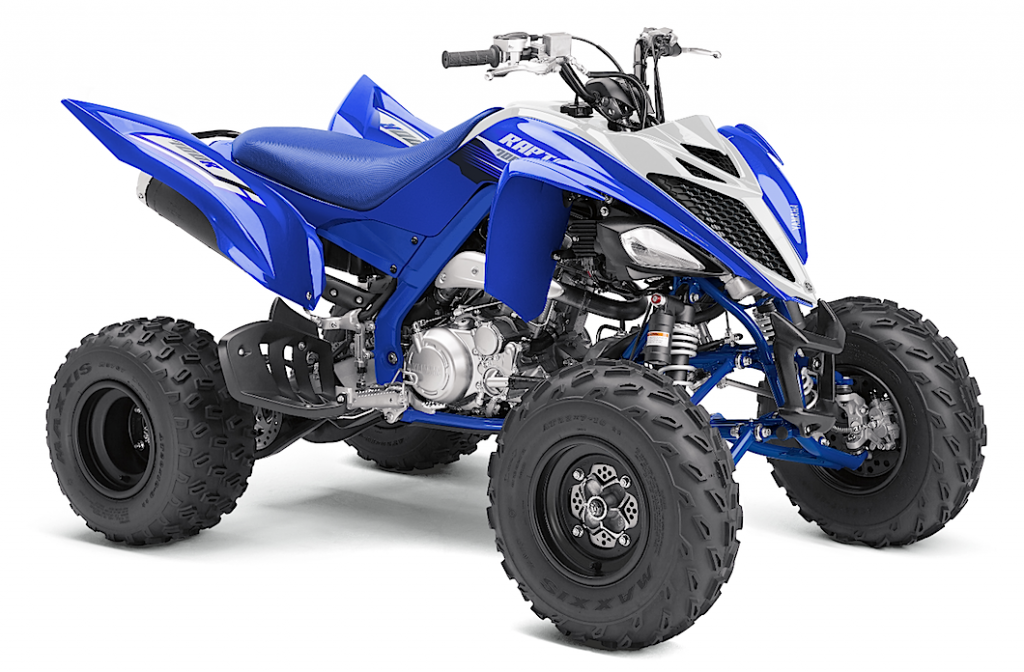 The 686cc, liquid-cooled, SOHC, 4-valve engine is not hurting for horsepower. It has a 44mm, fuel-injected throttle body that allows the engine to continually increase power up to 9,000 rpms. The dual counterbalancers control vibration of the big single and keep it running smooth.

Along with the Raptor 700’s 102mm bore it has a long 84mm stroke. This means it makes power at lower rpms too. You don’t have to rev it out to get quick acceleration. It instantly moves forward when your thumb hits the throttle.

When you let off the Raptor’s throttle the engine compression helps slow it down more than smaller engine quads. This is something to get used to if you’ve been riding two-stroke Banshees and Honda 250Rs. You won’t be on the brakes as much or replacing brake pads as often.

The Raptor 700 has five forward gears and reverse. The gear spacing between first and fifth have always seemed spot on with all of the previous year Raptors we’ve ridden. This is helped by the fact that you don’t have to shift this large single as much as you would on a 400 or 450. Instead of down-shifting for a turn it’ll pull a taller gear.

Like every quad these days the Raptor has push-button electric starting. However, you can hit the starter button while it’s in any gear when you pull in the clutch lever. This comes in real handy if you lock up the rear brakes and accidentally stall the engine. You can quickly get it running again while still moving. 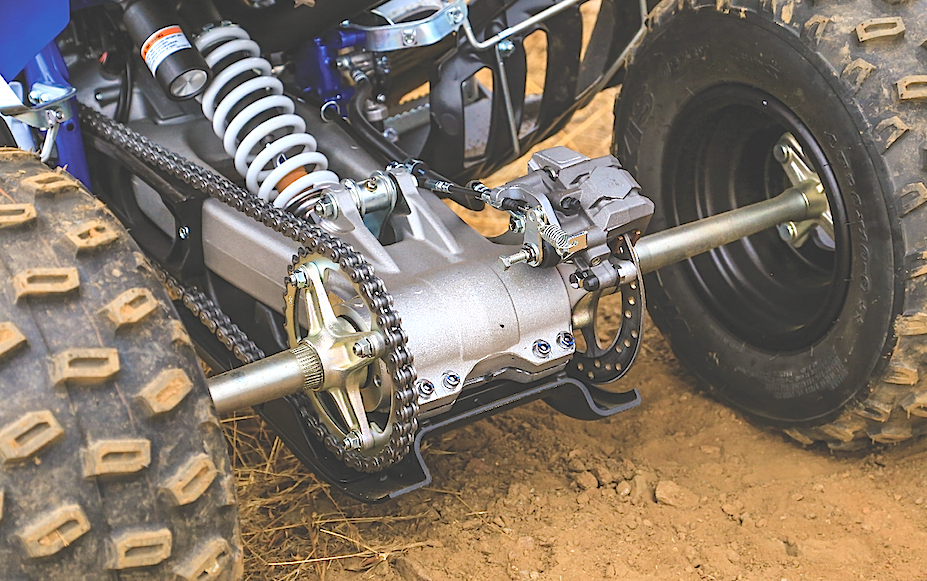 The standard Raptor, the 700R and the SE model provide 9 inches of suspension travel in the front and 10 inches in the rear. The difference is the R and SE have piggyback reservoir shocks with adjustable rebound damping and high and low speed compression adjustments. The standard Raptor only offers adjustable spring preload.

The Raptor’s frame is a combination of aluminum and steel. The backbone is strong aluminum, but the front section is steel, which makes it possible to be straighten if bent up in a crash. The rear swingarm is also cast aluminum for maximum strength.

Two fingers on the front brake lever will easily slow down the Raptor. It has twin-piston calipers squeezing the front drilled disc rotors as well as twin pistons on the drilled rear disc.

MADE IN THE USA

The Raptor is built at the same factory in Georgia that produces Yamaha’s 4×4 quads and UTVs. It also has a plug-in for Yamaha’s Diagnostic Tool which allows for easier serviceability at the dealer. 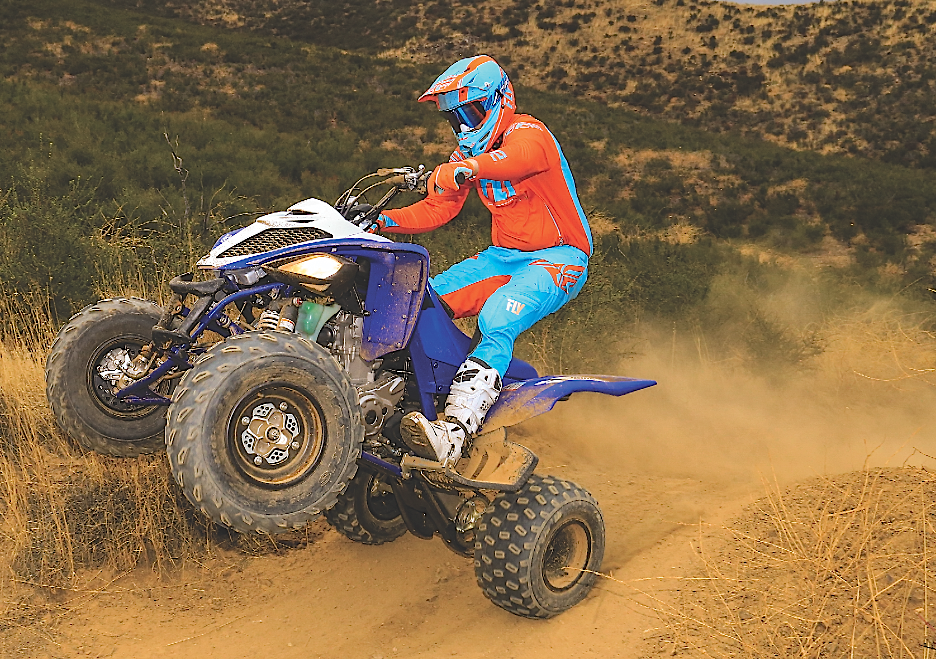 Stayed tuned to Dirt Wheels for our complete evaluation of the 2018 Raptor when we conclude our testing and present the final results.