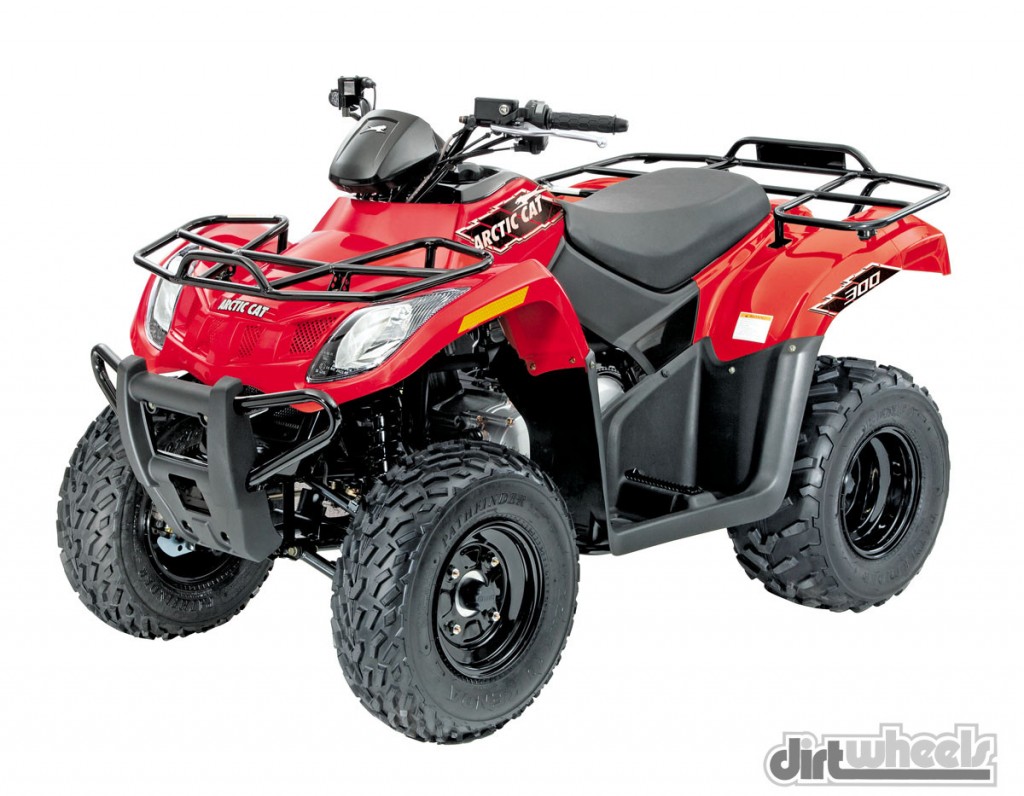 ARCTIC CAT 300 ($4299)
Arctic Cat’s basic 4×2 has been around a very long time and has proven to be a reliable machine at a good price. The 300 has a 270cc liquid-cooled motor that drives a CV transmission with high, low and reverse. The suspension is fully independent with double A-arms on all four corners. The front rack can carry 50 pounds; the rear, 100. The 300’s towing capacity is 500 pounds. 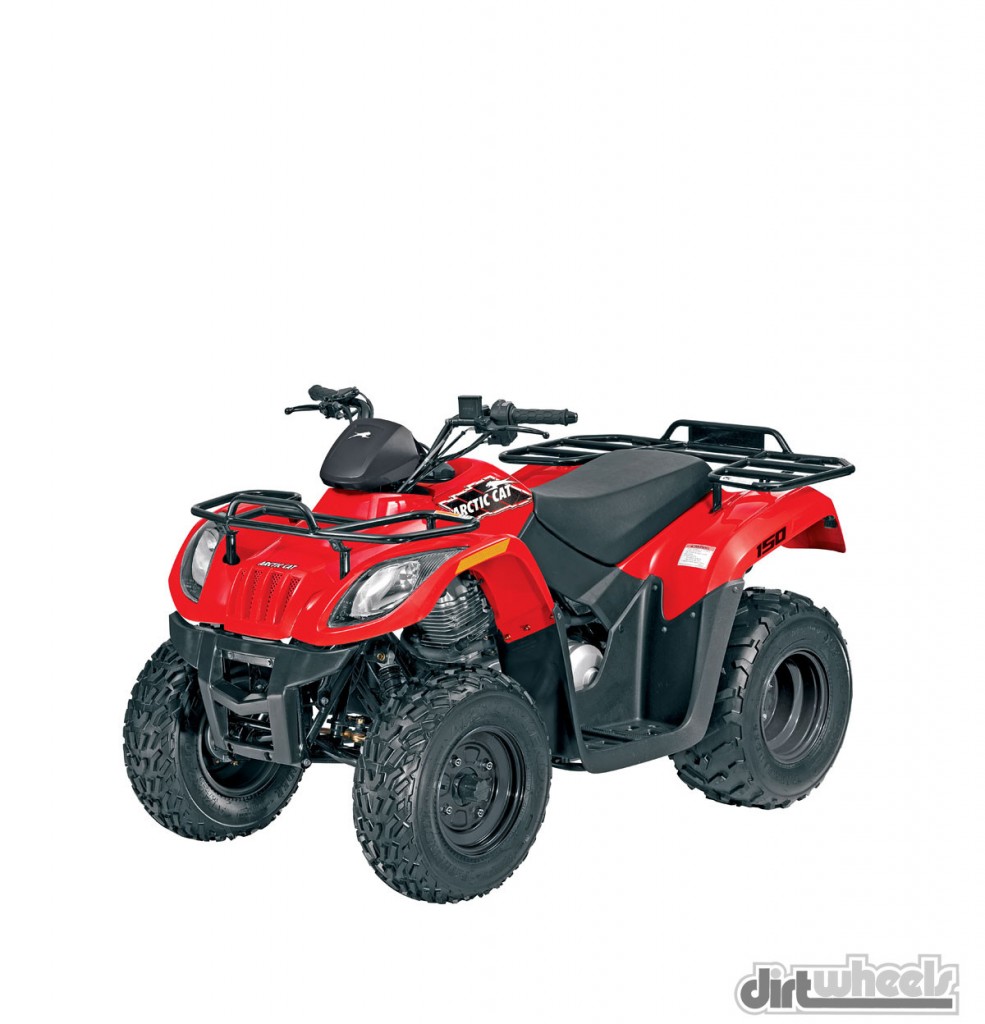 ARCTIC CAT 150 ($3699)
This machine is very similar to the Kymco 150. It has steel racks and a towing capacity of 300 pounds. It’s powered by a basic, air-cooled, two-valve motor with a carburetor. In the rear it has a swingarm, single-shock suspension, and in the front it has double A-arms with preload-adjustable shocks. It also features a digital gauge and real headlights and taillights. The 150 is rated Y-12 for 12-year-old riders. 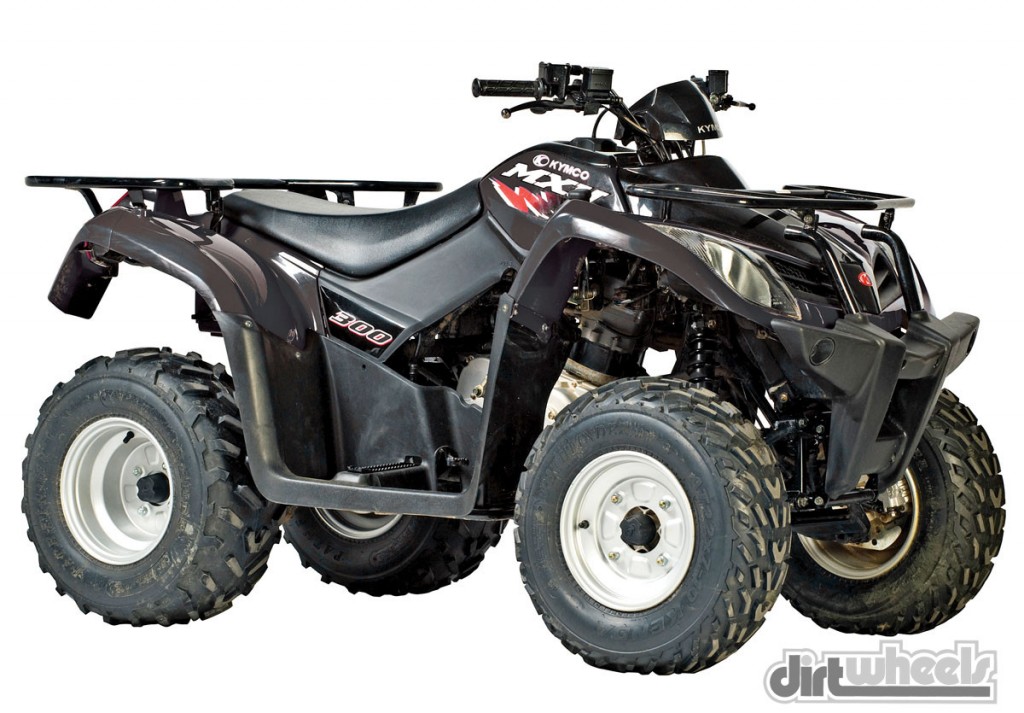 KYMCO MXU 300 ($3999)
Kymco’s 270cc two-wheel-drive utility quad has become a staple in the industry. It’s reliable and has functional features for a very good price. The MXU 300 has dual A-arms in front, swingarm suspension in the rear and 500 pounds of towing capacity through a towing-hitch bracket. It’s a compact machine that fits easily in virtually all pick-up truck beds. Available in red, black or green. 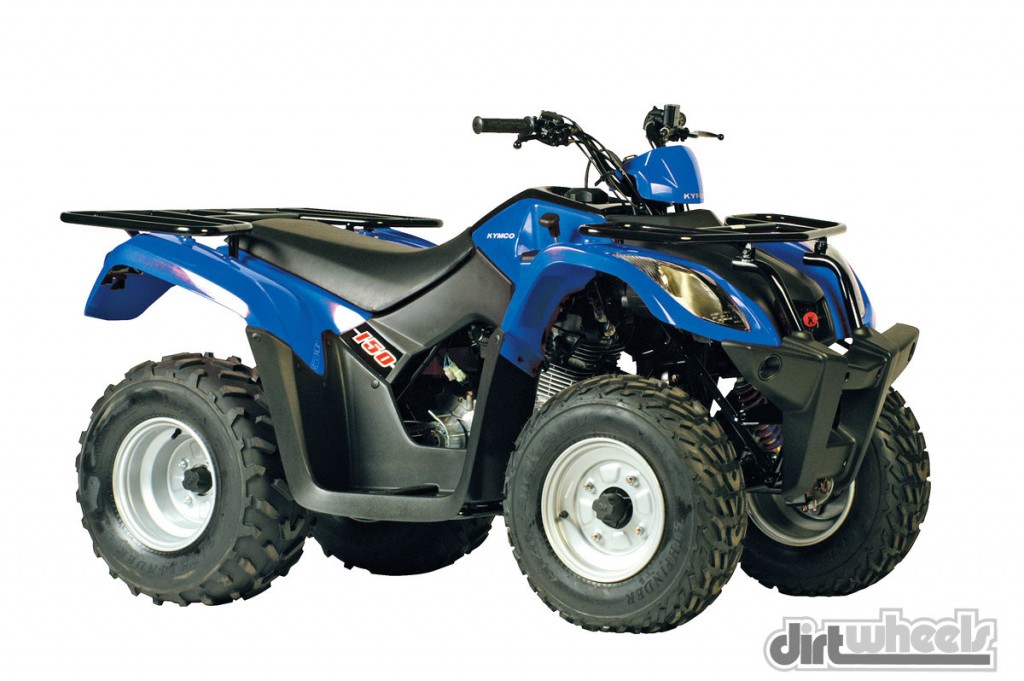 KYMCO MXU 150 ($3099)
This is a simple, inexpensive and very functional ATV. The MXU has a 149cc air-cooled motor with a carburetor and a chain final drive. It still has reverse, electric start and a CV transmission. There’s also a kick-starter backup. It has drum brakes and full racks. And, the MXU 150 is rated Y14 for riders who are 14 years old and older. Available in red, green or blue. 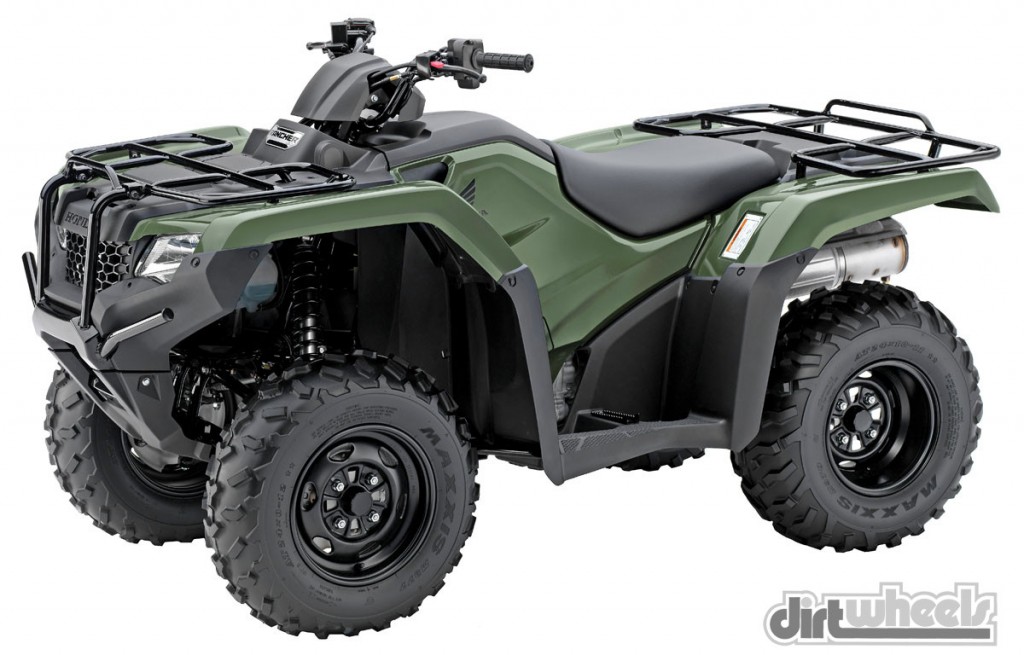 HONDA RANCHER ($5199)
The Rancher isn’t one specific ATV, but rather a family of quads. All have the 420cc longitudinally mounted motor with shaft drive. The base model is a 2WD unit that offers a choice in transmission. Honda remains skeptical of belt-and-pulley transmission systems; instead, either a dual-clutch transmission or the electronic-shift program. The 2WD Rancher doesn’t offer a power-steering option. 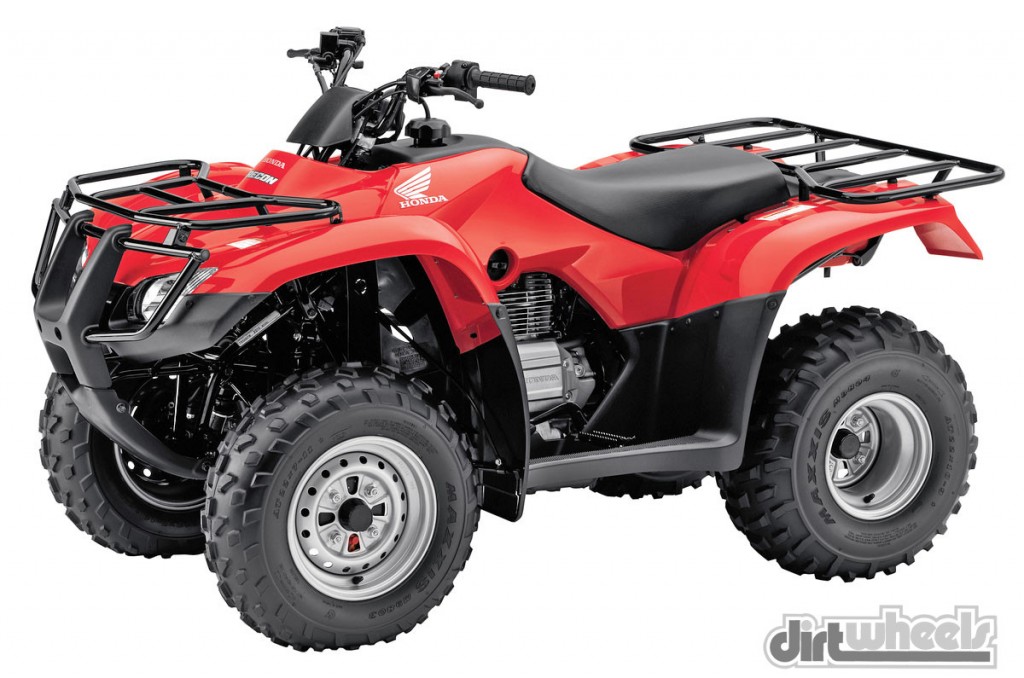 HONDA RECON (TBA)
The Recon is a 2WD utility quad that uses the same basic 227cc engine as the sporty TRX250. In this form it has steel racks front and rear. The Recon is available with either a manual five-speed gearbox with reverse or with the Honda Electronic Shift Program, which adds $250 to the price. The brakes are drums, the final drive is shaft and the warranty is one year. 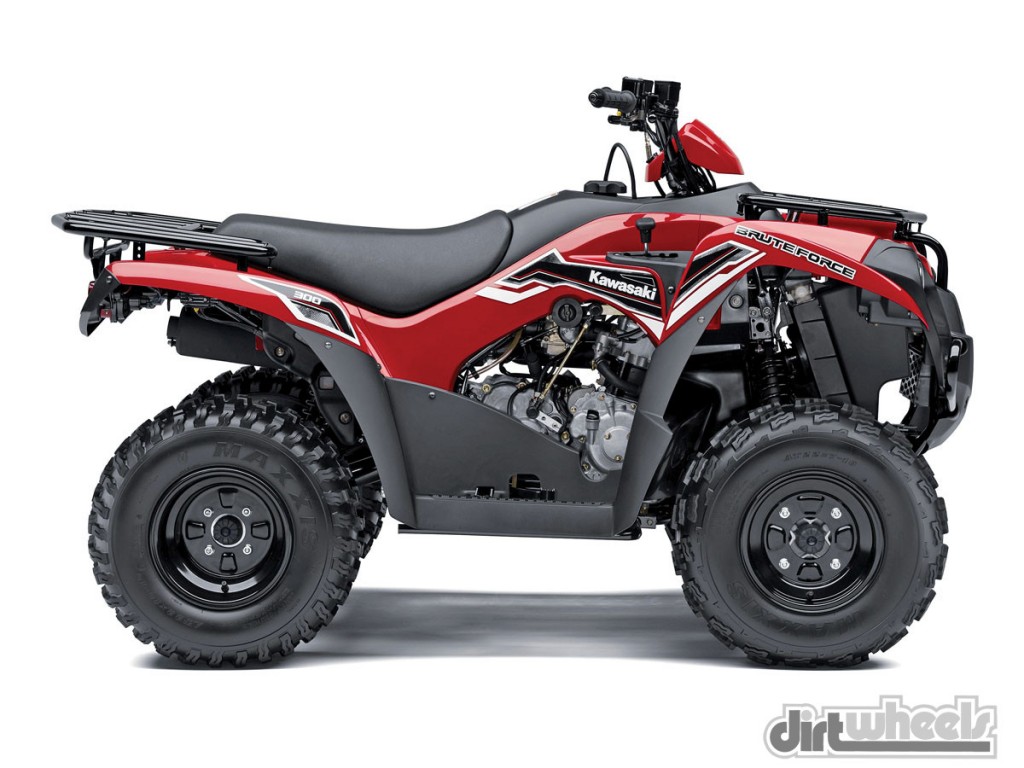 KAWASAKI BRUTE FORCE 300 ($4299)
Kawasaki’s little Brute is two-wheel drive, but has many of the other features of big utility quads. Tops on the list is the driveshaft. It also has 500 pounds of towing capacity and 110 pounds of capacity on the steel racks. The 271cc motor is hooked to a CV transmission with high, low and reverse. The front suspension is double A-arm, while the rear is swingarm. Available in black or white. 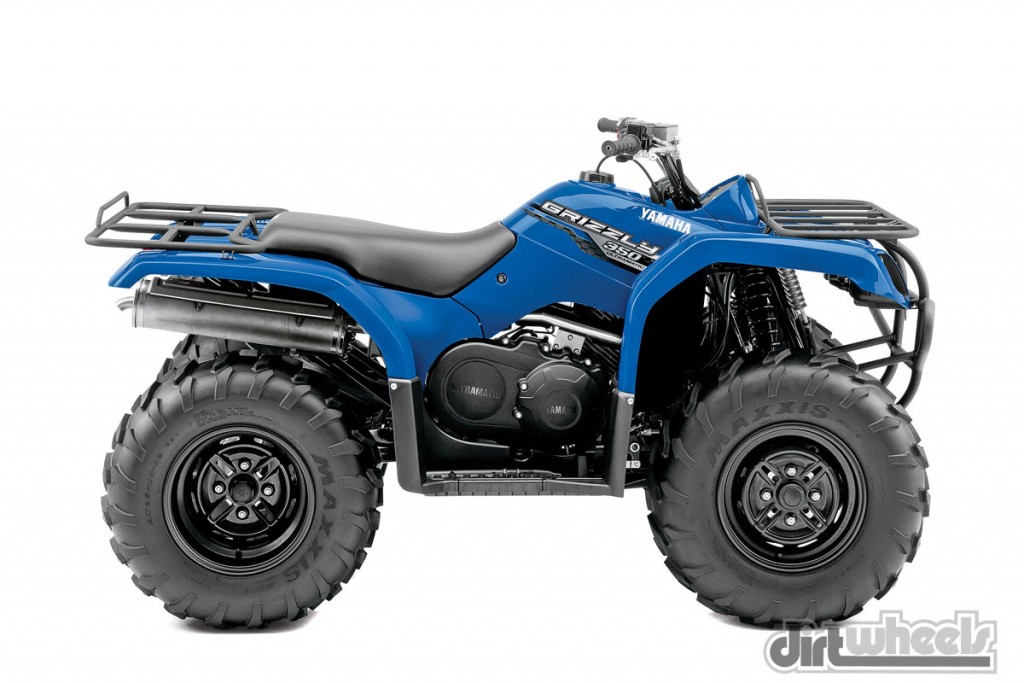 YAMAHA GRIZZLY 350 (2014 model, $4699)
We once thought that this version of the Grizzly was on its way out, replaced by the lower-priced Grizzly 300. But, the 300 left and the 350 is still here. The bodywork makes it hard to tell it apart from the full-sized Griz 700, but the motor is a mild, air-cooled two-valver with an oldfashioned carburetor. The same machine is available in 4WD for about $900 more.