Chances are Hisun isn’t at the top of your ATV wish list but testing the Forge 750 two-up leads us to believe that the brand will be showing up on more lists. The story of Hisun all-terrain vehicles is similar to the popular and ultimately successful forays into the U.S. automobile industry staged by first Hyundai and then Kia. For Hyundai and Kia the manufacturing is in Korea, while Hisun is in China, Hyundai and Kia had a long history making cars in Korea before entering the U.S. market. Similarly, Hisun has 27 years of experience manufacturing in what is now an ultramodern factory with over seven million square feet. Hyundai and Kia pushed into the U.S. market offering very well-equipped cars at a price the Japanese could not match. Hisun works on the same principle of offering a lot of standard equipment for the price. At a starting price of $7599 for a 750cc, EFI, two-seater 4×4 quad that comes standard with cast-aluminum wheels, a 2500-pound-rated winch and hand protection, it is at least $2000 less expensive than its competitors. For example, a Polaris 570 two-seater with a winch and hand protection is just over $10,000.

You could well ask why we compare the 750cc single Hisun to the 570 Polaris. The next size up for a Polaris two-seater is an 800cc twin, and that is not really a straight comparison to any of the big singles, and certainly not to the Hisun 750. In reality, while the Hisun started easily, ran quietly and smoothly, and was more than willing on the trail, the 570 Polaris single is at least a match for the Hisun 750. It isn’t a powerhouse. In the company of a Yamaha 700 Grizzly the Hisun was more sedate and the power difference was greater than we can explain away with the meager weight difference. The liquid-cooled EFI 750 single runs well and always responds well, but it just isn’t a major player in acceleration. With the intended audience looking for a two-up touring mount, the 750 will make enough boost for most riders. Just realize going in that the Hisun’s seamless flow of power is closer to the 500/550 class of 4x4s.

As is common these days, the Hisun transfers power through a CVT. The drive is unobtrusive, though you do hear mechanical sounds from the CVT. This CVT provides ample smooth and consistent engine braking. You might even find too much engine braking for steep descents. We routinely shifted into high range to make descending smoother and less likely to lock the rear wheels or transfer too much weight onto our wrists.

While we had issues with the engine braking being enthusiastic, the actual brakes are smooth and controllable with plenty of power for a large and powerful quad. All four wheels are normal, vented hydraulic discs. We experienced none of the fade that we’ve had with some large 4x4s.

All of the Hisun controls have a nice feel, and the layout is conventional. A shift lever on the tank has a push-button that you push in sideways before the shifter will move. It selects from park, reverse, neutral, high and low. You must also be stepping firmly on the rear brake for the best shifting. The start button is on the left side of the bar with the light controls and turn signals. It needs the rear brake handle pulled in to start but it will start in gear. Starting was always immediate but if there was a problem, there is a recoil, pull-start back-up. That is rare for EFI quads. On the left side of the handlebar is a thumb throttle and the push-button controls for the 4WD and differential lock.

Hisun hasn’t gone crazy with the styling of the Forge 750 two-up. It seems to have gleaned styling cues from many popular 4×4 models, but it still maintains its own look to some extent. Part of that “look” is the complete, high-end appearance with the standard trim. As we mentioned, it has the cast wheels and that handy winch with a handlebar cable control. It also sports a full-coverage handguard system where both sides are joined in a large single piece. Where most 4×4 models have non-adjustable shocks, the Forge 750 two-up has adjustable shocks and even reservoir units in the front. A large and amply padded seat finishes up the bodywork. Above the body are front and rear racks. They are heavy-duty enough for most jobs within their limited capacity. Compared to the standard Forge 750, the added 3.5 inches of wheelbase and the assumption that the machine will likely be carrying a second person reduces the work specs.

The combined capacity of the racks is 111 pounds, just as the standard model, but that is less than other big-bore machines. We aren’t sure why the capacities are low. The racks look beefy enough, and the suspension feels more than ready to handle the weight. The two-up machine has a modest tow capacity of 397 pounds compared with 1200 pounds for the Forge 750 single-seater.

We had a couple of immediate impressions of the Forge 750 two-up: the first was the power feeling more 500/550 class than 750 class. But, as soon as we finished that initial straight-line run, the front-end traction grabbed us. We don’t ever recall a big 4×4 that nails a line like the Forge. The Yamaha Grizzly we had along felt pushy and relaxed in turns. It could be the pronounced tread blocks on the 26-inch radial tires or simply front-end geometry, but the front traction in turns is impressive. Most companies call two-up models “touring” models. In actuality, the riding position is quite reminiscent of a large-displacement touring street bike. Riding standing isn’t a usual strength of 4×4 quads, and the Forge has a bar with a lot of sweep for an off-road machine, so it is less of a stand-up machine than normal.

Naturally, when you have a passenger, standing would be even less likely. The passenger has ample room, a sturdy backrest and solid hand-holds so the rider could stand, but we doubt that many two-seaters will see extreme use.

While riding the Forge solo, we did notice that the long wheelbase actually makes it relaxed on short, steep climbs that make single-seat 4×4 quads wheelie-prone. The seated position is great but the lower area of the Forge is wide while standing. There are comfortable running boards for the driver and slightly raised but smaller platforms for the passenger’s feet. During our break-in ride the suspension started out very stiff but it softened up a bit. Turning the front-shock compression adjusters all the way out (softest setting) helped much more. Another rider helped even more. With two riders for a total rider weight over 400 pounds, the Forge rode very smoothly.

Certainly the seated riding position is open and roomy enough for long rides, but the Forge likes it best below 40 mph and is truly happy at 25 mph and below. In a deep sand wash we found that low range was good for around 25 mph, but shifting to high only added a couple of mph, so it’s not a sand dune weapon. The harder and more packed the surface, the better the Forge goes. Perhaps thanks to that crisp steering we weren’t interested in high-speed riding. We were doing a lot of full-throttle riding, chasing new sand washes, so our mileage was 12 mpg. That allows a worst-case range of 40 to 50 miles on a 3.4-gallon tank. 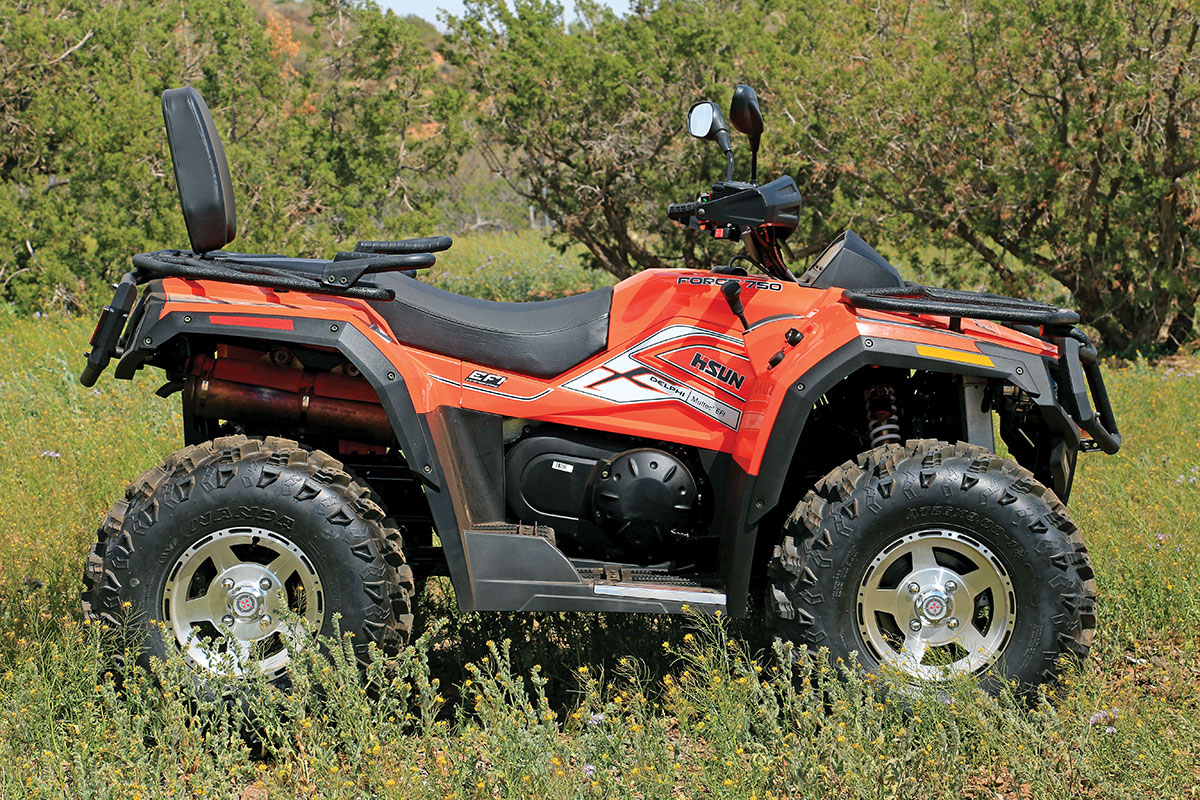 For work or play, the Hisun Forge 750 is friendly enough. Obviously, with the light-duty capacity numbers, it will be work-limited. As a pleasure unit it has its strengths. The cost difference is mild and we were impressed with the calm climbing ability when the going was rough with ledges and steps. We would feel comfortable riding anywhere with a passenger, because the Forge 750 has got what it needs. Both passengers travel in comfort, it climbed everything we wanted to go up, and the turning has you looking for the next curve as soon as you finish the last one. The price is good, and final assembly and testing of the machines are handled in the U.S. The importer claims to have substantial quantities of parts in hand and ready to ship. The Hisun deserves a look if you’re in the market, especially in the two-seater market.

Will the new Can-Am be better than the RZR and YXZ?