Kawasaki brings a host of new features and aggressive styling to the
sporty, capable and fun Teryx side x side range

People who like their adventures to include mud, trails and the great outdoors, the 2016 Kawasaki Teryx® side x side should be on the top of their shopping list. This incredibly versatile and sporty recreational utility vehicle combines great off-road ability and impressive comfort with legendary Kawasaki durability and quality. And for the 2016 model year, it has received a host of upgrades that will make it more appealing than ever.

New features include a redesigned front face that gives it a more aggressive persona to accompany its off-road toughness. The dashboard layout is new, and tilt steering is standard on all models, plus a thicker, sportier steering wheel for more driver comfort and confidence as well as standard Electric Power Steering (EPS) on all models. Further updates see the Teryx family getting new tool-free adjustment for the driver’s seat as well as new optimized setting for its Fox Podium 2.0 shocks. Add bigger 14” wheels on the Teryx LE model, and four powerful LED headlights on the LE and Camo models, plus a Kawasaki STRONG three-year limited factory warranty, and the 2016 Kawasaki Teryx side x side is an unbeatable package.

SPECIAL FEATURES OF THE 2016 KAWASAKI TERYX 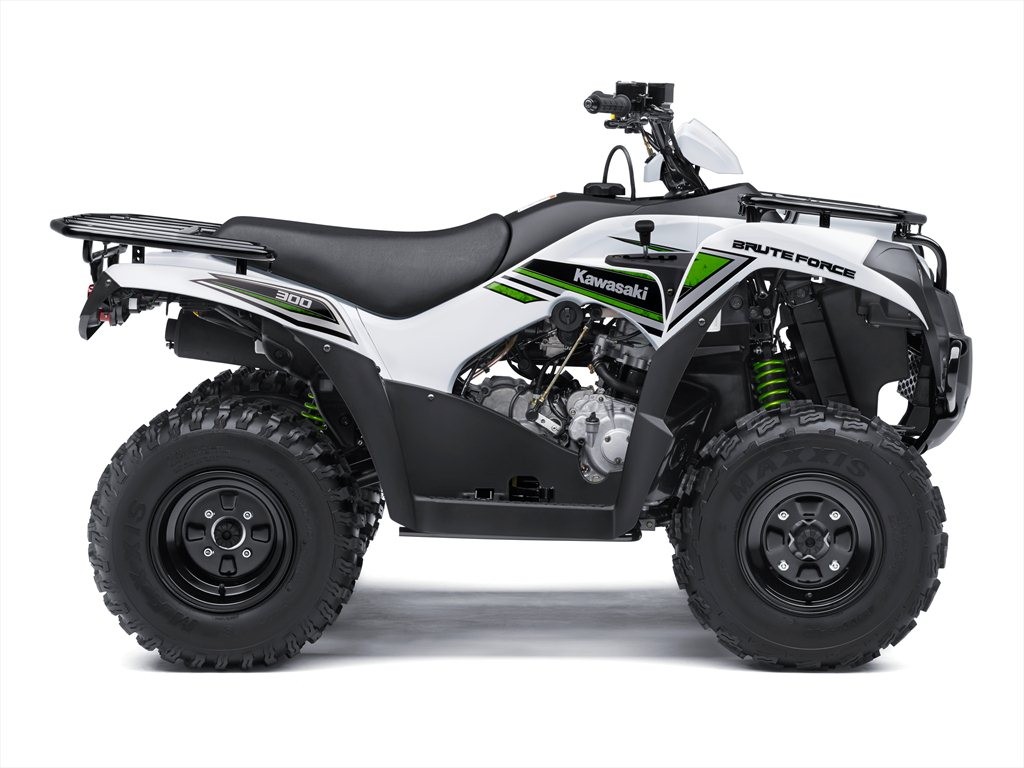 On the ATV side, the Brute Force 750, in EPS and EPS Camo is available on their lineup. The BruteForce 300 is out again. As for sport quads, the mini 50cc and 90cc models are the only available machines on that lineup, still awaiting the return of their KFX450.

The Teryx lineup sports the same models from the previous year, but the Mule lineup gained a new member, the Mule Pro-FX. They also have a new version of the PRO-FXT called the Ranch Edition. 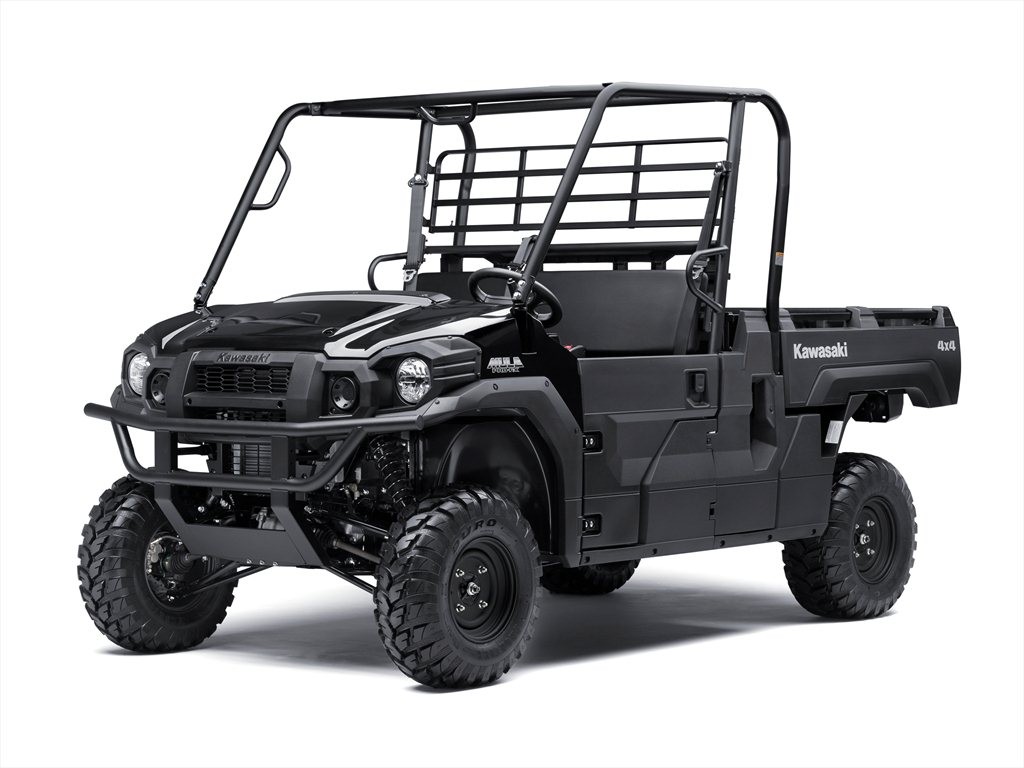 The Kawasaki MULE PRO-FX has single-row seating and a class-leading cargo bed for even greater practicality, dependability and comfort.

Having received acclaim and awards following its launch last year, the powerful and dependable Kawasaki MULE PRO-FXT™ is now available as a single-row seating variant called the MULE PRO-FX™ for the 2016 model year, giving full-size side x side customers another purchase choice. The new single-row PRO-FX gains a larger steel cargo bed, giving it the largest in its class and 20% bigger than any previous MULE, without sacrificing any of the cab’s comfort, but increasing its hauling capacity.

Developed alongside the PRO-FXT, the new MULE PRO-FX shares the same engine and chassis platform, meaning it is still the fastest and most powerful MULE™ ever built, with independent suspension, powerful disc brakes, effective engine braking and optional speed-sensitive power steering.

The cargo bed has a massive 1000 lb carrying capacity and is able to accommodate a full-size wooden pallet with the tailgate closed – something the competition can’t do!

The PRO-FX is also able to tow up to 2000 lb when the optional hitch is fitted, so the MULE PRO-FX will be perfectly suited to the job site, hobby farm or for a weekend adventure in the back woods. With this much capability, the MULE PRO-FX will allow you to clear your “To-Do List”, leaving you plenty of downtime once the work is done, and is always available for fun on the weekends. 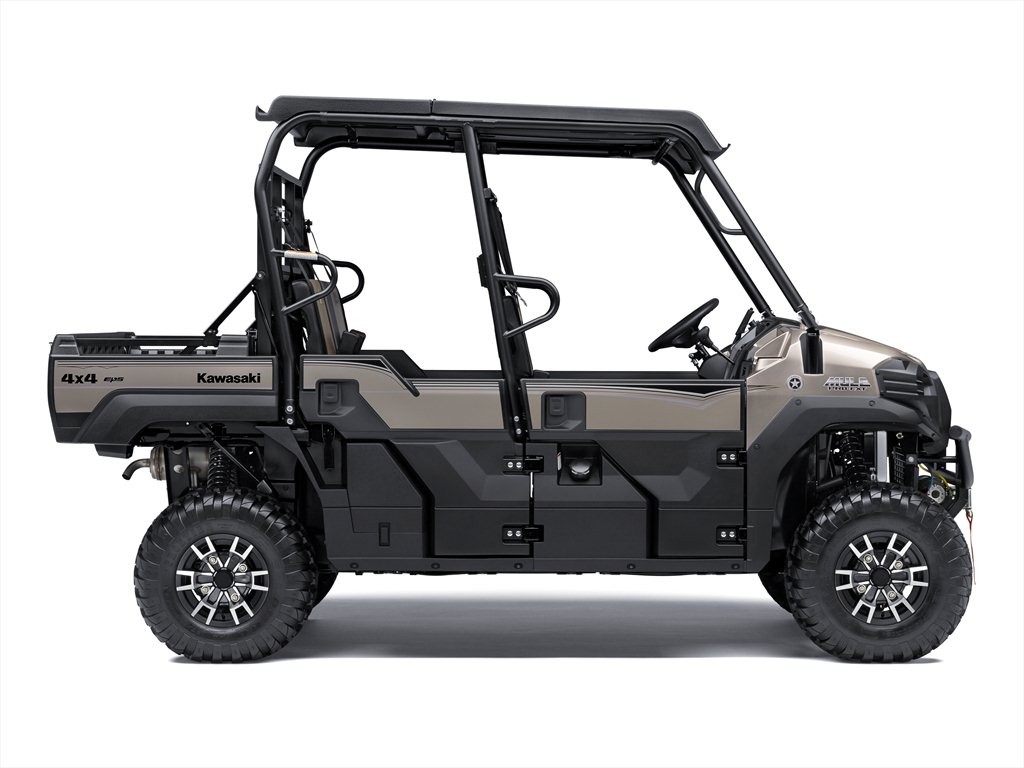 The Kawasaki MULE PRO-FXT™ is all about superlatives. It’s the fastest and most versatile MULE™ ever, offering a generous 48 lb-ft of torque from its dependable 812cc engine, versatile three- or six-passenger Trans Cab™ seating configuration, up to 1000 lb cargo capacity and up to 2000 lb towing ability as well as advanced speed-sensitive Electric Power Steering (EPS), comprehensive instrumentation and comfortable bench seats with seatbelts for every occupant. It is this winning combination that led to a number of industry awards being bestowed upon the MULE PRO-FXT following its 2014 launch.

To celebrate its success and build its reputation even higher, Kawasaki is announcing the premium Ranch Edition for the 2016 model year. It comes loaded with extra equipment and is finished in a painted Metallic Titanium color scheme to ensure it not only stands out but will be in even more demand on a daily basis on the hobby farm, trail or fishing trip. And all of this comes with the industry-leading Kawasaki STRONG 3-year warranty.

Kawasaki Heavy Industries, Ltd. (KHI) started full-scale production of motorcycles over a half century ago. The first Kawasaki motorcycle engine was designed based on technical know-how garnered from the development and production of aircraft engines, and Kawasaki’s entry into the motorcycle industry was driven by the company’s constant effort to develop new technologies. Numerous new Kawasaki models introduced over the years have helped shape the market, and in the process have created enduring legends based on their unique engineering, power, design and riding pleasure. In the future, Kawasaki’s commitment to maintaining and furthering these strengths will surely give birth to new legends.

Kawasaki Motors Corp., U.S.A. (KMC) markets and distributes Kawasaki motorcycles, ATVs, side x sides, and Jet Ski® watercraft through a network of approximately 1,100 independent retailers, with close to an additional 7,700 retailers specializing in general purpose engines. KMC and its affiliates employ nearly 3,100 people in the United States, with approximately 300 of them located at KMC’s Irvine, California headquarters.

Kawasaki’s tagline, “Let the good times roll.®”, is recognized worldwide. The Kawasaki brand is synonymous with powerful, stylish and category-leading vehicles. Information about Kawasaki’s complete line of powersports products and Kawasaki affiliates can be found on the Internet at www.kawasaki.com.