Riding in dirt or water

— The original all-terrain vehicle By the staff of Dirt Wheels — 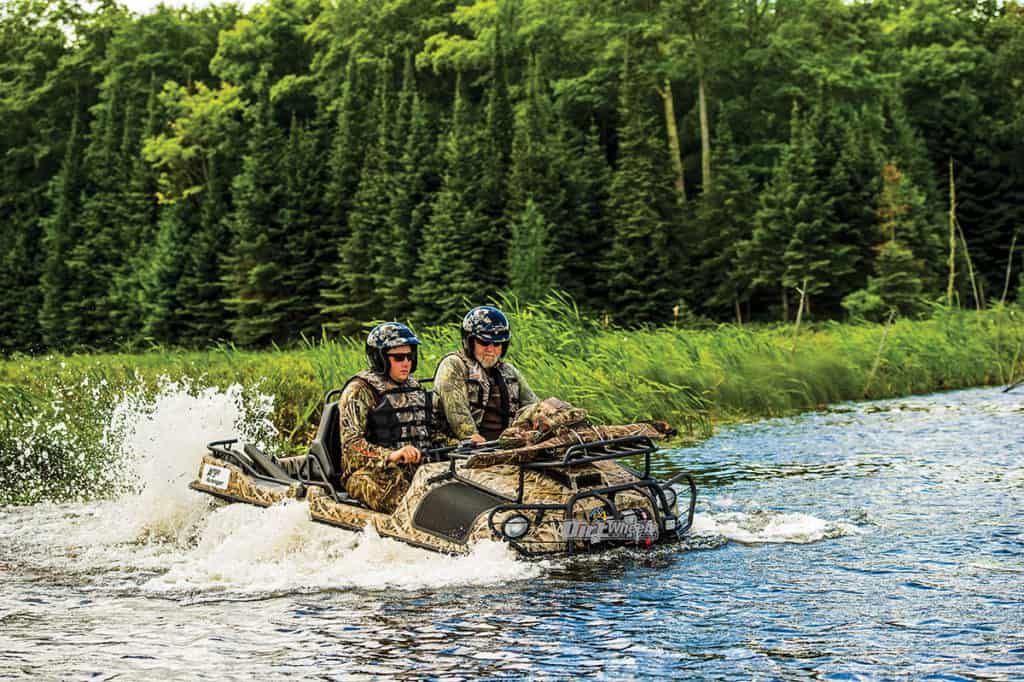 Before the UTV was conceived, there was a company called Argo. Argo created the first all-terrain vehicle (ATV) and, arguably, the first UTV. They might look very different than what we consider ATVs and UTVs these days, but Argo just launched their new line of quads. However, their original machines have always been in a class all their own—the Argo amphibious line.

There have been companies that have tried to go the amphibious route, but none have topped what the Argos can do. It all started back in 1967 when Ontario Drive and Gear (ODG) built the first one. Fifty years in the making and they’re still the top amphibious go-anywhere, do-anything rig we’ve seen. The Argos are true all-terrain vehicles compared to any vehicle out there. Our associate editor, Colt Brinkerhoff, always wanted to drive one as a kid, but no one he knew had one. I’m sure that’s been the same story for a lot of us, but now they’re focusing on helping their dealers get the Argo ball moving across the states.

For 2018 Argo made some changes to their xtreme-terrain vehicle (XTV) lineup. They decreased how many models they needed and focused on making the ones that stayed even better than before. They also have two transmission offerings: the classic and the admiral transmissions. Each Argo amphibious model shares the same high-density polyethylene (HDPE) all-terrain body, which is perfectly shaped for buoyancy. They can all withstand extreme temperatures—from -40 degrees to 104 degrees Fahrenheit. What is the best feature of an Argo besides going in the water? They have a zero-degree turning radius! That’s right, turn the handlebar and the torque will be taken from either the left or right side of the machine and transferred to the other, giving it incredible turning. If you could imagine operating a skid-steer with a handlebar, that’s what it’s like.

The Frontier 6×6 SE and Frontier 8×8 S are the cheapest models at $10,999 and $16,999 for the Frontier 8×8 S. The 6×6 and 8×8 feature a Kohler Command Pro air-cooled, 747c,c V-twin engine that produces 23 horsepower. They both come equipped with the classic transmission that offers forward, neutral and reverse. A CVT belt-driven transmission maximizes engine power to the classic transmission. Other standard options include a bilge pump, 24-inch low-pressure propulsion tires with steel rims, and an entry step that provides easier entry into the vehicle. Top speed for both vehicles on land is 22 mph and 3 mph in the water for the 6×6, while the heavier 8×8 climbs only to 19 mph on land and 3 mph in the water.

The 6×6 SE holds four people on land and two people in the water, while the 8×8 can hold six people comfortably on land and four in the water. Load ratings for the 8×8 are obviously higher with a load capacity for water at 810 pounds, while the smaller 6×6 can handle 440 pounds of load capacity. The 6×6 has a tow rating of 1200 pounds, while the 8×8 comes in at 1400 pounds. Ground clearance for both machines come in at 9.5 inches with tires and 10.5 inches with the optional tracks option. There are two color options for these models—black and green.

The 6×6 Scout S shares the same air-cooled V-twin engine as the lower-priced unit, but the 8×8 Scout S gets a Kohler Commander Pro liquid-cooled V-twin engine that produces 26 horsepower. The Scout S models also offer the classic transmission with a standard and high-torque gearing option for extra low-end grunt.

Both models get a standard 3500-pound Warn winch with a full bumper to protect it and the lights. They also get updated seats that are plusher. Water-load capacity decreases with the 6×6 coming in at 360 pounds and the 8×8 at 730 pounds. The color options also got upgraded with Break-Up Camo and Shadow Grass Camo.

The 6×6 ST Limited and 8×8 S Limited Editions have all the same great options as the Scout S, but with updated colors and the high-end admiral transmission. There are two options as far as colors go—green and orange. Argo’s admiral transmission adds a higher gearing ratio all the way around. The 6×6 Limited version retails for $16,499 and the 8×8 Limited version retails for $18,999. All the Frontier models feature mechanical brakes that are operated by the left-hand lever on the handlebar, and the steering brakes are hydraulic.

The Avenger 8×8 models from Argo offer the 30-horsepower Kohler Aegis V-twin, liquid-cooled engine paired with electronic fuel injection. All of the Avenger models come standard with the admiral transmission. They also get a hydraulic brake upgrade for the hand lever on the handlebar. Towing capacity is greater on the Avenger models at 1800 pounds. Besides the LX model, the Avengers gain 1 mph over the regular 8×8 models for a total of 20 mph on land.

The lowest-priced Avenger would be the 8×8 ST model, which retails at $24,799. It features upgraded 25-inch tires with steel rims and a new QT quiet muffler, which reduced the sound output by 9 decibels. The load capacity for water is also improved at 920 pounds over the Frontier 8×8 SE, which can carry 810 pounds. The base-model colors are green and black.

The Avenger 8×8 STR model retails for $26,799, and for the extra money spent, this machine gets upgraded aluminum beadlock rims that allow the riders to drop the tire pressure lower than with the standard steel rims. Lower pressure means greater traction in the muck and water. But, the load capacity for water drops down to 895 pounds on this model. Like the ST model, the STR only comes in black and green.

The 8×8 ST LE Avenger has the same water-load capacity numbers as the Avenger ST, but this model gets upgraded colors and a standard 3500-pound Warn winch, along with the front brush guard. Steel rims show back up on this model, but that’s what gives it a larger hauling capacity. It also gets a high-back seat that is more comfortable. The ST LE comes in green or orange. It retails for $26,799.

The LX version is a higher-end model that has the highest top speed on land at 25 mph. It offers a marine-grade, 40-watt, Jensen, four-channel Bluetooth sound system that also has AM/FM stations. It comes with the aluminum beadlock wheels, but the load capacity for water is the lowest in the Avenger family at 850 pounds. The premium seats are more comfortable in this model, and it’s only offered in a Cranberry Red color. It retails for $27,099.

Now for the big dog, the Conquest 8×8 Outfitter XTI. This machine will literally haul an entire moose if need be. It features the same Kohler Aegis gas engine as the admiral line, but gets an HD transmission for heavy loads or pulling. Along with that, an HD drive bewlt comes standard for belt longevity. Towing capacity gets bumped up to 2000 pounds and the load capacity for water is 790 pounds. It has a more sinister look to it than the other models and has upgraded dual high-powered front LED headlamps and floodlights. To power all the new accessories, a 60-amp alternator is added. A 4500-pound Warn winch is added, and a rear receiver winch kit with wiring is also standard.

The Conquest is slower than the rest with a top land speed of 17 mph and 3 mph on water. Ground clearance is also lower at 9 inches with tires and 10 inches for the tracks option. The Conquest 8×8 Outfitter XTI retails for $34,999 and comes in Break-Up Camo and Shadow Grass Camo.