Beau Baron returned to the top step of the Pro ATV podium during the Rocky Mountain ATV MC WORCS Series presented by Polaris RZR and Dirt Wheels’ second visit of the season to Crazy Horse Campground. Fourteen-year-old Braxton Grosse kept his winning streak alive by finishing first in Pro-Am. The race was round three of the series.

The event was held on the notoriously challenging Lake Havasu track. Marking the series second visit to the circuit this season, WORCS officials further refined the Lagoon Jump from the first round. Deepening the channel made it so racers either had to send it over the jump or take the long way round. In addition, a sand hill climb was added for the Pros, which played heavily into Baron’s victory.

In Pro ATV, Mike Sloan snagged the holeshot but elected to go around the Pro section on the first lap. That was all Baron needed as he sailed up and over the hill taking the lead for good. From there, Baron dominated on his Honda, winning his second race of the year. Jarrett Curley was second on his Honda, ahead of the Yamaha of Logan Huff. Sloan’s Yamaha threw a chain later in the race and he finished eighth. “Sloan decided to go around the Pro section on the first lap and I went for it,” said Baron. “Once I got to the top of the hill I was in front. I got a pretty good gap going when he threw a chain and that gave me a pretty good lead.” 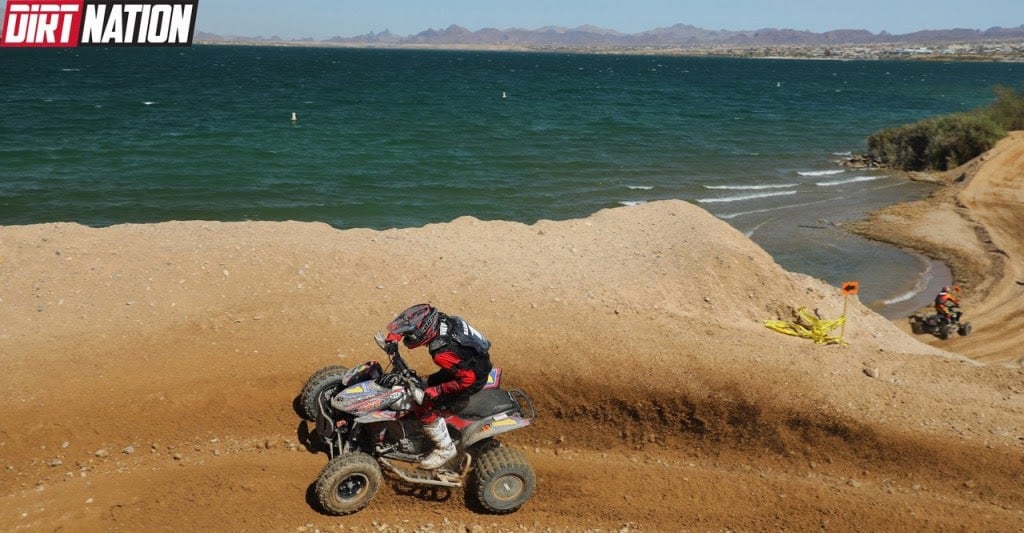 Curley was in survival mode right from the start. Running a conservative pace early in the 75-minute event, he started clicking off faster laps later. The runner-up effort marked his first WORCS Pro podium. “We connected it and made it our weekend,” said Curley. “I was following Logan and everyone started falling out. I picked up the pace and started clicking things off later in the race.”

Huff experienced electrical issues on his quad right at the start. With the bike sputtering at times, he pitted on lap three and determined he would have to fight it out. Strangely, the rough course seemed to beat the bike back into competitive trim and he finished third. “I definitely had no idea this was going to happen,” said Huff. “I had a mechanical issue halfway through the first lap. On the third lap I came in, and found it was an electrical problem. Luckily we finished today and it’s nice to get back on the box again.”

In Pro-Am, Grosse continued his assault on the record charts by scoring his third consecutive win on his Honda. He was so fast in fact that he finished second overall on adjusted time, just behind Baron. Alex Ortiz was second on his Yamaha, ahead female racer Torey Matajcich. 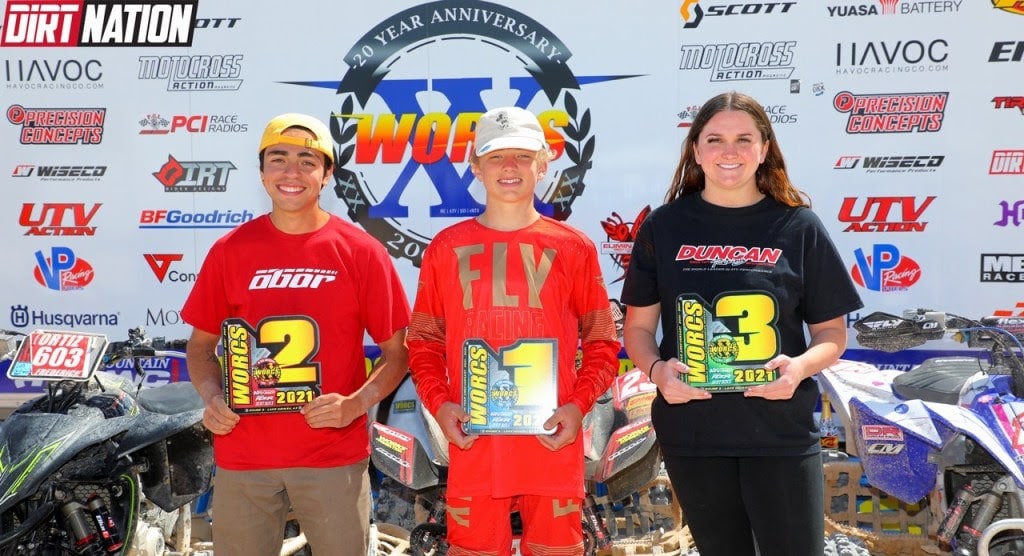 Grosse is demonstrating this year how well the WORCS ladder system works. At just 14 he has stepped it up this season and got in his digs on one of the older riders on the podium “It feels good, especially because I used to look up to Alex and now, I get to beat him,” quipped Grosse. “I got the holeshot and went around the Pro section. I came around the corner and there was Braden Schoeffel in the lead. So, I latched onto him. He ended up having problems and pulling into the pits so I took the lead from there.”

Ortiz should be given extra credit for his second-place finish. He crashed hard on the Lagoon Jump on the first lap and broke the subframe on his bike. Despite the hard crash, he got back up, got going again, and finished second on the ill-handling machine. “I wadded it up pretty well,” said Ortiz. “I went into survival mode and just tried to get through the race. I put in some solid laps and the last 40 minutes I got into a groove and caught Torey.”

Interestingly, Ortiz returned to WORCS this season after a five-year hiatus. He said a lot of things have changed for the better in the series. “I came back at the last round after a five-year break,” said Ortiz. “The class has changed a lot and a lot of new talent in the class. That’s good to see.”

After winning the Women’s race, Matajcich elected to see if she could show the boys something in Pro Am. She did…big time and became the first woman in recent years to podium in the class. “I saw a lot of people were breaking, but I wasn’t sure I’d make onto the podium,” she said. “Once I started passing everyone, I thought I had a chance.”

The ATV classes will be back in action April 9-11 at Honolulu Hills Raceway in Taft, CA.