Back in 2002, Kawasaki introduced their 360cc Prairie to the public. After the first test, we were very pleased with the capabilities of this mid-sized Ute. It featured a torquey motor with a smooth ride and 4X4 with differential lock capabilities. More than five years later, the little Prairie is still one of Kawasaki’s favorite utility machines. In fact, they have made changes only to the cosmetics over the years. Here is the 2008 Kawasaki Prairie 360 4×4. 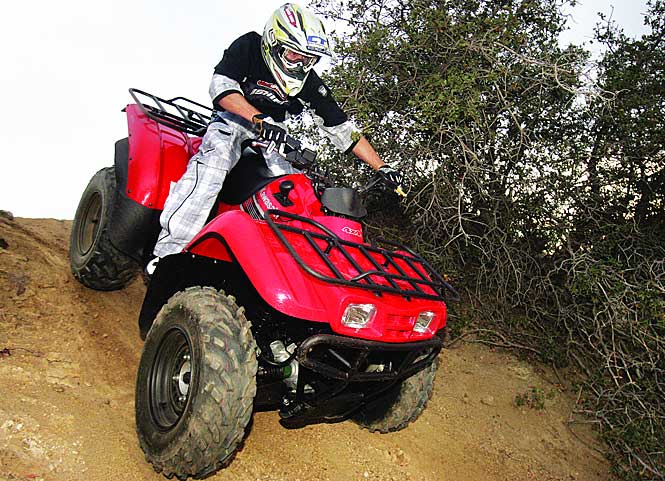 WHAT DO YOU GET?
The Prairie 360 is powered by a 362cc, SOHC air-cooled, two-valve four-stroke engine with a shaft-drive system that drives two or four wheels. The Prairie is brought to life by the push of an electric start button. The 360 is also equipped with a backup recoil starter. Thanks to an automatic compression release in the engine, it pull starts just as easily. The 360 4×4 does not put out a big growl like its V-twin brothers but it does have a healthy yet quiet rumble. The Prairie 360 is put in motion by an automatic CVT transmission. This transmission has been running strong for years without an issue.
The gear selection is simple and should not cause confusion. The selector is located on the right side of the front plastic, out of the way. The Prairie has a snappy throttle response and the belt in the CVT grabs traction almost as quickly without any noticeable lag.
It is definitely not a hair-raising machine like the V-twins, but the 360 has good acceleration for a two-valve motor. It quickly tops out at 45mph, which is right on par with the other mid-sized Utes.
What the Prairie was lacking in top speed, it made up for in low and mid range torque. Our test area consisted of some very steep and rocky terrain, and the little Prairie pulled up all of it just fine. We never needed low gear, but it is great for riding through mud. The engine’s torque and differential lock got the Prairie out of any muck on the first get-go. The shifter stayed in high the rest of time. 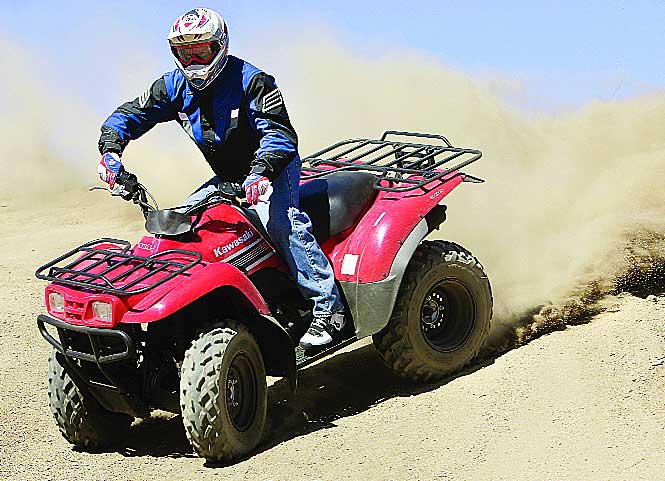 Stick the Prairie in 2WD, and you can whip around corners with ease!

SUSPENSION & MORE
The front suspension is by McPherson strut with 6.7 inches of travel. A preload adjustable single shock and swingarm travels an even seven inches in the rear. Suspension on the Prairie is good all around. As fast as you wanted to ride, the suspension had no problems soaking up trail obstacles to a point. When we decided to slow down, the ride comfort was still just right. On steep, loose and slippery rocks, the differential lock was once again put into service for added traction. However, other than in severe situations, we rarely used it.
Riding in two or four wheel drive was enjoyable and there is virtually no feedback in 4WD mode. If you do decide to use the diff lock, the steering does become more difficult but not uncontrollable. We found that we could plow harder through loose rock with the diff lock lever slightly pulled in. This would keep the bars from wandering around and jerking upon any hard impact.
The Prairie’s 25-inch tires mounted on 12-inch wheels provide traction on the trail, while disc brakes up front and a wet multi disc in the rear bring the machine to a halt. The tires provided a good amount of traction in slick and loose terrain. To slow the machine down, a light step on the rear brake pedal would do the trick. We repeatedly climbed several long steep hills during our testing and never had the brakes fade or lose strength on the way down. 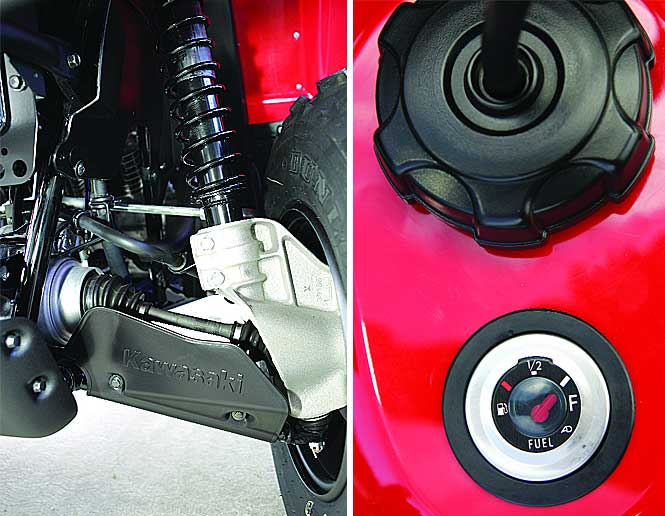 (Left) The front suspension is by McPherson strut with 6.7 inches of travel. (Right) A fuel gauge is located just below the gas cap on the tank.

SPECIAL FEATURES
The utility capabilities are provided by an 88-pound capacity rack up front and a 154-pound unit in the rear along with a standard equipped hitch capable of towing 1100 pounds. The Prairie’s handlebars feature a dashboard with a speedometer, neutral, drive and revere indicators lights, 12-volt accessory power outlet and the keyed ignition.  Located underneath the rear rack is a medium storage box. We were able to stuff it full of tire repair kits, water, and other trail accessories. The Prairie 360 also features full floorboards with adjustable foot pegs connected to the fenders that provide a solid footing and splash protection. The front of the Prairie features dual 30-watt halogen lamps lighting the trail. You can also ride for hours without fueling up thanks to the Prairie’s 3.6-gallon fuel tank.

BUY IT?
The Kawasaki Prairie 360 4×4 is a great ATV. Plus, at $5199 it is an affordable way to a whole lot of fun. Also, if you are looking for an even more affordable means, Kawasaki offers the 360 Prairie in a non-4WD for only $4599. The Prairie 360 4×4 can be used for a multi-purpose workhorse around the homestead, or you can cut it loose for the trail. Its 4WD capabilities are awesome for a mid-sized utility vehicle. Heck, you can even take this thing though mud, thanks to its torquey powerband. The suspension and handling is top notch and provide a safe and smooth ride as well. Kawasaki did a great job with this machine back in 2002, and it will continue to be a well-balanced high quality ATV for years to come.