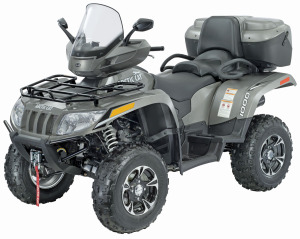 ARCTIC CAT TRV1000 LIMITED ($12,999)
It’s up to you; you can either strengthen your marriage
or destroy it with the TRV1000. The flagship of the Arctic
Cat two-up models is the 951cc TRV, which is only delivered
in Limited trim. That gives you the passenger accommodations
in addition to a fairing/windscreen combo,
power steering, a travel trunk, hand warmers, mirrors, a
winch, and upgraded wheels and tires. 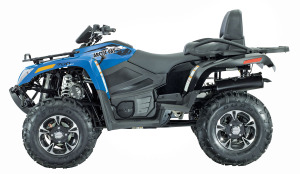 ARCTIC CAT TRV700XT ($10,999)
Arctic Cat gives your passenger a raised seat for a view
ofwhat’s coming, aswell as a cushy backrest and grab handles.
In case it doesn’twork out between you and your other
half, you can convert her (or his) former space to either an
optional rack or a cargo box. The 700 is also available in
Limited trim, with the windscreen and the travel trunk for
$11,999—just like the 1000 butwith the single-cylindermotor. 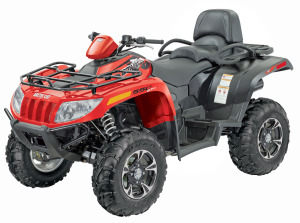 ARCTIC CAT TRV550XT ($10,199)
The TRV550 give you all the same passenger features of
the bigger Arctic Cats—in fact, it’s built on the same chassis
with full power steering. The only difference is the motor,
which displaces 443cc. The wheelbase is 8 inches longer
than that of the single-riderArcticCat, giving the passenger
plenty of room—or not, if you choose to install the optional
rear rack or cargo box. The Limited version is $11,199. 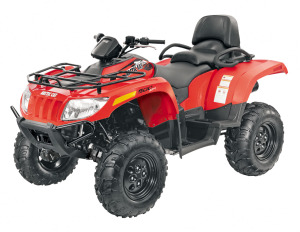 ARCTIC CAT TRV500 ($7999)
If you want to impress your passenger, tell ‘em power
steering is for kids and the TRV500 is for real men. You’ll
impress everyone and save a bundle. The 500 comes with
the 443cc motor and is only available in core trim, which
means you don’t get power steering or the flashy paint,
wheels, winch, etc. You get the same basic chassis, and
the passenger accommodations are just as cushy. 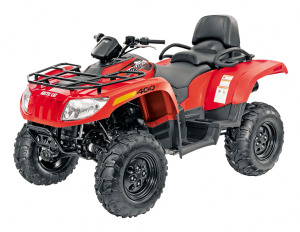 ARCTIC CAT TRV400 ($7649)
This is the bargain of the Arctic Cat two-up line. It has a
simple but reliable air-cooledmotor with a carburetor and
366cc of displacement. In case you’re wondering what
happened to the TRV450, this is it. Arctic Cat renamed it
last year. The chassis is almost the same as those of the
larger TRVs, with a 58-inch wheelbase and fully convertible
passenger/cargo provisions. 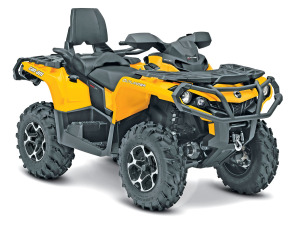 CAN-AM OUTLANDER MAX 1000 DPS ($12,499)
The king of the Can-Am two-up line has the longest
wheelbase in the ATV world at 59 inches. It gives its queen
a redesigned backrest with a little more flex. The cargo
racks are redesigned this year and have a no-slip surface.
You can convert the Max from two-up to single-seat mode
quickly, giving you more storage space. The XT is $13,099
and the flagship XT-P version is $15,099. 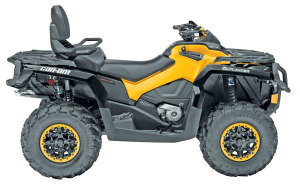 CAN-AM OUTLANDER MAX 800R DPS ($11,449)
Like the 1000, the most basic version of the 800cc two-up
Can-Amstill has power steering. TheDPS package also gives
you 12-inch castwheels and the quick-engagement version of
the Visco-Loc locking front differential. If you choose to
upgrade to theXT package, you get differentwheels and tires,
plus a 3000-pound Warn winch with a wired remote control.
The XT-P has upgraded shocks and sells for $14,049. 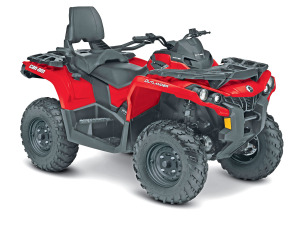 CAN-AM OUTLANDER MAX 650 ($9699)
If you have big, burly arms, Can-Am will let you buy
the 650 Max without power steering. It has the same chassis
as the other Max models and a new passenger backrest
designed to minimize kickback. You can switch to single-
personmode, and the redesigned racks will work with
BRP’s Linq system for attaching accessories. The 650 is
available in three levels, topping out with an XT. 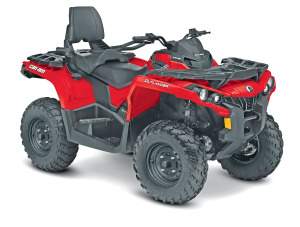 CAN-AM OUTLANDER MAX 500 ($8799)
Can-Am’s 500cc Outlander Max is virtually indistinguishable
from the larger models, using the same double-
A-arm SST Generation 2 chassis. The Rotax V-twin motor
even looks the same, differing only in displacement. The
base model of the 500 has no power steering, but that can
be had on the next version up for an additional $900. The
XT has that and more for $10,299. 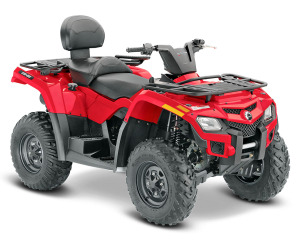 CAN-AM OUTLANDER MAX 400 ($7649)
The 400 is based on the older Can-Am Outlander chassis,
which uses MacPherson struts in front rather than
double A-arms. It has a liquid-cooled, single-cylinder
Rotax motor that produces a claimed 32 horsepower. The
passenger seat and backrest can be removed easily to
increase cargo space, in case you said the wrong thing at
dinner. There is an XT version for $8699. 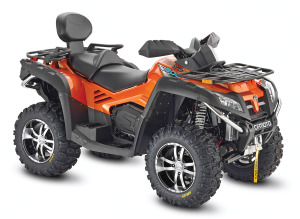 CFMOTO C-FORCE 800 ($8399)
CFMoto is a Chinese company that’s small in the U.S. but
well-known in Europe and Asia. The C-Force 800 is the company’s
top-of-the-line ATV, and it has all the features of a premiumtwo-
upATVatanexcellentprice. The 800ccV-twinmotor
is similar to a Rotax 800R and produces a claimed 61 horsepower.
In standard trim, it comes with high-end features like
power steering, automotive paint, alloywheels and awinch. 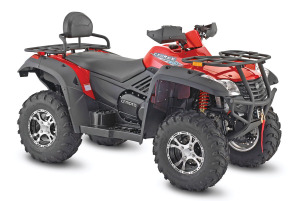 CFMOTO C-FORCE 600 ($6499)
The 594cc version of CFMoto’s two-up ATV is downsized
in most ways. The motor is a fuel-injected, single-cylinder,
SOHC four-stroke that is said to produce 33 horsepower.
The wheels are smaller, and you don’t get top-end paint,
but it still has standard features that are usually
upgrades, like alloy rims and a 2000-pound winch. The
price makes it the most affordable two-up on the market. 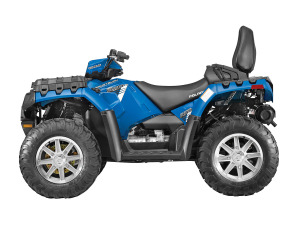 POLARIS SPORTSMAN TOURING 850 EPS ($10,999)
Polaris gave all its premium Sportsman 4×4 models
power steering as standard equipment this year, and the
Touring 850 is about as premium as it gets. The wheelbase
is only 4 inches longer than that of the single-seat
Sportsman, but the passenger still gets posh surroundings
with suspension built into the rear seat. The Bronze Mist
LE model gives more upgrades and sells for $13,399. 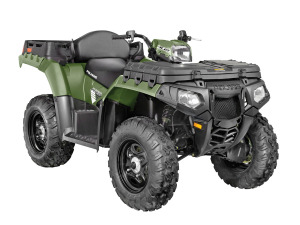 POLARIS SPORTSMAN X2 550 EPS ($9699)
When you get fed up with people and want to run
away, the X2 is willing to be your only friend. It converts
from two-up to solo in seconds and gives you a 400-pound
dump box where the passenger used to sit. You also have
enclosed storage for 8.2 gallons of Wilson soccer balls
with faces (or whatever) in front. For 2014, electronic
power steering comes as standard equipment. 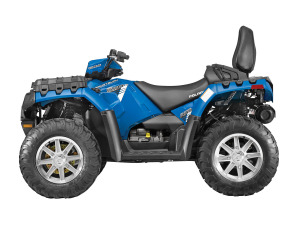 POLARIS SPORTSMAN TOURING 550 EPS ($9299)
Like the 550 single-seater, the Touring two-up version
gets electronic power steering as standard equipment for
2014. You get a front storage compartment below the rack
with 8.2 gallons of space. If you want to go solo and gain
more room for stuff, you can remove the passenger seat
and install an optional Polaris Lock & Ride accessory box
with 2.5 gallons of space. 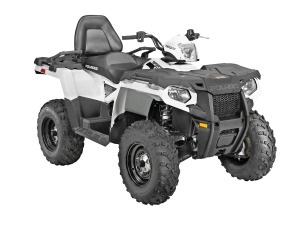 POLARIS SPORTSMAN TOURING 570 EFI ($7699)
It isn’t often that a company offers its newest motor in a
budget-oriented machine, but that’s what Polaris did with
the Touring 570. It has the 44-horsepower 570 motor in a
MacPherson strut chassis, similar to that of the older 500.
The bodywork is slimmer andmoremodern than the 500’s,
and it has more range thanks to a larger, 4.6-gallon tank.
A power steering version isn’t available. 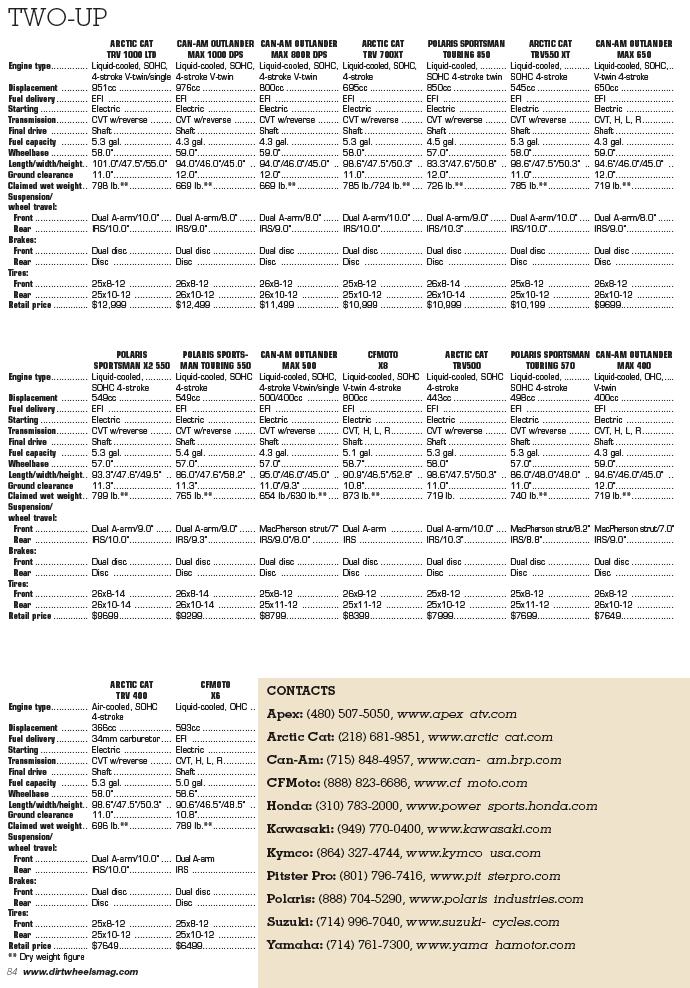