— The future of ATV racing? By the staff of Dirt Wheels —

With the decline of sport quad production and the rise of models that were never built for production, like the Rath Racing CRF250R/TRX hybrid we included in the December 2016 issue, it’s looking like the production rules for quad racing will eventually go away. In the mid to late ’90s there were the “outlaw” quads that had custom frames with better geometry and modern dirt bike engines. Closer to the early 2000s, four-stroke technology started to catch up to the popular two-stroke machines, and that kick-started the hybrid ATV movement.

Frame builders and even garage mechanics started stuffing YZ400F and a variety of other engines into TRX250R geometry frames. The new four-stroke engines were pumping out some serious torque and had horsepower rivaling or surpassing modified production two-stroke quad engines, blowing the doors off the mighty 400EX. For quads, this was a turning point in what they would eventually become, and manufacturers eventually answered the call with new-age production models.

It seems odd to think that the sport ATV market is in the slump that it’s currently in when it had its greatest years starting in 2003 with the LT-Z400 and following that with the YFZ and TRX450R in 2004. Now here we are with Yamaha being the last game in town for production sport ATV models. We keep hoping that companies like Honda, Suzuki and KTM will jump back in, but currently, that’s just a dream. However, ATV racing will persevere like it has in the past, but for now, it will go back to the grass roots and more self-built racers will emerge.

From what we’ve learned from the past, it’s time for a new age of outlaw quads and hybrids to start making an appearance in the racing scene. One of the companies ready for the change is Rath Racing. We had a serious discussion with owner and pro rider Daryl Rath about building a quad with a KTM or Husqvarna 450 four-stroke engine back in September 2016. He took the bait and created this KTM 450SX-F Factory Edition hybrid quad! 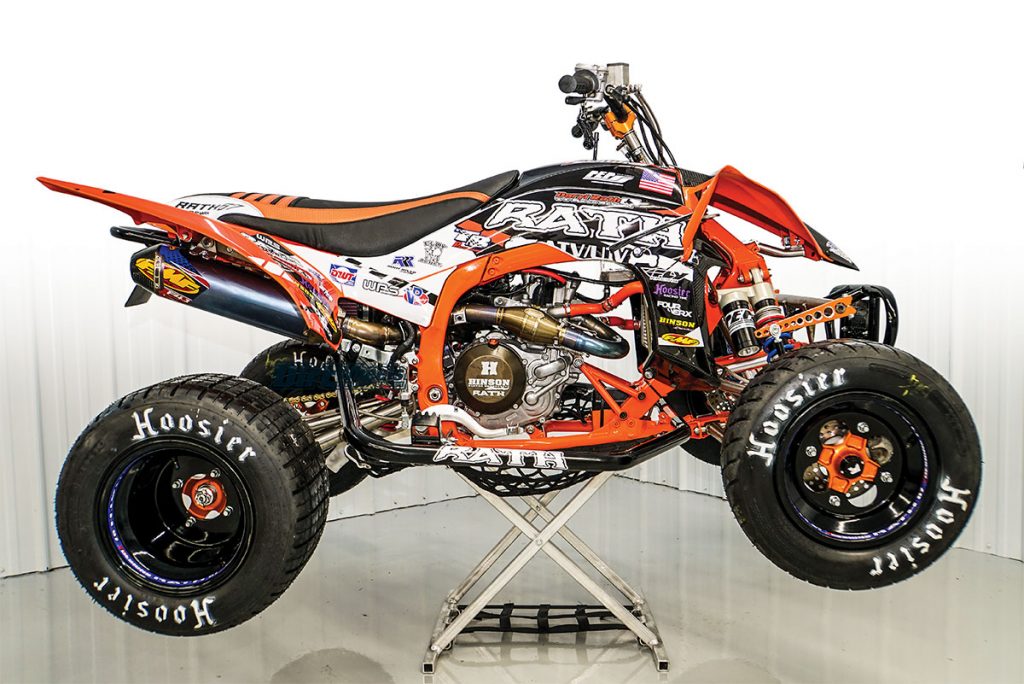 NOTHING WAS SPARED, INCLUDING WEIGHT

Because Daryl loves the Yamaha frame geometry, he started out with a YFZ450R donor frame that he acquired from one of his sponsored pro riders. It turns as well as the Suzuki LT-R450 and has a light aluminum frame. Also, being that it is still being produced, there are no issues with parts supply. With a chassis to base the project on, Rath Racing went big and purchased a brand-new 2017 KTM 450SX-F Factory Edition dirt bike. The reason for that is that the 450SX-F FE engine is one of the lightest and most potent engines on the market. Daryl kept the engine, wiring harness and hydraulic clutch assembly, then he sold the rolling dirt bike chassis. He then created all the necessary engine mounts to cage the orange animal.

Rath’s goal was to keep the quad light, with an end goal around 300 pounds wet. They say that losing 10 pounds is like gaining one horsepower, and when racing, the more power, the better. To achieve this feathery weight, he built titanium A-arms, a titanium swing-arm, titanium steering stem, titanium front sway bar and a titanium linkage. The other Rath Racing parts are made from aluminum, like the 1.5-gallon fuel tank, bumper, grab bar and his TT nerf bars. Other lightweight parts came from Fourwerx Carbon, like their carbon fiber hood, radiator shrouds, tank cover and titanium front fender hardware. The KTM engine is incredibly light at 58 pounds compared to the Yamaha engine that comes in at 76 pounds.

According to KTM, the 450SX-F FE engine pumps out 52 horsepower to the rear wheels. In comparison to the 2017 Yamaha’s 40 horsepower to the rear wheels, that’s a big jump, especially in a stock-for-stock comparison. To gain even more horsepower, Rath fuels this monster with VP’s MXR02, which delivers 7 percent more power than pump gas, but it has a steep price tag of $167.76 for a 5-gallon pail. The KTM Factory Edition electrical system also comes with a fuel mapping system that can be changed on the fly by a handlebar-mounted switch. That switch also activates traction control and launch control for enhanced traction for the start, middle and end of the race.

A full-titanium FMF exhaust with a carbon fiber end cap was modified to work within the YFZ-R frame. It reduced even more weight and gave the KTM engine a more linear powerband. The KTM fuel injection offers a 44mm throttle body that gives a smooth power delivery and instant throttle response. ROBL Engineering created a carbon fiber intake system with a gauze-style filter that made tuning the engine much easier on the dyno compared to the stock YFZ-R setup. To get the power to the ground, a full Hinson BTL (Back Torque Limiter) clutch was installed, which helps create less wheel hop while cornering or through braking bumps.

TT racing, or “Tourist Trophy” racing, has a much different setup than MX or desert machines. This ATV has Hoosier TT tires installed onto DWT’s strong and lightweight A5 10-inch wheels, front and rear. The Rath titanium swingarm is 2 inches shorter than the OEM Yamaha model. Having the shorter wheelbase improves handling and allows quicker turning than before.

The titanium Rath sway bar allows the front end to stick to the ground in the corners and create less body roll. PEP built a custom set of their PB-1 shocks for the build. Some straightaways to corners are around 60+ mph, and the PB-1 shocks are built shorter for this TT quad, so there is less travel to screw up the handling.

THE MOST POWERFUL STOCK ENGINE WE’VE RIDDEN ON

Daryl Rath built a full TT practice track behind the Rath Racing shop in Hutchinson, Minnesota, and that’s where we got a taste of what this machine is like. The quad sits very low to the ground, but it was a good feeling knowing that the lower center of gravity would help us maneuver around the track. Even though the KTM bikes have a small 12-volt lithium battery, it still started very quickly and easily.

With its first snap of the throttle, it was apparent that this was one of the most powerful sport quads we’ve ever tested. The power from the KTM FE engine is smooth as silk, but if you wanted more of it, there was plenty on tap. It has explosive power on the starts and hooks up extremely well when we activated the traction control and launch control on the handlebar switch. With launch control turned off, it was full power, and it didn’t care if you wanted to wheelie or not. Through every single gear the Rath Racing KTM hybrid just kept climbing through the mph and rpm. It had us smiling from ear to ear every time we got on the throttle.

The handling was better than we expected, and that’s saying a lot with the YFZ-R geometry. We could easily handle turns at speeds that we were comfortable with, and it would track through with ease. This was confidence-inspiring and made us turn quicker lap times with each pass. The power combined with the sticky Hoosier tires gave us immense traction when blasting into and out of corners. With how light the machine was and the smooth power delivery, we didn’t get fatigued quickly compared to production machines. Another reason was how well the PEP shocks were tuned to make the hybrid float over chatter and braking bumps easily. We were thankful that this machine had the Fourwerx Wave seat cover to help keep us on the seat!

Daryl Rath has done it again. He and his team of fabricating wizards built an incredible steed that rivals anything we’ve seen or ridden. Remember how we spoke about the 300-pound mark? Well, the Rath Racing crew was just shy of that at around 305 pounds wet. For comparison, the 2017 KTM 450 SX-F Factory Edition weighed in at 221 pounds without fuel. If these new-style hybrids are the future of ATV racing or production models, we’re all in!