A true Team Greenie builds a masterpiece By the staff of Dirt Wheels Photos by Papperazzi Imaging and Films/www.papperazziimagingandfilms.com and Karel Kramer

Albert Tranghese barely missed the three-wheeler era, but embraced quads in general and Kawasaki quads specifically as a teen. His first machine was a 1988 Kawasaki Tecate 4 two-stroke. As hard as that was, Tranghese remained loyal to Team Green, aside from 2005 to 2007. He felt the KFX400 was no longer competitive, so he raced Honda TRX450Rs.

As you can imagine, it was good news for Tranghese when Kawasaki entered the 450 class in 2008 with the first KFX450R. The model remained in production until 2014. Unlike some other brands, the KFX450R was narrow for trails, and it was the only Japanese 450 sport quad with reverse. It was designed to be agile in the woods, and that suited Tranghese’s riding style. He found the KFX was nimble and felt lighter in the air than other brands.

With the help of Baldwin Motorsports, the KFX450R motor was competitive right from the start. While the KFX engine has a family relationship to the KX450F motocross engine, it is quite different. It was fuel-injected, while the KX (and KLX) were still carbureted in 2008. According to Tranghese, the KFX had a much beefier transmission.

Unfortunately, the KFX450R’s arrival coincided with the collapse of the housing market and resulting in a recession. The KFX450R never sold in huge numbers, though it did stay in the Kawasaki lineup until 2014. Kawasaki may have given up on the KFX, but Tranghese never has. Since 2008 he has owned at least 20 KFX quads. Four of those have been his personal track and race machines. The rest were restorations that are part of his one-man crusade to keep the meanest green quad alive. He has even started to develop parts that make it easier to keep a KFX working well and feeling fresh, and has a website supporting those products.

This latest build is the most modified and farthest from stock of the four track quads he has built. For a time there was a factory Kawasaki race team campaigning the KFX450R. Many exclusive products were developed for the machine that made it a significant threat for MX racing. Tranghese has made it a mission to chase down those Team Kawasaki special parts that remain.

He insists that Kawasaki has very good parts support for the KFX for those who plan to keep them stock. The aftermarket runs on numbers, though. If it takes too long to sell through a specialized part, when they are gone, there is no motivation for the builder to produce more. Many of the modifications to this stunning KFX are the last part of its kind or close to it. Some of the companies still have parts for the KFX, but they are not “Team Kawasaki” spec, or are as far from stock as this machine is.

Many of the most custom modifications are to reinforce the bike or to arrange the ergonomics to Tranghese’s liking. In his opinion the KFX seat is high and the handlebar is low. PRP Racing out of New York made the subframe and the swingarm. Now the seat is 3 inches lower at the grab bar. Up front the handlebar is farther back and 30mm higher at the grips.

Tranghese also has his reasons for the PRP-fabbed swingarm. He has broken stock ones, so the PRP version is stronger. From the front pivot to the linkage, this swingarm is dimensionally Kawasaki. From the linkage to the rear axle, the swingarm is Honda. Everything on the back axle is Honda. Not many guys race the Kawasaki. If Tranghese has a problem at the track, it is probable that he could find some Honda parts if needed. Honda’s rear caliper is a performance upgrade, but the rest is for convenience. There is vastly more aftermarket support for the Honda rear, so it is much easier to get parts and in more variety. The rear uses stock Honda TRX hubs as well.

The DWT wheels have very little offset to keep the ball joints in the center of the rim. That choice maintains a legal width, eases bump-steer, and minimizes the load on the wheel bearings and ball joints.

Kawasaki Monster Energy Team race quads used a special Roll Design front end with A-arms that are +1 inches and keep the track 50 inches wide. Those A-arms mate with Team spindles made by Kawasaki for these special Roll Design Team A-arms. Neither the spindles nor the A-arms were ever made for the public. Baldwin made a few front hubs like these, but they are no longer available. All A-arm hardware is custom-made titanium race-team issue.

Rolling stock is thanks to DWT Champion in a Box wheels with bead-lock rears running ITP motocross tires. Fortunately, Kawasaki and Honda sport quads share a bolt pattern, so there is no problem with the Honda-rear, Kawasaki-front-hub arrangement.

It is fortunate that Tranghese has enough parts to build one more Team front end like this one. Now that this quad was completed, been photographed, has taken a cross-country riding and tuning trip to California and back, it is being retired.

While this quad is being retired, it will park with another motor in the frame. Tranghese only has one KFX Baldwin Motorsports Pro head. It is fully modified with internal changes. Likely Baldwin will build a KFX head, but according to Tranghese, not one like this. Likewise, Baldwin modified a stock KFX throttle body, but it runs the stock injector. The modified throttle body requires almost no effort to actuate the thumb throttle. The Pro Circuit exhaust and the Hinson clutch cover are all Kawasaki Monster Energy Team pieces. The pipe is dimensionally the same, but lacks heat-shield mounts on the header.

Inside the head are Web cams. Under the head are a Wiseco piston. It uses a stock crank with a CP Carillo rod for strength. Everything in the bottom end and transmission is either cryo-treated or micro-polished. Under the Hinson clutch cover is a full Hinson billetproof conventional clutch setup.

Tranghese completed the engine with a brand-new factory wiring harness, stator, injector and regulator from Kawasaki. Baldwin made a tether switch with a harness that had factory connectors to mate with the stock harness. It killed the fuel pump, but it is no longer available, but this KFX has one.

Garrett Torres from Fuel Customs spent a lot of time optimizing the intake system. It uses a Fuel Customs intake boot mated to an ‘06-or-newer Honda TRX lower airbox. Another trick but unobtainable part is the oversize, true cross-flow GMX radiator from England. It has an integrated oil cooler as well. It is a sweet piece, but the company no longer makes ATV products.

Tranghese employs a Magura tapered Fatbar fitted with a Braking radial-style master cylinder like the Kawasaki Team used. This particular model is no longer available, but street bikes and Supermoto machines still use them, so something similar is available from Braking. The bar also has a Works Connection EZ clutch perch.

And remember, the throttle body has almost no thumb resistance. It is easy to use, but is not for beginners, especially with an engine making this much power.

Tranghese Designs parts show up as well with the logo-engraved throttle cover. The machine uses a Roll Design stem, but it is supported by bearings top and bottom, but that rebuildable lower stem bearing plate and upper stem bearing plate are Tranghese Designs products. The upper steering-stem clamp is larger in diameter with a self-lubricating plastic sleeve for the steering stem.

Tranghese also makes a billet, oversize seat-retainer button. It is hard-anodized to keep the seat attached under loads. His seat and subframe modifications do put a load on the seat-tank junction, so the button is especially helpful. He also sells seat pins and receptacles for the rear of the seat.

Tranghese is involved in the graphics, but not Al Tranghese. Instead, his son Al Jr. came up with a design that was brought to life by Aggressive Graphics. Both Trangheses say the company was great to work with. Aggressive does custom kits if you want them.

The Elka shocks came from Roll. When you get Elkas from Roll Design, they come with custom settings for the suspension. They are dialed in to your specification. Once Tranghese completed the machine, he hit the road for Roll Design in California. After the initial test ride, Roll matched the spring pressure and length. After another day of testing, there was a spring change, and the front shocks were extended 6mm. Finally, Roll came up with new shim stacks somewhat close to what Joel Hetrick runs.

So, the shocks were custom for Tranghese to start, and then Roll made three changes, including spring changes, valve stacks and shock length. The final settings are dialed for the shocks to work with all adjusters fully open.

Al Tranghese is an acknowledged expert on the Kawasaki KFX450R with information gleaned from many miles and hours riding, building and modifying this model. This machine is the pinnacle of his knowledge and experience. A machine with no time, labor or expense spared in the effort. Without reading the words, one look at this KFX would let you know that this is a KFX that any fan of green machines would worship. It is a beauty, but it’s far more than a show queen; rather, it’s a true weapon wrapped in artistry. 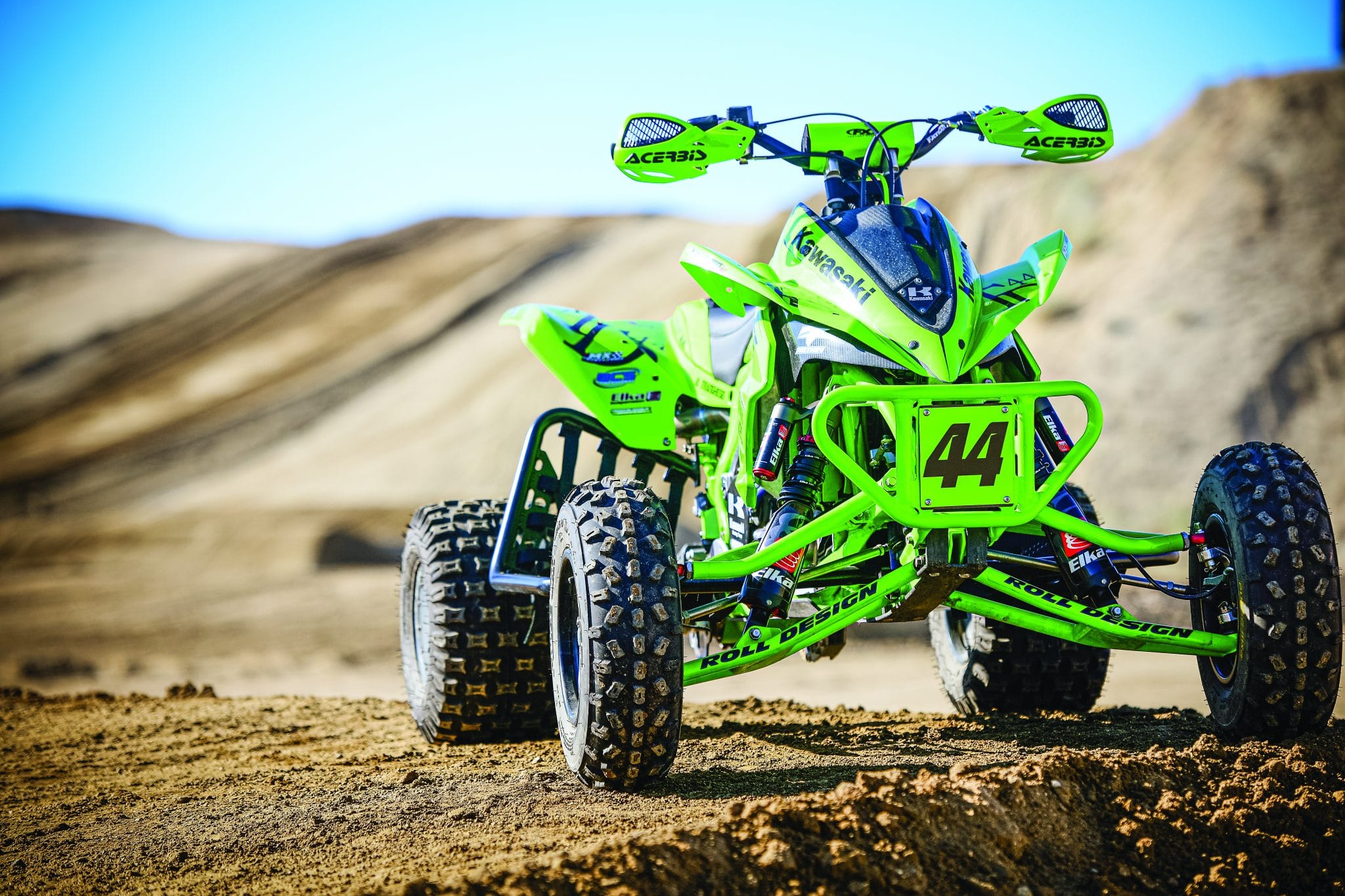 All factory OEM Kawasaki parts for the build