Pennsylvania is a hotbed of quad activity and racers. There have been many others, but three easily come to mind. Two-time ATVMX champion Joel Hetrick, seven-time GNCC XC1 ATV Pro champion Barry Hawk and 12-time GNCC WXC women’s ATV champion Traci Cecco/Pickens all hail from the Quaker State. Compared to those three, fellow Pennsylvanian Sean Shedlarski (SS) had a delayed start but is passionate about ATV racing.

In his youth, SS rode a 1987 TRX 250X four-stroke quad. That meek machine was sold off before he finished high school. Then he rode some motorcycle motocross on a KX125, but that didn’t last as Sean himself claims, “I sucked at it.”

After a health wake-up call ended with a pacemaker at 40 years of age, Shedlarski was rethinking priorities and goals. He wanted to show people it is never too late to live your dreams. In 2019, after a 23-year break, he jumped back into riding quads in his new home of California. “My cousin had a Honda TRX 250R back when I rode a quad. He let me ride it, and I was sold on the 250R. That’s why I bought one when I got back into riding.” Obviously, there were easier ways to get back into quads than buying a highly modified vintage Honda TRX 250R two-stroke. He could have bought a new quad with an electric start and a warranty, but what’s the fun in that?

He purchased the machine with the intent of sand dune fun, but soon caught the racing bug. He could have saved some time, money and trouble if he had simply bought a TRX set up for racing, but instead modified the dune weapon for a desert race.

We felt that a desert race must have been a shock for a person who grew up riding in green and forested Pennsylvania, and Sean confirmed, “Yes, it was, but I always wanted to race one.” Just a year after rejoining the sport he was fired up for WORCS GP-style racing. After racing some WORCS events he was bitten even harder by the quad bug, and by 2021 he had three TRX 250R-inspired race quads. All three have Lone Star frames. One is a hybrid with a CRF450R motorcycle engine in the TRX 250R-based Lone Star chassis. Two are powered by wildly modified TRX 250R two-stroke engines built by the late, great Rob Selvy. Selvy has been building TRX two-stroke engines since they were new. He had a great reputation as an engine builder. Unfortunately, he was a victim of COVID, and the business cannot continue without him.

A Selvy 363R race engine is a beast of a powerplant, but Sean says it is necessary to make a 1980s two-stroke 250 able to run with or beat modified 450cc four-strokes to the first turn in WORCS races. After a full season in the WORCS in 2020, Sean moved up to intermediate in 2021.

Not too long after his TRX 363R WORCS weapon was completed, he became intrigued by XTravel suspension. Shortly after investigating the company, Sean had the TRX 363R converted to XTravel. The front suspension bulkhead mount bolts on negating the need for any frame modifications. XTravel’s suspension arms are 3 inches wider and 2 inches forward compared to the standard frame.

XTravel calls the front suspension “five-link steering” and claims that it mirrors a trophy truck. It is supposed to absorb the terrain rather than sending it through the steering components and into the rider’s arms. XTravel makes a new spindle connected with Heim joints instead of ball joints. The front of the suspension arms pivot right on the centerline of the frame, but the rear of the arms mount on the side of the frame like the stock arms. It still looks like an A-arm to us, although the frame mounting points have a wider spread than stock, so they should offer more rigidity.

There may be debate on what the suspension is called, or whether the suspension arms are really A-arms or not, but the performance claims are more important. XTravel claims to have “negative steering feedback, which allows the rider to ride or race longer without having to worry about arm pump, rider fatigue or even loss of control. They also claim there is no need for a steering stabilizer to maintain control and absorb more of the track.” We rode two of Shedlarski’s Lone Star racers back to back, and there was no question in our minds (or hands) that the front suspension delivered on every claim. It is certainly smoother with less feedback into the handlebar.

The front suspension is paired with XTravel NoLink rear suspension. NoLink does require a new swingarm for the TRX. The NoLink is claimed to “allow the rear shock to travel further than a link setup, which prohibits the rear shock from extending further to gain more control and less bounce or rebound depending on the type of racing.”

A stock TRX 250R claimed 7.9 inches of front-wheel travel and 9.1 inches of rear-wheel travel. Lone Star doesn’t have travel numbers for its TRX kits, but the shock travel is 5.9 inches and what it calls the “motion ratio” is 2 to 1. So, we’d say just under 12 inches with +3 front arms. XTravel claims 13 inches of front travel and 15 inches in the rear! Ground clearance is up as well.

Since the build and the XTravel install, Shedlarski has six rough and cobby 50-minute WORCS races, plus a Glamis trip on the machine. There are still no scratches on the underside of the TRX, and he has not had to tighten any of the suspension hardware.

While the two Lone Star Racing bikes we rode have different engines, they make similar power. The TRX 363R Selvy motor machine with the XTravel suspension is clearly smoother riding with far less front-end feedback to the rider. Both machines have Fasst Flexx handlebars, but the XTravel quad has front Elka shocks and the hybrid 450 LSR quad has Axis shocks. Every rider could feel less abuse from the XTravel bike.

Shedlarski has the Selvy TRX 363R engine, a Selvy TRX 275R engine and a Honda CRF450R motocross engine in his three quads. The XTravel bike has the 363. It is the one that Shedlarski races whenever possible. When he races two classes, he races the 363 in one and 450R in the other. He says the 363 Selvy motor is the most fun, but the 450 is less work.

Either quad is as fast as a modern 450 quad on the start or when powering from corner to corner. It takes a good kick to start the 363, and like any Open-class two-stroke there is some vibration. We have ridden 363cc TRX engines that are built with lots of high-rpm power for big dunes, and we weren’t fans. Shedlarski’s 363 is easier to ride, and it gets around a track with a great deal of civility for a 35-year-old 250cc two-stroke maxed out to make Open-class horsepower.

What really matters is that the owner thinks it is fun to ride and race. Shedlarski does a lot of his own work, and he has a lot of sweat equity in the XTravel version. As a result, the actual cash that he has in the machine is modest by full-blown race quad standards. It has proven competitive and completely reliable.

If you were to go through and count the number of actual Honda TRX 250R parts that are used on the finished machine, the list would be shockingly small. But, again, that is typical of vintage quads brought up to modern race standards.

It is impressive to see the well of knowledge that Shedlarski has acquired in his few years dealing with high-performance race quads. We are certain that his Selvy 363 has little in common with the pedestrian TRX 250R that he rode before his 23-year sabbatical from the sport. His passion is so all-consuming that he makes quad parts under the Slickrock Gear name. A number of those parts are on this machine. We doubt if there was a harder way to get into racing and tackle the steep learning curve required to transition from fun riding to racing. Starting with a new machine would have been far easier to learn, but finessing a vintage machine and making it work are what fired Shedlarski’s passion, and we can’t argue with that. 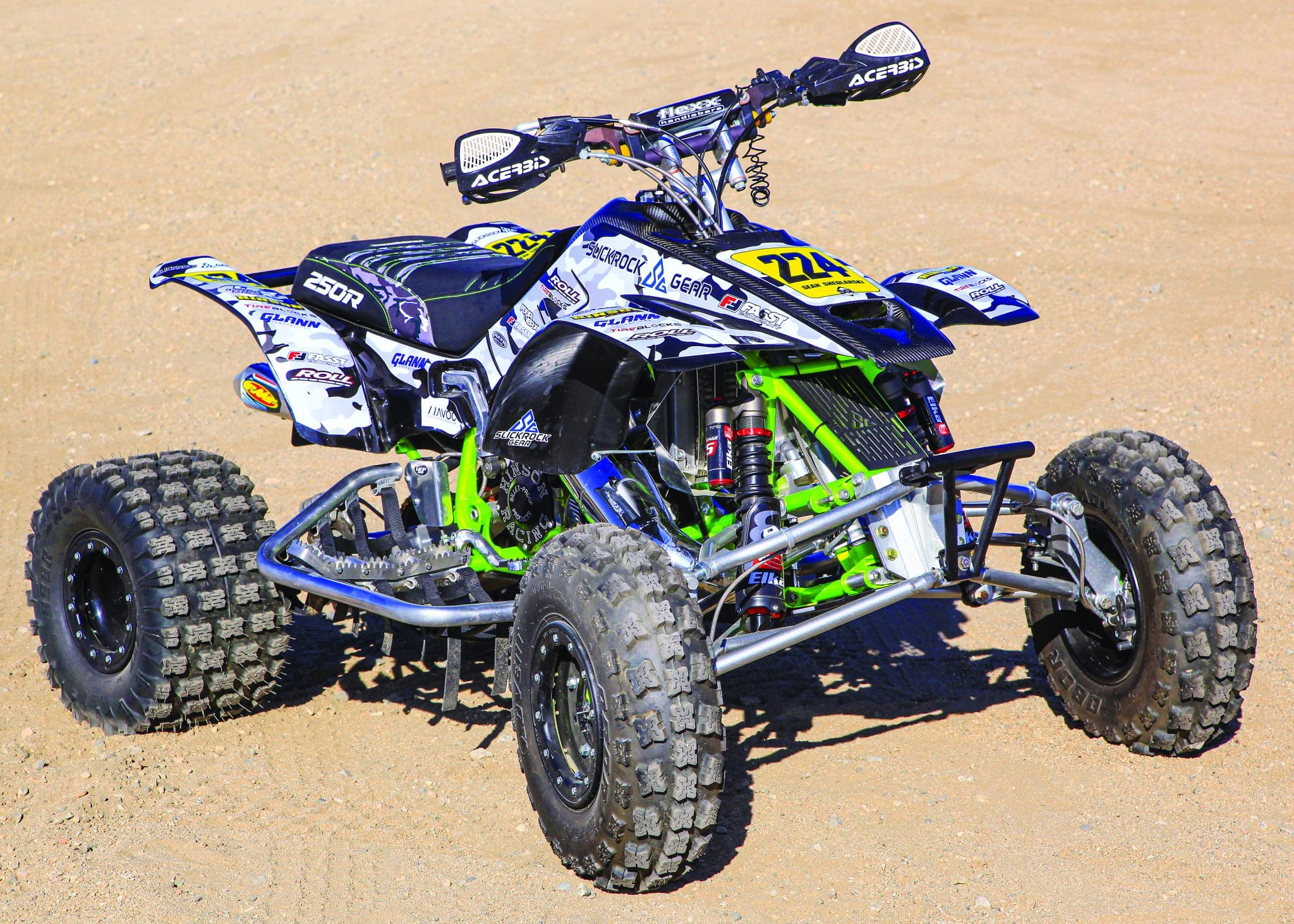 What Can a Car Tell About its Owner?