— We race Justin Wood’s championship-winning Kymco, By the staff of Dirt Wheels — 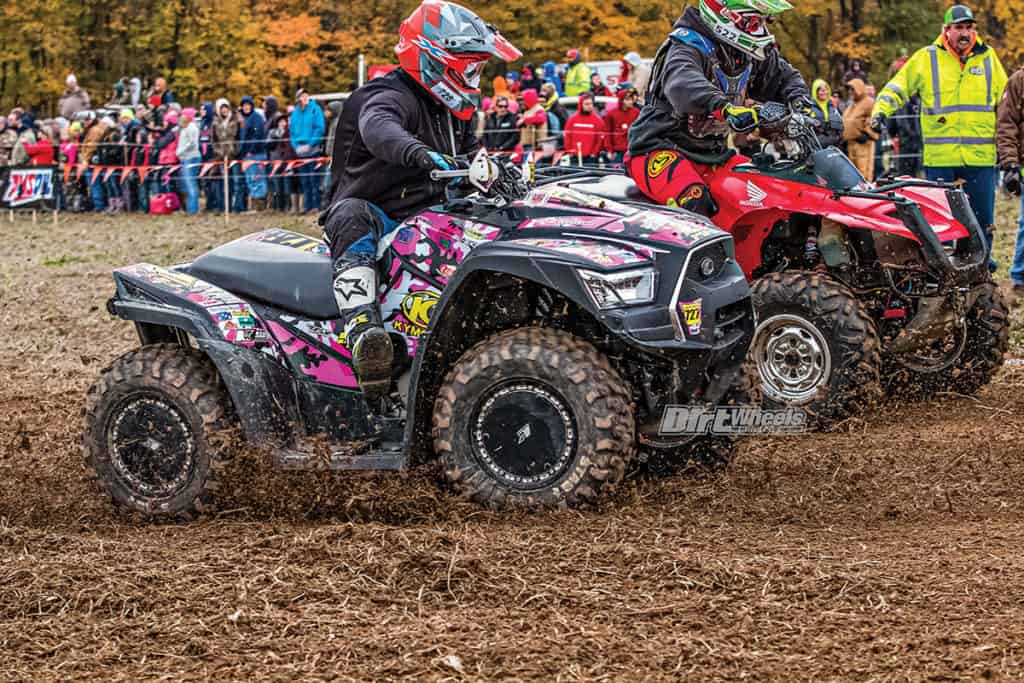 You may be familiar with a company called Kymco. Kymco produces ATVs, UTVs, motorcycles and scooters in Taiwan, and have been doing business since 1963. Since then, Kymco has been pumping out some of the best-built Taiwanese equipment there is. Kymco also strives to build quality parts for themselves and for other companies, including Kawasaki, BMW and others.

Of late, Kymco’s USA plant in Spartanburg, South Carolina, has been using the GNCC, WORCS, BITD series’ and other smaller race series to test the durability of their ATVs and UTVs. Kymco Racing’s 2017 recruit, Justin Wood, who is a military veteran and a veteran of the GNCC racing series, was able to secure the 4×4 Lites GNCC championship four rounds early aboard his MXU 700i LE Prime ATV. Seven class wins aboard the MXU 700i turned some heads for the other racers and fans in attendance. This is impressive, since the 4×4 Lites class allows production-based machines under 750cc, like the Kawasaki VForce 700, Grizzly 700 and the Honda Rincon, to race together.

Kymco was ecstatic with Justin’s championship, and why wouldn’t they be with their first GNCC championship? We zoomed to Indiana for the final GNCC round to race this machine for ourselves. We wanted to see why it was able to win against the big boys!

Justin was kind enough to go out and purchase a new MXU 700i Prime ATV and build it for his next season of racing, but before that, he wanted us to test it at the Ironman GNCC! First up, they had to remove everything out of the machine and have Kenny Vincent weld crucial gussets into the frame to prevent it from cracking or breaking with the extreme use of racing. Vincent also builds the front and rear bumpers for Justin, just in case some other racer gets froggy and wants to leap into the front or back of his Kymco. After that, Justin puts his machines back together with care using Loctite and torquing the hardware down to the correct Kymco specs. This ensures that everything stays together properly while Justin is laying down fast lap times on harsh GNCC courses.

The quad we raced didn’t have everything that Justin’s championship quad has, but it has some killer parts on it. Fully adjustable Custom Axis shocks replace the stock Elka Stage 1 shocks. The Stage 1 Elkas work great for recreation with their preload-adjustable feature, but Justin needs more out of a set of shocks. His Custom Axis shocks offer high-speed compression, low-speed compression, rebound and preload adjustments. They’re also set up for his weight and skill level. For rider comfort, the stock handlebars were replaced with a Flexx handlebar that helps absorb chop and vibration that usually gets transferred to the rider. The Rox Speed FX handlebar risers don’t just raise the Flexx handlebar, but offer forward and aft adjustment for great ergonomics.

Justin is sponsored by CST Tires and had 25×8-12 Stag tires installed on 12-inch Keizer three-piece bead-lock wheels. These tires are smaller than the 26-inch tires that come stock, but the smaller tires give the MXU a lower center of gravity while cornering and provides more traction. Compared to the stock 14-inch cast-aluminum wheels, the Keizers offer more strength, replaceable parts and the beadlock ring keeps the tire securely on the wheel if Justin gets a flat tire. One crucial component that we can’t see is the Tire Blocks’ flat prevention system inside of the tires. The foam blocks provided in the Tire Blocks kit keep Justin rolling if he happens to jam a stick in the tire or cuts a sidewall.

According to the numbers from Kymco, the single-cylinder, 695cc, SOHC, four-stroke EFI engine pumps out 45 horsepower and 39.75 foot-pounds of torque. That seems to be a good number for the big single cylinder, but in racing, there is never enough power.

Legendary engine builder Dee Manshack of Rage ATV punched the cylinder out to 750cc, ported the stock head, installed a more aggressive cam and added oversized valves for better flow throughout the top end. Rage also bored the throttle body for better breathing. The clutch needed to be upgraded, and Airdam’s clutch with their upgraded setup made the power get to the ground faster and more efficiently.

Monster Fuel Injection added a larger fuel injector, reflashed the ECU to let the machine get the right fuel and air mixtures, and added a tuner to change mapping as needed. To get the most out of all of these mods, an exhaust and air filter that had more flow than stock were required. GSE Performance built an exhaust that doesn’t just sound mean, but allowed the MXU to utilize all of its newfound power. Then GSE added their air filter to keep the innards of the engine clean and happy while supplying clean air to the throttle body.

There are a few products that were on Justin’s championship-winning MXU that weren’t installed on the machine we raced. MZM Performance offers a complete anti-vibration +1 steering stem for the MXU 700i. MZM also built some one-off sets of adjustable A-arms for the front and rear of Justin’s race quad that allow for more precise turning and are built stronger than the OE Kymco arms. Out front, the Vincent front bumper is built to battle with any machine on the course and has even helped a few two-wheel-drive racers out of some mud holes in the past.

Race day at the Ironman GNCC was a cold one. The high for the day was supposed to be 40 degrees Fahrenheit, but it never reached that warm, fuzzy spot. After doing small shakedowns on Justin’s soon-to-be race quad, we were ready to line up against the best woods racers in the world.

GNCC races require a dead-engine start, and when the flag flew, the Kymco didn’t fire quickly enough. That put our contributing editor, Colt Brinkerhoff, in last place out of 10 competitors. The engine had good torque, but when traversing some of the more gnarly hills, the Kymco would start to lose a bit of power. It did, however, make it up the steepest hills on the racecourse without an issue. In fact, Colt made up the most time in the woods compared to the fast field sections that the Ironman offers. He would get passed by the more powerful machines in the fields and then reel them back in and make passes in the trees or on the hills. The creek crossing and mud holes were no match for the four-wheel-drive system on the Kymco. The CST Stag tires were impressive on every aspect of the course, but more so in the mud, on hill-climbs and across soft terrain.

The Custom Axis suspension worked well taming the rutted-out course for the two hours of abuse Colt put on the machine. They helped the MXU to jump some of the smaller tabletops with ease and roll through the rough wooded areas with precision. The braking could have been better on the machine, as it seemed a bit spongy, but hammering the brakes got it to stop in time to miss some pretty hairy tree sections.

The power-assist steering was working great until around 30 minutes into the race when it started to be more of a power struggle to get it to turn. However, after shutting off the machine and restarting it, the system would reset itself. This happened several times during the race, but again, this machine wasn’t built to be raced from the factory; this would probably never happen with normal recreational use.

THE LITTLE KYMCO THAT COULD!

We were impressed with Justin Woods’ factory Kymco MXU 700i Prime model. Not only did Colt finish the race, he finished with a third in class (180th overall) after being dead last on the start. Another notable finish was Kymco’s Kevin M. Johnston, finishing in front of Colt in second place in class (139th overall), also on a Kymco MXU 700i. Aside from the winning Honda Rincon, Kymcos finished higher than any other brand in the class. Those finishes were out of 542 entries in the morning race. Those are solid results, and it’s great to see the quality and time that Kymco and their racers are putting in to making their machines rock solid. We can see why Justin Wood continues to win. He built a very capable racer with the help of Kymco and his great sponsors!

HOW DO YOU HAUL YOUR MACHINE?