Power-hungry By the staff of Dirt Wheels, Photos by Casey Kramer 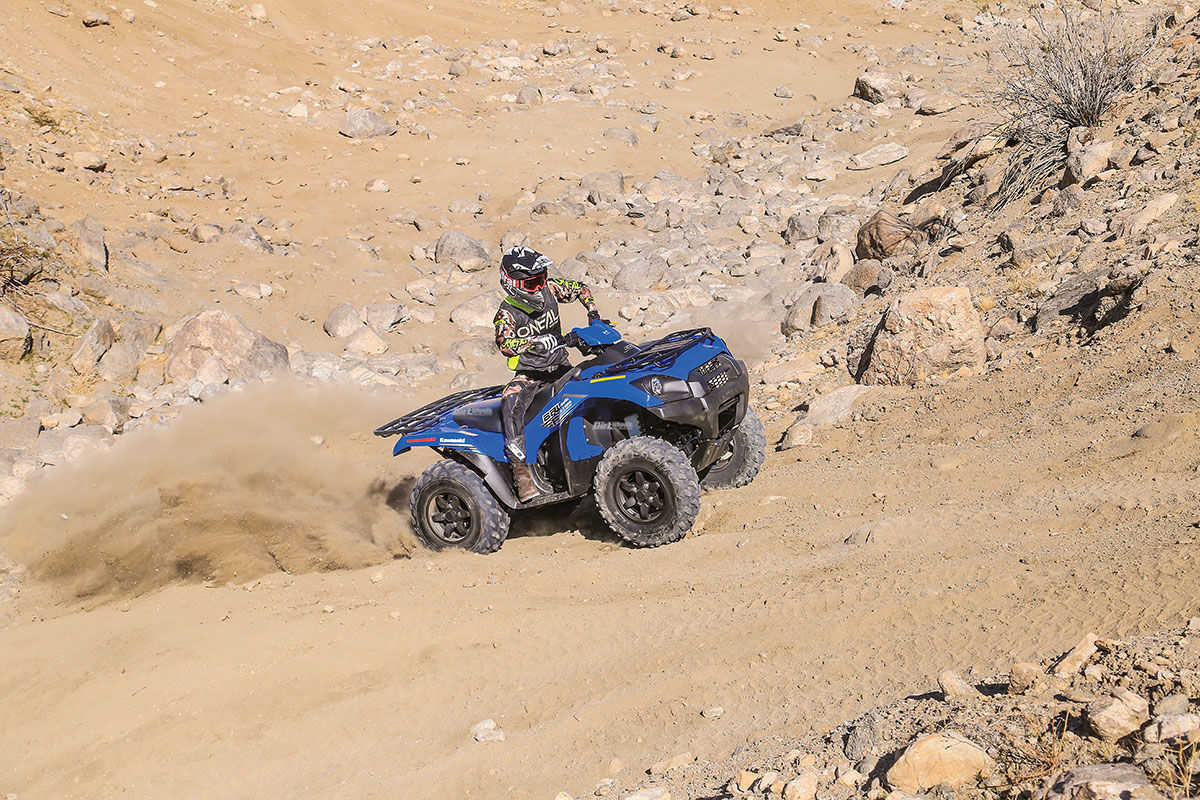 Kawasaki’s Brute Force 750 has always been defined as a power-monger in the class. From the beginning of the model’s long lifespan, the engine performance has been so impressive that it has remained the class bully with few revisions. We aren’t belittling the chassis at all. It does all that is asked in fine fashion. While the shocks are relatively basic by sport standards, the suspension is supple and surprisingly well-controlled for spirited riding. That is important with a powerplant this willing to generate sport-type speeds. In spite of the sporty feeling, the 2020 Kawasaki Brute Force 750 4x4i with electronic power steering can tackle tough jobs with an ease that will let you convince loved ones and the tax man that this is indeed a tool. We just prefer to ditch the work for fast-paced trails, shooting roost or blasting mud.

The Brute Force V-twin powerplant traces its roots to the 2002 Kawasaki Prairie 650. It became a 750 for the Brute Force in 2005 with carburetion until 2007. After that it was fuel-injected. Along the way it grew a larger oil capacity. In 2014 it got higher-performance cams and heads, as well as a new crank. Many popular high-performance aftermarket cams are actually milder than the stock 2014–2020 cams! Kawasaki was the first company to use a high-performance V-twin in a utility 4×4. Even as a 650 the performance was impressive, and it remains the sportiest 750cc 4×4 engine built.

Four-wheel drive is important to a utility machine, and the Brute Force has a good system. It is powered by a CVT with a strong engine-braking feature, and the front differential is lockable. There is a two- and four-wheel-drive selector switch built into the thumb-throttle housing. Kawi’s 4×4 system is that the front differential lock is controlled by a finger-operated lever on the left side of the handlebar.
You pull and hold the lever in while you are piloting the machine, and the harder you pull, the more it locks. Some riders would prefer a button that engages the system, and there are some conversions in the aftermarket. We do like how instant it is to engage, and some riders engage the lock in roots or rocks to act as a steering damper. With the diff locked, it wants to stay straight. On the plus side, you can partially engage the lock with the lever.

THE WHEELS ON THE BUS

For most of the machines in this category, the shocks that control the four-wheel independent suspension are pretty basic. They are gas shocks, but have only five-position preload adjustability. With the engine performance the Brute Force offers, a model with higher-performance shocks seems like a natural progression. With 6.7 inches of travel in front and 7.5 inches at the rear, more suspension travel would be welcome as well. To be clear, the suspension is right on par with anything in the class, but the power is so sporty that we tend to ride the Brute Force like a sport model, and that emphasizes the limits of the suspension.

Turning is made easy by electronic power steering. Most base-model big-bore 4×4 ATVs come stock without EPS, and the Brute Force does, but the Kawasaki only comes with EPS if you want camo. The steering is smooth and light, and it doesn’t feel twitchy while riding it. Kawasaki seemed to have dialed in the EPS quite well. Part of that feeling can be attributed to the packaging of the machine. The Brute Force feels compact, nimble and easy to maneuver, and that is remarkable considering the packaging issues that are natural with an engine the size of a V-twin. Compared to others brands with this level of performance, the Brute Force is almost petite.

Stopping the quad is a different story, though. The front brakes are hydraulic disc, while the rear has a sealed, oil-bathed, multi-disc setup. The beauty of these rear brakes is that they are tucked away and are not vulnerable. For slow-speed, technical driving, the engagement is smooth and the rear wheels do not lock easily. As we have found with many sealed rear brakes, push it hard and they are not as strong as we like, and they will fade. Again, we must point the finger at an engine that is all too willing to let you ride hard. Start pushing the chassis to the limits and you need to plan ahead to put the stopping power down. The front brakes are strong but could even be a little stronger. The rear brake is controlled either by a lever on the left handlebar or a foot pedal on the right side. The front brake is operated by a lever on the right handlebar.

For some, the Brute Force 750 is an implement, a tool or a means to work. It can tow up to 1250 pounds, which is close to towing specs for many UTVs. We needed to maneuver a 6×12 enclosed trailer that was pushing that tow limit, but didn’t have room for the truck. We took the Brute Force out of the trailer, bolted a ball to the hitch and jockeyed it into a tight spot with ease. The Brute really tows well. The hitch is a plate with a hole for a light-duty ball with a small shank. We could have used a taller ball location, but the Kawasaki would need a receptacle-type hitch to allow different draw bars.

In addition to towing, there are storage bins and steel cargo racks on the Kawasaki. The front cargo rack can hold up to 88 pounds, while the rear tackles up to 176 pounds. Remember to adjust spring preload to handle the weight if you plan to load down the racks.

Aside from colors, the look and ergonomics of the Brute Force haven’t changed for 2020. In addition to our Vibrant Blue version, it comes in Super Black and Candy Steel Furnace Orange. The storage options are the same as well. There is a bin in the center of the front rack, a water-resistant bin on the fender and a netted storage location on the other front fender, but more would be welcome. The gas tank does hold 5 gallons, which is helpful with a twin-cylinder engine.

A new machine is always nice, and the fresh Brute Force is no exception. It fires easily as we expect EFI machines to do, and runs clean with crisp throttle response and that amazing Kawasaki V-twin sound we love. The Kawasaki sounds as strong as it runs. It isn’t loud. It can’t be and meet OHV standards, but it is throaty. We first put the Brute Force to work ferrying us to different photo locations in the desert. There were far more whoops than we typically look for on a sport utility 4×4, but they could not be avoided. Many of the routes we traversed have been created or impacted by UTVs, and the Kawasaki is a little too narrow to straddle the center hump with confidence. We just stayed alert and straddled the hump when it was mild, but when the two-tracks got deep, we transitioned to one track or the other. Even though the Force weighs in at 699 pounds, it was easy to control and feels nimble and goes where you want it to.

The soft shocks handle general 4×4 riding in style. The combination of the seat cushion and the shock tuning makes for a nice ride. Bump up to a sporting pace and the 750 is using a lot of the travel, and there is more body lean than we like. It was surprisingly capable in whoops when we weren’t in any great hurry. We never got to the point that we were attempting to carry the front wheel from hump to hump.

Kawasaki spent time making sure their 750 has a comfortable cockpit. The seat is supportive without feeling firm. There is enough room for tall riders to move around, and the handlebar height is spot-on. At the same time, shorter riders will be at home as well. The levers and controls are easy to reach and use, but the Brute’s rear brake could be a stronger.

The suspension is soft and plush on relatively smooth trails or when speeds are not high. The engine has enough snap and response that the Brute Force wheelies and jumps more and easier than any sport utility quad. The shocks aren’t as happy with abrupt hits, and they bottom easily with small landings. This is common with most 4×4 ATVs in the Brute Force 750’s class, but the 750cc-class singles don’t launch into the air as easily.

For rocks or firm terrain the stock tires work fine, but for sand and mud more aggressive tires with deeper lugs and more support for the sidewall would be a benefit.

Kawasaki builds a nice machine. The excellence of the basic bones is proven in how well the Kawasaki has survived with so few changes, yet it is refreshingly current. It will tackle tough terrain and work as well as any 4×4, but it supplies that added facet of true sport engine performance. The Brute Force 750 comes in a base model without EPS that starts at $8,999. The EPS model like this one starts at $9,999 to $10,599. There is also a camo version that comes with EPS and runs $10,599. Go to www.kawasaki.com to check out their extensive lineup of UTVs and ATVs.

Why Should You Check the VIN Code Right Now?