One good thing that has come out of the recent economic recession is smoking hot deals on used quads everywhere. Desperate people are liquidating some of their disposable assets, and savvy shoppers can take advantage of the bargains. Here on the West Coast, sport quads seem to be the most available. We see deals on almost-mint 400–450cc sport quads for less than half of what they sell for new. The following is an example of two deals that we recently found on Craigslist listed for $3000 each. The new owner talked the seller down to $2500, then totally customized the quads for about the same price as a new Suzuki. The major differences between the two machines are that one has the engine keeping the stock 450cc displacement and the other was turned into a big bore. Here’s a list of what was done to each quad in the power department. 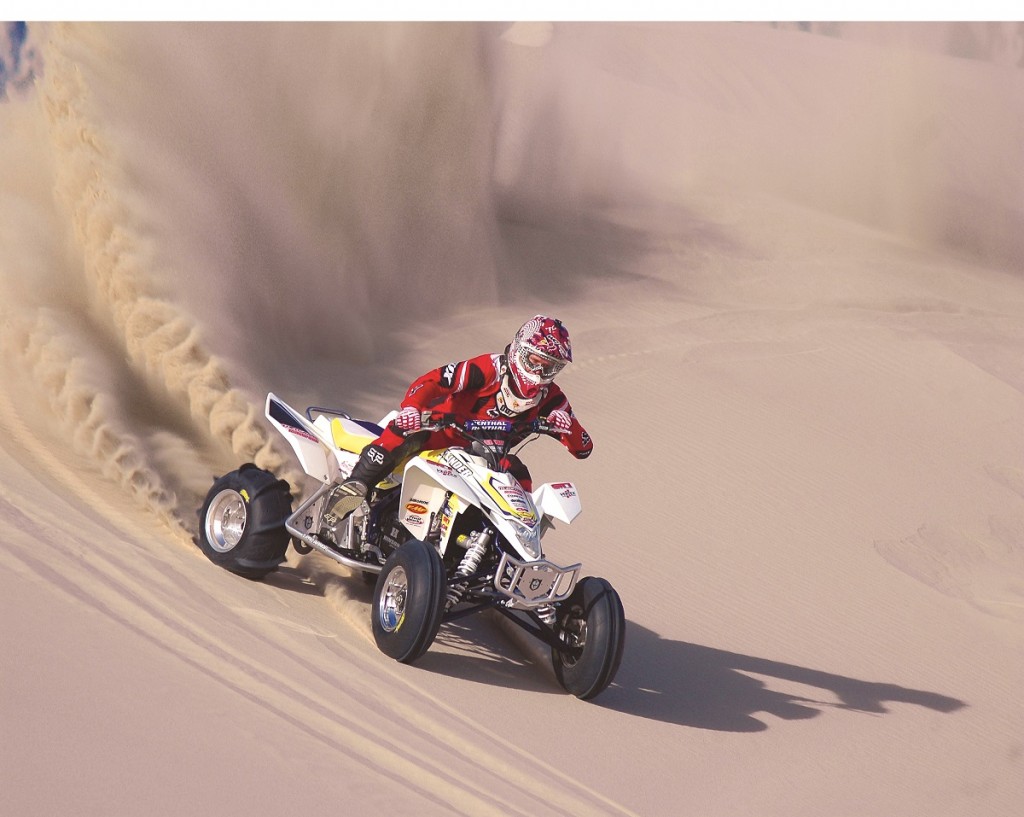 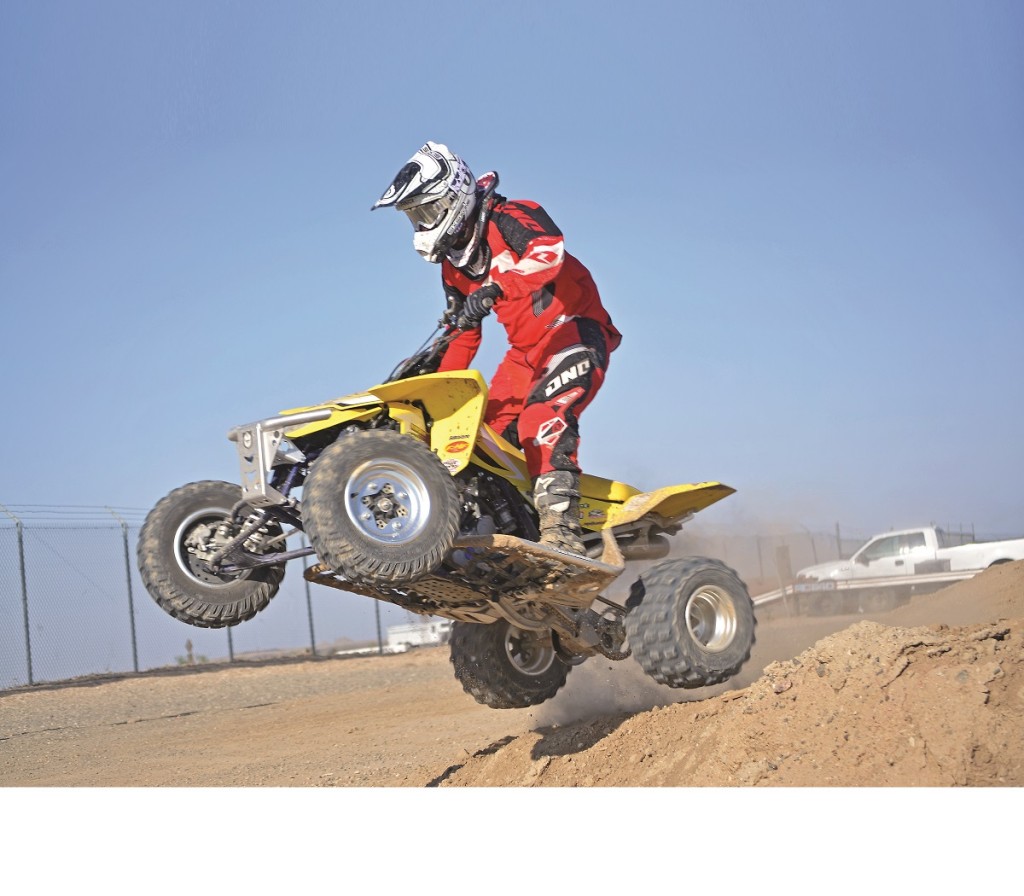 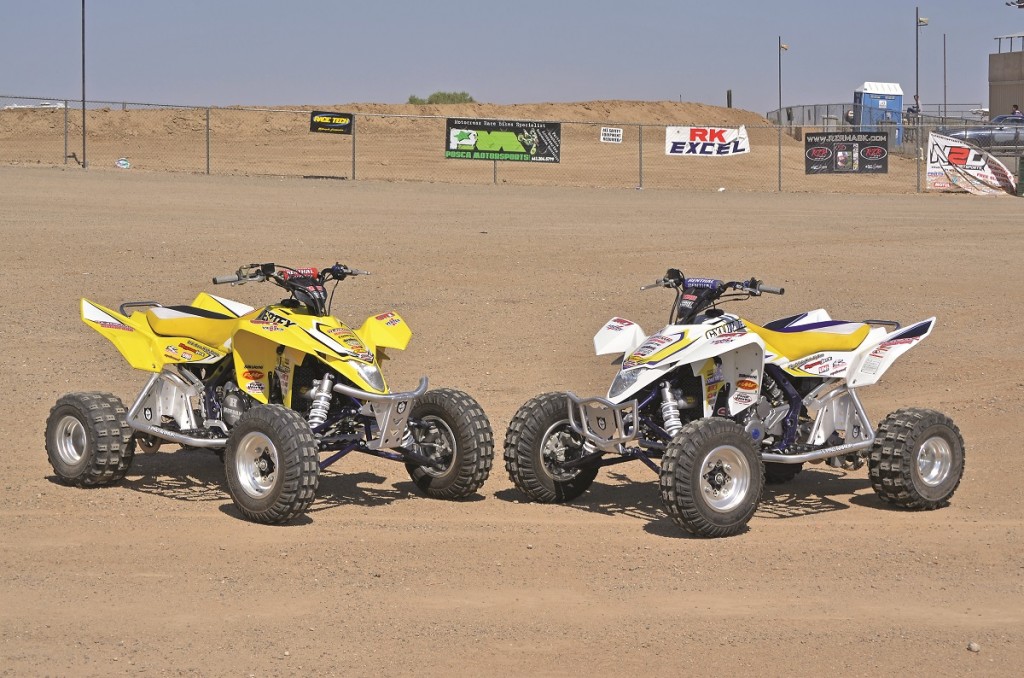 STOCK SIZE REBUILD
To try these two machines out, we did a full two-day test. The first day was in the dunes. The sand is nature’s dyno, so it was easy to tell the difference between the two engine packages. Furthermore, for this test session, both Suzukis were equipped with STI paddle tires, front and rear. Alone, the stock-bore Suzuki ripped. We know that this machine was designed for the track, but with its low-end grunt and low, wide chassis, the Suzuki 450 carves the dunes very well. The high-compression Vertex piston, FMF exhaust and Power Commander fuel controller overcame any power loss a typical stock quad would suffer in the dunes. 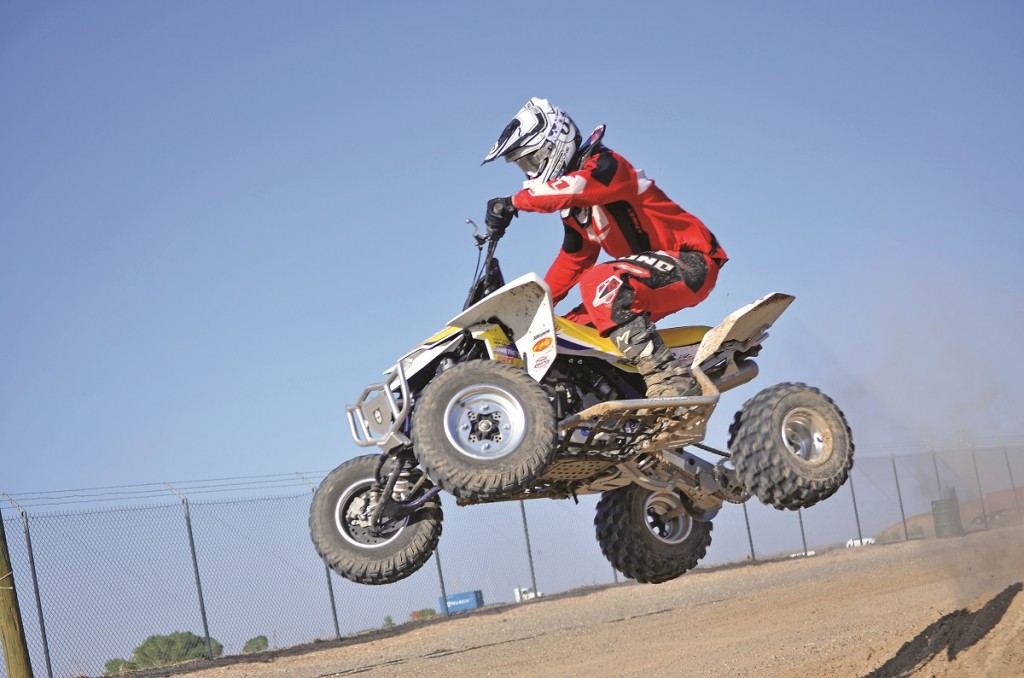 This power package was very smooth as well. A day in the saddle was not tiring at all. We had more than enough power to have fun, and the only other quad there that could beat this machine was the big-bore Suzuki that we brought along. BIG-BORE POWER One of the coolest things about the big-bore machine is that the Cylinder Works top-end kit looks completely stock. So if you want to race your buddies up Comp Hill, they will be in for a surprise when all they see is the roost coming from your paddles. In this case, the bigbore jug is a respectable 477cc. At this size, you gain a noticeable power increase without jeopardizing the reliability of the lower-end components, like the bearings, rod and crankshaft.

In individual runs, it was easy to feel that the big-bore machine had some extra ponies. To see the power difference with our own eyes, we started dragging the pair head to head. From start to finish, the big bore machine led the contest. At the end of a 200-foot run, the 477cc machine consistently had two lengths over the stock-bore Suzuki. We could start hill-climbs in second gear while we could only start in first with the other machine. Keep in mind these quads were pulling 20-inch-tall STI paddles. What a blast it is to ride a good-handling, new sport quad in the dunes. 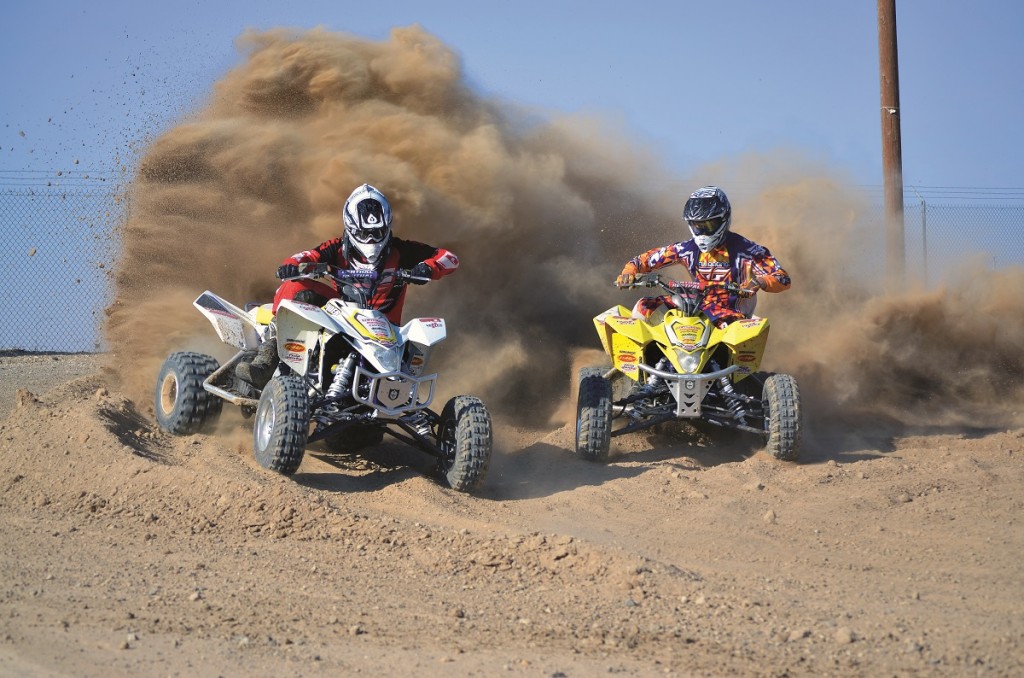 TRACK TEST
Day two of our testing took us to our local MX track (www.avmotoplex). Here we mounted the stock Dunlop tires back up for the moto session. Again, it was easy to feel the difference between both power plants. Around the track, the big bore was almost too powerful. Its hard-hitting acceleration took extra strength to hang on to. Plus, we didn’t even use all of its power to clear the long tabletops; however, we did find some advantages with the extra power. Several times a lap, there are sets of doubles right after tight corners. By only using half-throttle in second gear, we could easily clear them. Even though it had slightly less power, the stock-bore QuadRacer felt easier to ride around the track. It was way more powerful than the bone stock machine we also had on hand for the comparison. Again, the combo of the FMF exhaust, Power Commander fuel controller and high-compression piston made you feel like you were riding a factory racer. 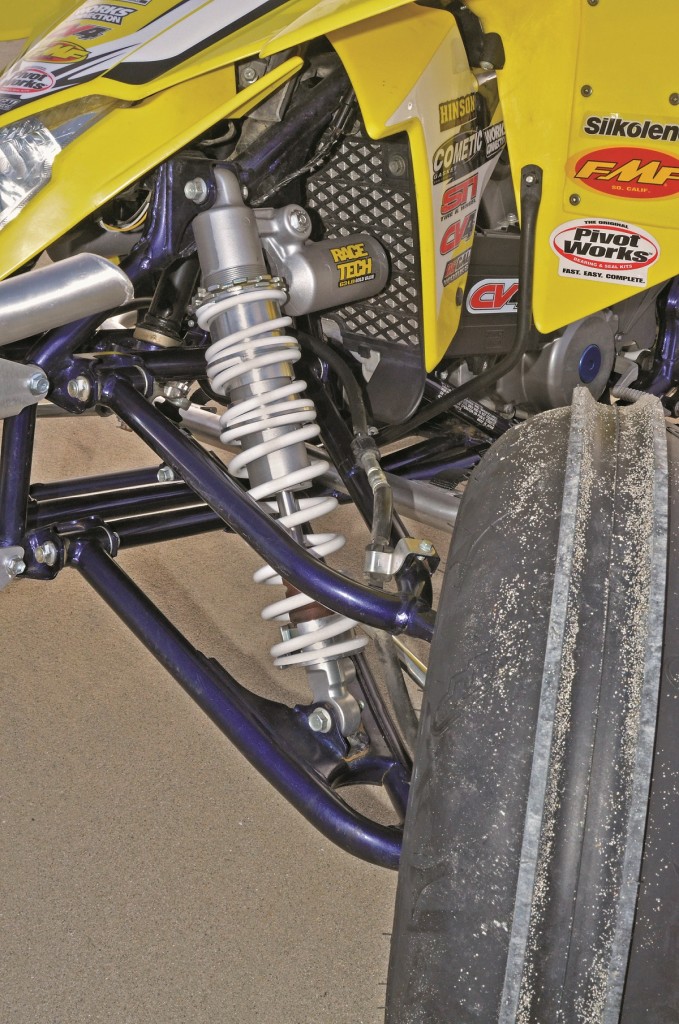 SUSPENSION ACTION
In stock form, the LT-R450 shocks are rather rigid and stiff, partly due to the fact top racers like Doug Gust were involved with the development of this machine. To make these two machines a little more comfortable for mortal men, Race Tech was commissioned to re-valve and re-spring all six shocks. In the sand, the service worked phenomenally. The dune area where we tested in was full of wind-blown chop down on the flat lands. Race Tech’s triple-rate spring kit worked wonders to smooth out the ripples. At slow speeds, the Zuks were as soft as a Polaris utility quad. At higher speeds, the reworked shocks soaked up the harsh G-outs and big, flat landing jumps perfectly. We couldn’t ask for a better suspension package for these two quads in the dunes. 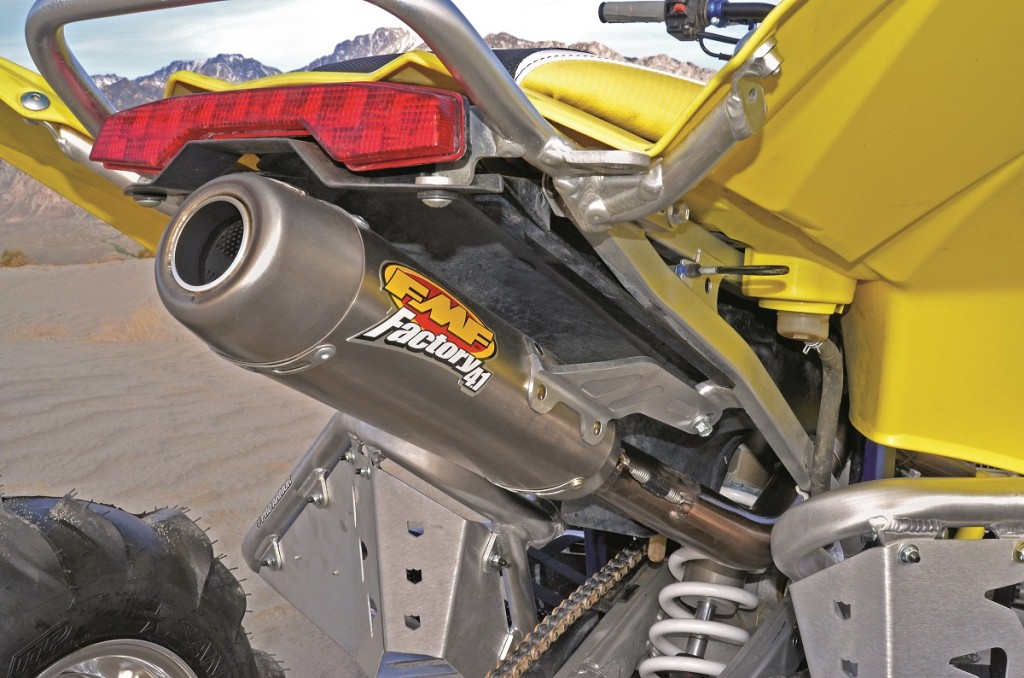 At the track, we still felt the shocks were a bit harsh, unless you landed the jumps perfectly. On the good side, the spring package did a great job soaking up braking and acceleration bumps that are so common on popular tracks. If you can get your quad to work well through these bumps, cornering speed and exit speeds are that much better, resulting in faster lap times. The Race Tech service includes new gold valves, oil, seals and triple-rate springs up front for $700. Their rear rebuild consists of a new gold valve, seals and oil for $280. 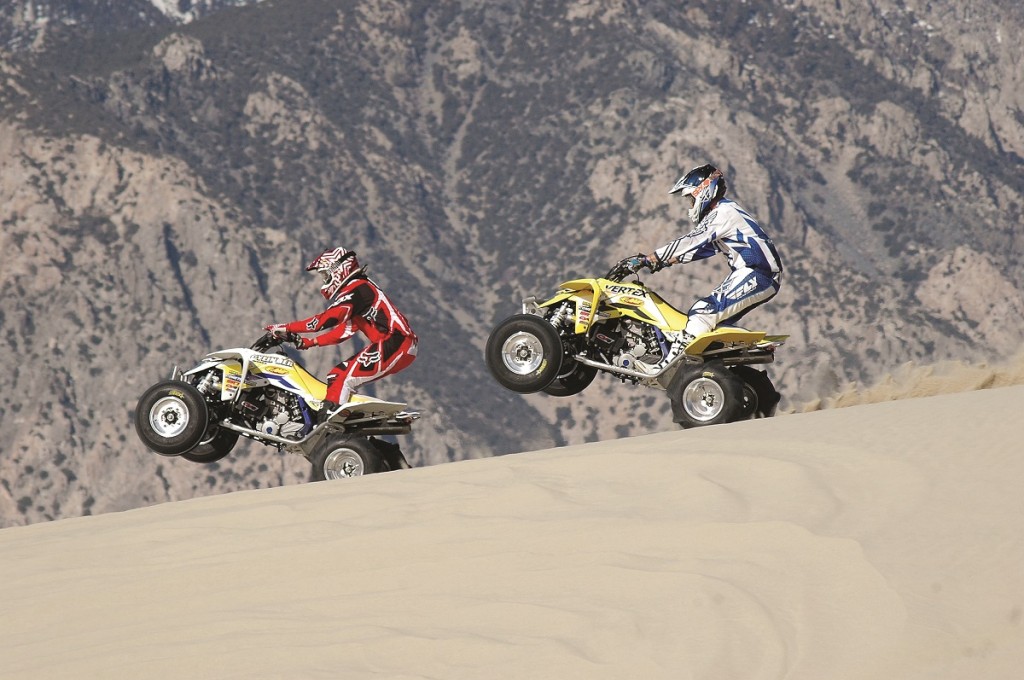 CONCLUSIONS
If you can afford it, now is a great time to buy a new or used ATV. The deals are out there, and the products to help you customize them just how you want are available too. One stop-shop retailers like Motosport Outlet ([888] 676-8853) can outfit bargain Suzukis, Hondas or Yamahas too. Or, with a small investment, you can fix up the old quad you already own. 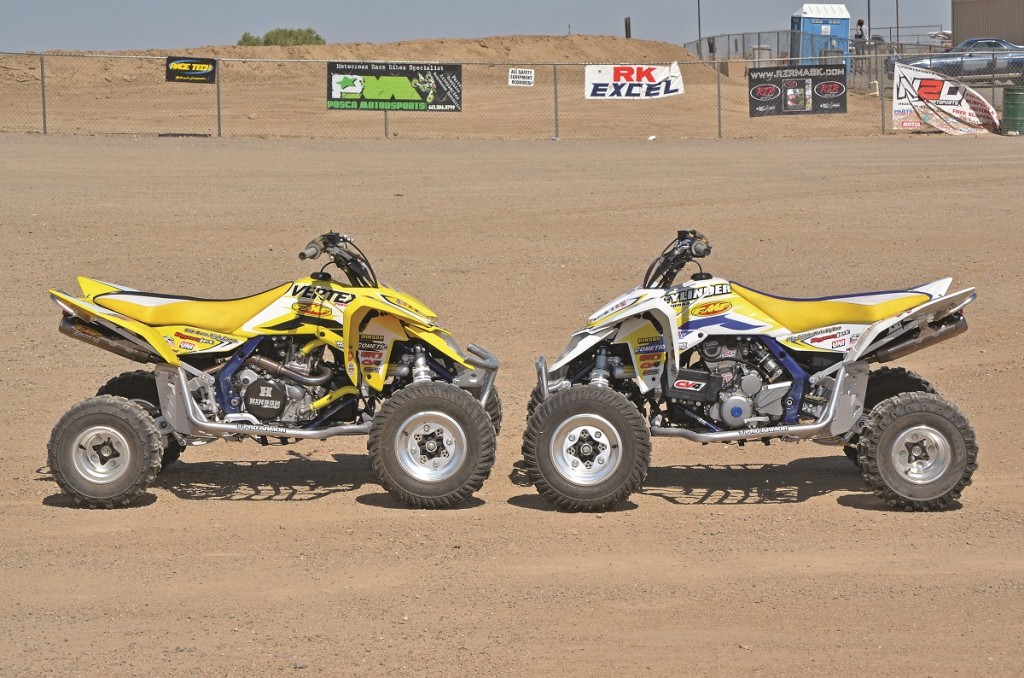 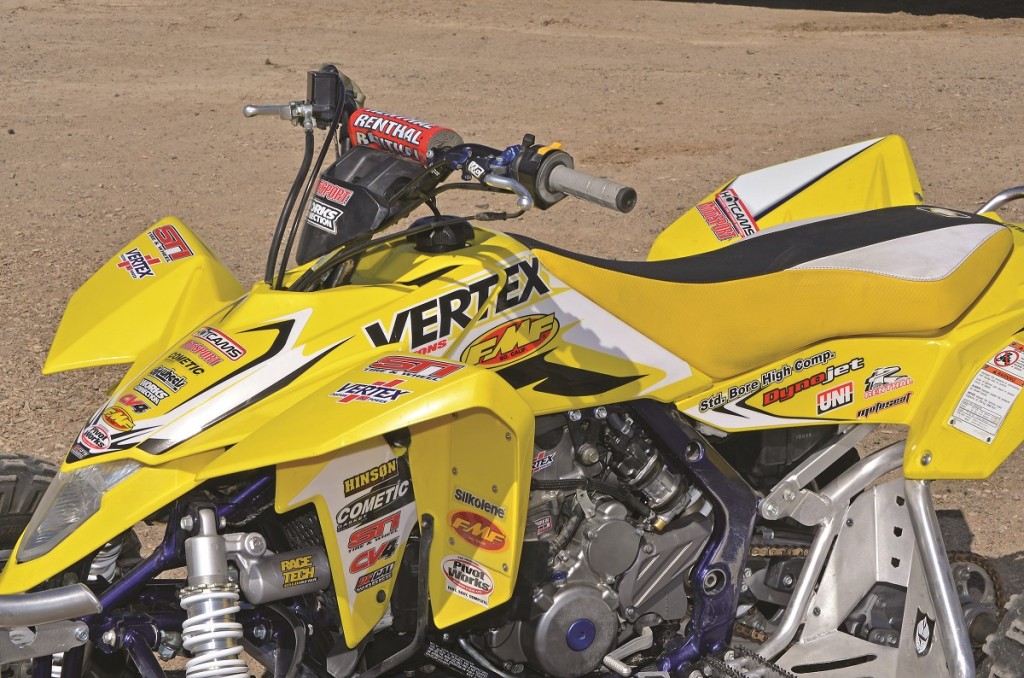 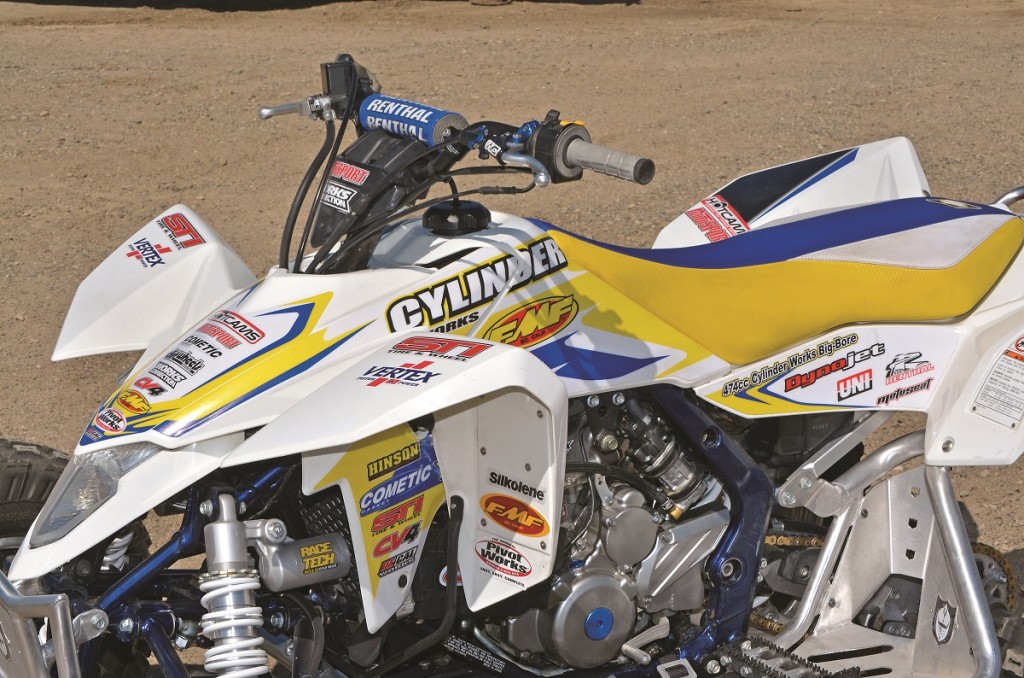 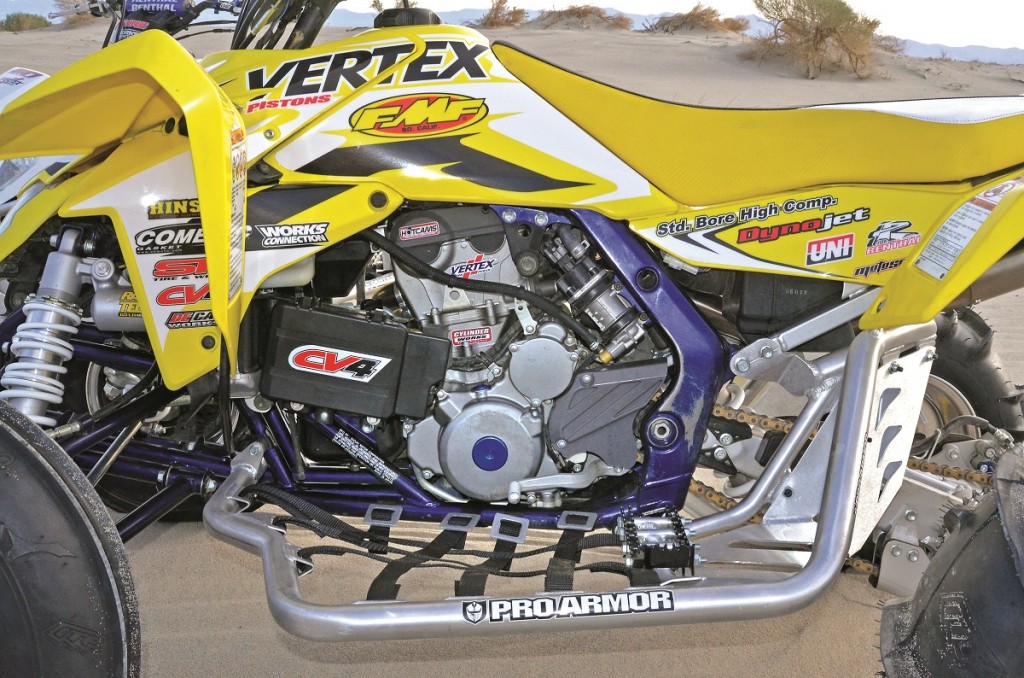 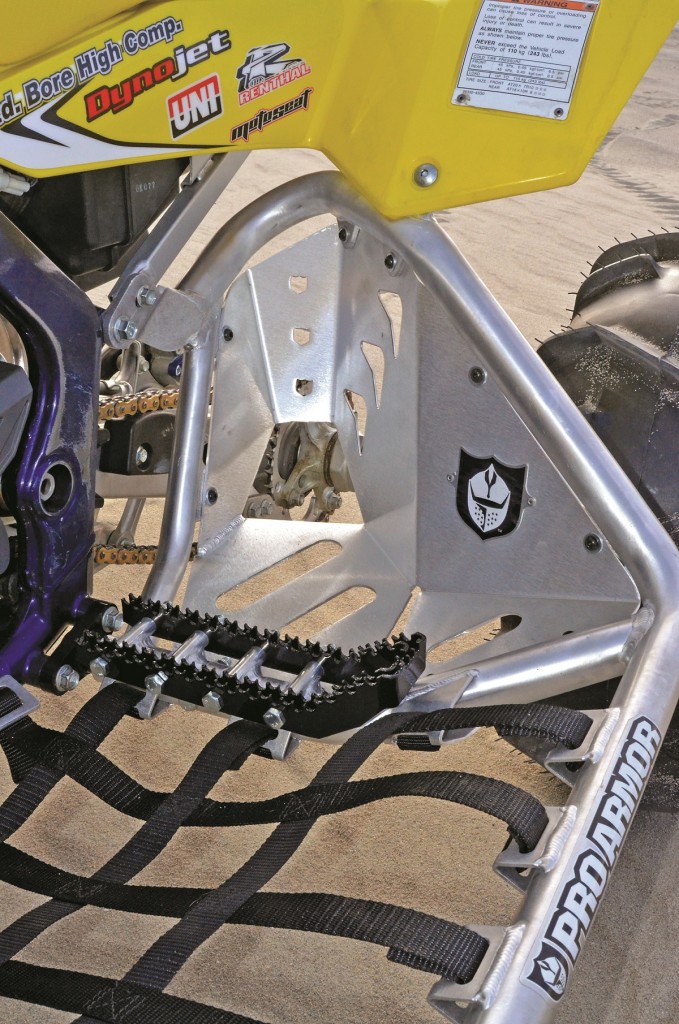 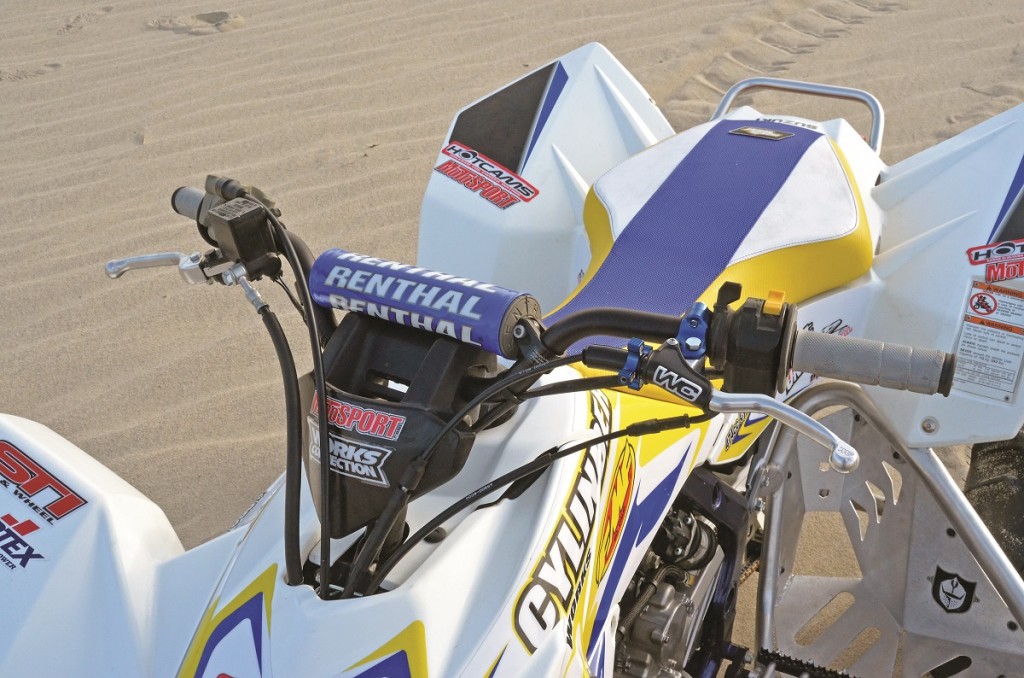 HOW-TO: Turn your quad into a flat track racer