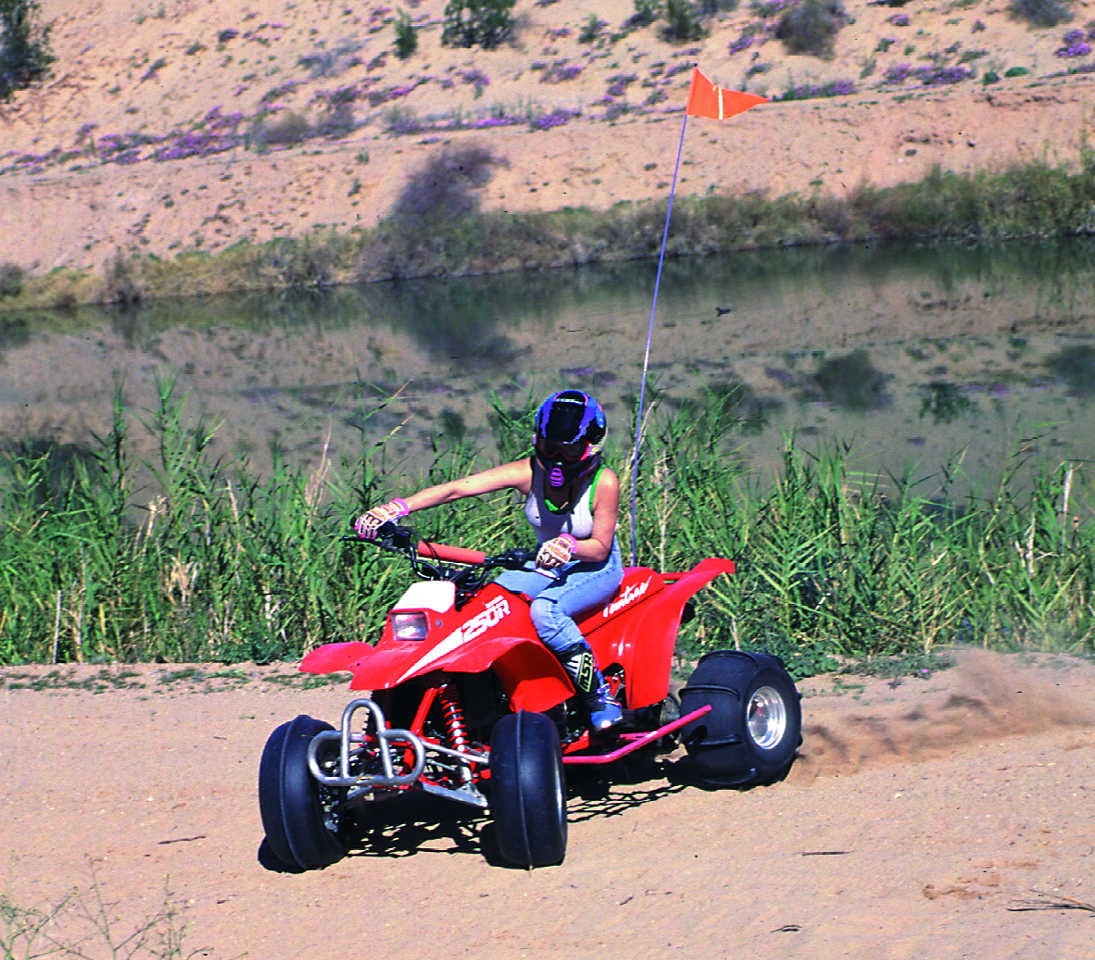 On our many treks to the Southern California dunes, there is a little oasis of a place near the legendary Glamis sand dunes that consistently gets over­looked.  A bit of dune heaven, as it were.

It is called the Buttercup Dunes Recreation Area, and the Dirt Wheels staff took off for a weekend there recently to get a feel for these dunes that are nestled near the Arizona/California/Mexico border.

Unfortunately, on our most recent ex­cursion there, we were confronted by the ever-vigilant Bureau of Land Man­agement (BLM) rangers who pa­trol the district. Rather than come up and offer us assistance or maps of the area, they pulled out their ticket book and issued us a citation for doing a sto­ry about the area without having a com­mercial use permit.

To make a long story short, we tried to explain that our First Amendment right of free­dom of the press allowed us to come out and do a story about the area without having to obtain a permit from the BLM.

“Not so, “ stated the ranger. “Here’s your ticket. You can either pay the $250 fine or send in a plea of not guilty and go to the court in San Diego to plead your case.“ To say the least, we are planning on pleading our case before a magistrate, even though it would be easier to pay the fine and be done with it. After all, it’s somewhat inconvenient to have to drive 400 miles to their jurisdiction to plead yourself innocent (stay tuned for an update on this case as we follow the off-road justice system in a fu­ture issue). 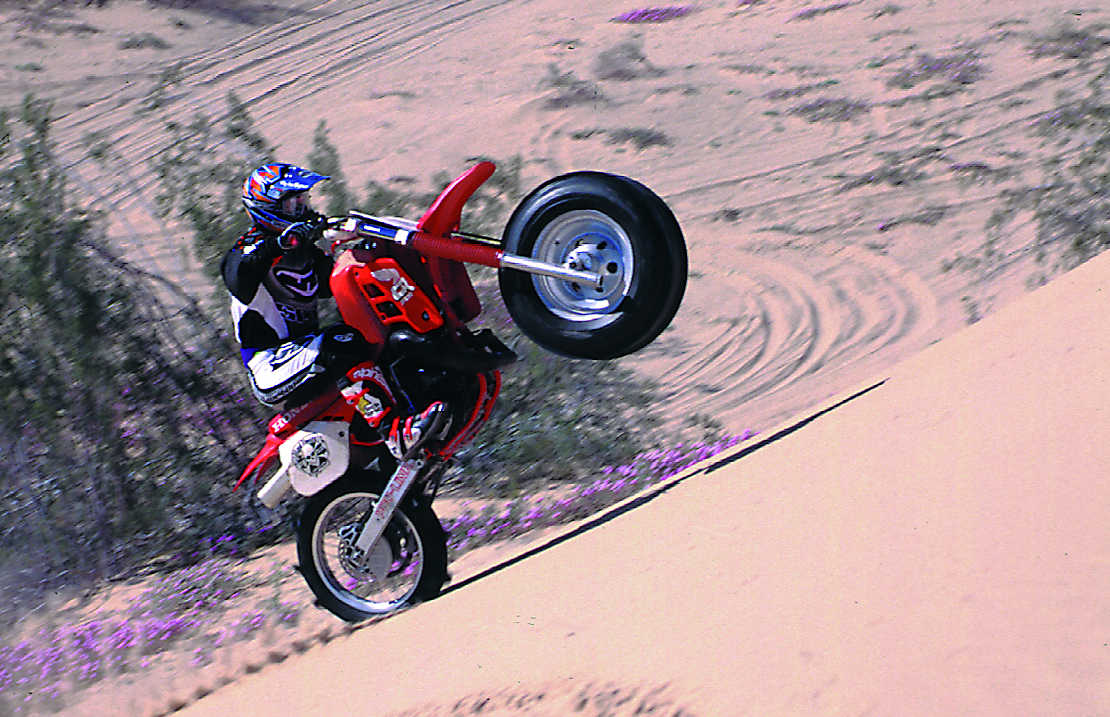 Despite the less-than-stellar introduction to the BLM’s system of official harassment, we continued on our way to exploring this dune area that an­chors the southern end of Glamis and stretches clear to the Mexican border.

The Buttercup Dunes  http://www.duneguide.com/sand_dune_guide_isdra_buttercup.htm are located off the southern side of California Hwy. 8, approximately 20 miles west of Yuma, AZ. The All-American Ca­nal borders the easternmost side of the dunes, the Mexican border an­chors the southern end, and Hwy. 8 the north.

A word of warning about the Buttercup Dunes, though: besides the over­-policing, we found the dunes to be steeper and drop away on the backsides much more than the dunes found around Glamis. Strong southerly winds from Mexico build the sand up to steeper levels, which makes for hairier dune rides.

Buttercup, like Glamis, is a BLM des­ignated riding area, and you must have a valid OHV sticker if you are a resident of California to ride there. You must have a whip antenna, a U.S. Forest Service-approved muffler, and wear a helmet. 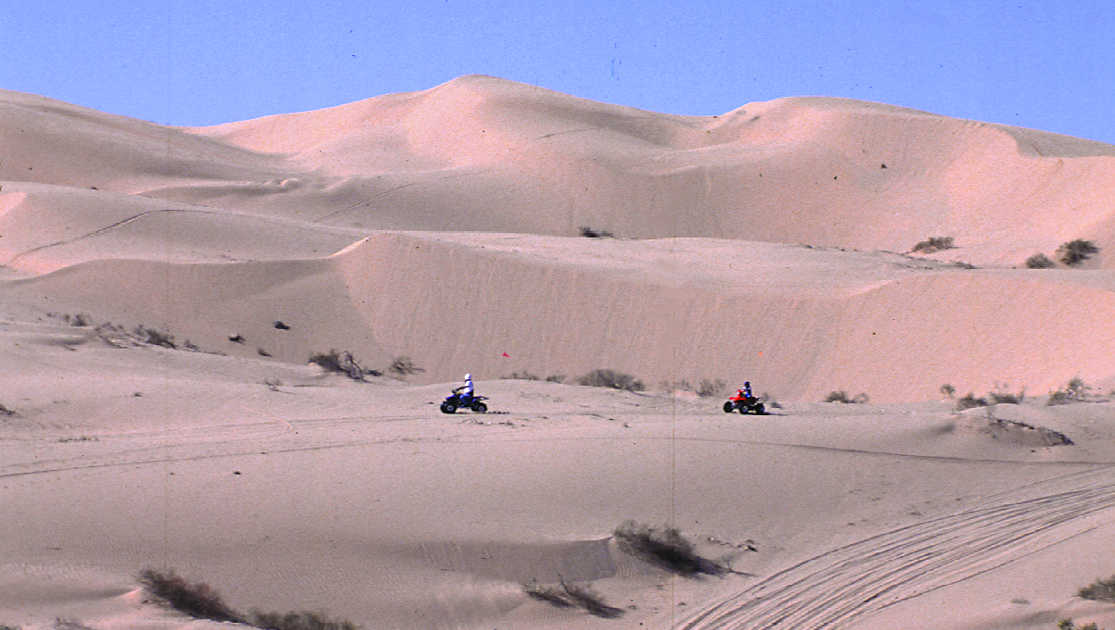 There is a restroom and a wind­ing, paved road that campers and trailers can park near. The dunes are readily ac­cessible, and a scenic road alongside the canal runs all the way down to Mexico. Although not an official en­try point to Mexico, ATV­ers have in the past been able to pass over into Mex­ico, leaving their vehicles on the U.S. side of the border.

Right up the road from the Buttercup Dunes are Gordon’s Well dunes on the northern side of Hwy. 8. They stretch all the way (some 20 miles) to the Glamis sand dunes. You could, with enough gas, make the trek to Glamis and back easily. There is even a great little place called Pair-a-Dice at Gordon’s Well entrance that provides a place to eat, drink and be merry. They serve warm food, cold drinks, and even have a small store on the premise that carries ATV ac­cessories, whips, parts, food, and snacks.

Pair-a-Dice also features a large outdoor dining area, covered with a camouflage canopy, where bands play during holiday get-to­geth­ers. They feature a family-friendly environment and carry a limited supply of gas and firewood for anyone wishing to make the drive down from Glamis.

All in all, we would give the Buttercup Sand Dunes a sand riding rating of two out of a possible four stars. Lim­ited riding area, overenforcement by petty BLM rangers and steep and somewhat dangerous dune char­acteristics make it a less-than-de­sirable place for us to want to visit. Giv­en a choice, we would much rather pull over to the other side of Hwy. 8 and visit the good folks at the Pair-a-Dice cafe and camp out there, away from the rangers. The point, for a lot of us heading out to the dunes, is to get away from the hassles of big-city living, not have them inflicted on you in an uncaring, unreasonable way.

HOW TO TAKE GREAT ACTION PHOTOS