If you have felt the rush of wind around you as you pin the throttle up the face of a dune while sand slings from the tires of your ATV or UTV, then you already know and love the dune-riding experience. Imagine the thrill of riding fast through endless dunes with your buddies, or taking your family on a nice ride along the sandy ridges—now add thousands of people and hundreds of other awesome off-road machines and fun events for the whole family to enjoy and you have Camp RZR West! Vendors are packed into one giant area to show off their awesome products, food stops are endless, and there are tons of tricked-out toys to look at. For 2016, Camp RZR West in Glamis, California, joined up with the Terracross championship to conclude its final rounds of wheel-to-wheel, short-course racing action in specclass Polaris RZR XP 1000s on October 30–31st. 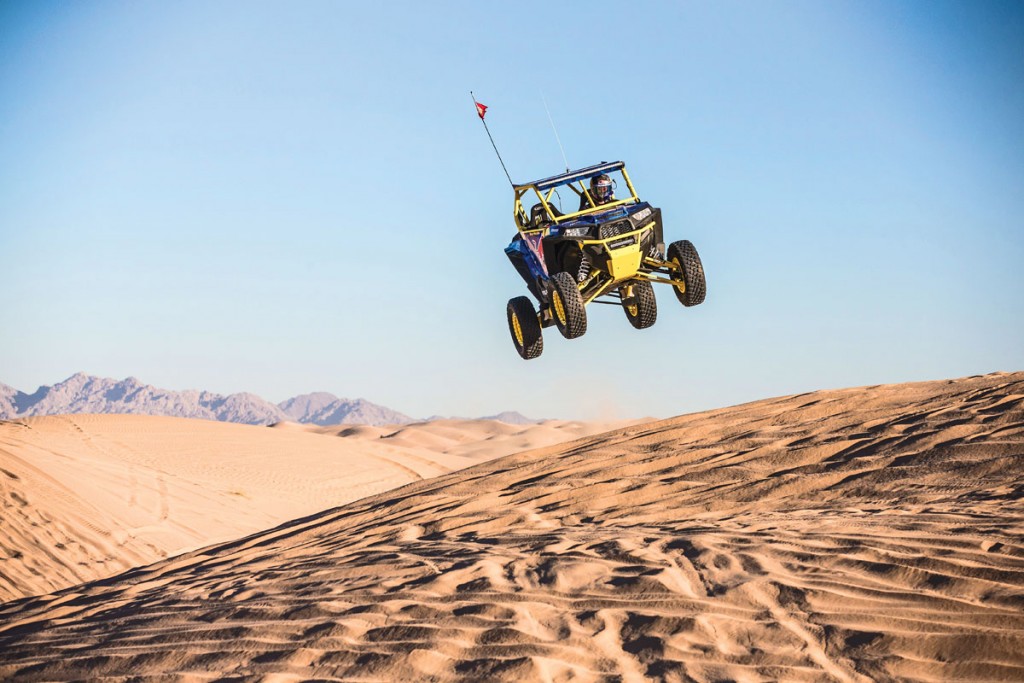 To help describe how awesome this event was for 2015, here’s Sara Price’s recount of the event—an impressive racer who took the gold in the Terracross champion series women’s race class. She has been racing for years and recently got done shredding with her Teryx Girls teammate, Erica Sacks, as they were the first-ever U.S. team to compete in the SSV class during the 25th Annual Rally Aycha des Gazelle in the Sahara Desert. Sara Price connected with one of our Dirt Wheels editors to get the story of Camp RZR West and her championship win of the Terracross series.

CAMP RZR WEST IN GLAMIS, CA
DIRT WHEELS: How was the turnout at this event, and how many people showed up?
SARA PRICE: It was a great turnout! I was very excited to be a part of Terracross, as well as it being Halloween at this Camp RZR event. Glamis is where I grew up riding, so nothing beats finishing a series in front of my friends and family! How many people? I am not sure how many people were there, but the stands were by far full for racing!
DW: Did a lot of major brands show up for vendor row?
SP: Yes! Every holiday weekend vendor row is the place to be and is filled with a lot of companies and all of the goods you would want for your machines!
DW: What kind of special events happened at this year’s Camp RZR West in Glamis? What were you up to outside of racing Terracross?
SP: Besides the night of racing at Terracross, you could for sure catch me at the sand drags and in my camp with family and friends enjoying some good BBQ, going on night rides and visiting other friends’ camps! Riding on a holiday weekend in Glamis is its own community.

TERRACROSS CHAMPIONSHIP FINALS
DW: So you won! How did that feel, and was this round a good one for you?
SP: Wow, is all I can say; it was incredible! Not only did I win the Terracross championship in the women’s class, but I was also the first person in Terracross history to win all the race main events of the series. I was unbeatable, so going into that last round, there was a lot of pressure on my shoulders, and man was I relieved to pull it off—such a great feeling!
DW: How was the track and the fans?
SP: The track was amazing—sandy, loamy, deep and rutted! It was a blast, and the fans were so loud! It was cool knowing a lot of our hometown sideby-side buddies were in the stands cheering me on!
DW: How did your spec-class Polaris RZR XP 1000 treat you? Was this race a fun one?
SP: Well, James Hill and I shared the same RZR, so it was taking on double duty and had some issues during our heats. It kept going into neutral, but we ended up getting it figured out, and the rest of the racing was a great time. I had an awesome time battling it out with Shelby Anderson and the rest of the woman in my class!
DW: What are your racing plans for the 2016 racing season?
SP: I will be racing Toyota of Escondido’s Scion FR-S in Time Attack, as well as returning to Terracross and have some exciting plans to come with Kawasaki in their Teryx!
DW: Are you happy with your sponsors and supporters?
SP: James Hill and I had the best supporters for Terracross you could ask for, from Optimas Powersports always being there for every one of our races, from support of IMG Motorsports and PRP Seats, who supplied us great Seat Belts.
DW: Any other comments about Terracross?
SP: Can’t thank Joe and Jeremy enough at Terracross, as well as the staff and mechanics for all the hard work they put in! They really went over and beyond for us!