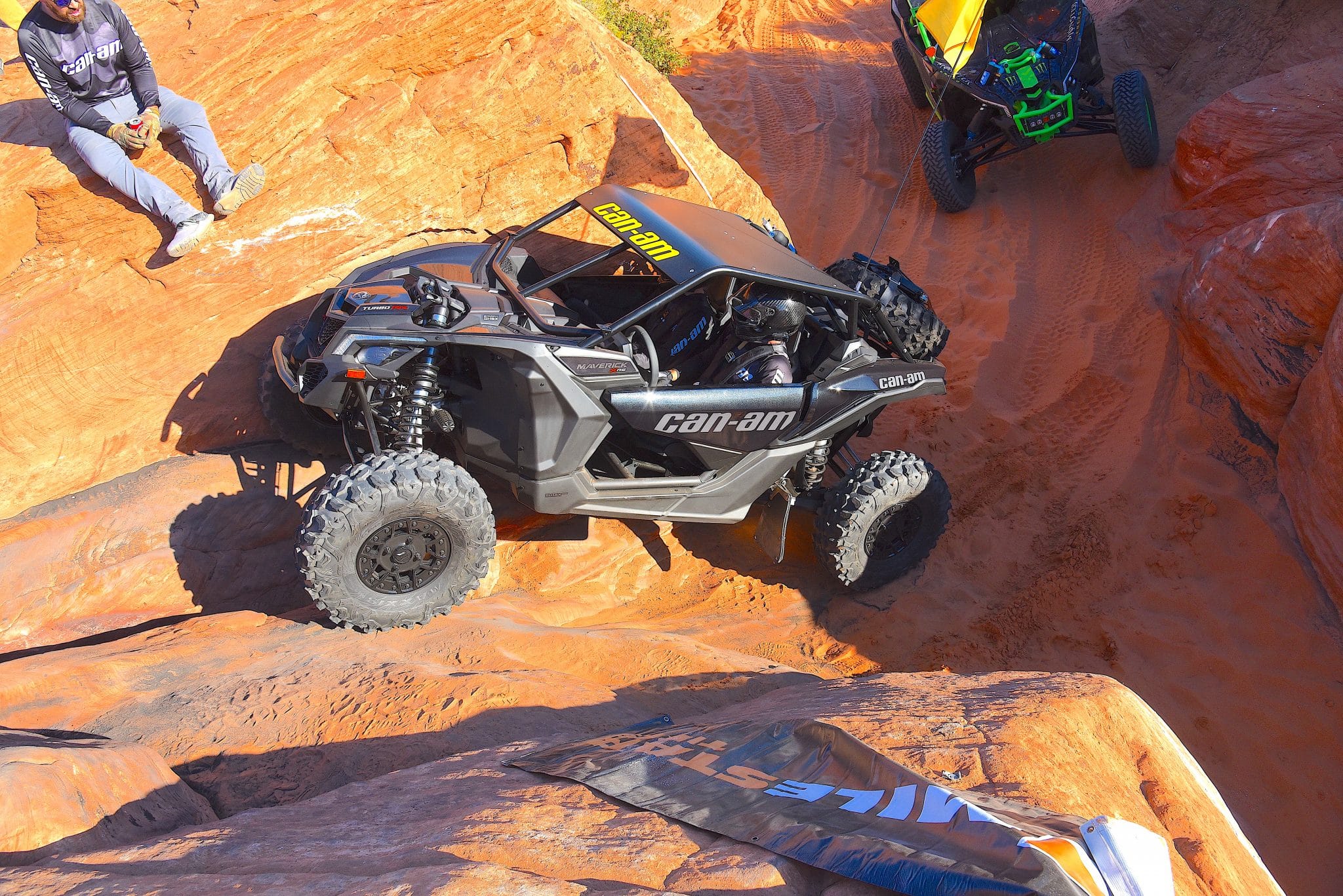 Can-Am had us join them and other industry luminaries to celebrate its International Off- Road Ride Day. International Off-Road Ride Day is a day where the Canadian company encouraged the world to have a day off-road. Can-Am facilitated over 30 rides across several continents, but we were invited to the event in Utah. It was held a couple miles southwest of Hurricane, Utah, on the shore of Sand Hollow reservoir inside Sand Hollow State Park to be more exact. The Sand Hollow OHV riding area is renowned for its unique rocky landscape which also includes some sand dunes. Intimidating red sandstone features were the crux of our riding.

The official guided route ended up being short in terms of miles, but we packed in some extremely technical rock crawling with some dune shredding thrown in the mix. In fact, Sand Hollow gave us more than enough adrenaline-filled moments to satisfy the inner kid in us for at least a couple days. We drove the 2023 Maverick X3. It hasn’t changed from last year aside from color, but we were able to try some new things we had not tried in that car. 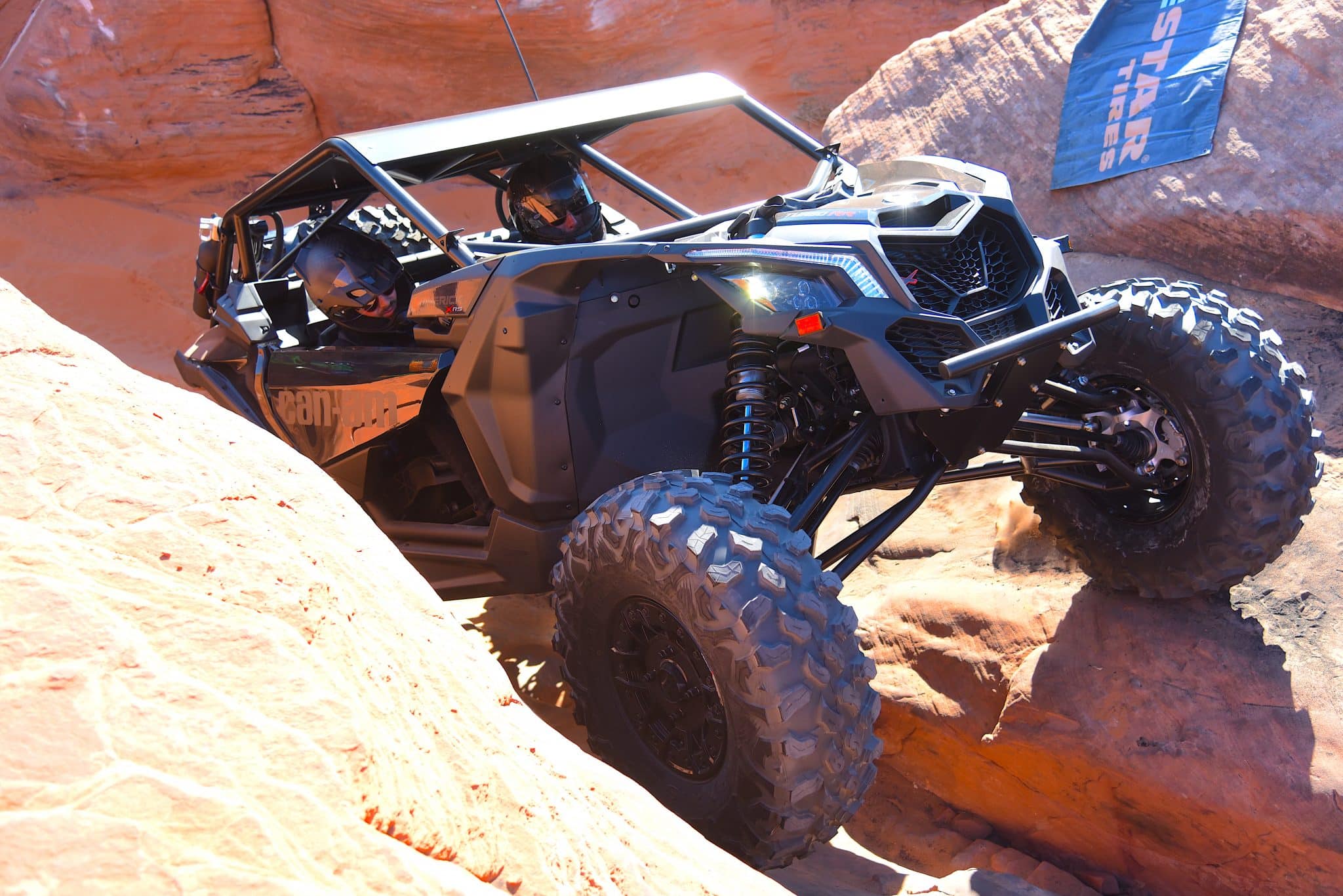 WHY IT’S STILL A FAVORITE

The Maverick remains high on our list of high performance UTVs. Versatility is the shining beacon that has made the X3 such a popular choice for multiple styles of riding. It is exceptionally capable in most terrain types across the country. When it comes to fast desert type driving or racing it’s the favored choice of many past rally sport UTV and pro turbo class racers.

We were able to really put the pedal down through some corners and open fire road sections with speed, confidence and control. This car never stops impressing through corners where the low feel is a huge attribute. It begs to be driven hard and when you do, you’ll find the real character of the car come alive. Whoops and rough chop are this car’s dream.

All that said about its speed performance qualities, it remains a car you can do many things with. Winning King of the Hammers was an example of its proven rock crawling aptitude. Since it was the focus of our ride, we got to experience new levels of intimidating rock features as well as watch some pros do even more advanced climbs. It was downright scary what the car can do with a capable driver. 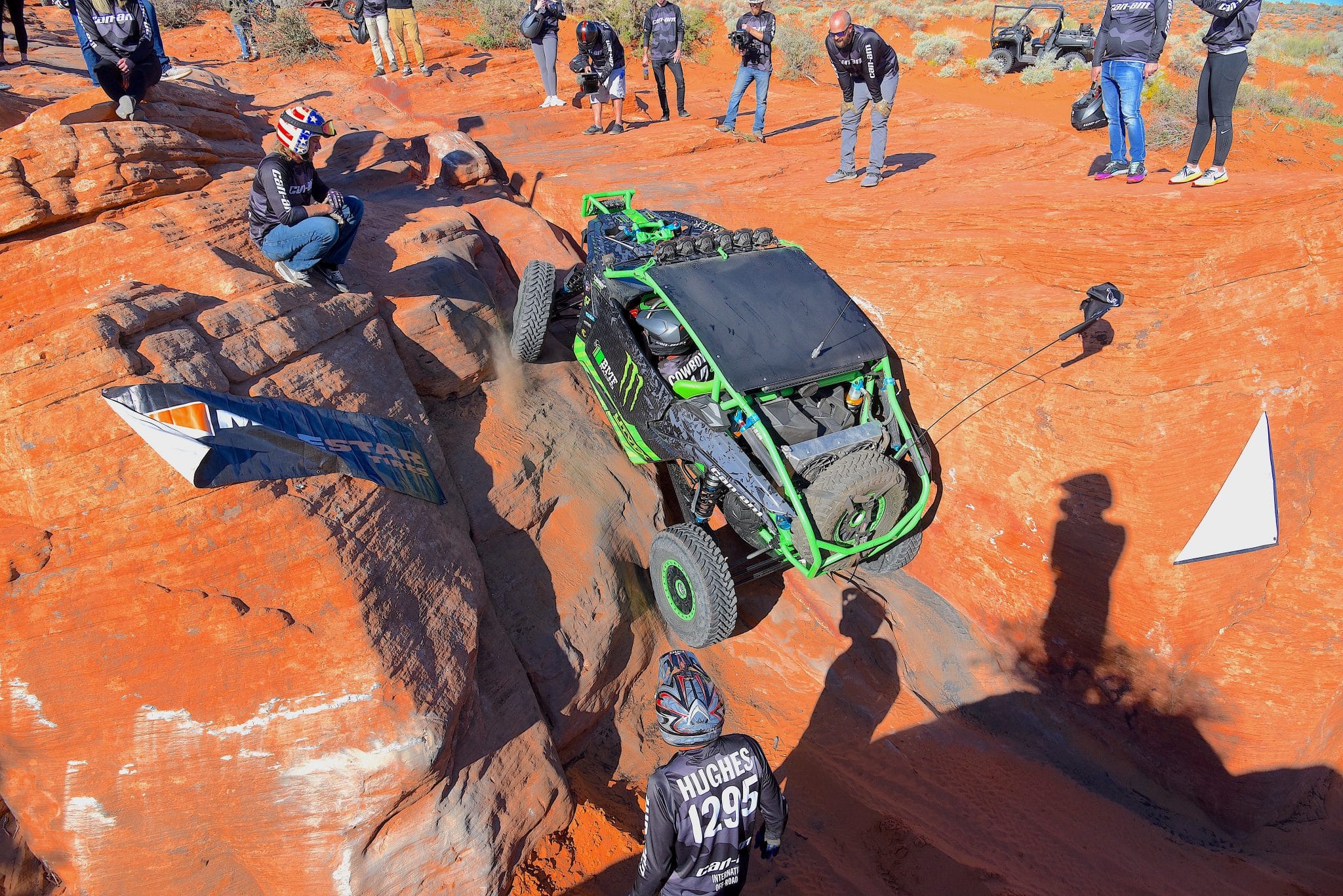 Rally and drift phenom Ken Block was along, but we felt luckier to have King Of The Hammers champion Hunter Miller’s spotter, Chad Hughes and off-road guru and Can-Am ambassador Dustin “Battle Axe” Jones guiding our every move. You will see some hilarious talk and impressive driving from Dustin in our YouTube video. At one point he even wheelies a Can-Am Defender up a near-vertical grade. It was a treat having Chad and Dustin because we experienced some technical sections that we would not have tried without their help. Make sure to give Dustin a follow for some great content @dustinbattleaxejones on InstaGram.

It still took some guts to try a few rock features though we skipped some for lack of confidence. It was impressive how much traction we got in the car, though, and Can-Am had our Maxxis Liberty tires aired down quite a bit which made traction abundant. The Maverick has you sitting sort of low in the car which at times makes it tricky to see things directly in front of the car. For us it was a matter of getting a feel for exactly where the wheels are and how much space you must work with. It didn’t take long to get that feel though and the car seemed to defy gravity as it went right up ridiculous sections. 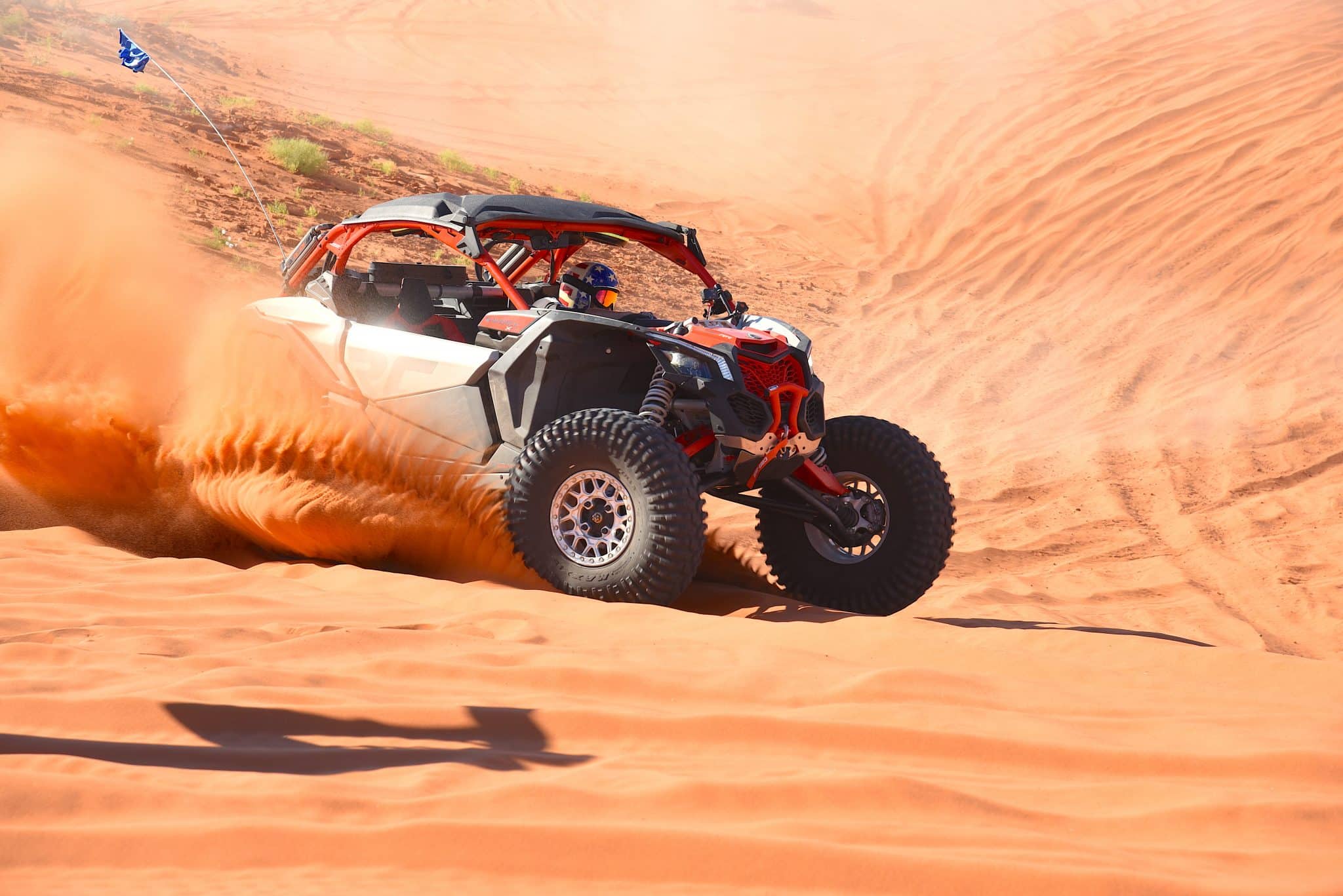 IF ITS NOT BROKE DON’T FIX IT

The Smart-Lok front differential and the availability of computerized Smart-Shox suspension were great upgrades in 22’ and remain impressive. Our Maverick X3 X rc has Smart-Loc but not Smart-Shox. Like in 2022, all X3s get the sophisticated Smart- Lok front differential and you can select four modes on the fly, including differential lock which we used frequently on the rock features we faced. Suspension travel hasn’t changed for ‘23, so you’ll get 22 inches in the front and rear of the X3.

CanAm encouraged us to put the pedal to the floor through the dunes and wide trails and we were reminded once again how impressive the power is. A full 200 horses is a lot but the controllability of the power is the nice part. Powering through corners was manageable while allowing you to accelerate as fast as you want. 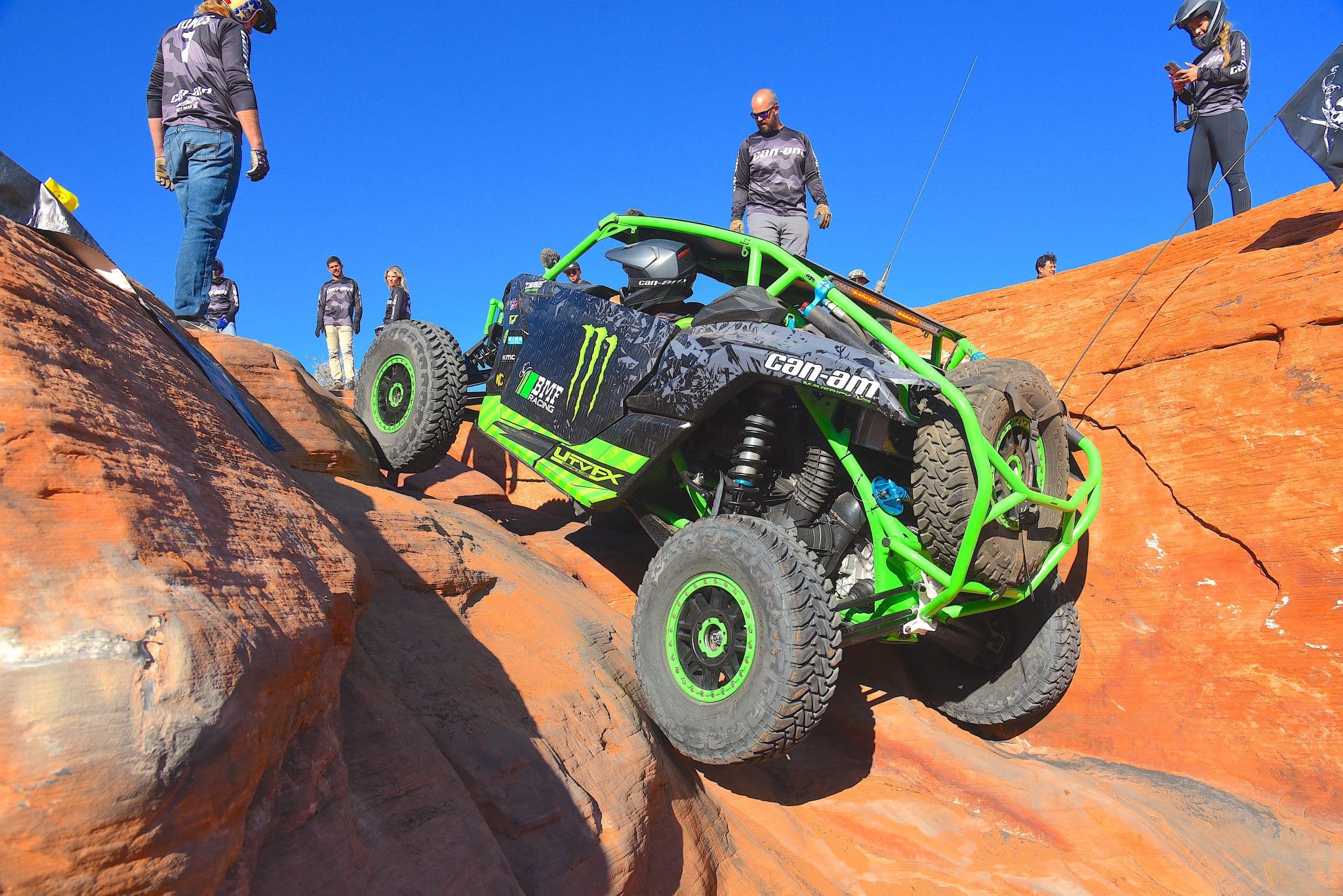 We do have a short video that captured the most epic moments of the ride. You can see it on our YouTube channel here. It doesn’t do full justice to how steep and intimidating the rock features are, so if you’re thinking of checking out the area, use a spotter. Having someone experienced outside the car that can tell you where to put the wheels is almost essential if you’ve never rock-crawled before. 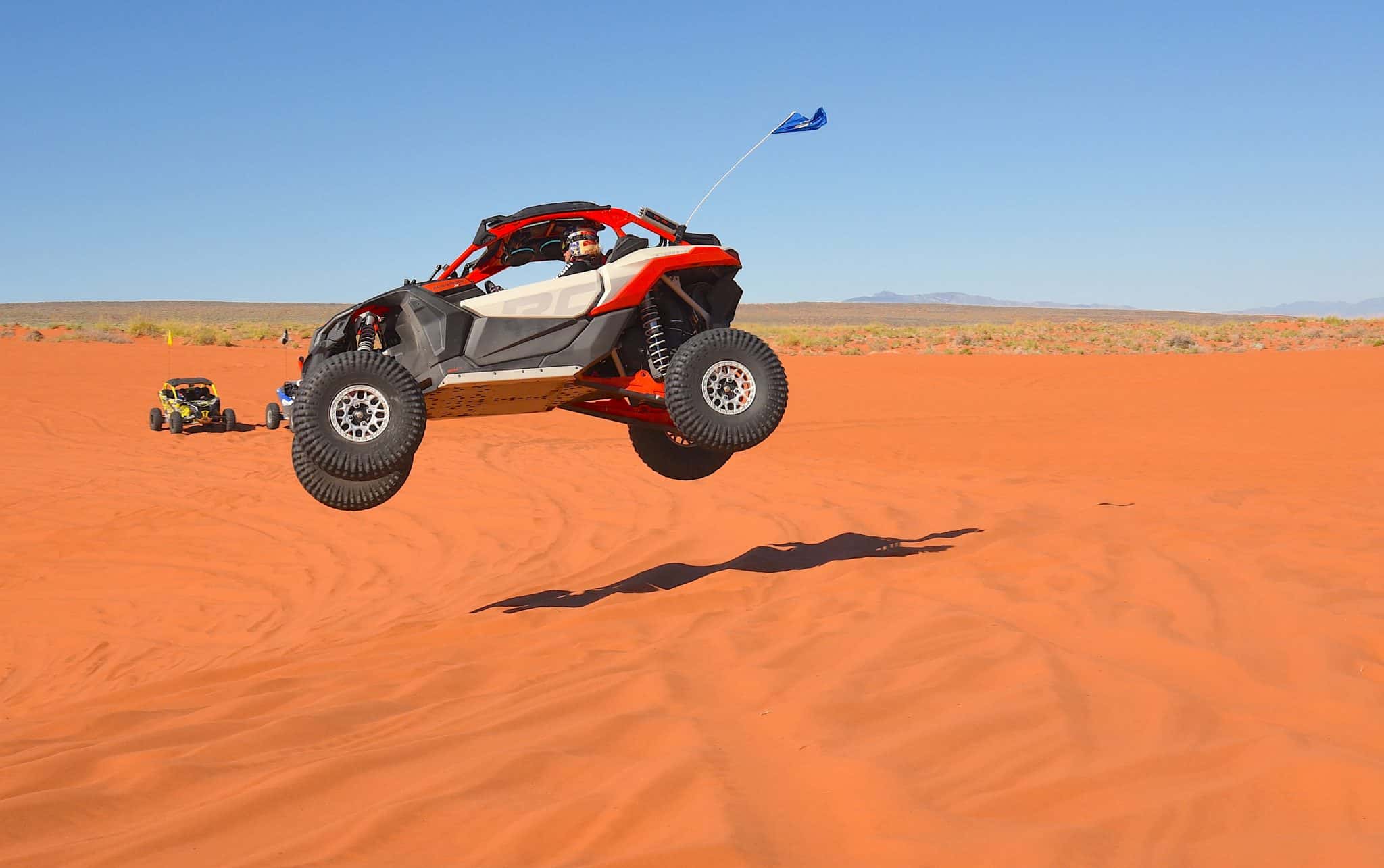 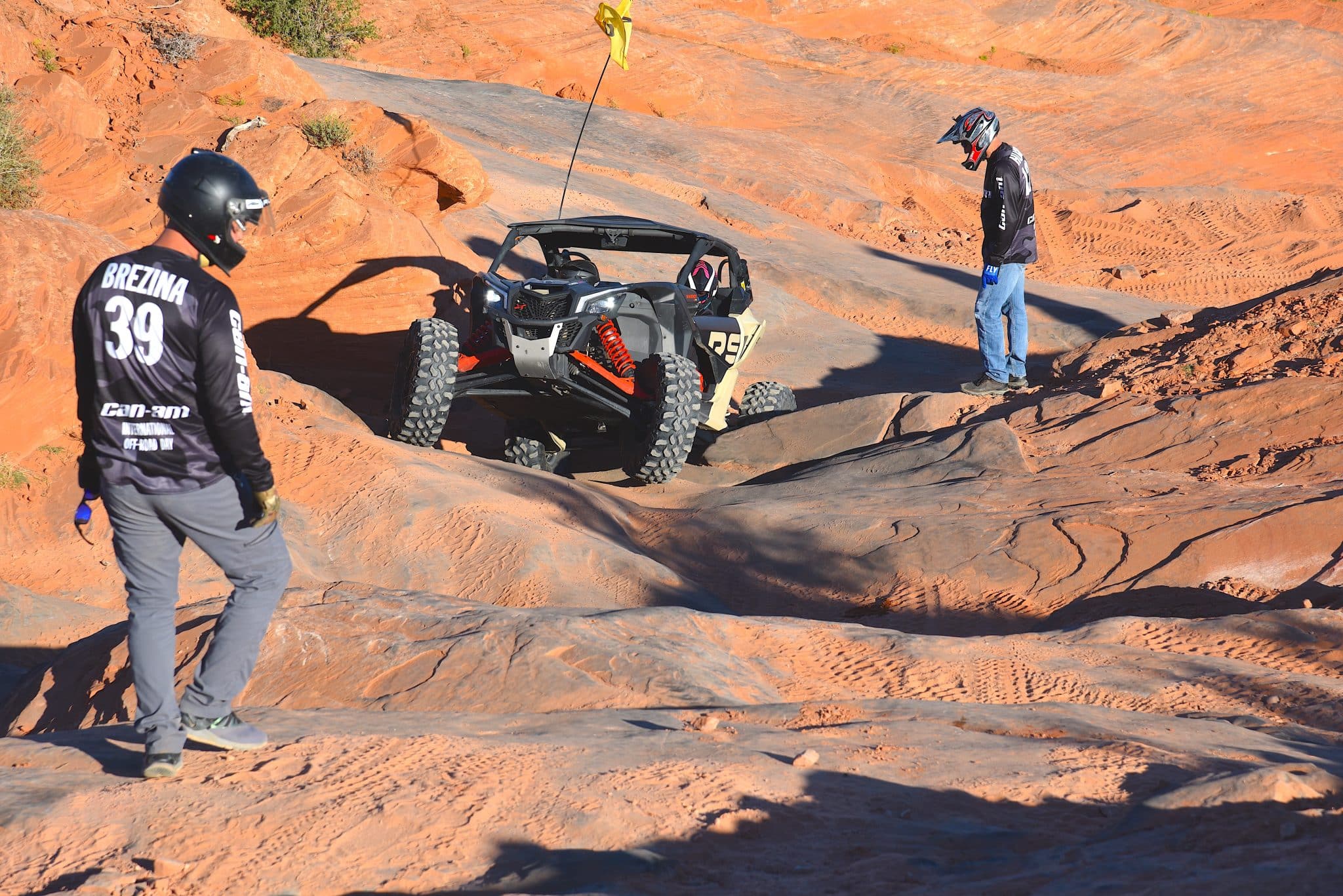