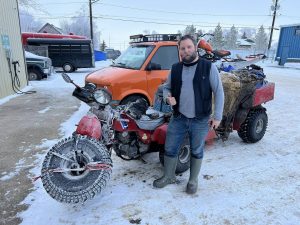 Matthew Webb is a fishing vessel deckhand and a veteran with the Canadian military. He’s also currently attempting a Guinness World Record by traveling coast to coast (and then some) on a 39-year old Honda three-wheeler. When all is said and done, Webb will have racked up 6,000 miles on his Honda. “I’m going to take a 1984 Big Red 200 ES from 100 Mile House, British Columbia, and go to Newfoundland, and then circle back to Nova Scotia,” Webb said in a video posted to his Facebook page. The main focus of this adventure is to raise money and awareness for the Bikers Down Society in Nova Scotia, a not-for-profit organization that provides financial assistance to motorcycle riders injured in collisions. Webb came up with the idea after losing his close friend, Anthony Morgan, in a motorcycle accident last year. 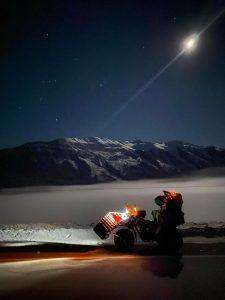 While his Honda Big Red is far from new condition, it is a Honda Big Red, so reliability should be covered. Most of his modifications have more to do with cargo capacity, which includes a spare tire carrier over the front fender. Webb is also hauling a trailer loaded with tools and parts. “If I do break down, I’m not going to tow the bike out. I want to fix it on the trail” says Webb. When we last checked in, Webb was already 1,355 miles into his journey. 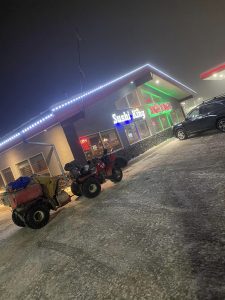 Webb is trying to raise $25,000 in this effort, and he has a GoFundMe page setup to help him accomplish that goal. His adventure began January 1, and he expects it will take three weeks to complete. He will make the official donation once he reaches Nova Scotia.