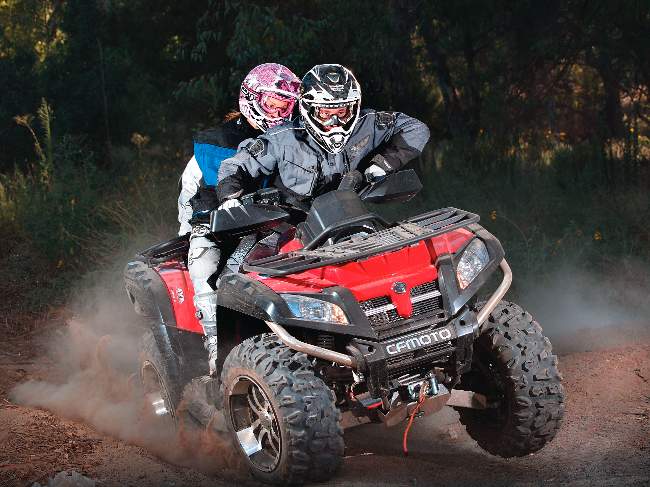 The ATV snob gene isn’t dead in the Dirt Wheels staff; it’s merely recessive. We like riding in the dirt so much that we’ll ride anything and everything, but given a choice between something sporty and something that seems as unsporty as a two-passenger utility quad, we lean toward the former.

In this case, though, we couldn’t wait to get the new CF Moto 800 two-seater. First of all, it’s a brand-new company making surprisingly good products (as we discovered when we tried the 2011 Z6 UTV in the August issue). But even more titillating, it’s a new member of a very elite club. It’s powered by a 799.6cc V-twin motor, making it one of the largest, most powerful and sophisticated machines in the ATV world. The motor is brand new for 2012—for that matter, so is the entire machine. When you put it all together, the CF Moto 800 generated more questions and interest than any quad we have tested in a very long time. 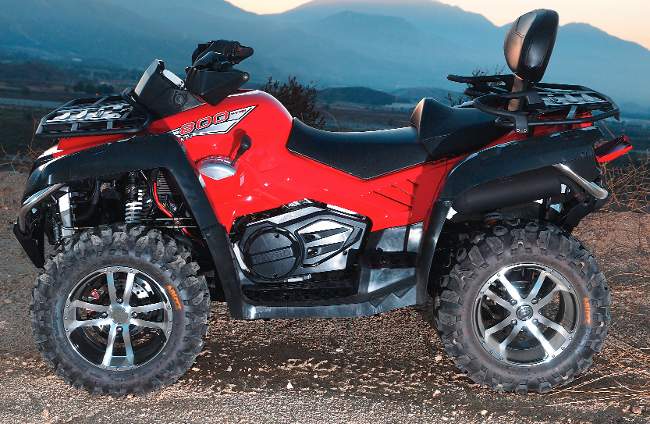 In many ways, the CF Moto can go toe to toe with its North American counterparts. The paint and finish are second to none.

In case you haven’t heard the name, CF Moto is an Asian company that specializes in utility quads with CV transmissions. You won’t find a 450 sport quad or a manual gearbox in the entire line. Until now, that line has focused on 500cc and 600cc singles. But with the coming of the 800, the company joins a very elite group as a maker of a high-tech, big-bore giant. It has an eight-valve, liquid-cooled, SOHC V-twin configuration with fuel injection. It was clearly inspired by the Rotax motor that powers the Can-Am Outlander, although it wouldn’t be fair to call it a copy. The fuel-injected DOHC singles in CF’s existing line show the firm’s competency in developing its own motors and reflect a certain amount of motor savvy. The 800 simply has more of everything. The continuously variable transmission is typical of this class of machine. It has high and low ranges available on a left-hand stick shift, as well as park and reverse. A double push-button controller on the right handlebar gives you the options of two-wheel drive, four-wheel drive or all-wheel differential lock. 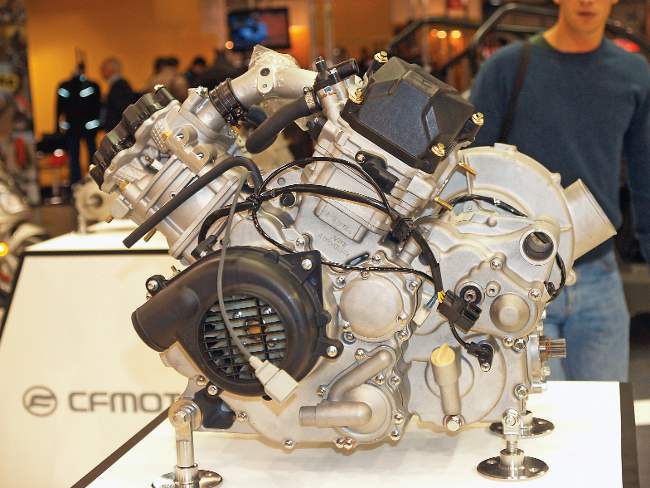 We first got a glimpse of the new motor almost two years ago at the Powersports show in Milan, Italy.

The chassis is sophisticated in its own right. It has double A-arm independent suspension all the way around with adjustable shocks. The fronts have piggyback reservoir dampers with compression and rebound adjustment, while the rears have only rebound clickers. Braking is handled by triple hydraulic discs with separate controls for front and rear. But what really sets CF Moto apart from existing machines in that class is the long list of standard equipment already mounted up and ready to go, which includes a 1000-pound winch, alloy wheels, hand guards, and belly and A-arm protectors. None of these are name-brand items, but the quality is acceptable. The quad’s appearance goes one step beyond acceptable; the paint quality and overall finish are excellent.

This particular machine is, of course, designed for two riders. As such, it has a wheelbase that is about 8 inches longer than that of a typical utility quad. There’s a removable passenger seat and backrest, as well as elevated passenger floorboards and grab bars that are built into the rear luggage rack. 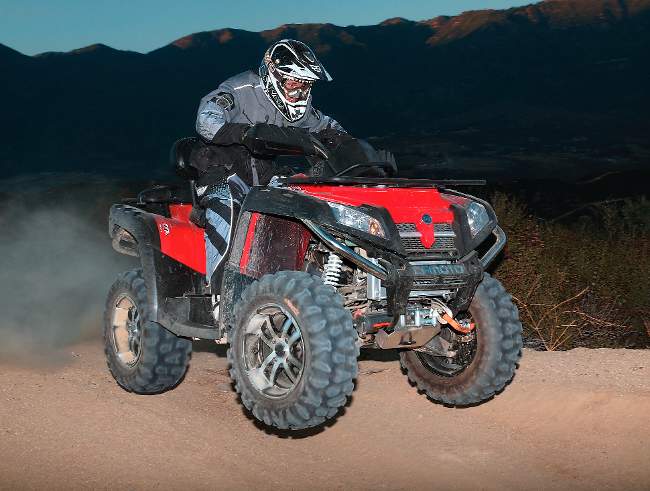 Going solo on the CF Moto is fun too. It’s powerful, predictable and very, very big.

So how’s the new motor? Great! It’s smooth, powerful and virtually free of glitches. The CF starts easily and idles evenly without the need for much warm-up. Like the company’s UTV that we tested, the fuel injection is impressive. There are no hiccups or stumbles anywhere along the way. Most of our testing was done on hot days with the thermometer flirting with the 100-degree mark, and that kind of weather often makes a carbureted motor run rich and dirty. Not so in this case. The CF Moto’s engine is indifferent to weather and elevation. It has a very satisfying feel too—big and rhythmic, with kind of a Harley-esque taste. It doesn’t buzz or vibrate; rather, it rumbles and throbs. 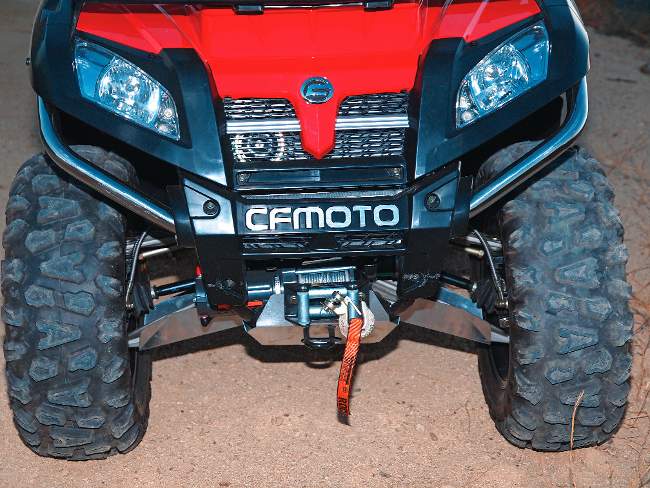 With the CF Moto, you get a lot of extras that don’t cost extra. The winch and the alloy wheels top the list.

In performance, the V-twin is solid. It makes excellent torque at the bottom of the range and then accelerates in a very linear fashion all the way up to a wild top speed. For the record, we don’t know how fast it goes. We didn’t have the room—or the nerve—to stay on the gas past the 70-mph mark, which is plenty fast for a quad this big. At that point, it was still accelerating so hard that we don’t doubt it could blow past the 85-mph mark. Still, there are more powerful ATVs on the market. The Can-Am 800 and 1000 Outlanders both will out-accelerate the CF, as will a Polaris 850 Sportsman. The CF is more akin to the Kawasaki Brute Force 750 in power, although the Kawasaki is more free-revving and has quicker throttle response. The CF isn’t snappy, but has power that builds and builds. If you punch the throttle at 50 mph, you get just as much yank as you would at 10 mph.

In overall handling, the CF Moto feels exactly as it should: big. It’s a mammoth ship that makes you feel more like a captain than a rider. Accordingly, you have to pick the type of terrain you tackle with common sense. Extreme side-hills and off-cambers aren’t a good idea on this quad, or anything in the 800- to 1000-pound class. Having said that, the CF does extremely well in some situations. There are two areas where it really excels. First, in broad, flat turns, it’s one of the most forgiving ATVs we have tested. It’s so long that everything happens very predictably. The rear end slides around easily with a little gas, and when you chop the throttle, it steps back into line without any sudden grabs or jerks. If the terrain has some light choppiness, the CF’s mass actually helps keep the chassis steady and stable. The suspension is very good. 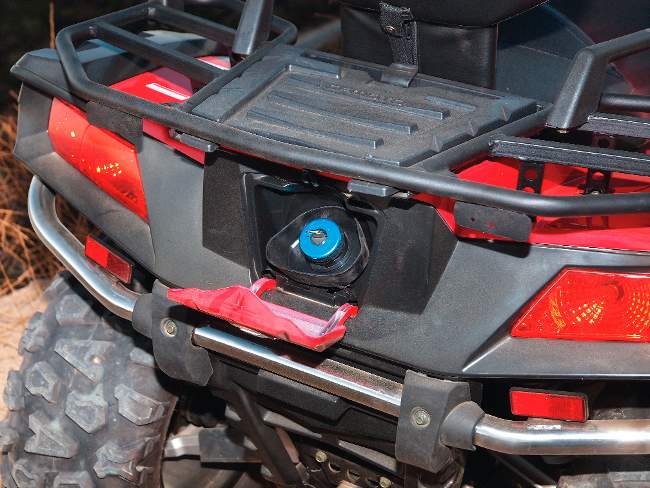 You can spend a whole afternoon looking for the gas cap.

Another area where the CF was surprisingly capable was rock climbing. When we were following a Honda 500 Foreman, we discovered that the big two-seater actually had an advantage in rock steps and steep hills. It’s so long that the front end stays well planted where other utility quads get very light in front and even try to loop out. But, the CF will run out of ground clearance for the same reason—sheer length. And you should also remember that it’s no wider than a conventional quad. Tipping is a real concern, and body English is less effective than it would be on a lighter quad.

The main reason that most riders shop for two-up quads is because they want to share their adventure with someone. The two-up experience is great fun on the CF. The passenger area is very secure with well-placed handholds and a very cushy seat. It’s much thicker and softer than the front seat. The extra padding helps allow the passenger to see the trail ahead, which makes the experience more fun. 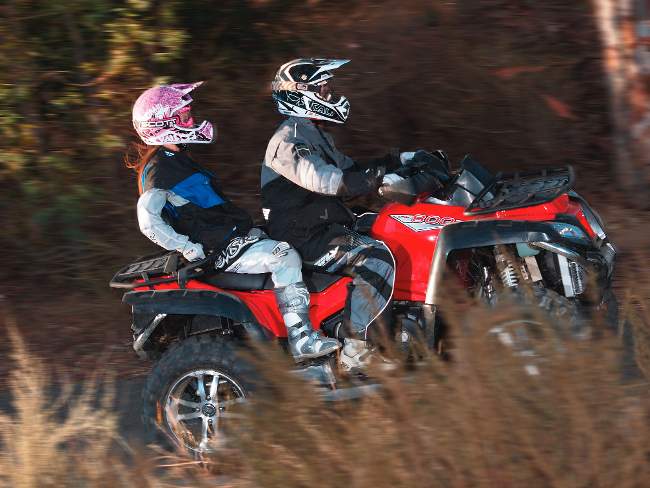 Bring a friend. The passenger accommodations are actually more comfortable than they are up front.

With a short passenger, the backrest is perfectly placed; it extends up to the shoulder blades for someone measuring around 5-foot-3 or so. Taller passengers might have problems with it barely extending past the lumbar area.

You need to choose your terrain with the passenger in mind. Everyone has a different threshold here. Some passengers have limitless faith and trust in their pilot; others are ready to bail out at the first sign of trouble. Either way, you should avoid certain conditions. Whoops are probably the worst enemy of the two-up ATV. Have you ever noticed how difficult it is to keep items strapped to the rear luggage rack in whoops? The farther you place items behind the center of gravity, the more the machine acts like a catapult. If your luggage is a human being, go slow in big bumps.

Cornering with two people is surprisingly easy. The CF loses some of that easy, predictable handling, but it’s still very docile and frankly much better than we expected. 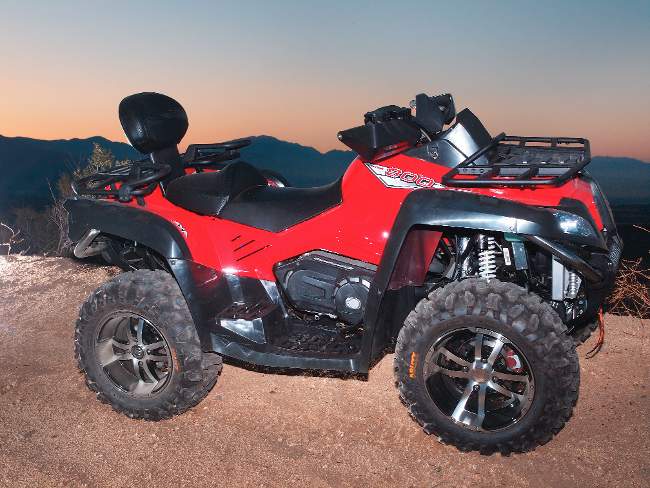 The unit that we tested was among the first eight in the U.S. As such, we expected to suffer through the usual array of hiccups. We were surprised that nothing broke in two weeks of almost daily use. There were only minor things like loose grips and the need for shifting adjustment. Our test quad would have been absolutely acceptable for customer delivery.

We can offer some suggestions that we would like to see CF Moto address in the future. The rear brake isn’t especially powerful. The left-hand lever is linked to the right-foot pedal by cable, which can create an awkward situation where the toe of your boot can be pinched under the pedal if you use only the hand brake. And if ever there was a machine that needed power steering, this is it. It takes a lot of muscle to maneuver the big CF at low speed.

On the other hand, value is what this company traditionally offers, and power steering would only push up the price. No, you don’t get name brands like Warn or Maxxis here, but you aren’t paying for them, either. The people at CF Moto haven’t set the final price, but we expect it to be about 20 percent lower than a Polaris, Arctic Cat or Can-Am in the same category, putting it in the $9000 range. And look at it this way; that’s only $4500 apiece if you divide it by two. Now that we think about it, the two-up ATV makes more sense than ever.