COULD THIS KTM BE THE NEXT CFMOTO?

KTM quads were ranked as some of the best high-performance machines you could buy. We were all bummed when they were dropped from KTM’s lineup some years ago. However, maybe there’s a shot of them making a come back with a different badge. That has potential based on the new deal CFMoto worked out with KTM. One of the main complaints about the KTM quads was they cost considerable more than what you’d spend to get a Honda or Yamaha 450. Perhaps CFMoto would be able to produce an almost as good version at a much lower cost. 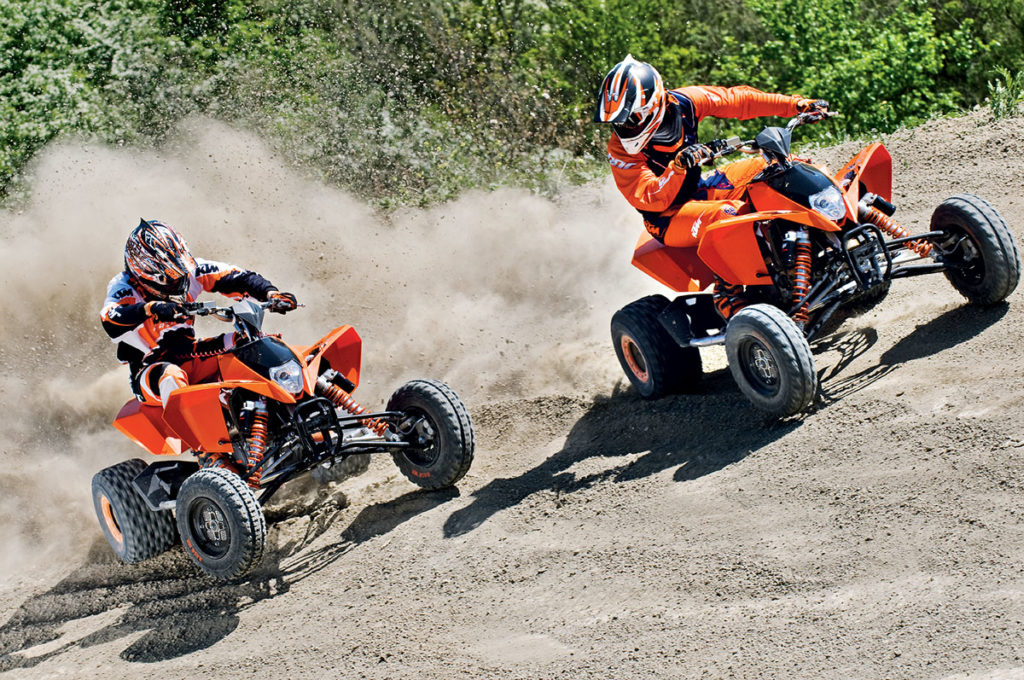 We admit that this is mainly hopeful speculation, because ATVs weren’t mentioned in the press release. The joint venture referred only to motorcycles being manufactured at the new production facility, but plans could change when they investigate full potential. At the moment there’s no competition to Yamaha’s YFZ450 and Raptor 700. For people in the market for those Yamaha sport quads they’d surely consider a CF/KTM 450, 550 or 690. You also can’t rule out something even larger like the V-twin 990 KTM that we’ve seen in Europe. 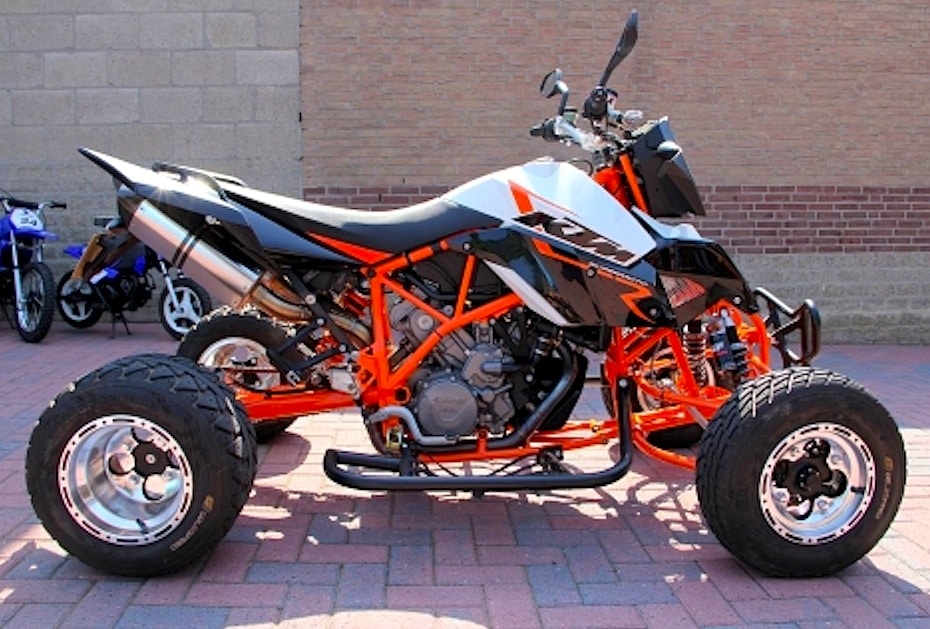 Anyway, if you’re wondering about the details of this CFMoto and KTM joint venture you can check out the press release they sent us below:

PLYMOUTH, MN – Capitalizing on a very successful 2017 calendar year, CFMOTO and KTM kicked off the official start of their joint venture project with a ground-breaking ceremony of their new production center on March 28th, 2018. 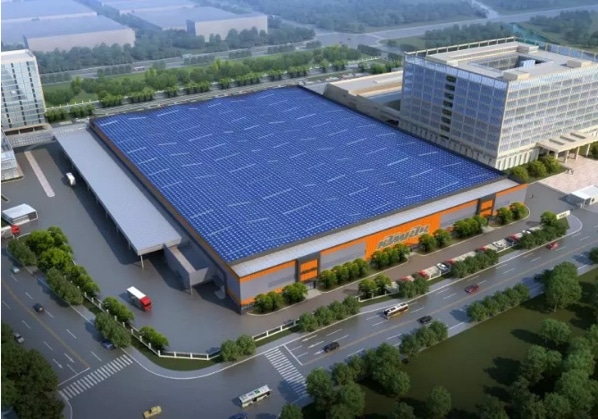 The joint venture agreement was signed on Oct 11th, 2017 and will result in an estimated annual output of 50,000 motorcycles. Ten different motorcycle models will be designed and put into production at the new 1 million square foot facility. When completed, the new production facility will occupy an area of 10.57 acres and will consist of offices, production, R&D centers, test ride areas and a retail center.

Minjie Lai, General Manager of CFMOTO and KTM AG COO Mr. Harald Plöckinger were on hand at the groundbreaking ceremony. Both reflected on how far both companies have come in the past six years in their speeches. “It was November 2011 that CFMOTO and KTM established the original strategic cooperation agreement. CFMOTO started as a KTM importer in China and later started the CKD business. CFMOTO is excited to play an increasingly important role in KTM’s strategic global development” said Lai in his speech. 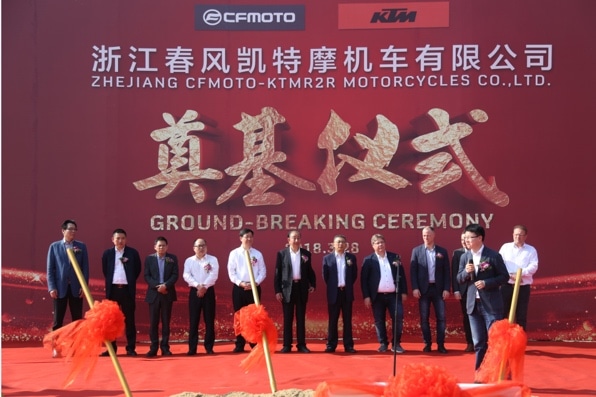 Lai also said that “the joint venture will bring CFMOTO’s R&D and manufacturing capability to a whole new level. CFMOTO will benefit from KTM’s advanced technology and profound experience from years of being a leader in the power sports industry. KTM recognized how our manufacturing capacity, supply chain management and channel development could help implement their global strategy.”

In closing his speech, Lai emphasized CFMOTO’s continued commitment to growing the power sports industry. “We believe what we have achieved in 2017 lays a solid foundation for a tremendous 2018. CFMOTO will continue to be 100% committed to the power sports industry and enhance a greater cooperation with our trustworthy partners, while working to build a magnificent future together.” 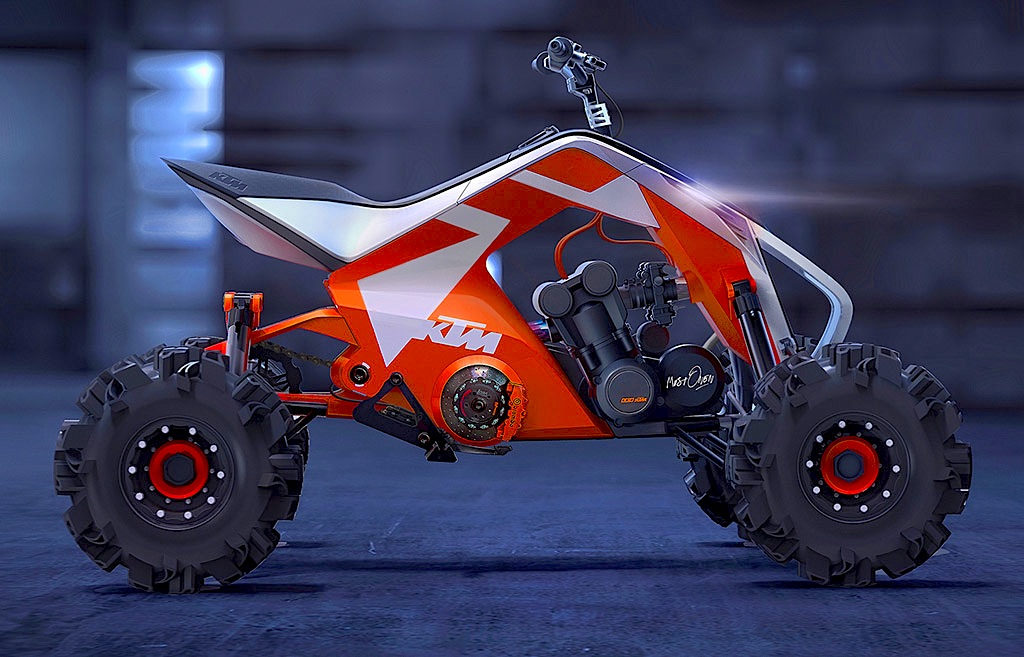 CFMOTO USA is a premier off-road vehicle manufacturer based in Minneapolis, MN, and CFMOTO International is based in Hangzhou, China. A recognized leader in power sports since 1989, CFMOTO was first introduced to the North American market in 2006 and has quickly become recognized as a manufacturer of affordable quality, high-performance power sports vehicles in the ATV and side-by-side markets. CFMOTO has over 300 strong, multi-line U.S. dealers and is represented in over 80 countries across the world.