The 2017 Wiseco ATV Motocross Championship began the new season at Daytona international Speedway in Florida recently. Chad Wienen was there to defend his 2016 title and he was met with strong challenges from many other riders. Joel Hetrick and Thomas Brown seemed the most determined to reached the checkerd flag ahead of Chad.

The $100 Bell Helmets Holeshot Award was up for grabs as the main gate dropped. Hetrick used his momentum from his heat race win to fire off the start and grab the early lead. Upperman and GennUSA Racing’s Nick Gennusa was in tow, while Wienen sat in a top-five position. Wienen wasted no time and made the pass for a podium position after the first lap was complete, and then second shortly after that. Wienen set his eyes on Hetrick who already had a gap on the rest of the field. 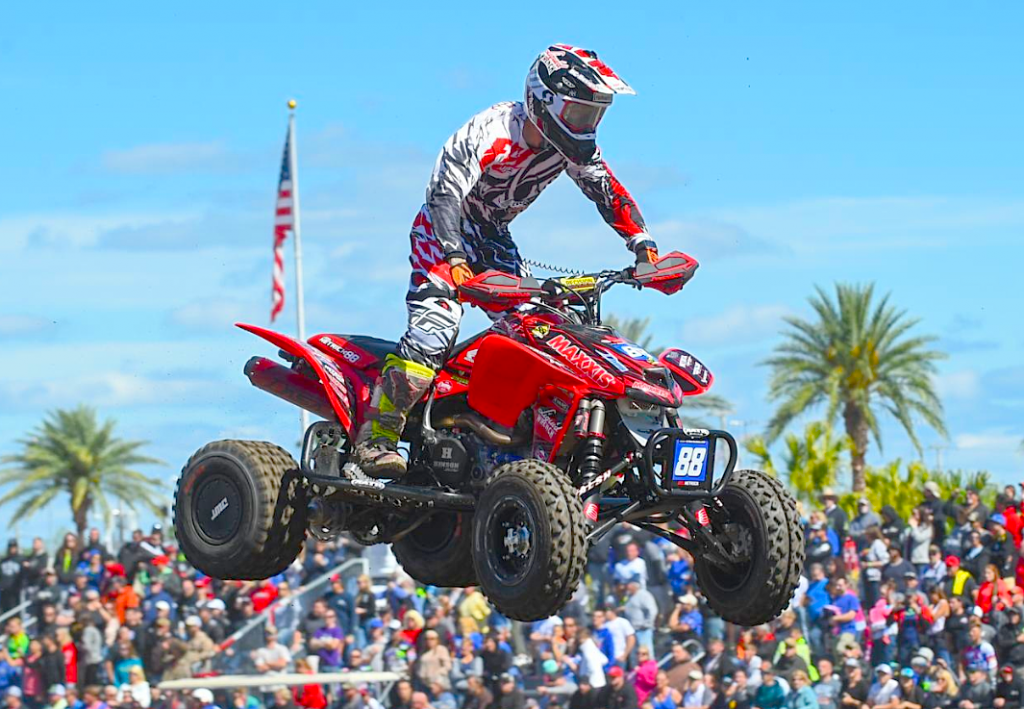 Hetrick and Wienen maintained a four second gap between each other for the first half of the race, until Hetrick bobbled coming out of the second turn. “I made a mistake, but it didn’t cost me too much this year,” said Hetrick. “Of course I’m a little upset at what happened. I went wide and caught the Honda banner and it tossed me off. I’m lucky that I got up and got going as quick as I did.” 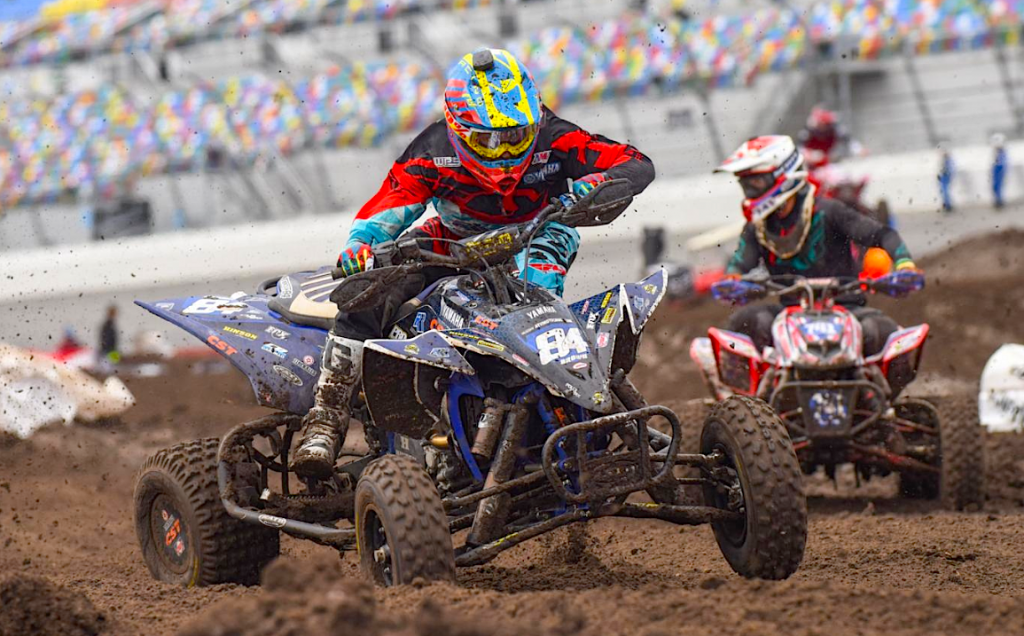 Once in the lead, Wienen ran his own race while the battles continued behind him. After getting back up, Hetrick was running in fourth. He was able diligently work his way around Upperman and put the pressure on Nick Gennusa.  With much of the focus was on Hetrick recovering from his mistake, Root River Racing/CST Tires’ Thomas Brown was quickly rising through the ranks. After an unfavorable start, Brown rode in fourth. With only a handful of laps remaining, Gennusa held off Brown, but with only three turns to go Brown would make the pass and steal the last podium position away from Gennusa. 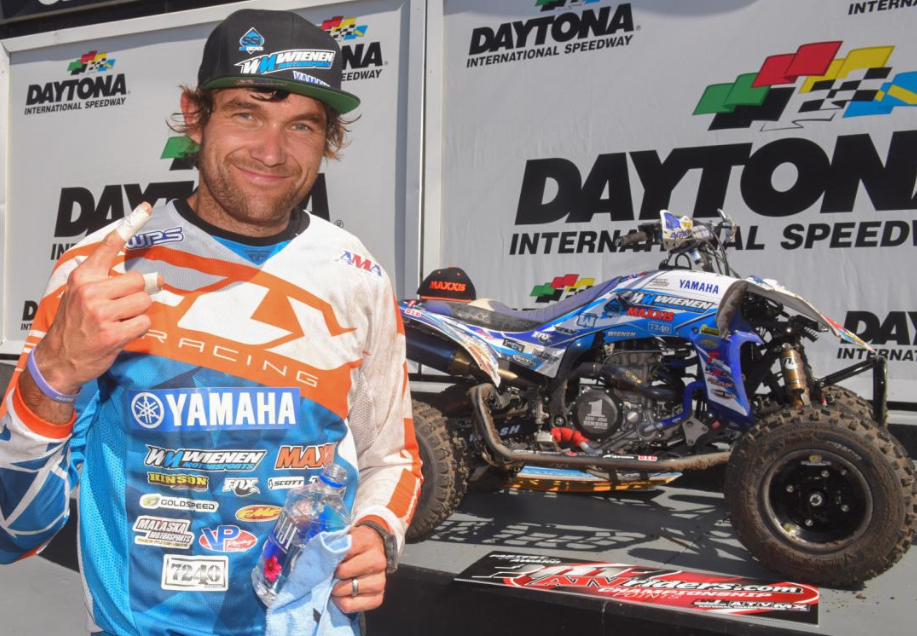 Wienen defended his 2016 ATVSX win, with Hetrick crossing the finish line behind him in second and Brown rounding out the main event podium. Gennusa placed just off the podium in fourth, and Upperman rounded out the top-five finishers in the opening round. Walsh Racecraft/Honda’s Parker Wewerka had an impressive showing for his pro debut in sixth.

“Lines on the track were crossing everywhere so you had ride very precisely. My goal was to go out there and not make any mistakes,” said Wienen. “I know Joel rides hard so when I saw him down, I knew I had to be cool, calm and collective to win the race.”

“Over the years my mistakes here at Daytona have cost me big time.” said Hetrick. I’m just glad to be up on the podium, because that was my main goal coming into the race.” 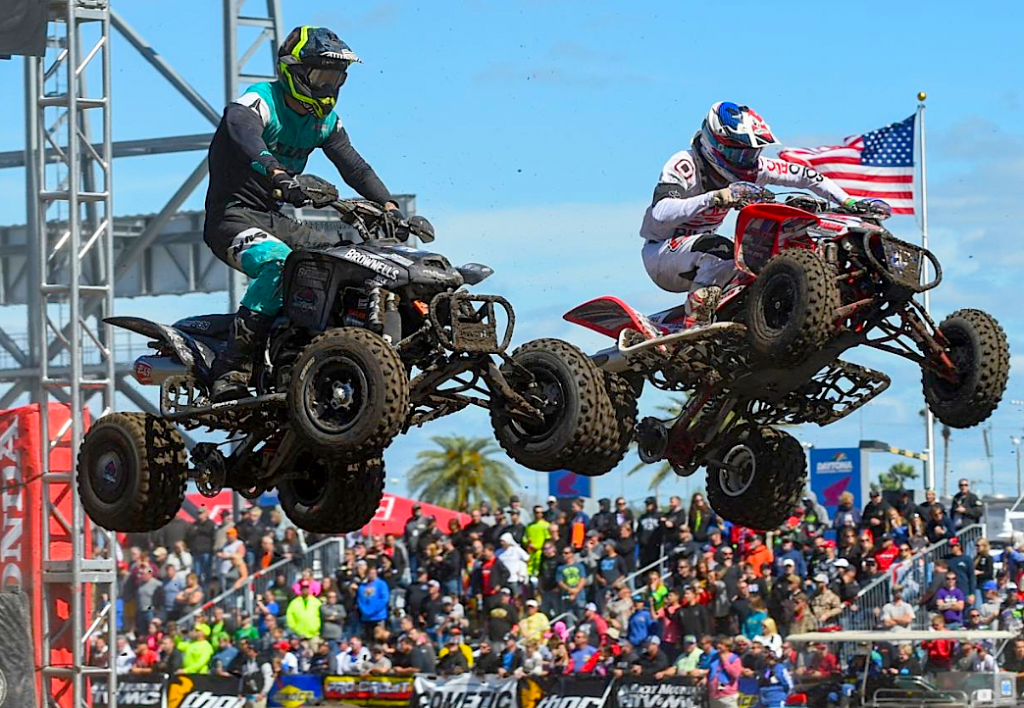 It was a close fought battle between Hondas and Yamahas.

Racer TV captured LIVE streaming of each qualifying round and main event, both amateur and pros. To watch the archived footage head over to RacerTV.com. A highlight show featuring the event will be aired on the MAVTV later this spring. The 2017 Wiseco ATV Motocross National Championship resumes with a return to the traditional motocross format on Saturday, April 1 at the popular Underground MX in Kemp, Texas.

The Wiseco ATV Motocross National Championship presented by CST Tires, an AMA National Championship, is the nation’s premier amateur and professional ATV motocross series, hosted at top motocross facilities nationwide. The 11-round series features the Nation’s best racers, teams and sponsors, and is America’s largest and longest-running ATV national motocross program. Since 1985, the series continues to expand and produce top talent from the amateur ranks, while premiering the professional class. For more information, please visit www.atvmotocross.com.

Kolpin DirtWorks has everything you need to get work done!

WHERE & WHEN TO RIDE IN THE USA, MIDEAST!