You may have noticed several companies advertising aftermarket A-arms with a new style of caster adjuster. The caster angle of your quad’s front end dictates how fast it will react to steering input. A negative caster angle will result in a twitchy front end; too much will give a lazy, slow turning sensation. Picture it this way; a chopper has a huge amount of angle in its front end. It turns slowly and not very precisely. A tricycle has very little angle to its front end and if you turn the bars quickly, you might be going over the bars.

Anyway, your quad acts off of this principal as well. The relationship between the top and bottom of the ball joints dictates how the quad will steer.

For tight, motocross or woods riding you may want a fast-acting front end that will get you in and out of the corners quickly. In the desert, you’ll want a lazier feel, making the quad more stable at high speeds. 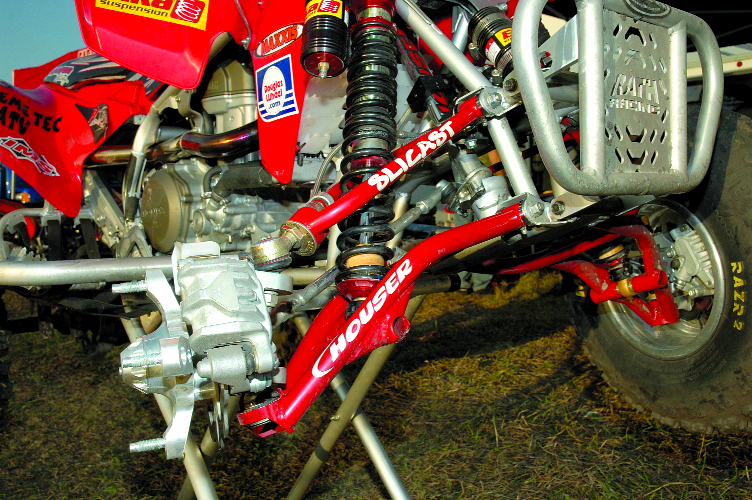 It’s not uncommon for a new quad to come from the factory with this setup wrong. For example, the Suzuki King Quad, the first year BRP DS650, and Cannondale’s FX400s all have a twitchy steering front end as a result of not enough caster. The KTM powered W-Tec Eraser has too much camber, making it hard to steer.

To test out Houser’s new Slicast adjustable A-arm kit, we had them equip a 2006 TRX450R with their maximum ground clearance XC arms that retail for $1000 a set. We then met up with the Houser folks at a recent GNCC event.

First, we had them give us a quick lessen on how the Slicast system adjusts. It’s really quite simple. With the front of the quad on a stand, all you have to do is loosen a large 22mm nut on the top A-arm, pull the Slicast cam away from the arm, turn it to the desired position, slide it back in the arm and retighten the nut. There are six adjustments of .4 degrees each positive and six adjustments to the negative side.

Houser claims that their Slicast allows you to easily adjust your caster independently of the camber. Camber is the angle that the top of your tire leans into or away from the chassis. Typically an ATV’s front end will have a degree or two of negative camber, allowing for a better contact patch when turning. 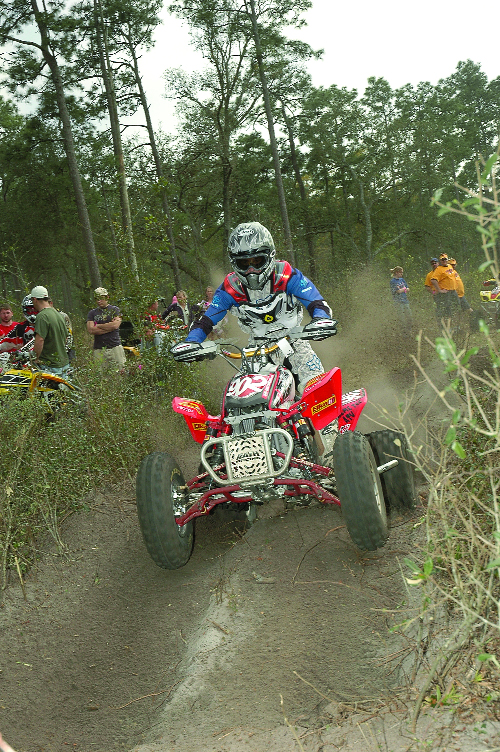 To start our test we had the Houser’s patent-pending adjuster cam in the neutral setting, which on these arms is the same as stock. After a few minutes of riding we had them rotate the cam forward to give it the maximum 2.4 degrees of positive camber. We rode the Honda for the same amount of time, then changed it to 2.4 degrees of negative camber and tried that out as well. With all of the parts clean, it takes about a minute to adjust each side of the quad.

It wasn’t hard to notice that the quad’s steering action was greatly affected. Our riders preferred the settings from neutral to all the way positive. This gave a more controllable feel and it was easy to tell what the quad was going to do when we sawed back and forth on the bars.

For the faster track we were testing on, the negative position was a bit twitchy. Although the Honda steered ultra quick and precisely, it felt too quick and you had to use more body English just to keep from getting tossed off of the seat.

Houser’s $1000 Slicast A-arm kits worked well and take a lot of the guesswork out of properly setting up your quad. Along with the set of Elka shocks, this test Honda was one of the best working cross-country machines we have tried. However, one of the better things about Houser’s products is their availability. Houser makes all of their components in-house and they claim every part they fabricate is always in stock and can be shipped from their production facility in Green Camp, Ohio within one day of ordering it. To order your set of Slicast A-arms for the Honda TRX450R, Yamaha YFZ450 of Suzuki’s LT-R450, dial