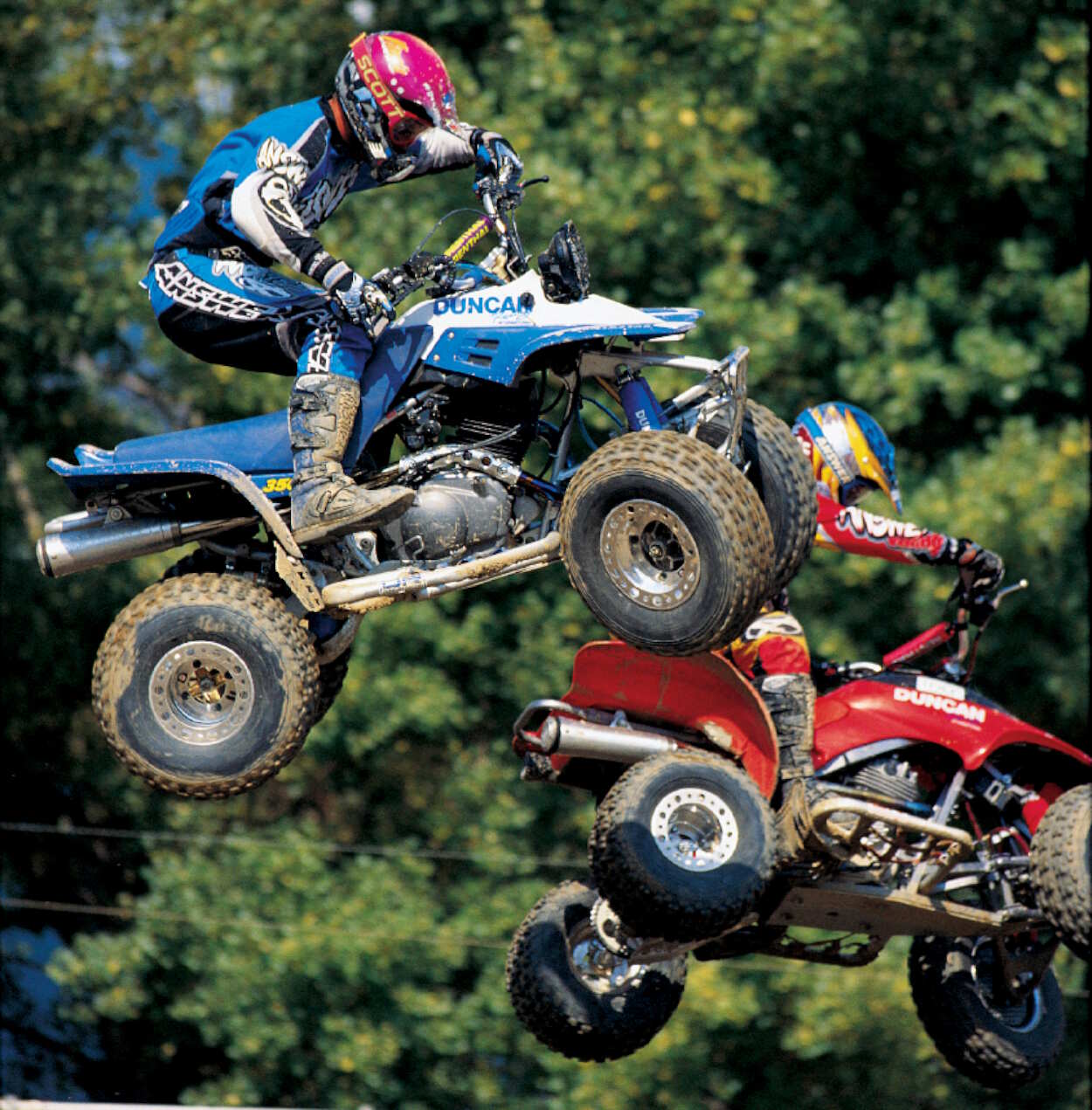 When it comes to reliable performance, Dun­can Racing is extremely confident of the products that it sells. So confident, in fact, that it offers a 30-day, 100% money-back guarantee with all of its performance products. If you are not happy with the performance, quality, or reliability of any Dun­­can Racing product, send it back and your money will be refunded.

We wanted to put Loren Duncan, the owner of Duncan Racing, to the test, so we had his shop modify our stone-stock Honda 300EX and Ya­ma­ha Warrior for a comparison shoot­out. We wanted to see for ourselves if his guarantees stood up to our de­manding standards. We told Loren we wanted both machines to run strong­er, without sacrificing reliability, and not to make them “race”-only motors. Both machines should be all-around better play quads that could be “play”-raced but had tractable and easy-to-ride powerbands. Loren accepted our challenge willingly. 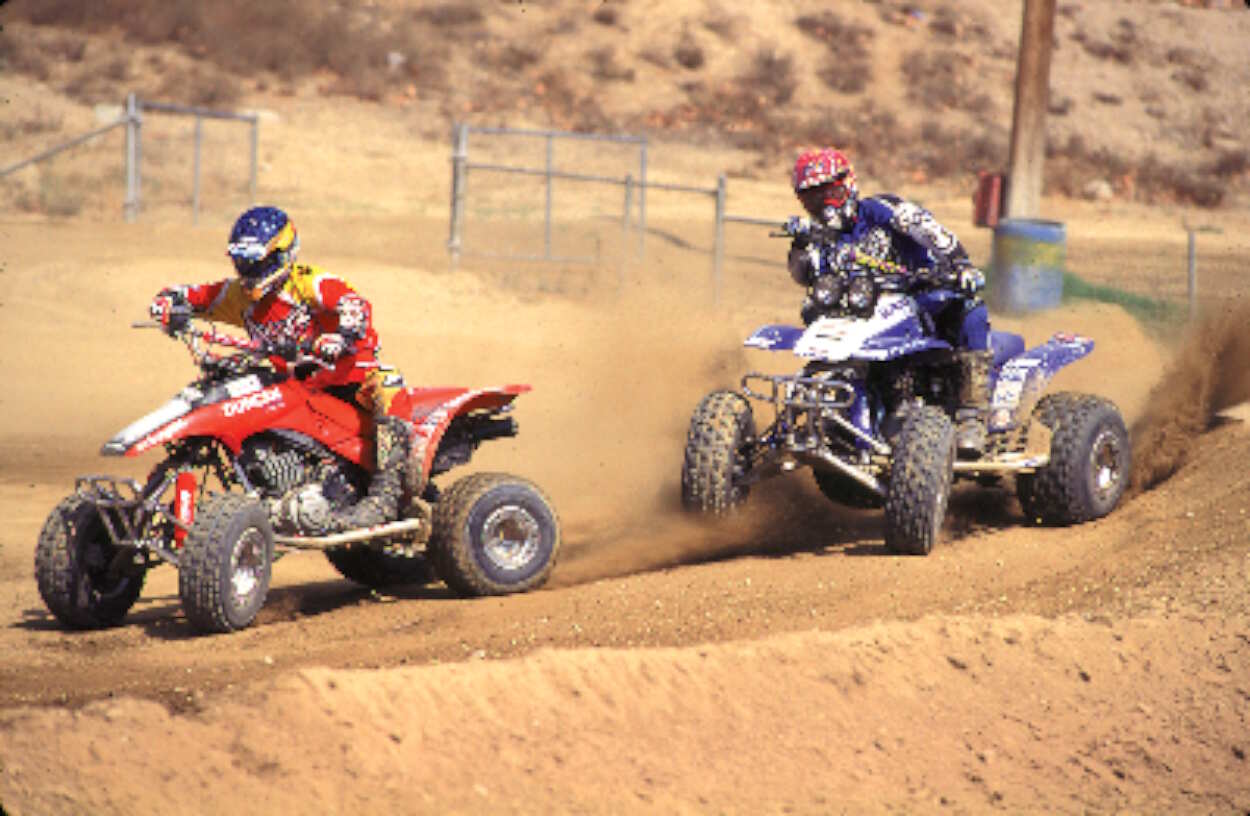 DR equipped both our 300EX and War­rior with its “National” package en­gine performance kits. This consists of a hotter cam, porting and three-angle valve job, heavy-duty valve springs with chromoly tops, Wise­co high-compression piston, Su­­per­Trapp exhaust system, Keihin 38mm PE carb, K&N air filter, and Out­­er­wears filter cover. The Warrior al­so gets a Pro Flow air cleaner flange. All of this costs $1149 for the 300EX and $1089 for the Warrior. For an additional $60, DR will al­so ma­­chine the stock flywheels for quick­er revs and smoother power.

CHASSIS MODS FOR THE HONDA

CHASSIS MODS FOR THE YAMAHA

Our Warrior also came with all the same chassis components as the Hon­da EX, with the addition of an RPM axle locknut ($54.95), an alumi­num DR rear grab bar ($33), and an OMF Glyde skid plate ($54.95). It also came equipped with Douglas Black La­bel wheels with OMF reinforcement rings and ITP Holeshot tires on the front and back (22×7-10 fronts and 20×11-9 rears).

Maxima engine oil and brake fluid were used in both machines along with Trick Racing gas. Loren Duncan likes to use the high-octane Trick gas for his machines but says that either machine can be run with high-octane pump gas with no ill effects.

PUTTING THEM TO THE TEST

To see how well these modified sport quads performed, we took them out to Glen Helen Raceway for an ex­tensive track testing session. Our test crew did laps aboard each machine separately, then faced them off against one another. We wanted to de­termine how well each one accelerated, how smooth the power came on, where it signed off and which one hooked up the best.

Since we had left the suspension stock on each machine we had to be careful in the gnarly whoop sections. The increase in pow­er on both ma­chines made both of them much hard­er to control in the rough parts of the course than before. With the in­crease in power, these kits give your ma­chine you have to do something to off­set this with some sus­pension im­provements. We plan on beefing up and replacing the suspension components on the EX and the Warrior in an upcoming issue to keep pace with the increased engine performance.

In the battle of engine displacement, the stock Warrior engine al­ready has a substantial edge in size, dis­placing 348cc to the Honda’s 281cc. Tech-wise, the Honda has the ben­efit of a four-valve engine design over the Warrior’s dated two-valve de­sign. In the battle of carburetion, the stock Warrior also has the edge, with a 36mm Mikuni over the Honda’s smaller 32mm Keihin. The Warrior al­so has a six-speed gearbox over the Honda’s five-speed box. This gives the larger-displacement, bigger-carbed Warrior the edge in a stock-versus-stock engine shootout.

Duncan Racing’s engine performance packages for the Warrior and the EX continue this battle among these sport quads. Each ma­chine is on equal footing, carb-wise, with DR’s 38mm Kei­hin carbs being installed on both. The porting, cams, valve jobs, and ex­haust systems on the two ma­chines help broaden and strength­en the ex­isting powerbands without any ap­parent loss of reliability. The big difference, though, is how much the Warrior engine comes alive with the DR engine kit.

“Our engine performance packages for four-strokes are designed to in­crease the power and smoothness of the existing motor,“ says Loren Dun­can. “It is essential to use [the highest-quality] components possible to make a four-stroke run better. Un­like a two-stroke motor, you have to spend twice as much to get half as much power increase in a four-stroke. You have to be careful to balance the power increase against fu­ture reliability.”

In straight-up drag races, the DR Ya­ma­ha Warrior was able to retain its dis­placement edge and clearly beat out our modified Honda repeatedly. The power came on about evenly with both motors, but the Warrior had the edge throughout the power spread, and it revved out further. The mod­ified Honda felt like it hit hard and accelerated quick, but the modified Warrior was able to smoke it virtually anywhere on the power curve and rev out just that little bit further. This gave the Warrior the nod for smoothness and top speed, but the Hon­da still hooked up and revved un­til the rev limiter kicked in and stopped it short.

Even though the Warrior had the over­all edge on power in our modified shootout, our test riders ac­tu­ally preferred the Duncan Honda when racing on a tighter, more technically chal­lenging track. The Dun­can Four­Trax had the snappy power, and its quick­er and more aggressive handling chassis made it accelerate and power through the turns better than the slow­er-turning Warrior.

Our test crew came away im­pressed with how well both ma­chines ran. The Duncan-modified War­­­­rior had beaucoup power everywhere and out revved the modified Hon­da, but the FourTrax came on hard and could be ridden faster on a short­er, tight­er course. Both machines had con­siderably broader and strong­­er hits on the low, mid, and top ends of the powerband than their stock counterparts, but the DR War­ri­or had the biggest increase.

Overall, we would say that larger and heavier riders (over 175 pounds and six feet tall and over) might prefer the modified Warrior for its tractor-like torque, awesome power increase, and easy rideability. Light­­er or smaller riders (under 175 pounds and 5’10” or less) might be hap­­pier on the quick­er-handling, mod­­ified Honda EX. Either way, you will have a ma­chine that runs consid­er­ably stronger and is much more fun to ride than your stocker. Would we be happy enough to let Loren keep our money for both engine mods? You betcha!