EFI, The Next Generation of Fuel Injection

The invasion of the carb snatchers is almost complete. Almost every quad in America went to sleep next to a giant pea pod and woke up the next morning with a completely different personality. They became members of the fuel-injected world, and now things will never be the same.

Up front, you need to know that EFI is a good thing. By comparison, a carburetor seems like leaky technology from the bronze age that over-lived its natural lifespan. Fuel injection is more reliable, more precise and allows us to meet increasing regulations more easily. The flip side to that is that fuel injection isn’t tuner-friendly. If you want more performance, you have to be an MIT graduate student to even grasp what’s going on inside the Engine Control Unit (ECU, CPU, black box or whatever you call it) that orchestrates the interlocking pieces. It makes hops-ups more difficult, but not impossible.

Let’s be honest. Most quads make plenty of power. Very few are raced, and stock ATVs and UTVs have all the performance a trail rider really and truly needs. But need and want are two different things. We ride for fun, and power is fun. Unfortunately, virtually all ATVs must meet EPA emis-sion requirements, which requires lean fuel mapping, and that doesn’t help the cause. In California, those requirements are stiffer still, and most manufacturers make a single spec for all 50 states, thus California is affecting what you ride in Texas. Sad but true.


So if you want more performance for competition, somehow you have to crack the code of the black box to get more fuel into your motor. This is deliberately difficult. As a side note, Suzuki got in trouble with the California Air Resources Board for making the 450 Quadracer’s EFI system too easy to modify—that was the biggest reason that machine was taken off the market. So how do you break into the black box? First of all, you talk to your dealer or any aftermarket part manufacturer about the laws in your state. Then there are two ways to proceed. Either you add a piggyback device between the ECU and the injector that can modify the number of fuel pulses per minute, or you toss the entire processor and replace it. Method one is inexpensive but very limited. You can only work within existing parameters, and ignition advance, which is a key part of the puzzle, is off-limits. Method two gives you limitless possibilities, but is traditionally reserved for the manu-facturers themselves. In recent years, a company based in Australia called Vortex is also invading that turf.

We were so intrigued by the work that Richard Muuling at Vortex has done in this field that we arranged for a few days of testing with Duncan Racing out of Santee, California, to see what could be done with several different machines. We rode a 2006 Suzuki 450, a 2014 Yamaha YFZ450 and a Polaris RZR XP 900 Jagged X—all equipped with Vortex ignitions, and even used a 2009 Honda CRF450R motorcycle for further testing.

The Vortex X10 ECU is a self-contained unit that replaces the stock part. It takes very little time to install on any vehicle. It has four “clickers” that allow quick adjustment: one that allows you to select any one of 10 ignition advance curves, one for low-end fuel mixture, one for midrange and one for wide-open fuel mixture.It’s important to understand that all these factors interlock with other engine modifications. You can’t simply say that ignition curve number seven is the best for all quads, because each owner might have a different pipe or different engine modifications. Take the Yamaha YFZ, for example. It comes with a fairly restrictive airbox and a very quiet muffler, as is appropriate for an approved off-road vehicle in the U.S. The stock EFI mapping is pretty good for those restraints. If you want to keep your YFZ that quiet, you can still get a little more performance with more fuel and a slightly altered spark advance curve. But that’s not the real story. Getting a real performance increase out of an EPA-approved quad requires that you attack from at least three sides. You have to modify the intake and the exhaust, as well as the ignition. Doing any less is like building a house and forgetting to make doors and windows.


Our subject YFZ450 was lightly modified. The exhaust was a Duncan Fatboy 4, and the airbox was by Fuel Customs. The fuel was a 50/50 mix of pump gas and VP C12. Without a richer fuel mixture, those mods couldn’t reach much more than “Hey, I think that’s better.” On some quads, we’ve seen the same approach result in the reverse of the desired effect. The programmers at Vortex can only guess at the combinations of intake, exhaust and compression ratio that you have built into your quad. For most combinations, it’s best to start right in the middle of the fuel mixture range, on setting number five for all three fuel ranges. That’s the best-guess setting that the guys at Vortex have programmed into the unit.

In the case of the Yamaha, it liked a little more fuel in the higher ranges, so the best settings were 5, 6 and 6 for the low, middle and high ranges. That will wake up the YFZ, allowing it to run like it was designed to run. Remember, the Yamaha motor is based on that of the YZ450F motorcycle, which makes about 55 horsepower with the same head. The stock YFZ, on the other hand, is dumbed down to about 35 horsepower by emission and noise restrictions. By addressing the intake, exhaust and CPU, you allow the bike to run like it should.

So far we’ve only addressed fuel mixture with the YFZ. The spark advance map is where you can finetune the power delivery for various conditions, and that can be altered with that fourth clicker on the ECU. Position number one is the best-guess setting for spark advance, but it’s a more complicated subject than the fuel side of the equation. Changing settings on the ECU don’t just add or subtract spark advance; each is a completely different map, with more advance at some rpm and throttle openings, less at others. Some of the settings work better for mud with a more linear power deliver. Others are harder-hitting for sand or good traction. The only way you’ll find out what each does is to go testing. To make this easier, the Vortex comes with a handlebar switch that allows you to toggle between setting one and any other position that you preselect. If you want to experiment with a map of your own creation, there’s a setting that can be tuned when hooked up to a laptop.

The Suzuki LTR450 has a slightly different situation than the Yamaha. It was sold as an EPA/CARB-compliant vehicle, but Suzuki knew that racers would embrace it. So at the factory, the stock ECU was programmed with an alternative map for fuel and spark advance. This map was hidden, but could be accessed by plugging a resistor into the ignition, which was sold by Yoshimura and called the Cherry Bomb. That made government regulators very unhappy, but it made the Suzuki the easiest EFI machine to modify.

So for the Suzuki, is there any benefit presented by replacing the whole ignition? Absolutely. The LTR450’s hidden map was another best guess. Suzuki’s engineers anticipated only mild modifications—a pipe and maybe the removal of the stock airbox lid. The Vortex X10 goes beyond that, because its designers tested with more combinations of engine modifications, intake and exhaust. Our Suzuki was set up with a competition exhaust and a K&N filter within a less-restricted airbox; in other words, minimal modifications. But even at that level, the Vortex offered a performance gain. The fuel mixture settings were best at 5, 6 and 6 (low to high), and the advance was set to position 7. That gave the machine a universally likable range of power.

Like most EFI machines, the Suzuki is equipped with an air density sensor that is supposed to alter the fuel mixture for altitude and temperature. It does that fairly well, but if you ride often at high altitude or in extreme temperatures, you’ll need to be more precise. Again, the Vortex allows you to do your own testing and come up
with settings that are best for your conditions. The same thing applies if you run race fuel. Many blends are oxygenated and require a richer mixture. The people who programmed your ECU can’t possibly know what you poured into the tank, and there’s no sensor that can tell the motor how to compensate. You have to be able to make changes in the field. 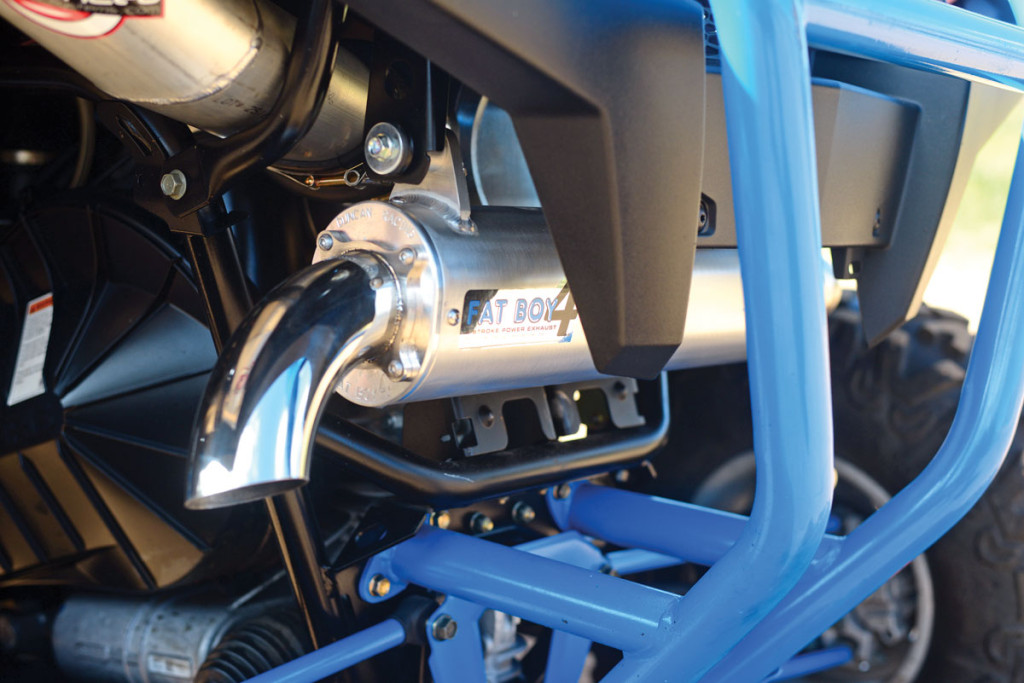 As for the RZR, it’s the most complicated application of all for Vortex. The stock Polaris ECU has more sensors than any ATV because of safeguards that are built in—things like brake line pressure and so forth. But under it all are the same basic principles. Intake and exhaust modifications have to work with ignition and fuel mixture changes. The RZR we tested was a Jagged X (the four-seat chassis without the rear seats), and it had a Duncan Fatboy exhaust and an Advanced airbox. Side-by-sides are further complicated because of the importance of tire, wheel and clutch modifications—all of which dramatically affect how the motor runs.

We’ve seen a number of RZRs with engine modifications that performed no better than stock. This wasn’t one of them. Again, the Vortex CPU allows you to make fine adjustments for fuel, temperature and altitude. And as with any emission-regulated vehicle, the engine is screaming for more fuel 99 percent of the time.


Because of the RZR’s added complexity, the X10 designed for it sells for more than the ATV version, at $799. The versions for the Suzuki LTR450 and the Yamaha YFZ450 both sell for $699. Considering the expertise that goes into the manufacturing and programming, we’re amazed the price is so cheap—little more than the cost of a muffler. For more information, contact Duncan Racing at www.duncanracing.com or (619) 258-6306.
Share FacebookTwitterReddItEmailWhatsAppPinterestGoogle+

STEP UP TO STAGE 5! Elka ProSpec Shocks with DragonFire