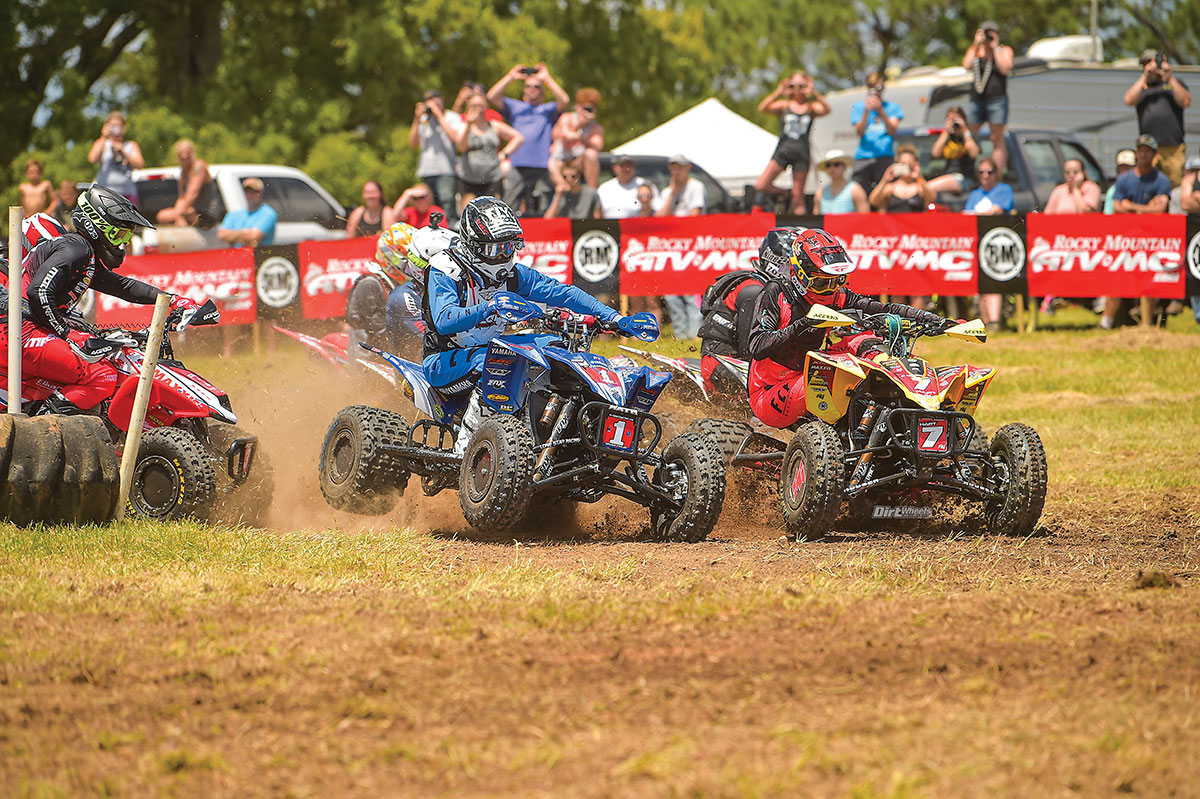 Like all racing series in the U.S., the AMA Grand National Cross-Country (GNCC) Series presented by Specialized was shocked to a standstill by the COVID-19 virus.

As states in the Southeast started to open up, the GNCC crew came up with plans to resume racing safely. Among the many safety restrictions, GNCC officials monitored details as small as requiring racers to bring their own pen to sign up.

Obviously, there are more, and the races are not advertised to limit spectators.

The first round after the shutdown was the Bulldog in Washington, Georgia, at Aonia Pass MX.

While many “normal” things had necessarily changed for the GNCC series, domination by WFR/GBC/Fly Racing/Yamaha’s Walker Fowler was not one of them. In dusty conditions, Fowler grabbed the start and sprinted to the win with a nearly two-minute lead.

It was his fourth straight win of the season. Action Off-Road/Tely Energy Racing/Kenda’s Cole Richardson had come from eighth place on the opening lap, and grabbed second after a last-lap battle with HHR/Maxxis/Fly Racing/Ithaca Recreation Sports’ Hunter Hart.

Taking the XC2 Pro-Am class win in Georgia was Action Off-Road/Maxxis/Blud Lubricants’ Austin Abney. Abney would start his day in second place, but he made his way into first on the last lap, earning his first XC2 win of the season. LanMills XC/WFR/Magna1 Lubricant’s Drew Landers earned the first three XC2 wins of the season, but at round four he took home second. Yamaha-backed rider Brandon Owens rounded out the XC2 Pro-Am-class top three.

Wolfe led every lap during the two-hour race. Earning second overall in the morning race and in 4×4 Pro was Bell Powersports/Nine2/Moose Racing’s Cody Collier.

Can-Am/BNR/Kenda/Tire Blocks/HMF’s Robbie Pecorari would come through third in the 4×4 Pro class and fourth overall on the day in Georgia.

In the WXC class, Action Off-Road/GBC/Moose Racing’s Katelyn Osburn grabbed the early lead and held it to the flag for her first win of the season.

Malaska Motorsports/HMF/Cecco Racing’s Hannah Hunter, who won the first three rounds of racing, found herself running third in the class behind Fly Racing/GBC Motorsports/Yamaha Racing’s Traci Pickens for the majority of the day.

Hunter put her head down as the white flag came out, pushing herself to second in the class and five seconds behind Osburn. Earning third in the WXC class was Ye Olde Cycle Barn/Maxxis/Yamaha’s, Alicia McCormick. Pickens was fourth.

Just one week later at the FMF Camp Coker Bullet round at Moree’s Sportsman’s Preserve in Society Hill, South Carolina, the weather and track conditions were different, but the pro winners were not.

The Georgia dust was replaced with wet, but the heat was still on hand. After a five-lap race in the South Carolina heat, Yamaha’s Walker Fowler greeted his 59th overall checkered flag with over a minute gap on CST/Houser Racing/Waynesburg Yamaha’s Brycen Neal.

McGill Mafia/Obor Tires/LSR/Moose Racing’s Adam McGill earned his first top-three finishing position of the season as he made his way through in third overall.

Holding onto fourth overall was JMR/GBC/Elka/Moose Racing’s, Jarrod McClure. Phoenix Honda Racing’s Chris Borich made his way up to a top-five finish after a mid-pack start.

In the XC2 Pro-Am class, it was LanMills XC/WFR/Magna1 Lubricants’ Drew Landers leading the way as the checkered flag waved. Landers finished eighth overall while earning his fourth win of the season in the XC2 class. Landers currently holds a 25-point lead over the rest of his competitors.

Can-Am/BNR Motorsports’ Robert Smith got a great jump off the line, earning them the $100 BNR Motorsports Holeshot Award and battling through to take second in the class.

Can-Am/Kenda/Lucas Oil/BNR’s Jordan Phillips made his way to third in the 4×4 Pro class after starting out in the fifth-place position.

Coming out on top in the WXC class, was Malaska Motorsports/HMF/Cecco Racing’s, Hannah Hunter.

Hunter battled her way through the pack of riders, making her way to second and then into the first. Action Offroad/GBC/Moose Racing’s Katelyn Osburn found herself second.

To check out a story on the 2019 GNCC John Penton race click the link below: