It has been months since you last fired up your pride and joy. Thick layers of dust coat the plastic, the gas in the tank might be sour and the chance of the battery even still holding a charge is weak. Oftentimes, we forget that a battery needs upkeep and a regular diet of electrons throughout its life cycle. On top of that, choosing the right type of battery can be tricky too. We went to Ballistic Performance Components to obtain their EVO3 Power System that includes a lithium iron phosphate battery, a battery health monitor and a charger for $229.95.

Almost all ATVs and UTVs come stock with a lead-acid battery, just like your car, truck or SUV. This type of battery is cheap and easy to manufacture since the chemical components aren’t rare and are docile to process. A lithium iron phosphate (LiFEPO4) battery requires more care and safety restrictions to manufacture, and the chemical components and metals are somewhat rare and valuable, which also equates to a higher purchase cost. That leads to efficiency, life span, size and risk.

Each cell of a LiFEPO4 battery has around double the voltage that a lead-acid battery cell does. It also charges and discharges far more evenly, whereas a lead-acid battery takes longer to charge and dissipates quicker while tapering down in power as it nears the end of its discharge. A lithium iron phosphate battery can have up to 10 times the lifespan of a lead-acid; however, they can be more vulnerable to cell damage if you don’t keep them charged and if you let them die completely.

That begs the question, is it better to spend more on a battery that lasts a lot longer, keeps a consistent discharge, charges quicker and can be more compact than its counterpart? Yes! We say go with the lithium iron phosphate battery as long as you are prepared to maintain it, and Ballistic Performance Components’ EVO3 Power System has everything you need.

Ballistic Performance Components comes with an EVO3 lithium iron phosphate battery that generally weighs less than your machine’s stock battery. The kit also comes with a health monitor that has a charge-level indicator light to show you how much power your battery has left. And last, an Optimate 1 charger comes in the kit. This is a smart charger that won’t overcharge the battery, and it should be utilized constantly to keep your battery at an optimum level.

Installing the battery on our Honda TRX450R was simple and quick. We routed the health monitor to the battery terminals under the seat. When storing the quad, we keep the charger connected to the health monitor, which acts as a batter tender. The system maintains a charge on the battery while your machine sits before your next ride. 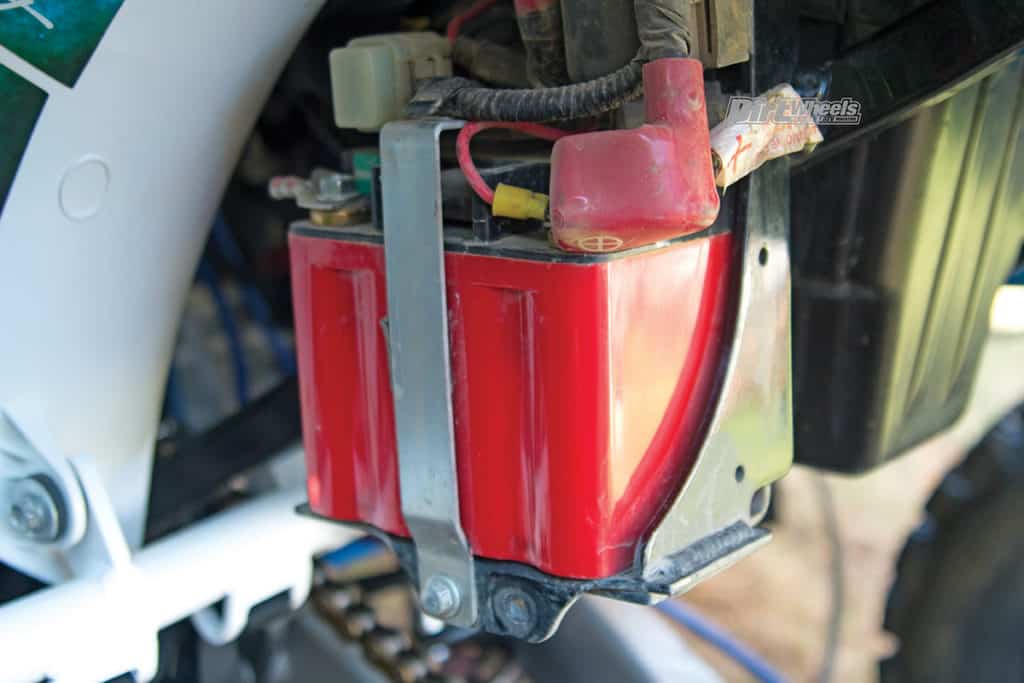 We have been running this battery for months in our Honda without issue. When we take it camping or to the races and don’t keep the battery plugged in for a few days, the battery barely loses its charge. The whole kit runs for $229.95, while a comparable lead-acid battery and tender system would run you under $150. But, in the long run, you will have to purchase multiple lead-acid batteries over the life span of one properly cared for lithium iron phosphate battery. Go to www.ballistic-batteries.com or call (920) 545-4956 to see what systems they have for your machine!

HOW TO MAKE YOUR QUAD RUN BETTER