How to have tons of fun going sideways

By the staff of Dirt Wheels with Josh Underwood, 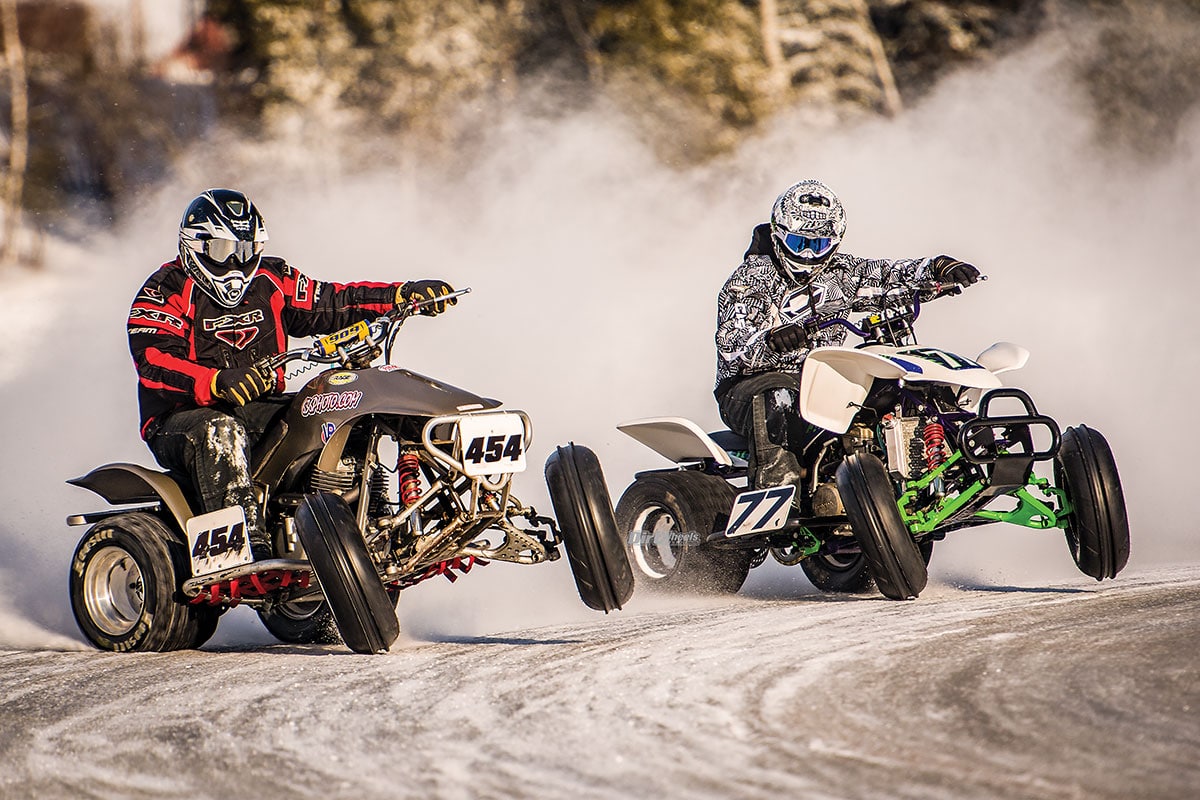 There is nothing Dirt Wheels loves more than a letter or an e-mail with a radical, high-quality photo included. Some relevant info is just a gilded frame on the shot. And then there are exceptional days like when we hear from photographer Stephen Tripp.

We heard from Stephen out of the blue after the 2018 Daytona SX quad race. He was wondering if we wanted to use any of his photos from the event. His shots were amazing, and we aren’t stupid, so we used them.

Then we took a peek at his website and saw some ice racing photos. We told him last spring that we’d like to see what he had to offer for a winter issue. Again, out of the blue, we get another e-mail: “Stephen Tripp from northern Michigan here.

Well, the leaves are changing, the temperature up here is dropping and we will be racing on the ice again before we know it. I put together some of my favorite ice racing photos from the past year for you to take a look at. They are from the Great Lakes Ice Racing Club, which races in the Upper Peninsula of Michigan, and the Central Wisconsin Ice Racing Club.”

WHAT DO YOU MEAN “NO SCREWS OR STUDS”?

The photos are amazing, and we were instantly curious about this form of racing. Ice fishing? Bah, humbug! Let’s get sideways! After looking at the photos, we had a number of burning questions: “Stephen, amazing work as usual. Can you tell me a little about the classes and other information about ice racing? Are all clubs basically running the same rules? Why no front brakes? Are there studded and bare tire classes? Does the setup change when there is snow on the ice? It doesn’t appear that horsepower is that critical.”

Stephen replied, “I’m glad that you liked the photos. I forwarded your e-mail to my nephew Josh Underwood. He was the club’s 2017 Non-Studded Open-class champion. I felt he could answer your questions better than I could.”

Take it away, Josh: “Every club has its own rule book unless they strictly use AMA rules, but that is rare. Some clubs break them down by machine specs and others by rider experience/talent. The class rules tend to overlap, though, and the desire to bring in traveling competitors usually allows for some leniency to non-club members.

“There are usually quite a few different classes of studded and non-studded quads. Many things come into play with suspension and tire setup. Things like temperature, ice density, amount of snow, the texture of the ice surface, and many more make or break your setup. To make things more difficult, the ice changes every lap.

“Horsepower is simultaneously your best friend and worst enemy in both studded and non-studded, although you aren’t going to have much luck with a stock motor outside of the stock classes. It’s like any form of racing—a balancing act. You can only put so much power to the tires before they lose traction. Finding that sweet spot is the key.”

Apparently, these are common classes. The classes for Non-Studded are 0 to 300cc Air-Cooled, 0 to 400cc Air-Cooled/250cc Liquid-Cooled Hybrids, and the Open class. Non-studded tires look like TT/dirt track tires, but the surface is radically cut to get many biting edges.

The Studded classes are Sportsman and Open. The Sportsman class is for less experienced riders.

We looked the photos over carefully, and what we saw looks like a great time. There seemed to be plenty of youth machines and many female racers. Some racers look super serious, while others are obviously motivated by the fun factor.

Check with shops in your area and do internet searches for ice races if you are interested in finding an ice racing venue near you.