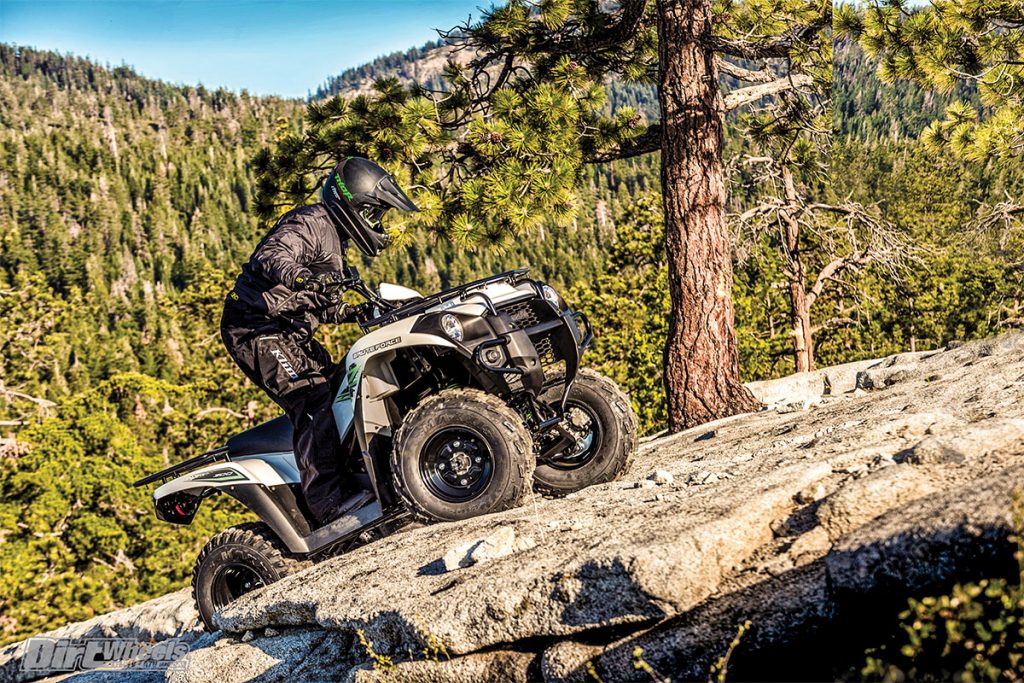 If there is one thing that Kawasaki knows how to do very well, it’s build impressive recreational and work-oriented UTVs. The Japanese manufacturer’s Mule lineup has every flavor of workhorse machine that you could want, the Teryx lineup provides sportier UTVs, while their Brute Force ATVs offer comfort, control and capability for fun and work. Kawasaki snuck in a new addition to the Mule Pro lineup called the Mule Pro-FXR that has new bodywork and a shorter wheelbase for enhanced recreational riding once the job is done at the farm.

Kawasaki’s Mule Pro line is designed with a hard worker in mind that likes to relieve the daily stresses out on the trails. The UTVs mount an 812cc, triple-cylinder, four-stroke engine in their frames that is electronically fuel-injected and paired to a CV-style transmission. Speed-sensitive electronic power steering, strong hydraulic disc brakes, LED headlights, independent suspension and engine braking come on this all-new Mule Pro-FXR just like the rest of the Mule Pros. However, the wheelbase has been shortened and the machine’s ground clearance increased, which gives it an edge over its older siblings in the recreational department.

The rear cargo bed can still hold 1000 pounds, and the FXR can tow up to 2000 pounds, so it is an impressive workhorse. Even though storage might seem modest, there is still a 13-gallon bin that comes standard with a water-resistant latching lid. If all of these features don’t excite you enough, Kawasaki offers a wide variety of add-ons for the Mule that your dealer can outfit the nimble machine with. You can pick up an FXR in Atomic Silver or Candy Persimmon Red, but the price of the machine is still to be determined.

Kawasaki has released multiple models in the Mule lineup for 2018. The Pro-DX, DXT, FX and FXT are all venturing from last year to this new model year. All of these machines come with a CV transmission, 4×4 capabilities and independent suspension on all four corners. They offer great benefits in the utility/recreational 800cc UTV class.

The Mule Pro-FX line is offered in three variations for 2018 with a gas-powered, 812cc, triple-cylinder four-stroke engine that is electronically fuel-injected. You can pick up the base model in Super Black for a starting price of $12,099. Take the next step to gain Kawasaki’s speed-sensitive electronic power steering on the Pro-FX at a price of $13,099. It is offered in Timberline Green and Vibrant Blue. Gain a second set of bright LED headlights, 12-inch six-spoke aluminum wheels and a composite sun top on the EPS Limited Edition for a starting price of $14,299 in a stunning Firecracker Red color scheme.

There are times where a machine that can hold more than one or two passengers simply isn’t enough. Kawasaki added another row of seats to the FX and calls it the FXT. The Mule Pro-FXT comes in five different options. The non-EPS base model starts at $13,099 and looks nice and stealthy in its Super Black color scheme. If you upgrade to the FXT EPS you get electronic power steering and the color options of Timberline Green and Vibrant Blue for a starting price of $14,899. The Pro-FXT EPS LE model starts at $16,199, comes in Super Black or Firecracker Red with the addition of aluminum wheels, a second set of LED headlights and a sun top to protect occupants from the hot sun or inclement weather. There is a Realtree Xtra Green Camo to pique the interest of hunters or camo lovers, and that version starts at $16,199. The last FXT in the line is the Ranch Edition that comes in a Metallic Titanium color scheme. The Ranch Edition starts at $16,999 and is outfitted with the standard equipment of the LE model but with a 3000-pound-rated winch, special badging and two-tone color-matched padded seats.

The Pro-DX and DXT line carry a diesel engine in their frame and offer multiple variations to choose from. The $14,099 DX EPS comes in Timberline Green with electronic power steering, and the DXT is offered in the same color for $15,099. If you want the base-model DXT without EPS, then the price point for the Super Black-colored UTV starts at $14,299. 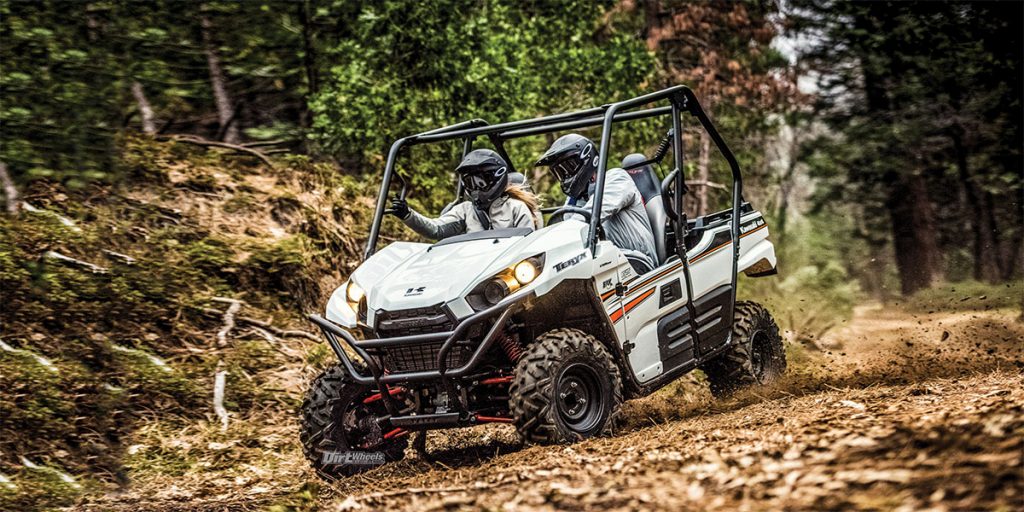 The Kawasaki Teryx has been around since the days of the Yamaha Rhino, where UTVs first clawed their way through ridicule and oppression to eventually become well received and highly enjoyed. The Teryx has gained many improvements and updates to become a durable, sporty and fun machine out on the trails, with a touch of utility capability. The fully independently suspended machines sport a 783cc V-twin engine that is paired to a CV-style transmission with a 4×4 drive system. The Teryx4 shares the same characteristics, but a second row of seats was designed into the machine.

The Teryx comes in three flavors for 2018, and all of them come with electronic power steering standard. The base model starts at $12,999 and comes in a Bright White color scheme. If you love camo or you like to hunt, you can get the Teryx in Realtree Xtra Green Camo for a starting price of $14,299. The Kawasaki Teryx LE comes with aluminum wheels, four LED headlights, a sun top at a price point of $14,999, and color options of Candy Plasma Blue and Matrix Camo Gray.

The Teryx4’s Bright White base model starts at $15,799, while the Realtree Xtra Green Camo version starts at $16,299. The Teryx4 Limited Edition model comes with the same options as the Teryx LE, except you can also purchase it in Candy Lime Green for a starting price of $16,999.

BRING ON THE BRUTE FORCE

Kawasakis are known for torque and ample power throughout most of their vehicle lines, and the Brute Force 750 promotes that point. The engine in this 4×4 beast is a 749cc, V-twin four-stroke that is electronically fuel-injected and paired to a CV-style transmission. The suspension is independent in the front and rear for a supple ride, and the fit and finish of the ATV are durable and attractive. There weren’t any major changes to the machine for 2018, but there are new color options. The base-model Brute Force 750i starts at $8999 without EPS in Timberline Green. The 750i 4×4 EPS comes in Vibrant Blue and Super Black for $9999. The other EPS-equipped models are the 750i 4×4 EPS in Metallic Stardust White, and Realtree Xtra Green Camo for $10,599.

Kawasaki has the newer riders covered with a rear-wheel-drive ATV with a manageable 271cc four-stroke engine that has a fully automatic CVT. Cargo racks come standard on this ATV, along with an engine braking system. You can get the Brute Force 300 for $4299 in color options of Super Black and Bright White.

Kawasaki offers great lineups of ATVs and UTVs, and we hope they eventually decide to delve into the super sport UTV market like Yamaha has done. Kawasaki has all other classes of machines covered in their lineup, and it’s only a matter of time before we see something new and exciting! This is only a spring release, so hopefully there is more to come for 2018. Go to www.dirtwheelsmag.com, www.kawasaki.com or your local Kawasaki dealer to find out more about their great machines.

Why the Future of ATVs May Be Electric