Polaris delivers its widest, most powerful RZRs ever By the staff of Dirt Wheels

When Polaris revealed what looked like the entire lineup of 2022 RZR machinery in late 2021, there were no RZR Turbo S models, nor any notice of a 72-inch replacement. It seemed unlikely that an aggressive company like Polaris would simply give sales of wide, high-horsepower machines to the competition. Never fear, a complete line of high-performance machines fill a new category Polaris calls the “Wide Open” lineup. Wide Open includes the all-new and radical RZR Pro R and RZR Turbo R. Both have a class-leading 74-inch track width and 20-plus inches of travel front and rear. Plus, the RZR Pro R has the most powerful engine ever put into a stock UTV—a naturally aspirated 2.0-liter (1,997cc!), four-cylinder engine producing 225 horsepower!

Massive chassis changes and suspension innovations provide what is claimed to be a new level of strength for a stock UTV chassis. The Turbo R is powered by the 181-horsepower engine found in the current RZR Pro XP, but carries it in a wider, longer-travel, more robust chassis similar to the RZR Pro R but with a shorter wheelbase. 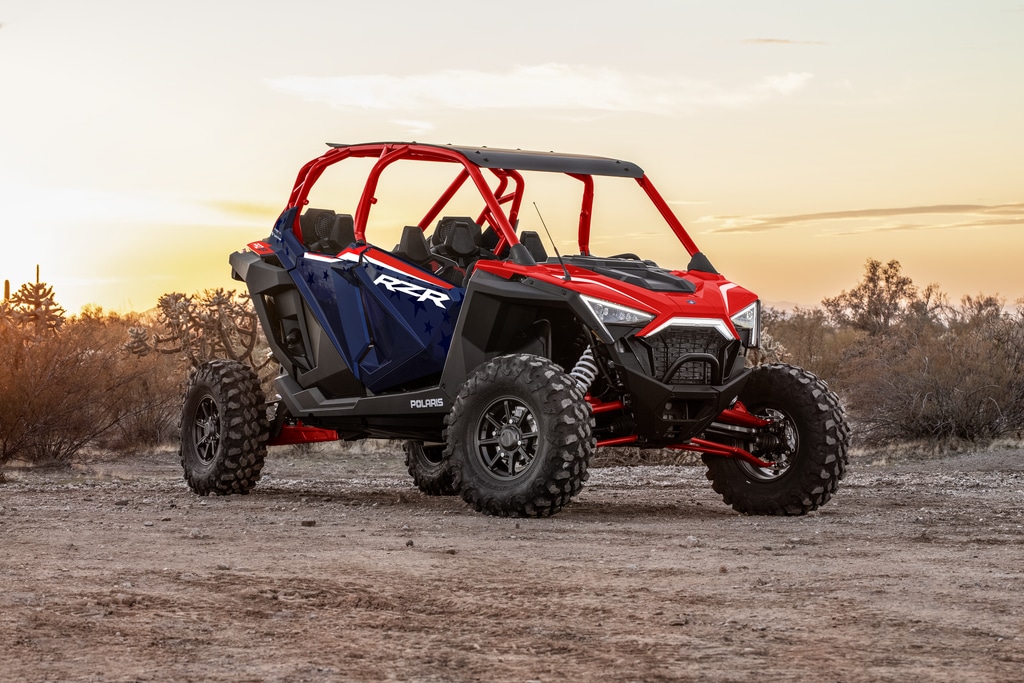 Designed completely from the ground up, RZR Pro R prices start at $31,999 and the RZR Pro R 4 starts at $35,999. The RZR Pro R and Pro R 4 will be available in Sport, Premium and Ultimate trims, and will begin arriving in dealerships early in 2022.

RZR Pro R’s naturally aspirated, 225-horsepower, ProStar Fury, 2.0-liter, four-cylinder engine is coupled with a larger clutch and belt. Dual Path Clutch Cooling breathes longer life into belts, and a new torque limiter helps protect the front drive from power surges during power-on landings or when bouncing the front on rock steps. The Pro R is claimed to deliver power to the ground with instant response for fast acceleration. Three user-selectable throttle control modes (Sport, Rock and Race) adjust throttle sensitivity and ensure the power is there when and how it’s needed.

For both the RZR Pro R and the RZR Turbo R, Polaris is using “usable travel” numbers of 27 inches in the front and 29 inches in the rear. That is measured from full-suspension droop to the skid plate. In that case, usable travel would include tire compression, frame flex and any chassis movement.

Actual suspension travel numbers are listed as well, and all Pro R and Turbo R machines have 22.25 inches of front-wheel travel. The RZR Turbo R has 22.4 inches of rear travel, and the Pro R has 24.5 inches of travel. Travel is the same for the two- and four-seat versions of each machine. We have printed those actual travel numbers rather than the larger usable travel numbers.

RZR Pro R’s front MaxLink 22.5-inch suspension is claimed to soak up whoops. Hold steady and minimize bump-steer with the patented thru-arm rear toe link to help manage the travel so you can maintain control even through the wildest terrain. For Ultimate models, all-new Dynamix DV is said to offer the industry’s first and only computerized independent compression and rebound suspension system, allowing users to get the full range of motion out of the shocks. It also includes four new suspension and steering modes that monitor inputs from driver and machine 200 times per second. Computers automatically adjust compression and rebound damping of the Fox 3.0 Live Valve X2 internal bypass shocks independently. That effort makes the ride as smooth as possible and keeps the wheels in contact with the ground.

On Premium and Ultimate models, the innovative Ride Command system keeps everything from suspension-mode monitoring and entertainment to GPS and route tracking right at your fingertips. Only Ultimate models get the Dynamix DV computerized smart suspension. Sport and Premium Pro R and Pro Turbo models get 2.5-inch Walker Evans Velocity needle shocks in the front and 3.0 Walkers in the rear.

Another first is the introduction of Pro Armor five-lug wheels, which can be paired with 32- or 33-inch tires, with 32-inch, 8-ply Maxxis Rampage Fury tires. Pro Armor will launch a full line of aftermarket accessories that fit the vehicles, including cages, roofs, windshields and storage. 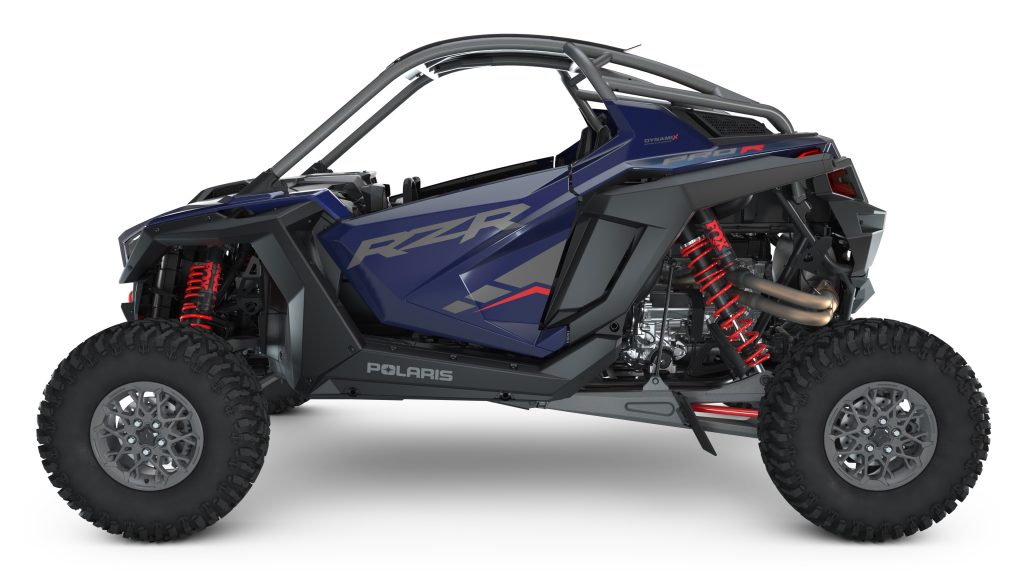 Four-wheel hydraulic discs with triple-bore front and dual-bore rear calipers, and automotive-type aluminum top-hat rotors give the driver definitive response at the pedal and bring the machine to a halt.

With all the features, it is no surprise that the Turbo R Ultimate weighs 2013 pounds, roughly the same as the stock Turbo S four-seater. The lower-optioned Sport model weighs 1943 pounds. With more features and that four-cylinder engine, the RZR Pro R Sport Premium weighs 2144 pounds. So, all the Ride Command parts and the other features add up to just over 150 pounds. 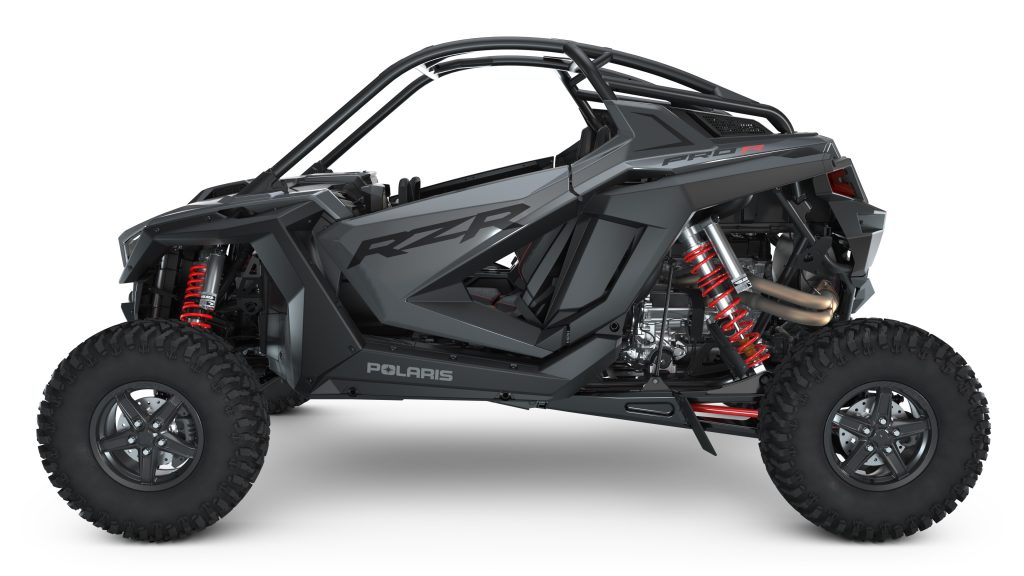 The suspension and track delivers the stability to tackle challenging terrain, while the one-piece chassis and fortified roll cage maintain the integrity of the machine and peace of mind for the rider.

We are happy to see the RZR Turbo R has a lower low gear that offers plenty of torque at low rpm and rolls on the power smoothly to capably crawl around demanding terrain. The 74-inch stance coupled with the MaxLink suspension system soaks up the bumps and holds the line. MaxLink connects the shocks to the low A-arm on the Turbo Rs as well.

Just as with the RZR Pro, the RZR Turbo R conquers terrain with four new Dynamix DV suspension and steering modes that monitor inputs from driver and machine hundreds of times every second and automatically adjusts compression and rebound damping independently.

Innovative technology like Ride Command and Rockford Fosgate audio is available depending on the model. Four-seat models have fold-flat rear seats for storage and bolstered bucket front seats with four-way adjustability and multi-point harnesses.

RZR Turbo R will be available in Sport, Premium and Ultimate trims, and will begin shipping spring 2022.