KRX e-suspension and wider, longer-travel Teryxs By the staff of Dirt Wheels 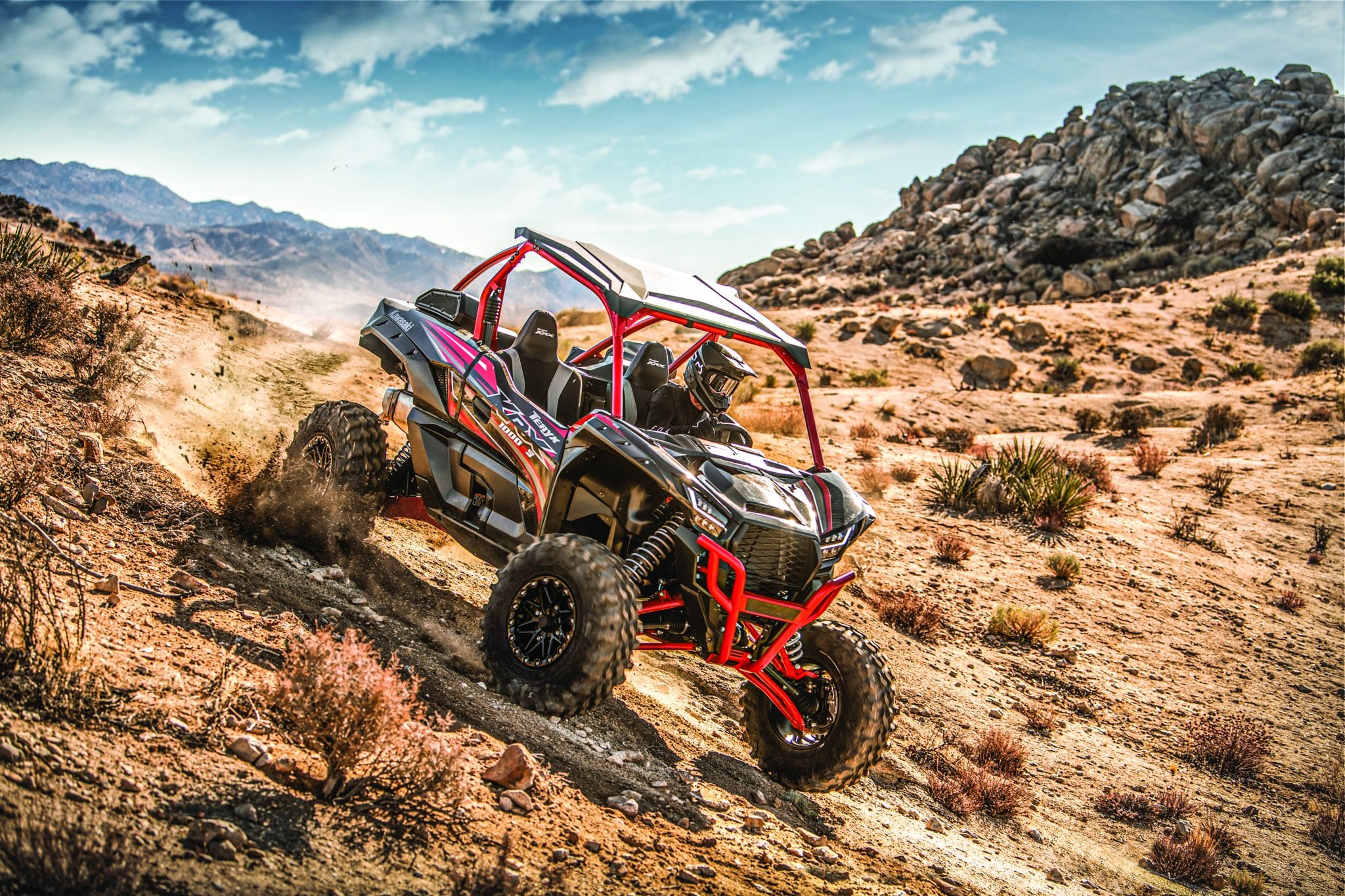 Kawasaki has already announced a full 2021 lineup without hinting that more updated UTV models were coming. We don’t mind the secrecy, since the “Green Machine” has been hiding welcome additions. The new and latest variation of Kawasaki’s Teryx KRX 1000 line is the Teryx KRX 1000 eS. We are happy to say that the principle feature of the KRX eS is Kawasaki Electronic Control Suspension (KECS) featuring Fox 2.5 Live Valve internal bypass shocks. With the KRX eS, Kawasaki is following in the footsteps of the Polaris Dynamix, the Honda Talon 1000R Fox Live Valve and the new-for-2021 Can-Am Maverick X3 X RS Turbo RR with Smart-Shox. In addition to the electronic suspension, the Teryx KRX 1000 eS features a 7-inch high-grade TFT color display screen for instrumentation, KQR (Kawasaki Quick Release) sport roof, front bumper, and model-specific colors and graphics.

We are already big fans of the KRX 1000 for a variety of reasons, including the excellent suspension and ride compliance. Our experience with the Polaris and Honda computer-controlled Fox Live Valve shocks, and to a somewhat lesser extent the Yamaha RMAX with in-car on-the-fly suspension adjustment, has been overwhelmingly positive. These suspension systems are impressive if only for sheer convenience. While they may not provide race-level performance, they provide a level of comfort and control across an enormous variety of terrain conditions that no amount of suspension tuning provides with a single shock setting. We have faith that adding the computerized KECS “smart” suspension system will elevate Kawasaki’s already high level of suspension performance.

Kawasaki’s KECS pairs high-performance Fox 2.5 Live Valve internal bypass shocks with a Bosch electronic control system. Part of the system includes Kawasaki’s first use of a six-axis IMU on a side-by-side. KRX dashboard switches allow drivers to select from three suspension modes: soft, normal and firm. Changes are made on the fly to suit different terrain and speeds.

The KECS system takes input from the Bosch electronic control system, the fuel-injection ECU and a steering-angle sensor. The semi-active damping-control ECU then adjusts to the ground surface in real time to provide the ideal damping. KECS takes into account factors such as speed, driver input, vehicle axis and terrain.

Kawasaki claims that the normal mode is used for the widest range of conditions, while firm is best for higher speeds. Soft is claimed to be for technical sections completed at lower speeds.

The Teryx KRX 1000 eS features Fox internal bypass damping. Damping is both speed-sensitive (normal for any modern shock) and position-sensitive. When operating in the “ride zone,” a system of bypass valves and bleed holes allows fluid to bypass the damping piston, freeing up the suspension for comfort. When the compressed suspension enters the “bump zone,” fluid is forced through the piston’s compression valves, developing the firm damping required to resist bottoming. During shock extension, when the suspension enters the “catch zone,” fluid is forced to move through the piston’s rebound valves, again developing firmness to prevent harsh top-out.

Fox’s Live Valve technology complements the inherent performance and comfort achieved by the Internal Bypass design, using a semi-active valve to instantly adapt to any terrain by adjusting compression damping in real time to maximize comfort, handling and minimize bottoming out. Damping character is set according to the suspension mode selected.

The sizable all-digital instrumentation screen positioned above the steering column offers at-a-glance information to the driver. The display features white backlighting and has three brightness levels. When linked to a smartphone via Bluetooth, call and message notifications are displayed on the LCD screen and the time of day is automatically adjusted. Additionally, the display allows the driver to monitor suspension and review vehicle information, such as engine temperature, while supporting accessory audio and vehicle-mounted cameras.

All of this suspension and computer tech incorporated into the Teryx KRX 1000 should only amplify the good features of the machine. It already has tough styling, great ground clearance, a stable stance and more. We appreciate the interior space and design as well. We look forward to trail time in this machine. Suggested retail price is $24,399.

Kawasaki’s Teryx and Teryx4 have been a solid part of the Kawasaki line for many years, but the machine is still attractive with a modern look. Our last Moab outing was in the Teryx4, and we can attest that it still gets the job done. The reliability is legendary, and the Teryx 4 gives you comfort for four in the cab with the same footprint as a two-seater so the machine is nimble and easy to transport. Banish any thought that the Teryx KRX will eclipse the original Teryx. A major update has created the Teryx S LE and Teryx S LE, but note that they are added to the line and are not replacements for the normal Teryx or Teryx4. The powerful Teryx 783cc V-twin engine is still more than capable. EPS comes standard, as does a towing capacity of 1300 pounds—a work capability that the Teryx KRX cannot match.

Like all Teryx models, the 2021 Teryx S LE and Teryx4 S LE are built “Kawasaki strong” in Nebraska and backed by a 36-month limited warranty. For 2021, new longer steel A-arms can be found at all four corners paired with new Fox 2.0 LSC piggyback shocks that offer more suspension travel than the Teryx while also contributing to a more comfortable ride. The high-performance shocks are single-chamber gas-charged for fade resistance. All four shocks feature piggyback reservoirs, enabling the shocks to run cooler and provide more stable damping performance. The front shocks have larger shock bodies matching the 2-inch-diameter shock bodies mounted in the rear. The longer shock stroke translates to increased wheel travel, with the front increasing to 10.7 inches of wheel travel and the rear increasing to 10.0 inches.

The longer A-arms feature a more pronounced curvature for more ground clearance. The Teryx S LE and Teryx4 S LE also feature revised suspension settings, offering a more comfortable ride. Both front and rear shocks are adjustable for compression damping, as well as preload. The front suspension is complemented by an anti-roll bar.

The stance has been increased by approximately 4 inches in the front and 2.4 inches in the rear, bringing the overall width to over 62 inches. The new longer 88.2-inch wheelbase means ground disturbances have less of an effect on the cabin, increasing ride comfort and contributing to better handling.

So, whether carving on trails through the woods or traveling through the open desert, the Teryx S LE and Teryx4 S LE side-by-sides have the goods to handle it.

The 2021 Teryx S LE is available in both a Candy Lime Green and Candy Persimmon Red colorway. The 2021 Teryx4 S LE is offered in three different color options. The Teryx4 S Camo can be found in Realtree Xtra Green Camo.

IT SHOULD BE A GOOD YEAR

Whether you are looking for the extreme trail conditions that the Teryx KRX line makes so easy, or the more relaxed pace and tight trails that the Teryx line is so good at, these new models should be welcome. A little more travel and a wider stance are just what we ordered for the Teryx. Our wish list for the KRX consists of two items: smart suspension and a turbo. Kawasaki has given up half of what we wished for. We can’t complain about that, and we are looking forward to all three new Kawasaki UTV models.