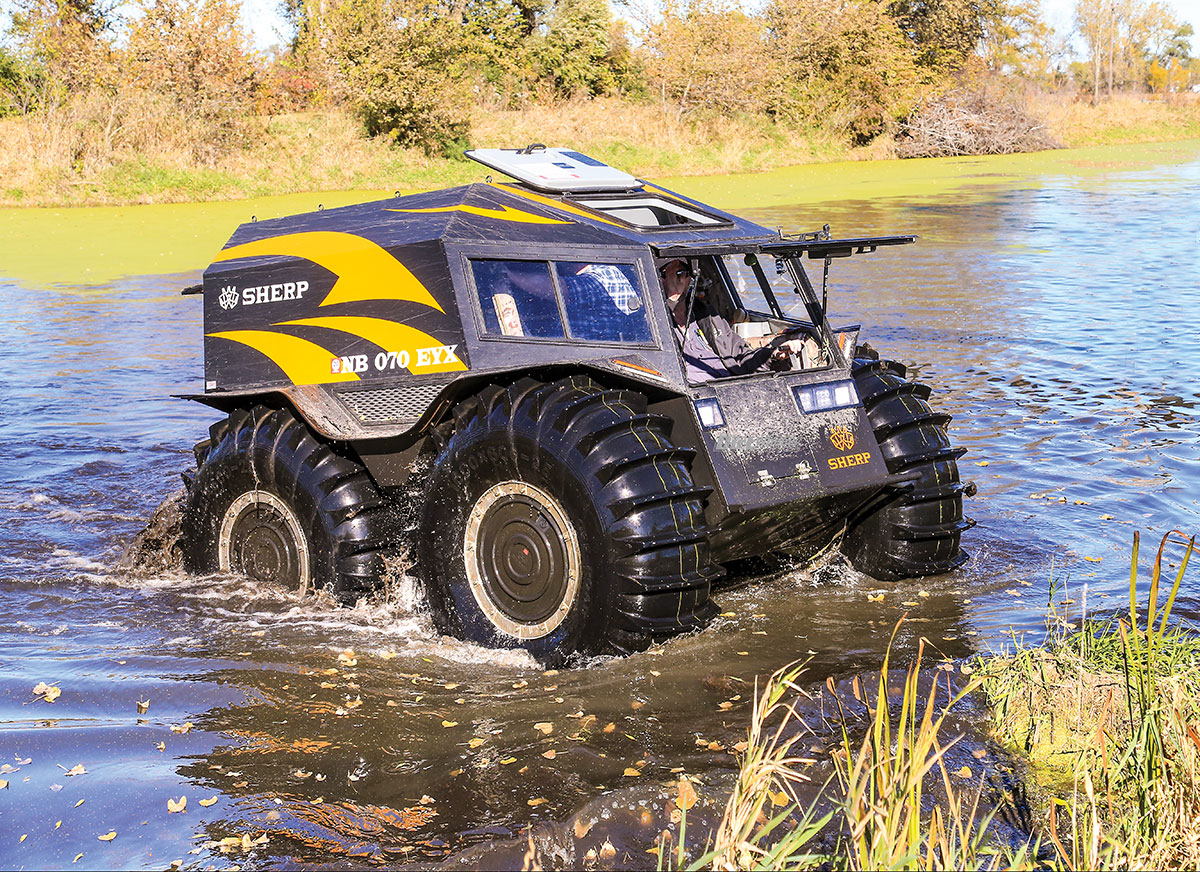 There are a lot of firsts going on here for us: first time in a Russian off-road machine, first time with 63-inch tires, and the first time we truly understood the concept of letting nothing stand in our way. The letters “ATV” have become a name or a model designation, but they are actually an acronym for “all-terrain vehicle.” If we are totally accurate, most all-terrain vehicles are really multi-terrain vehicles, and most ATVs actually perform better in some terrains than others.

Enter the Sherp ATV. Developed by Russian engineer entrepreneurs, the Sherp is built to thrive in the most daunting off-road situations on earth.

There are some important innovations here. For one—and a very important one—Sherp had proprietary extra-low-pressure tires made that measure an astonishing 63 inches tall and 23 inches wide on 25-inch rims. In addition to stunning traction on any surface, including bodies of open water, the tires provide substantial flotation properties, as well as all of the machine’s suspension. The tire pressures employed are so low that psi gauges are not effective. The onboard system that lowers or raises the tire pressure for varying conditions is controlled by a gauge calibrated in millimeters of mercury. Maximum tire pressure never reaches 2 psi!

Sherps use a full-frame, but you don’t see it. The watertight aluminum body is all-encompassing like a boat hull. Propulsion is produced by Japanese Kubota equipment, a four-cylinder diesel engine, and five-speed manual transmission. Performance is modest by quad or UTV standards, but the drive components should last for a millennium.

If you can afford the buy-in of $100,000 (to start), fuel consumption probably isn’t your first concern, but the Sherp is surprisingly thrifty. It burns as little as a gallon every two hours and never as much as a gallon an hour. The main tank holds nearly 18 gallons. Even math-challenged drivers can see that are over 20 hours of exploration fun on a tank. As the TV infomercials proclaim, “But, wait, there’s more!” What looks like wheel covers are actually fuel bladders—a total of 15 additional gallons in each wheel.

The claim is a fully fueled Sherp could drive from the Canadian border to the Gulf of Mexico and halfway back without refueling. Of course, it isn’t road-legal, so finding an off-road route the entire way is problematic. Also, with a maximum speed of 25 mph on land and 3.7 in water, you might get a little bored.

Obviously, transcontinental trips are not the Sherp’s forte. However, exploring, searching, working, hunting and camping are in their wheelhouse. The Sherp has a cab with two seats and seat belts, but the rear cargo area has crew benches. Space can be converted to four bunks, and the area is heated for use in, say, Siberia. The passenger compartment can be heated by the engine, the vehicle heater, or WEBASTO autonomous heater.

IT CAN GO ANYWHERE!

Sherp has promotional videos online that show off its capabilities. It traverses boulder fields, cambers, downed trees, and crawls over K-rails, in addition to the usual sand, mud, snow, and ice. Oh, and open water. The most astounding visuals show the Sherp driving over broken ice floes over water. The driver purposely drives until the Sherp (amazingly light for its size at 2,866 pounds) crashes through the ice into freezing water. You can order the Sherp with normal paddle-tread tires or with carbide studs on the edge of each tire rib. With the studded tires, the Sherp will crawl out of the water and back up onto the ice!

Since the Sherp is a skid-steer machine, it has a turning radius of under 9 feet! It isn’t made for speed in the rough, but it has a comfortable and fairly quiet ride. It is claimed to be impossible to get stuck, but if you get in a narrow ditch with high-enough sides, it probably would have to back out.

So, how did we get to experience a machine that is arguably as rare as a Bugatti Veyron in the U.S.? After a medical wake-up call, Nebraska’s Jim Monk decided he needed one. He was more than willing to take us out in it. He claimed that land managers don’t exactly know what to make of it yet, so he registered it as a boat and an OHV to avoid problems.

His property has ponds of open water and marsh that he used to consider waste, but now that he has a Sherp, he happily splashes around the place effortlessly, traversing between packed earth, grass, mud and open water without a hiccup. It does flatten bushes and grass, but as long as it doesn’t skid-steer on them, it doesn’t appear to tear anything up. It truly is an amazing, amphibious, go-anywhere vehicle. To see more or watch the videos, go to www.sherpatv.com, or search “Sherp ATV” on video sites.

Hourly fuel consumption (depending on off-road conditions) 0.52-0.79 gal. per hour