We have been anxiously waiting for our turn behind the wheel of the recently announced Teryx KRX 1000. Kawasaki produced a remarkable desert test course for the drive.

Thankfully, it wasn’t a fluffy, kiddy track, but one with fast smooth sections where we almost tick the governed top speed of 68 mph indicated. A variety of stunning steep and rocky climbs and descents were added to the real terrain. There were a number of tight, twisty areas, and some were in canyons that forced the KRX into narrow confines. 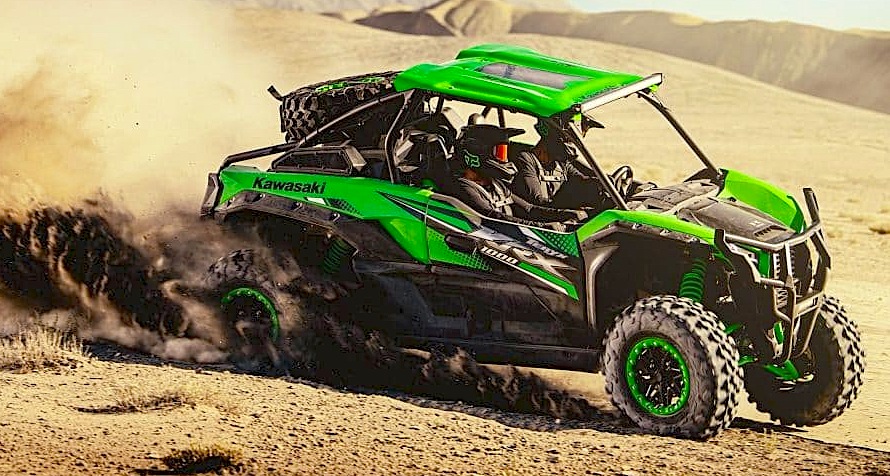 First impressions began as soon as we entered the KRX. Both the driver and the passenger seat have six inches of fore and aft adjustability, and the car is roomy for drivers over six feet tall. The seats are more upright than a Can-Am, so More like a Polaris or Honda Talon. The doors close with a satisfying clunk, and the inner surface is finished and comfortable where it contacts your body.

There is even an armrest on the door. The doors are tall, and even drivers over six feet tall feel contained. We know better than to rest and arm atop the door, but even tall riders would find that difficult due to the height and shape of the door top. 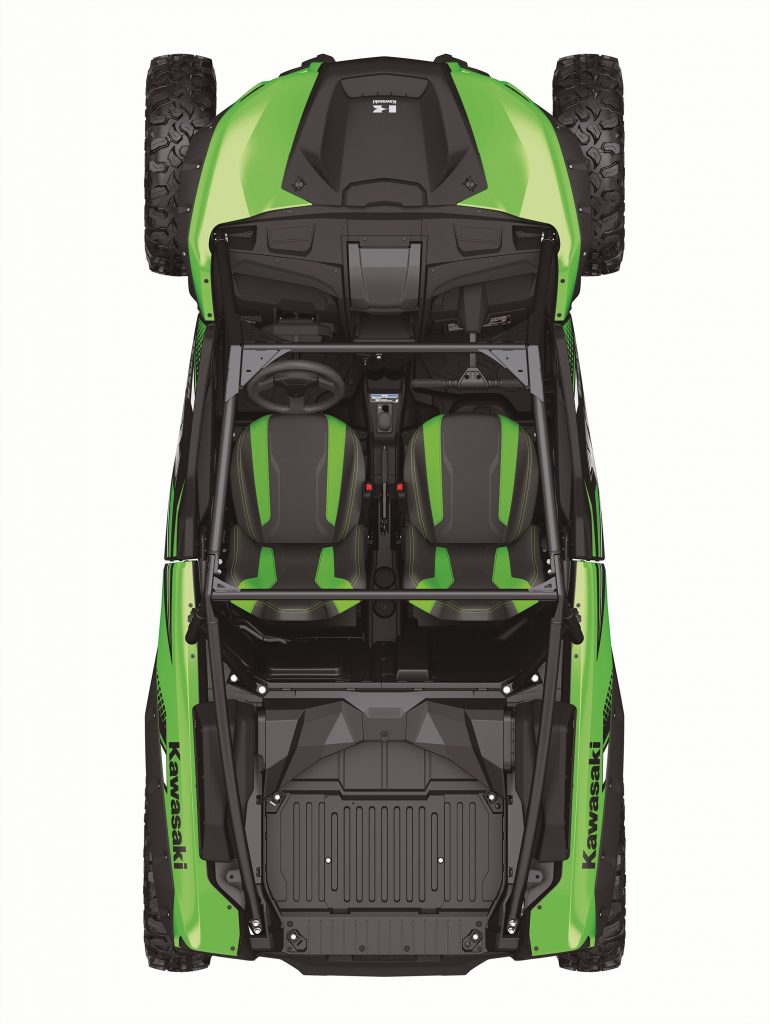 Entering the KRX you must pass a side protection bar like a Yamaha YXZ, though it isn’t as prominent as the Yamaha, and it is easy to enter and exit. The seats are firm but comfortable. There is a large display with all the information we have come to expect, but with a belt temp gauge built-in.

It is a bar graph display. Kawasaki claims that they never broke a single belt during testing! Our test was in extremely hot conditions with a lot of full-throttle running mixed with slow crawling. We never saw even one bar on the temp scale! 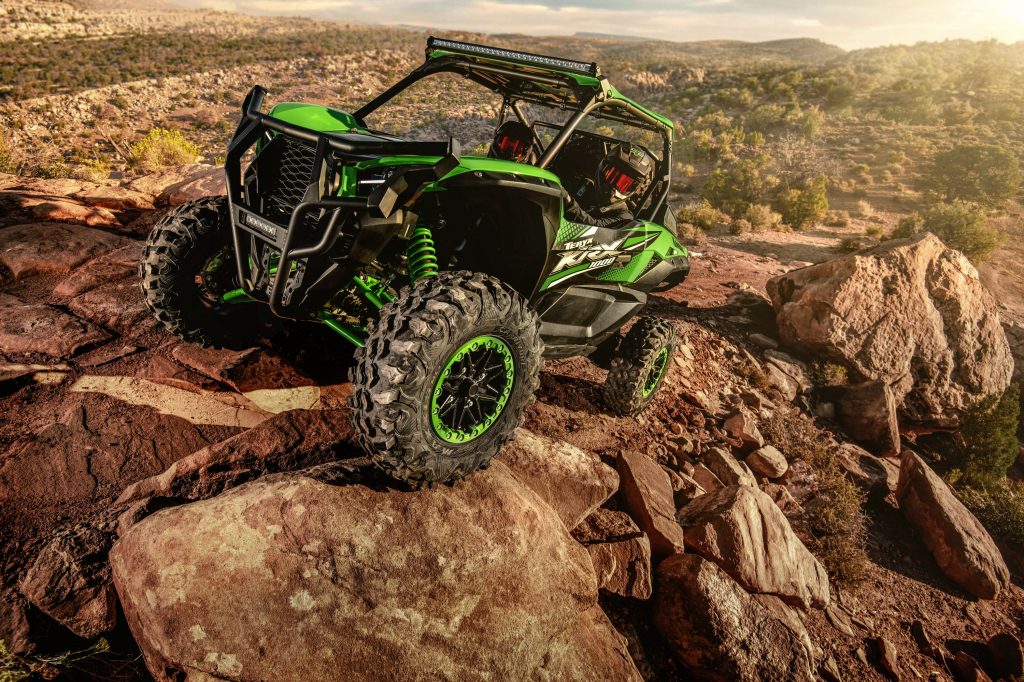 Two other controls are somewhat unique for a sport machine: a differential lock for the front and a low-power switch. We were happy for diff-lock, but who wants less power? It turned out that we do. Who would have thought… Shortly into the loop, there was a climb up boulder followed by a descent through a longer boulder section.

On the first lap, we stayed with normal power. Later in the loop, we climbed a super-steep boulder hill, and it was suggested that we select low range, diff-lock, and low power. The hill was so steep we thought sure that we’d want full power, but throttle control was greatly increased, and there was ample power for the steep climb.

The several boulder climbs were followed by steep boulder descents. We tried using the brakes but soon found that allowing the engine braking to do the job was smoother and better controlled. 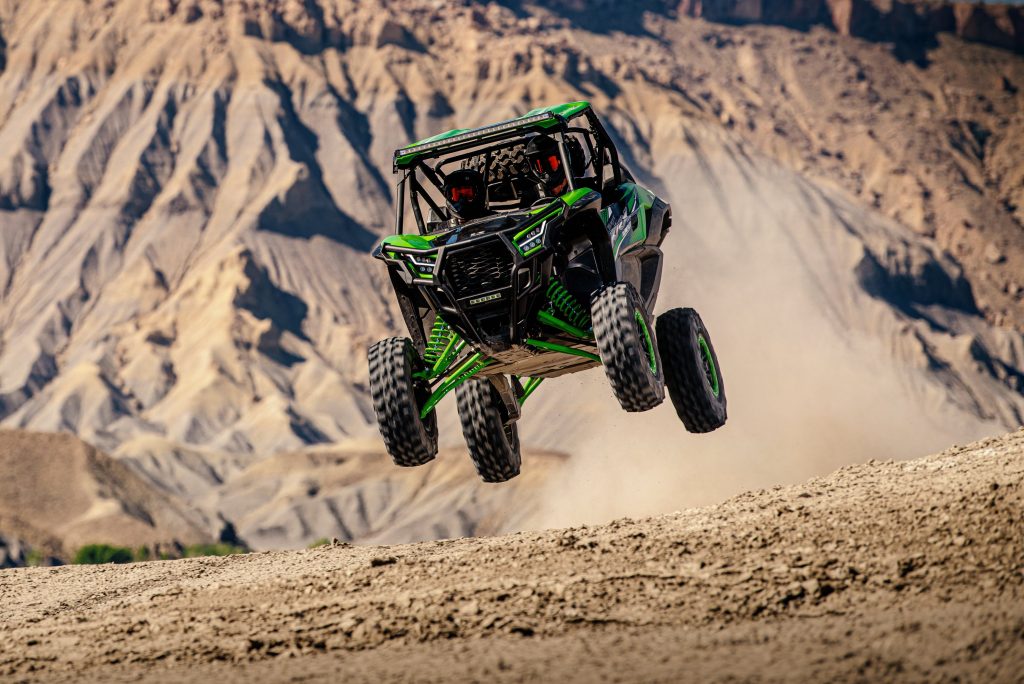 We aren’t used to sport UTVs without Park in the transmission, but Kawasaki feels that a parking brake is safer and ultimately will make for less stress on the transmission. The system works well, and the car shifts easily with a gated shifter. It is reasonably quiet inside the KRX, with a low exhaust note.

We got several hours in the KRX 1000, though most of that time was in quick spurts of speed between where cars were bunch up for the extreme technical sections. We can say that the suspension works well. The ride is smooth with little of the terrain making it inside the cab to punish the passengers. It handled whoops and sudden drops well.
Visibility out of the car on drops is a little tough with the high doors, but not bad. Even with hours in the car in the heat, it remained comfortable. Our ride experience was trail-oriented, and for trail driving and exploring, the Kawasaki will be amazing, and we forward to the chance to have less formulated driving experiences. 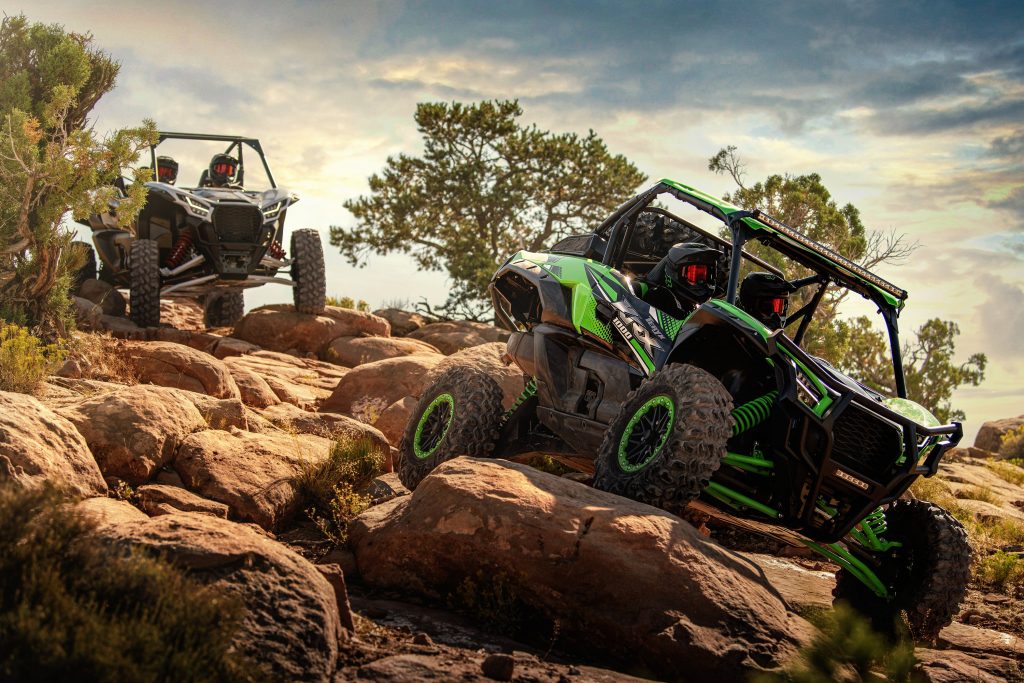 The turns on our course were tight and were soon deeply rutted, so it was difficult to accurately rate the turn. It doesn’t feel like you just flick it into a turn like a Can-Am X3 or a Yamaha YXZ, but it feels plenty nimble. The steering box does require more revolutions to turn than some machines.

Engine performance felt good, though we need a chance to have other normally aspirated machines along.  As we perused the KRX we were continually impressed with the size and strength of every part we saw. This is a robust machine.

That shows in the claimed curb weight of just under 1,900 pounds. A Polaris XP1000 is under 1450, and the Honda Talon is around 1,500 pounds. We have confidence that this will be a solid and reliable machine, and we can’t wait to get one of our own for further testing.

HOW TO INSTALL A STRONGER ROLL CAGE