The world’s first-ever snowbike race, the 2Moto Ground Zero, brought together a combination of famous motorcycle pros, a screaming crowd, and a number of trophy riders to show the world what snowbikes can do.  The event was hosted by 2Moto™ Snowbikes, (although it was open to any brand of motorcycle-based snowbike). 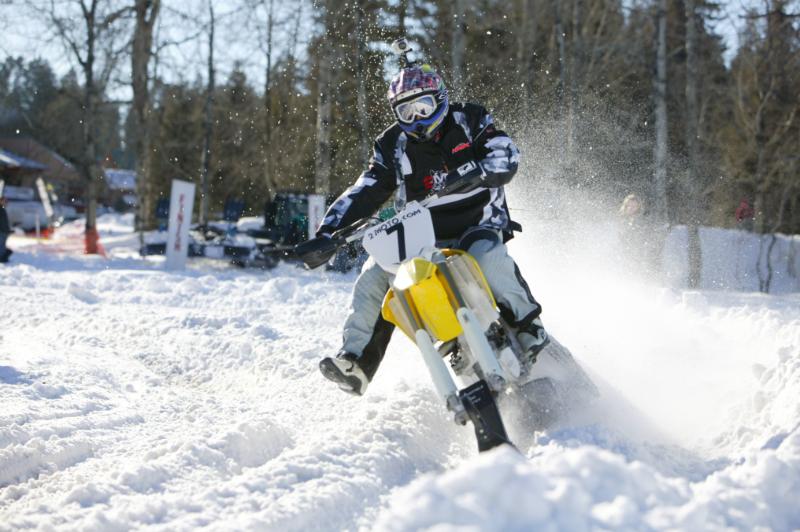 A number of famous motorcyclists, including John Dowd, Mike Metzger, Steve Hatch, Robie and Bret Peterson, Derek Mahoney, and Malcolm Smith’s son Alexander, agreed to give it a shot, despite the fact that none had ever ridden a snowbike before.

On race day, sunny weather greeted a crowd of over 1200 spectators and 18 trophy riders who showed up from as far away as Canada.  The ¾ mile Supercross style track, laid out on the McCall Public Golf Course, featured some rolling jumps and banked turns and during practice, Dowd and local rider, Richie Reynolds, just railed, from lap one, nearly dragging their handlebars in the bermed turns, and running lap times right at one minute.  . 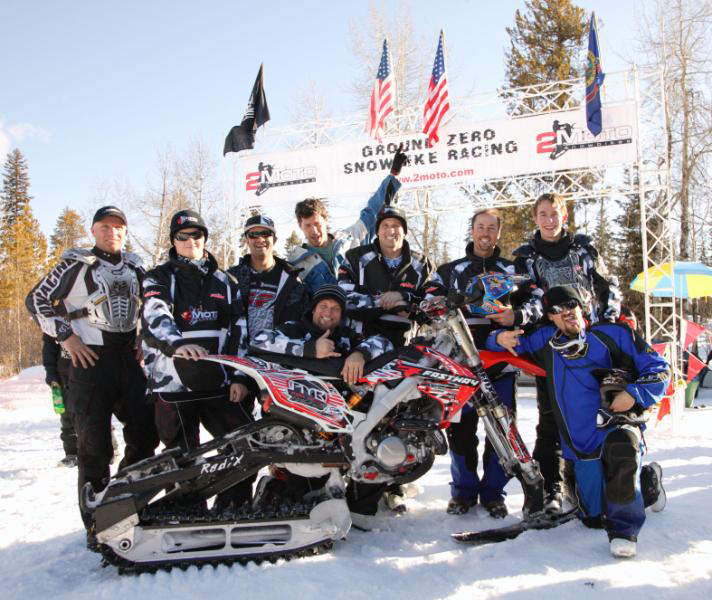 Saturday’s competition consisted of three classes: Pro Legends, Trophy A Main and Trophy B Main.  Former pro motocrosser Shane Donaca bought a 2Moto unit one day before the event, and drove over from Portland.  At age 41, he immediately showed fire, and he ran his Honda away with the B Main event win.  Local rider Reynolds also showed similar domination in the A Main, turning lap times in the 58-second range as he stormed to victory.  Behind the fastest of the fast, other Ground Zero stories were being written.  KickStart TV host Ron Duncombe fought his way through qualifying to make the A Main where he finished sixth, and Channel 2 weatherman Brian Carrington just missed making the B Main.

The event ended with the Pro Legends Main.  Based on their speed, both of the Trophy Main event riders, Donaca and Reynolds, were allowed to line up with the big boys in the Pro Legends Final, with Donaca storming to yet another holeshot.  Dowd is, however, still one of the fastest riders in the world, and he quickly dispatched Donaca and proceeded to check out, turning some record lap times and blowing the crowd away with his cornering speed.  Reynolds quickly moved up from a mid-pack start to take control of second, with Metzger, Donaca, Mahoney and Hatch staging a ten-lap war for third through sixth, often dicing just inches apart.  At event’s end, the pros took a well-deserved victory lap, waving and smiling at the screaming crowd, and then spending plenty of time signing autographs.

With no dust or flying debris and the extreme lean angles, many commented that the racing was some of the best that they’d ever seen, and although a few crashes looked impressive, injuries were zero.  Before the machines had even cooled off, talk was in the air of adding snowbiking to such famous events as the Winter X-Games and at venues such as Mammoth, and riders, including the pros, were asking when and where the next race would be held.  Clearly a new kind of motorcycle competition was born, and Dowd further established himself as one, amazingly versatile rider.

For more information on snowbiking and snowbike racing visit: www.2moto.com.

Ballance, Bithell will Race Horses on their ATVs in the GNCC Horses versus Horsepower Shootout this weekend