Honda’s TRX450R will remain exactly the same for 2008. Well, except for the color of the gas tank. Which is definitely not a bad thing; we’re just surprised, especially with a few new contenders making their way into the high performance sport class.
Despite multiple companies featuring things like electronic fuel injection, longer A-arms and axles as well a whole slew of aftermarket items, Honda’s TRX450 has still managed to win both major ATV MX championships this season. Why change, then? That is exactly what Honda has been saying. Read on. 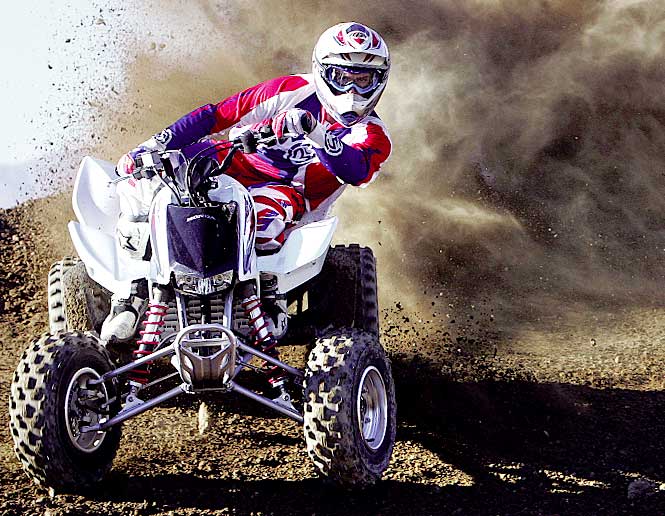 WHAT YOU GET
The heart of the TRX450R is a 450cc liquid-cooled SOHC, four-valve, four-stroke motor. Honda will again be the only ATV manufacturer offering two versions of its high performance sport quad. One comes with an electric starter and the other features the standard kick-starter. The electric starter is a simple push of the button, and it starts in gear.
You cannot add a kick-starter to the electric start version, at least not easily. The weight difference between the two machines is six pounds, which is about the weight of the electric starter, so no big deal there.

The engine draws air through a large airbox and a Keihin 40mm flat slide carburetor with a throttle position sensor. We know what you’re thinking; why doesn’t Honda equip their high performance ATV with fuel injection? Well, earlier this year they did so with their two-wheeled bike. So assuming the same thing is already in the works for their ATV’s, we should see it released on the 2009 TRX450R. However, knowing Honda, they will wait until Yamaha releases their YFZ450 with the EFI.

The TRX’s rev limiter hits up to 9850 rpm. This is one of the other reasons why a kick-starter cannot be added to the electric start version. The compression of the 12:1 piston is hardly noticeable on startup thanks to an automatic compression release built in.
Power wise, there is plenty on tap to even run a gear higher in the woods. Though very quiet, the stock muffler hardly feels restrictive at all. 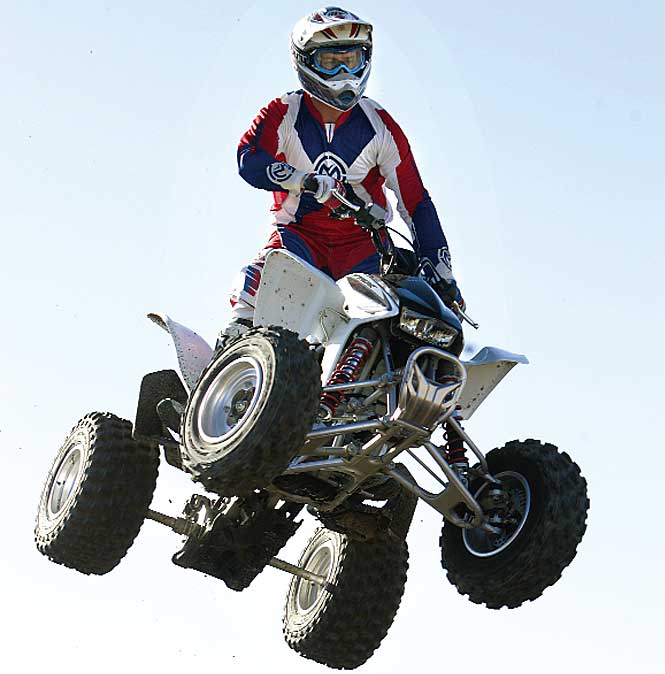 The machine feels light through the air, and flies straight as an arrow. These two qualities make it an excellent jumper.

The power is instant, and still arm-ripping strong! If you don’t hold on tight when you let it rip, it could possibly take off without you. It revs fast and pulls hard on the bottom, in the mid range and up top. Plus, just like most Hondas, the TRX450R is very easy to wheelie. This machine cleaned up in the racing scene this year. Joe Byrd won yet another title on the ATVA national tour, while John Natalie beat out a whole bunch of Suzuki’s in the WPSA series.

SUSPENSION AND MORE
Up front on the TRX450R is a double A-arm setup offering 8.4 inches of travel. The piggyback reservoir shocks are fully adjustable for compression, rebound and pre-load.
The rear end features the same linkage swingarm that beats the front setup with 9.3 inches of wheel travel.
Stock, the TRX450R is not the best- handling ATV in its class. We still have to muscle our TRX450R’s narrow chassis though the corners, and its tipping sensation will be there until you modify the TRX with longer arms and a wider axle.
Aggressive riders will love the suspension settings through high-speed sections with lots of G-outs. Slower riders will complain about the harsh ride at slower speeds. The TRX450 was definitely built to handle fast speeds.

SPECIAL FEATURES
The TRX450R will now be available with matching color fuel tanks. In years past Honda opted to go with a black style tank for all colors of the TRX. It will be available in red, white and black for 2008.
Honda again offers a power up kit this year. It includes a different cam,exhaust tip, head pipe, CDI sub harness (10,000 rpm rev limit) and jets. Honda claims with this mod, the motor puts out close to fifty horsepower.

BUY IT?
There are plenty of good reasons why Honda made few changes to the 2008 TRX450R. It is very versatile, and just like all Hondas it is extremely durable. You will have very little complaints with this machine in the motor department. The handling department will need some fine-tuning, but if you’re planning on racing it you will need an aftermarket front end. The trail guys might need to opt for one as well.
With two choices available in this machine, you have the option to select an electric start version for the woods and trails, or the kick start version for the racetrack. The electric start version will supply more than enough power for the trail rider, while the kick-start version may need to be amped up for the racer. A simple installment of Honda’s HRC kit should do the trick.
Maybe next year we will see a fuel injected version of the TRX450R. Maybe. Look for a high performance 450 Shootout later this year. The competition will be as stiff as ever with nearly every color of the rainbow competing. 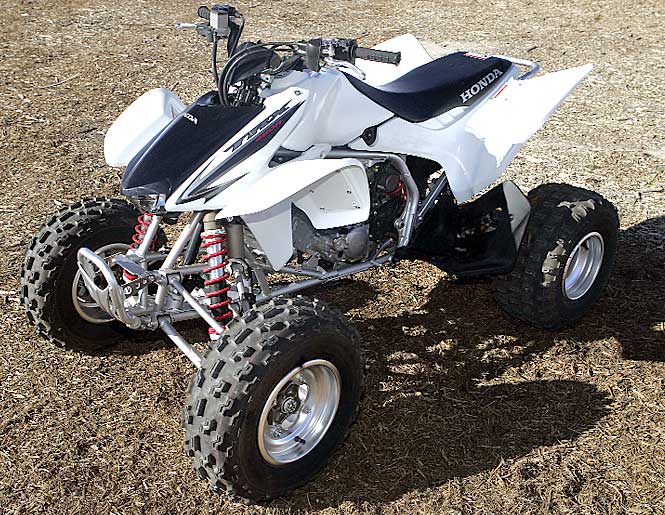