One of the best High Performance Two-Strokes Ever... 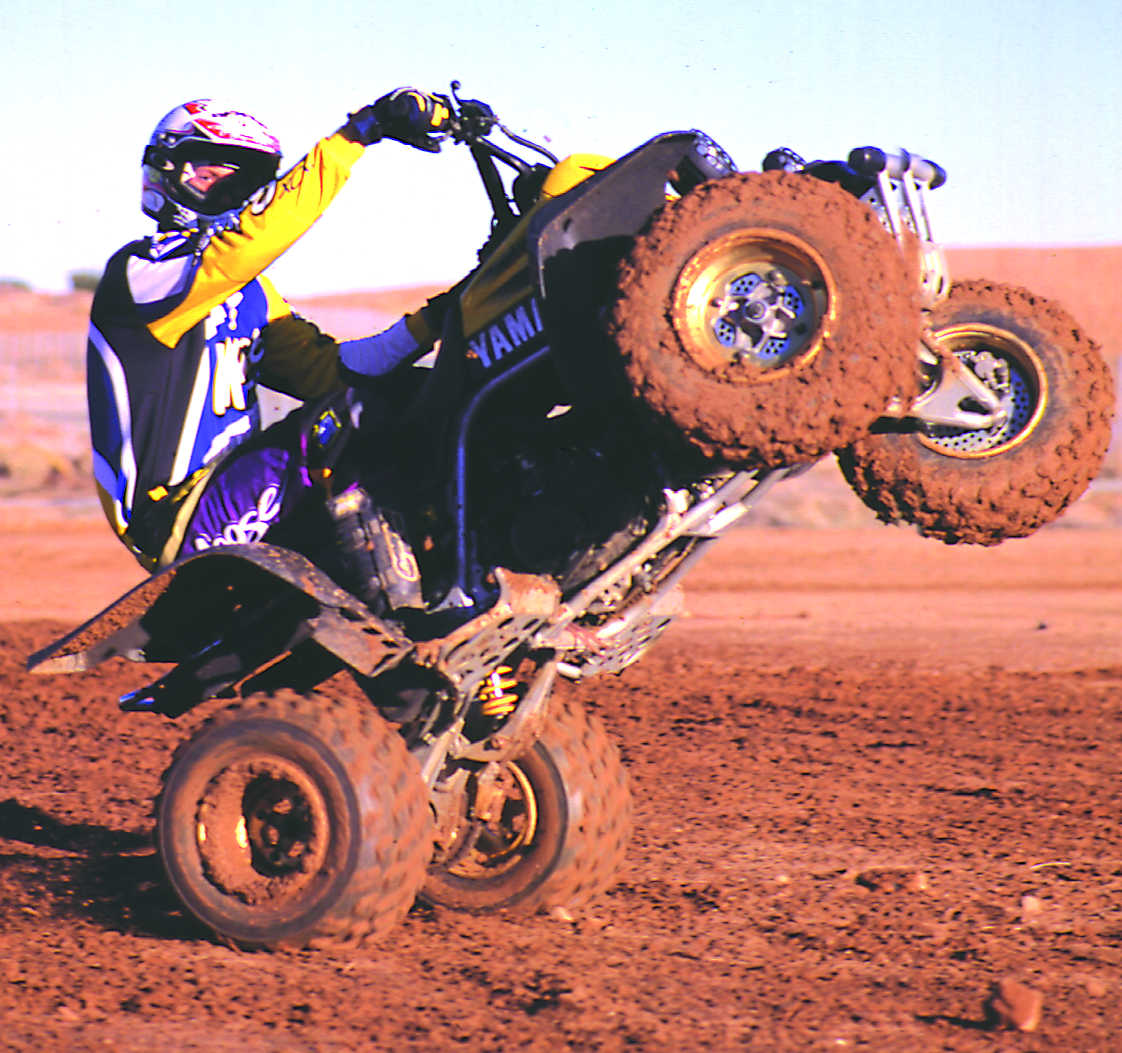 For the past ten years, Yamaha’s High-Performance Two-Stroke, liquid-cooled, twin-cylinder, Ban­shee has stood atop the throne of ATVing.

Since its introduction in ’87, it has been the ultimate roller-coaster ride among sport ATVs, and one of the best high-performance two-strokes ever made.

Few, if any, of its chal­lengers have had the staying pow­er and all-out performance that has marked the Banshee’s reign as the king of speed.

From the rat-a-tat-tat sound of the six-speed gearbox to the throaty howl of the twin exhaust pipes, the Ban­shee touches bases on so many sights, sound, and emotional levels that it is easily the most exciting production quad made today.

This is a machine designed to go fast and requires its operator to know what is involved in doing that. Be­gin­ners or inexperienced riders need not apply. It puts out a rapid-fire rush of pow­er that is concentrated in the mid to upper range of the powerband. Like a conductor at a symphony, you need to know when to mesh the different parts of the orchestra to get the best overall effect: rev, clutch, shift, rev, clutch, shift. Proper operation of a Ban­shee requires matching the en­gine’s sweet song to the gearbox’s rapidly shifting tune.

While there is no electric starter on the Banshee, the 347cc engine is de­cid­edly easy to kick over. You will need to use the carb-mounted choke to get the dual 26mm Mikuni carbs to fire up, as the Banshee takes some warm­ing up of its liquid-cooled en­gine before getting underway.

Once the machine has warmed up (about five minutes), you can snick in­to gear and get underway. The manual clutch is easy to use, as is the thumb throttle, which, in spite of pull­ing twin carbs, is not overly stiff. The six-speed gearbox ratios are closely spaced together for quick shifting and the engine purrs once you master the technique.

The engine power comes on from the middle of the powerband and revs out smoothly to a hyper-space top-end. There is no real bottom-end power, but the machine is not that hard to keep on the powerband. In all but the tightest, woods-riding situations, a good rider would have no trouble riding the Banshee.

It is easily the fastest production quad made today, with a top speed of nearly 65 mph wound out in sixth gear. That whoosh of power from the mid to the top-end is as addictive as the sweet and distinctive sound the Ban­shee makes as it winds its way through the powerband. You cannot mistake a Banshee coming up a road or trail.

There are many good reasons why Banshees are so popular in the dunes. The combination of high-rpm power, excellent sliding ability, good suspension, and predictable flight man­ners make the twin-cylinder howl­er a favorite in dunes all across America. Purchasing a set of sand pad­dle tires will transform your Ban­shee into an extremely capable sand slinger.

What gives the Banshee its unique flavor is how well it responds to high speeds and sliding. It is definitely one of the most fun-to-slide-and-ride quads ever made. If you don’t get a rush out of pitching a ma­chine like this slideways at speed, then somebody better check your vi­tal signs!

The chassis geometry is extremely user-friendly for riders wanting to hang it out in the corners. One ca­veat, though; the stock balloon-style Dun­lop tires, while a good all-around compromise, have a tendency to roll over whenever the throttle is shut down in a turn. What this means is that you need to be aware if you pitch it sideways through a corner and sud­denly get off the throttle, the ma­chine will stand up and pitch you over the bars.

Other than that slight, tire-related handling quirk, the Banshee is as smooth and predictable a quad as any we have ridden. The faster you ride it the better it works. It rails off of jumps predictably and gives the rid­er a feeling of confidence.

The single swingarm-mounted rear shock offers 8.7 inches of travel, while the dual independent front shocks offer 9.1 inches. The front shocks have five-way preload-ad­just­ments (which we ran in the middle [#3] setting).

A problem with one of the front shock’s binding occurred after we raced our ma­chine in Mexico. It bent a shaft due to the repeated pound­ing it received, and one wheel hung in the air off jumps (see photo). We re­placed it and had no further problems, but it ap­pears the front shock shafts are not up to full-race standards. 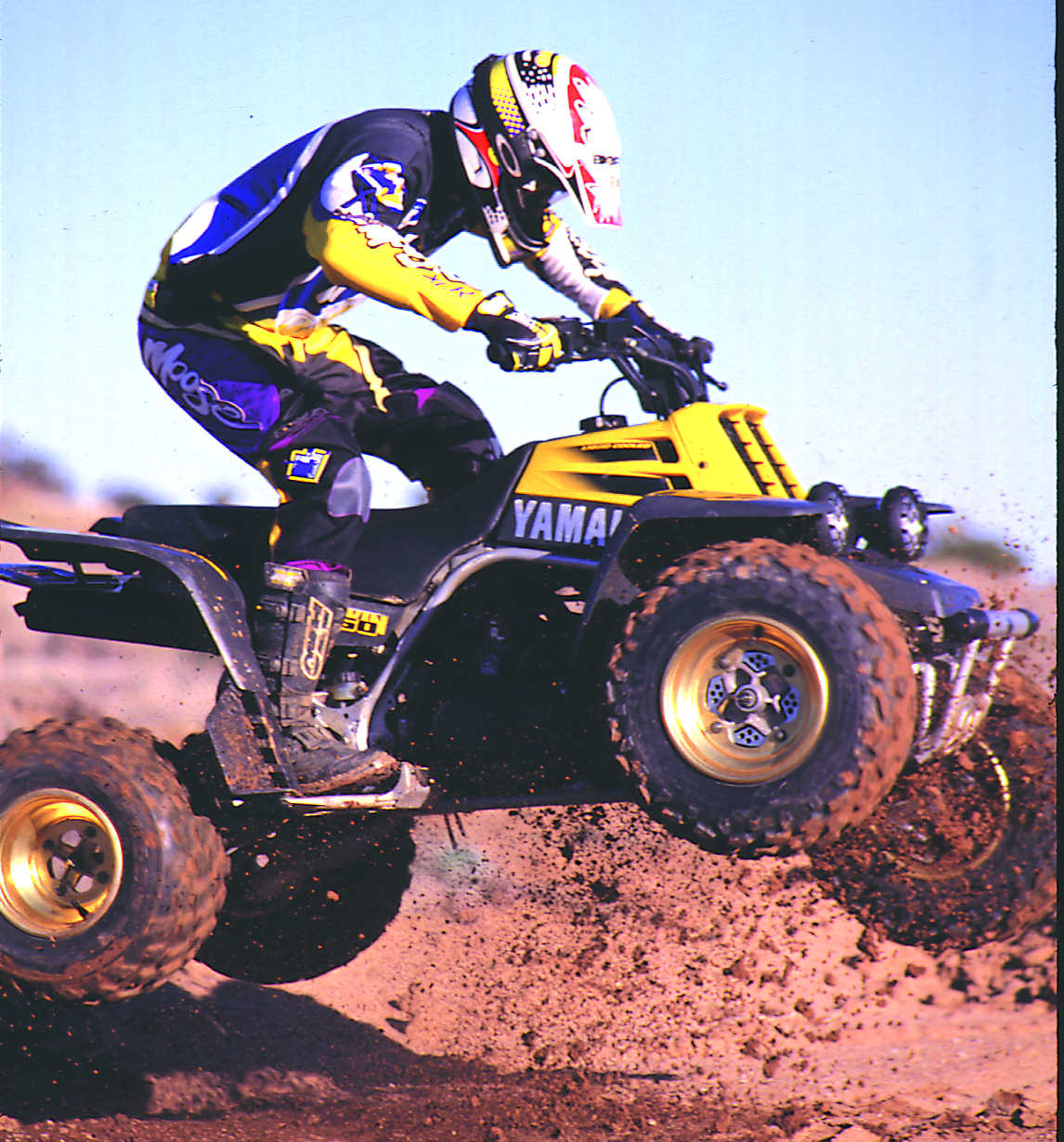 On the back end, the shock has preload, compression, and re­bound ad­just­ments. We ran these in the mid-set­tings as well (test riders’ weights ranged from 160 to 190 pounds). The rear shock did not bottom out or kick. Both the front and back ends soak up everything but the nastiest whoops without a problem. A typical whooped-out motocross track will tax the stock suspension, as the damping is somewhat slower than required for racing conditions like this, but overall we liked the predictable and plush ride the Banshee’s suspension system offered. However, we would like to see Yamaha pay more attention to qua­lity control on the front shocks.

PUTTING IT ALL TOGETHER

What makes the Banshee work is the sum of all its parts: the rapid-fire transmission, the snappy hit of the high-rev engine, the long-travel suspension, the predictable handling man­ners that make it so easy to sail off jumps, and its excellent sliding ability. Everything works together to make the Banshee the king of off-road performance quads.

Throw in excellent triple-disc brakes, good ergonomics (how the machine fits the rider), a good reliability record, and fairly easy maintenance; all these things combine to make this one of the best machines ev­er offered to the ATV riding public.

Sure, it has its own little faults, like a decided lack of bottom-end power, an easy-to-clog radiator, a spewing coolant overflow reservoir, and a te­di­ous chain adjustment system, but we are more than willing to forgive these faults for the unbridled enjoyment it pro­vides us.

This is a machine that truly delivers when it comes to high-end performance. Until Yamaha or someone else comes up with some­thing better, it will remain atop our list of the best performance quads made today.

HOW RACE-READY IS IT? CATAMAR CHALLENGE

To see how well our Banshee performed in the demanding world of competition, we let Dirt Wheels test rid­er Cain Smead take it to the final round of the La Playa Beach Race se­ries held in the Ca­ta­mar Dunes in Ba­ja California, Mexico.

We told Cain he had to ride the ma­chine in stock trim, but since the race is run on the beach, he begged us to let him put a set of Skat-Trak paddle tires on the back end. Paddle tires are le­gal at the La Playa race, so we re­lented and let him put a set on, as well as a mandatory kill switch—but no other modifications were allowed.

We wanted to see how well a stocker would fare against everyone else’s modified racers in the amateur class.

To our surprise, Cain returned with word that our production Banshee had indeed beat out all the modified Banshees and big-bore Honda TRXs it had faced in the race. After a third-place start, he stead­ily reeled in the leaders and took the lead to the finish line.

“The machine worked great down there,“ he said after the race. “They laughed at me when I pulled up to the line on a stocker, but they weren’t laughing at the end.”

“I did have a bit of a problem with the radiators getting clogged with sand roosts off the start, but the machine ran well and I was able to get by the rest of the field and take an easy win. At the finish, I was within sight of the pros who had taken off in front of us. This really is a ma­chine that you can literally take out of the crate and race.”

How good is the Banshee? Click the link below to find out.