If you go to an ATV dealership or even check out the manufacturers’ websites these days, it looks like high-performance sport quads are sort of fading away. While sales of brand-new quads may be rebounding at only half the speed of the economy, people are still riding them in large numbers. Look at your local ride area and racetrack; in some cases, things are as good as they ever have been. Everything from modern four-strokes to old two-stroke quads and even three-wheelers are out and about enjoying this great sport. Furthermore, businesses are still thriving, building more motors, maintaining current models and restoring older two-strokes. We recently had a couple of California-based companies—Duncan Racing and The Dirt Factory—bring out their showcase two-stroke machines for us to take a spin on in Glamis. 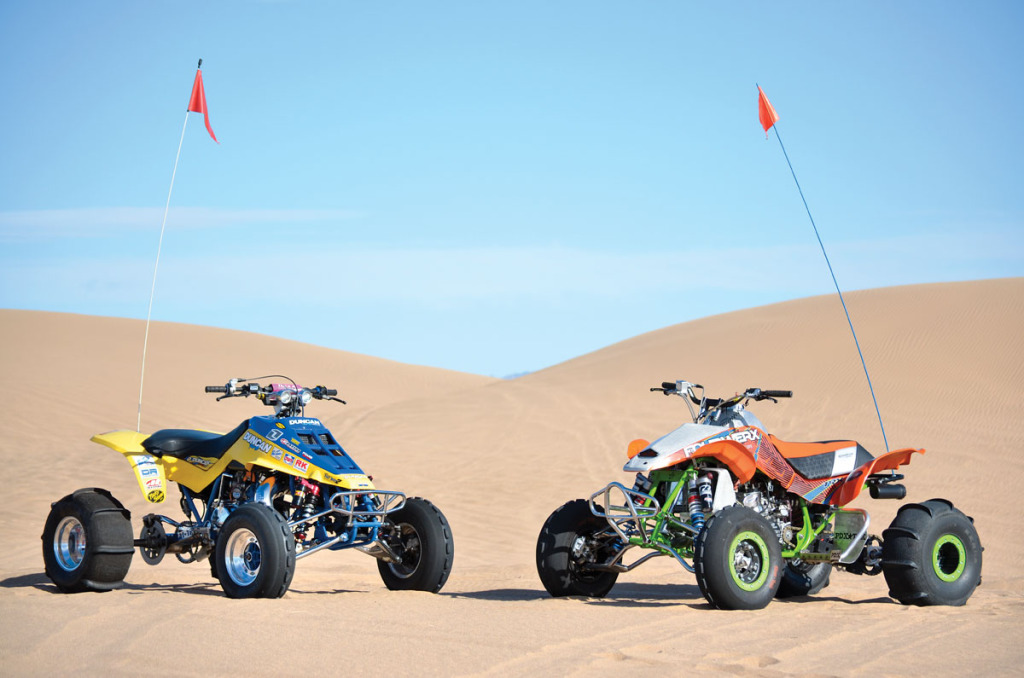 DUNCAN RACING
Duncan Racing has been in the ATV business since ATVs have been around. Sure, the company has evolved with the times and continues to develop components for modern ATVs. Two-strokes are by no means a small part of the sales. Duncan remains the go-to ATV engine performance shop in the San Diego area. It’s the closest shop to the world’s largest ATV sand box, Glamis.

Duncan’s immaculate Suzuki LT500 has been featured a handful of times in Dirt Wheels and is the perfect example of what kind of work they can do for clients all over the world. It features one of the National kits, which includes a Paul Turner pipe and one of the original Fat Boy 2 silencers. On the intake side is where Duncan’s expertise gets displayed even more. Decades ago they developed a clamp-on air-filter setup that was way better than stock. Some people like to keep these old machines original, but we and Duncan both feel you have to make some improvements to fix the flaws that the manufacturers made. Furthermore, Duncan includes in the kit the new Pyramid reed valve and a big 39mm Keihin carburetor.

With a rich racing heritage, Duncan has provided top riders all over the world solutions for more than just the motors. For this chassis, Duncan installed a Roll Design steering stem and a set of Fasst Co. Flexx bars. On the back end, a larger 2-inch-longer swingarm was outfitted. The stock Suzuki swingarm was notorious for breaking the chain adjustment bolts. The Laeger unit uses a Honda bearing carrier and a clamp system that will not fail.

QUADZILLA
When we compared this monster quad against an LT-R450 in the October 2011 issue, the two-stroke was faster just about everywhere. It has smooth, strong power that is not as pipey as smaller two-strokes. We noted how the chassis was so big, it didn’t really need to be widened. The Elka shocks were a huge improvement over stock, and the controls from Fasst Co. and Roll Design were welcomed as well.

It shows that Duncan Racing is still at the top of their game as far as two-strokes go. They tell us they do complete engine kits, porting and Paul Turner exhaust systems for all two-strokes, including the Honda 250R three- and four-wheelers, the Yamaha Banshee, Blaster and both Suzukis. Furthermore, Duncan can do crankshaft rebuilding, carb boring and flywheel mods. If you want some help getting your old two-stroke looking and running as good as the Quadzilla here, give Duncan Racing a call at (619) 258-6306 or visit www.duncanracing.com.

THE DIRT FACTORY
The Dirt Factory takes a more modern approach with the business by marketing on forums, purchasing through websites like Craigslist and selling on eBay. For The Dirt Factory’s owner Dale Quarton, the business is about paying the bills since his construction career started to fizzle in 2008 and has yet to rebound. Dale’s story is typical of the guy or girl who rides and loves sport quads anyway. If Dale buys a machine in running condition, he will probably ride it a few times before he tries to restore and sell it. In some cases, he will turn a purchase into his go-to machine for weekend trips to Glamis. That’s how we first got in touch with Dale after seeing his LRD aluminum-framed 250R a couple years ago.

If you are in the process of restoring an old 250R, LT250 or LT500, The Dirt Factory’s eBay store is a place to look for hard-to-find components. Dale does sell some modified parts, but for the most part, it’s stock components that he says sell well. Things like brake calipers, stock bodywork, ignition wiring and suspension components do really well. The Dirt Factory has fair prices on any “Buy It Now” sales, or you can join one of the 7- or 10-day auctions and try to get an even better deal. Most of Dale’s machines are purchased out west, so they have not been rusting away like in the Midwest or on the East Coast where most people are restoring machines these days. 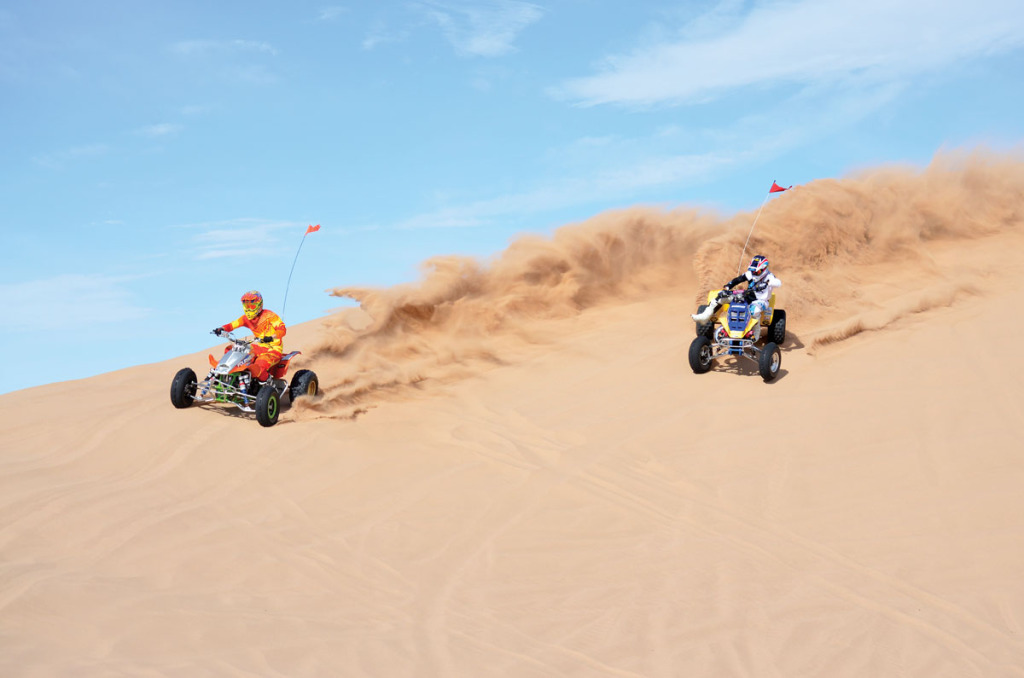 NEW MACHINE
Shortly after we featured The Dirt Factory 250R in the October 2013 issue of Dirt Wheels, Dale had a buyer for the aluminum LRD frame, so he sold it. Within weeks Dale discovered a cherry ‘88 250R with an Arens chassis. Parts and pieces were bolted back together, and his latest creation was ready. As it turns out, the BDT Motorsports 360cc machine was a solid competition for Duncan’s Suzuki Quadzilla 500. Both machines were equally matched in drag races on the flats and up Competition Hill.

The Arens frame actually handles much better than the aluminum unit that this machine was built around before. The 250R is much easier to slide around in the dunes and is noticeably lighter than the big Quadzilla 500. Furthermore, we like the larger PDX footpegs and heel guards Dale installed. No matter what, we always love riding old two-stroke machines, no matter how wild they are built or how close to stock they are. If you are searching for those stock, hard-to-find parts, look up The Dirt Factory on eBay or at www.facebook.com/thedirtfactory.

REBUILD AND RIDE
In addition to these two companies, the pages of Dirt Wheels have tons of advertisers still promoting two-stroke products. From reeds and reed cages from Moto Tassinari (www.mototassinari.com) to complete cylinder kits from guys like Vito’s and Trinity (877-FASTOYS), two-stroke service is still big business. Furthermore, in the “Showcase” section you will find scrapyards that specialize in used, hard-to-find parts. They all have products to help you keep that old dog alive. 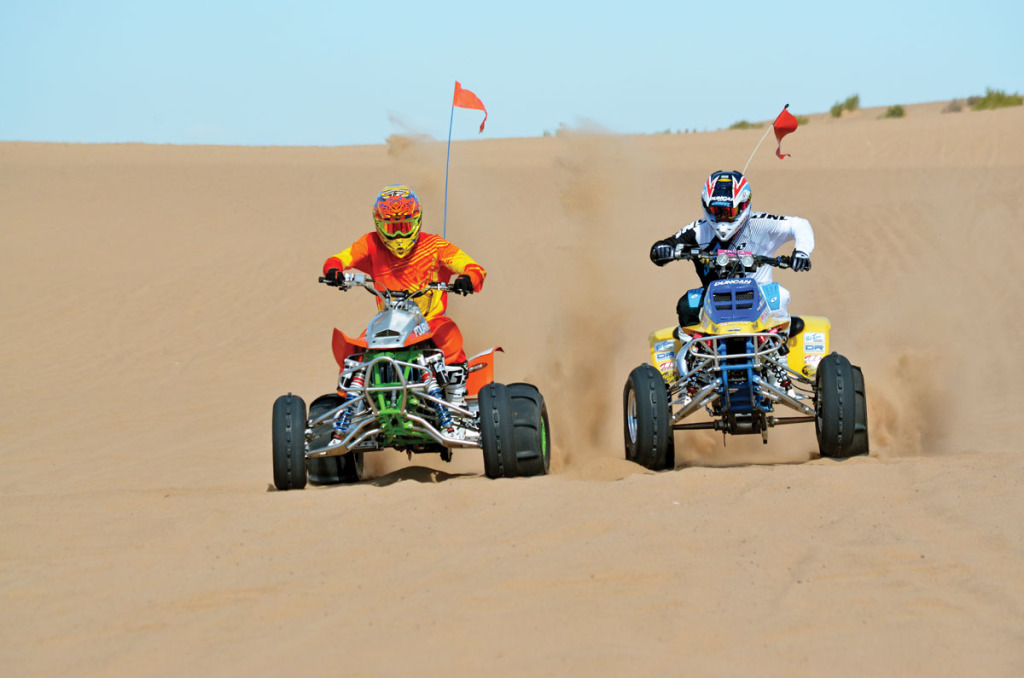 Want access to more great information like this on your mobile devices? Then check out our app on iTunes or Google Play and make sure to download our digital magazine! You can’t afford to miss out on all our exclusive product tests, guides, expert opinions, and industry news! You can download the issues on up to 4 different devices. Visit https://hi-torque.com/product/dirt-wheels-digital/ to register now!

You can also subscribe the the printed magazine and receive a new issue in your mail box monthly!

But WAIT! That’s not all! Readers can purchase our Dirt Wheels T-shirt for only $16! Talk about a great deal, and while your there, pick up a Dirt Wheels Hat too!