Horsepower isn’t something you buy—you have to earn it.

Anyone can throw money at a quad, and, occasionally, the results might be favorable. But, in most cases, those kinds of gains are modest compared to the results that are possible with a little effort and a lot of testing. In other words, buying your quad a silver ankle bracelet on Valentine’s Day isn’t as effective as writing it a love poem. Write that down.

The most common illustration of this comes with the installation of an aftermarket exhaust pipe. Common sense tells us that a stock quad is somewhat bottled up. The EPA and various state agencies require that even high-performance ATVs be very quiet and very clean. So, the inevitable search for power leads us first to the exhaust department. But, horsepower is much more elusive than that. The exhaust is just one piece in a larger puzzle that includes air, fuel and volumetric efficiency. If you install a 45-horsepower exhaust pipe on an engine that was tuned to make 30 horsepower, the result isn’t going to be that great. It’s possible that you might even lose power until you bring the rest of the motor up to the same level.

To illustrate our point, we put a 2012 Honda TRX450R on the Motoworks Dynojet Dynamometer for a day of horsepower testing. We chose the Honda because it still uses an old-fashioned carburetor with jets. This allowed us to change the fuel mixture without the confusion and mystery of EFI reprogrammers. The Honda is still a state-of-the-art performance quad, even if it is one of the last of the carbureted holdouts. But it should be noted that all of our results would still be valid for fuel-injected quads, only the methodology would be different. Instead of installing different jets, we would be altering air-fuel ratios on a device such as the Motoworks FMI. 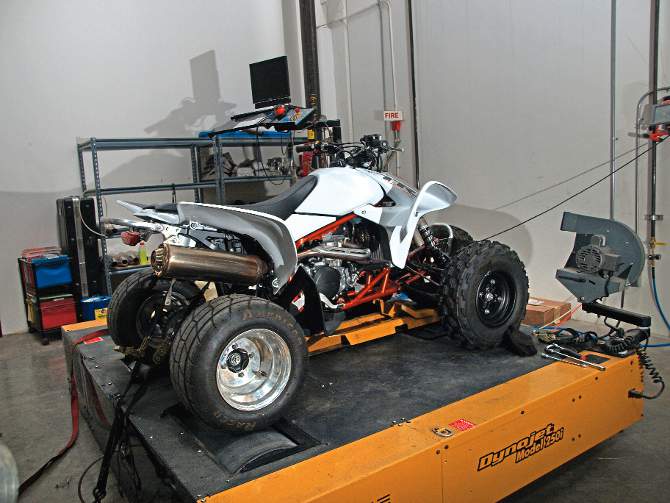 We used the testing lab at Motoworks to conduct our Honda experiments.

RUN NUMBER ONE: ALL STOCK

To get a good baseline, we ran the Honda in perfectly stock form. First, there are a few things you should know about horsepower and dynos. When a quad is tested on a typical dyno, it is tested with the throttle wide open. When you ride a quad, the throttle is almost never wide open. Studies have shown that even top pro riders have the throttle maxed out less than 5 percent of the time. The dyno only tests the main jet of a carbureted motor, whereas the rider experiences the slow jet, the needle and all the other circuits that affect performance. The only reason we test the motor with the throttle wide open is for the sake of simplicity, but you need to understand it’s only part of the picture.

In the case of the stock Honda, the dyno showed a peak horsepower figure of 36.01 horsepower occurring at 7550 rpm. Due to an electronic rev limiter, the engine would not rev past 9800 rpm no matter how many poems we wrote. But it didn’t matter, because all the power had been delivered by then. 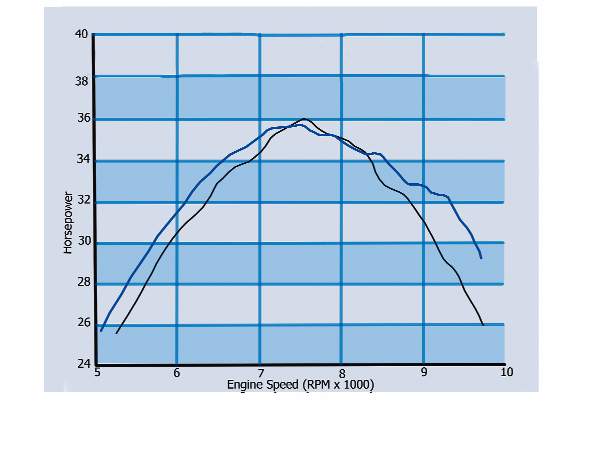 When you install a pipe with no other modifications, you’re leaving free horsepower on the table.

Our first step was to do the knee-jerk reaction. We installed a slip-on pipe. We used a Motoworks SR4 exhaust, which is basically the same canister and mid-pipe used by National MX champion John Natalie, as well as most of the riders he beat last year. It’s as good as anything on the market. How much peak power did we gain? None. In fact, the peak number declined to 35.57. To the credit of this particular system, power was gained everywhere else. Check out the difference at 9500 rpm; the stocker made 28 horsepower while the Motoworks slip-on made 31. This is a nice perk, but it didn’t have to happen that way. Many other pipes would have a negative result across the chart—that’s because we were letting the motor exhale and not inhale. 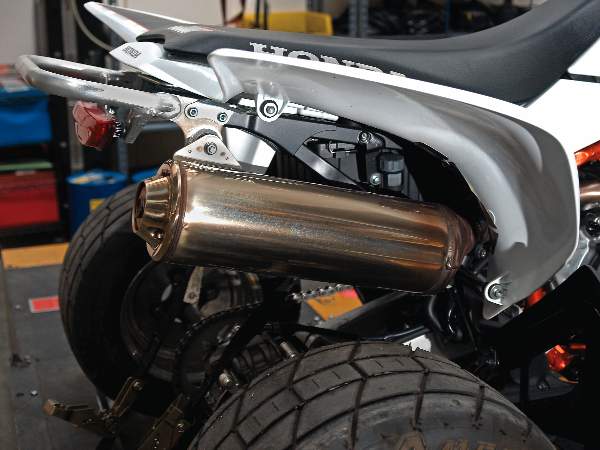 The Honda has a lid that restricts airbox noise. Removing it allows the pipe to do what it was designed to do. 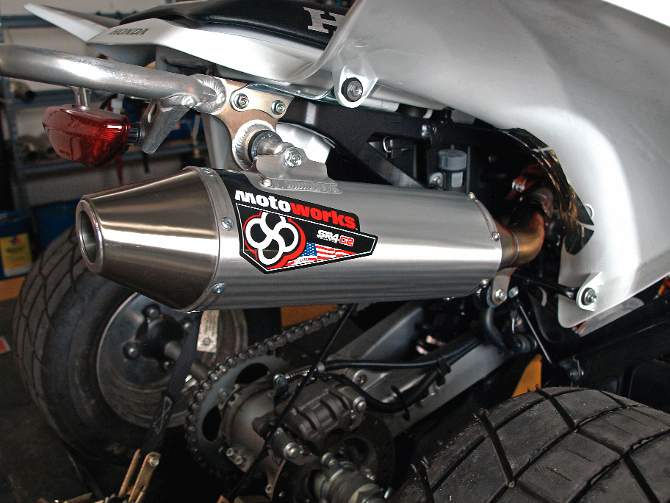 The muffler that comes with the TRX is incredibly quiet. If you race or ride on private land where noise isn’t a critical issue, an aftermarket pipe is the first place to go for more power.

The easiest way to let the Honda breathe is to remove the airbox lid. On most ATVs and dirt bikes, only part of the total noise is produced by the exhaust pipe. In order to pass a ride-by sound test, intake noise must be squelched as well, so Honda (and other makers) has designed a very restrictive airbox. It’s matched to the stock exhaust, so once that balance is disturbed, the motor is no longer tuned perfectly.

Once the TRX450R motor could suck air in as quickly as the exhaust could expel it, more gains from the pipe were realized. Peak power went up to 36.82, and the gains on the way up to that peak were even more dramatic. That point at 9500 rpm climbed up to 32 horsepower. 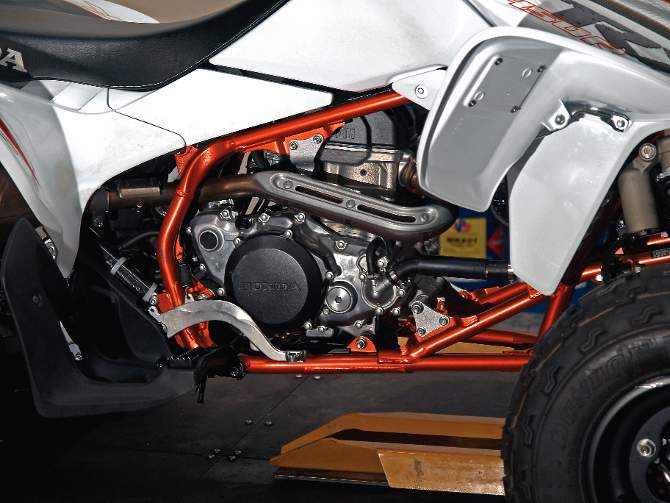 Honda’s four-valve. SOHC motor is capable of incredible power, but you have to unlock it carefully.

In our search for more power, we could have gone in many different directions from here. The most lucrative change, we decided, would be to change the head pipe. It was the most obvious, remaining restriction in the intake/exhaust equation. The stock exhaust was designed as a single unit. The most restrictive part might well have been the tail section, and that makes economical sense, especially considering that the Motoworks slip-on sells for $209.95. But a full system eliminates the next weakest link as well and still sells for under $400.

With no other changes, the peak horsepower skyrocketed at this point. The max went up to 38.05. What really went crazy was the over-rev. We gained almost three more horsepower at that 9500 rpm reference point. Something worth noticing here is that the motor is showing signs that it wants to rev farther. It’s still making power at 9800 when the electronic rev limiter kills the fun. 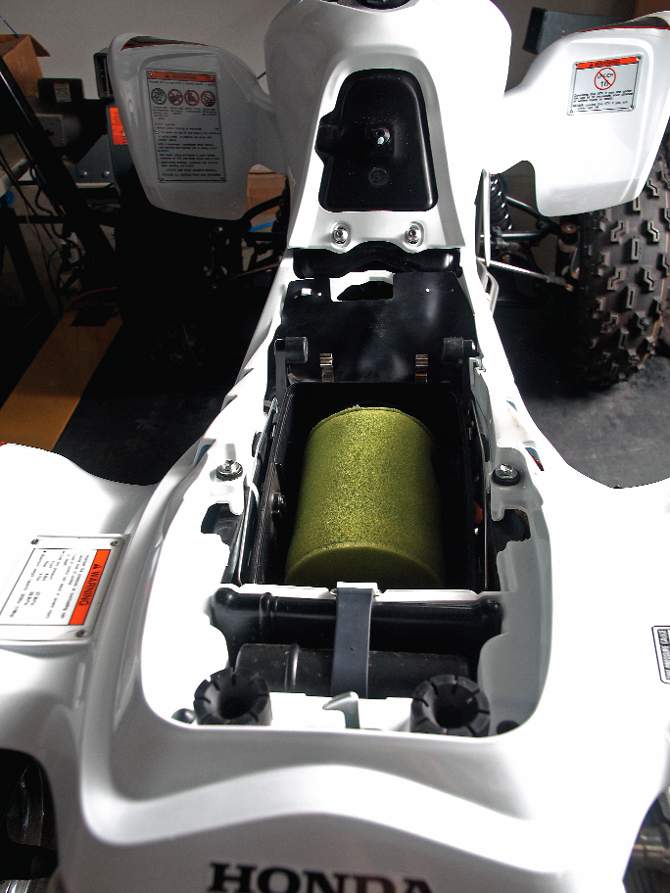 Removing the airbox lid allows more air to the filter, but the engine will want more fuel to compensate.

The next logical step is to get the air-fuel mixture right. When we opened up the exhaust and the airbox, we did nothing to add fuel. That meant the motor was very lean. The Motoworks lab has access to an oxygen sensor, and that sent us to a 168 main jet. Here’s where that business about testing with the throttle wide open becomes important. We got away with only changing the main jet on the dyno. In the real world, it’s not that simple. You would have to change the needle as well as the slow-speed jet, and maybe even the leak jet.

But, in the lab, our simple change to a bigger main resulted in another big gain. The peak was 38.69, but the oxygen sensor told us it was still lean. 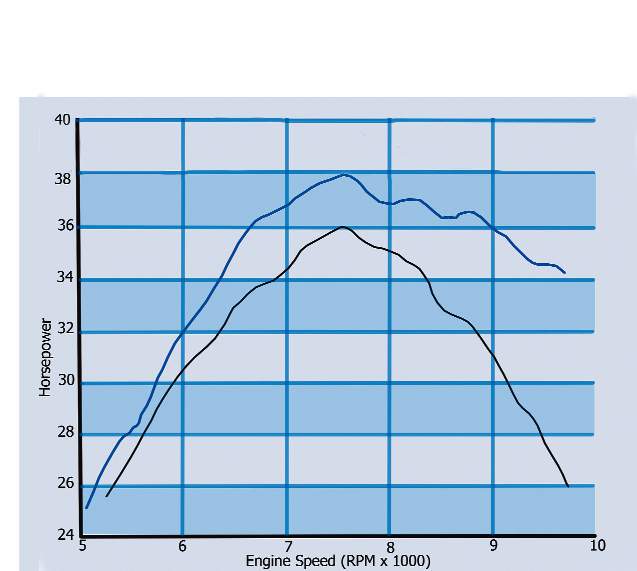 To be honest, we made a number of runs with progressively richer jets. But the only one worthy of display here is the final one. When we installed an incredibly rich 185 main jet, our best power resulted. The peak was an impressive 39.2, and the power curve was as broad as a house. We felt fairly certain we had gotten the most from our exhaust system, but now the barrier was elsewhere. The electronic rev limiter might not have been a factor with the stock pipe, but the motor clearly has more to offer at high rpm. It was still making 35 horsepower when the motor stopped revving. Could that roadblock be removed? 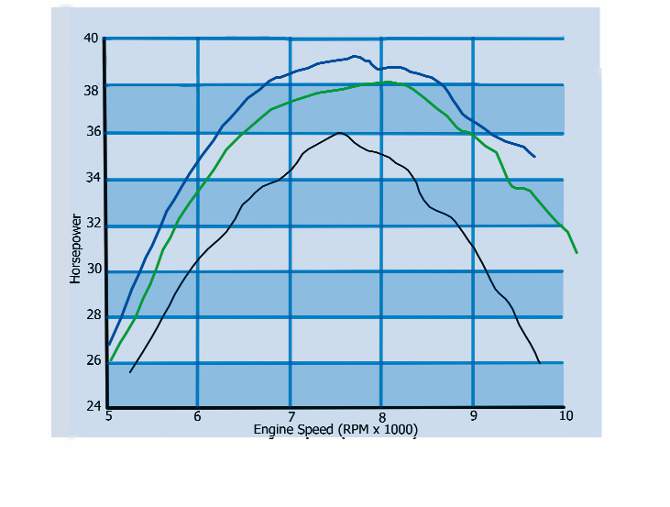 Disconnecting the ignition’s green wire brings 500 more rpm to the table. But without further modifications, those revs don’t help, and there’s a cost in peak power.

We know a secret. Virtually all the top Honda tuners do the same trick; they cut a green wire that comes out of the ignition’s black box. This changes the rev limiter and allows more rpm on top. The rev limiter isn’t there to prevent damage to the motor, but it does allow the TRX to pass that important sound test.

For our final run, we cut the wire and expected to see another big horsepower increase. Imagine our shock when we found that the motor lost almost a full horsepower at peak! Our new max power reading was 38.8 horsepower. The motor did indeed rev past the 9800 rpm barrier by another 500 rpm, but we caused other changes in the spark-advance curve that we didn’t anticipate—and that no one at Honda could explain. It seems that most of the 450’s testing was done in Japan a number of years ago, and now those engineers have moved on to other projects.

At a higher state of tune, the increased rpm would be much more beneficial. Revs become a more effective means of increasing horsepower when all the low-hanging fruit has been picked. Just as we found when we installed a slip-on pipe with no other mods, the change in the rev limiter would require other changes to make sense. Perhaps headwork might hold the key, or perhaps a cam, but those kinds of changes exceeded our mission’s goals. We were looking for cheap, lost power and we found it.

The lesson here isn’t that everyone should go dyno testing; that process only gave us pretty charts for publication. The real secret is seat-of-the-pants testing. Hours of it. You would be amazed how much more accurate the human dyno is, anyway. And, besides, riding your own quad is a lot more fun. 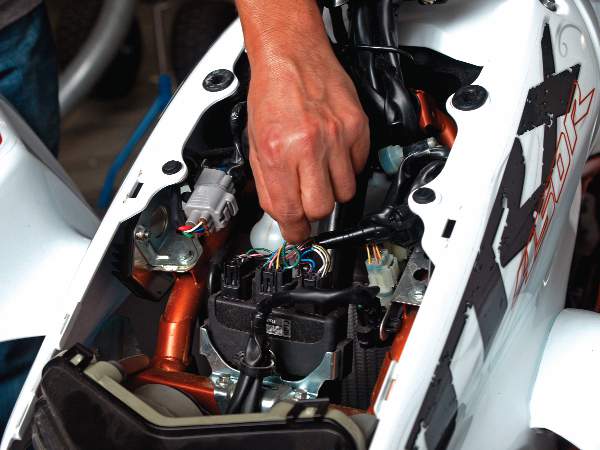 For racing, the green wire on the Honda’s ignition typically is cut to gain more rpm.
Share FacebookTwitterReddItEmailWhatsAppPinterestGoogle+

Mid Year Article Recap! Don’t miss out on what you might have missed