There has to be a good amount of never-used Honda parts sitting in garages all across the country. Parts like A-arms, shocks, axles, steering stems and handlebars immediately get removed from a machine if it’s going to be turned into a top-level racer. This is the norm for MX riders, woods racers and the WORCS build we are featuring. Those parts and much more were replaced in order to get Brian Sirevaag’s Honda to the starting line.

This quad started life out as a 2005 machine Sirevaag has been racing for years near his home in Las Vegas, Nevada. It was in need of a major overhaul, so the goal for this project was to build a competitive WORCS race machine that can also double as an awesome trail machine for any part of the country. It needed to be reliable to both race and practice on too. For our test we will hit the trails around Glen Helen Raceway in San Bernardino, California, and also race it at the popular Glen Helen round of the World Off-Road Championship Series.

MORE MOTOR
Honda motors are known to be pretty bulletproof. However, any time you wait to restore a 10-year-old performance machine, you have to pay serious attention to the condition of the engine. In this case, LMR Racing out of Utah ported the stock head, added +1mm-larger Ferrea exhaust valves and stock-sized intakes. A Stage 2 Hot Cams cam completed the valve-train mods. In the cylinder, a high-compression, stock-bore Vertex was attached to a Hot Rods OEM replacement bottom-end kit that includes a new rod, crank and all bearings.

On the intake side, Tokyo Mods supplied a 40mm FCR carburetor, which included a vent kit, fuel screw and hot-start system. The carb was mounted to the engine using a Dasa billet adapter, intake kit and foam filter. Exiting the engine, Dasa’s classic full-exhaust system was employed.

To get the power to the ground the entire catalog of Hinson top-of-theline clutch components were used. The BTL inner hub and pressure plate were installed with a billet basket and cover. FSC provided the springs and plates. Brian relies on Maxima Premium4 20w50 oil to keep it all cool. The gearing selection for this build is 14 teeth up front out of a Moose Racing chromoly countershaft sprocket and a steel JT 38-tooth product out back.

SUSPENSION
Sirevaag found that a 2008 TRX450R swingarm mounted right up to the 2005 was a good fit. He chose an Ars FX linkage to bolt the Exit X2 Series fully adjustable rear shock too. The swingarm housed an RPM bearing carrier, a Lonestar Axcaliber axle and LSR anti-fade nut.

Up front, a pair of Ars Fx 49.5-inch arms were connected to the stock spindles and frame. To beef up the frame, Brian used a Teixeira Tech gusset kit welded to the vulnerable areas. Afterward, Surface Effect powdercoated the frame, and McFadden Dale Hardware was used to bolt everything together. Ars FX also supplied a +2 steering stem and handlebar clamps. And attached to that a Pro Moto Billet/Fastway stabilizer was employed. Up top, Fasst Co. Flexx handlebars with a 14-degree sweep and Fastway Flak guards covered the Works Connection levers that were installed with the new titanium bolt kit.

For the real suspension damping, Exit-brand X2 Series fully adjustable shocks were installed at both ends. Wheel travel is measured right at 13 inches at both ends. A CRF poly skid plate and sprocket guard, along with a GT Thunder rotor guard, helped with protection. One of Brian’s best sponsors, GBC, provided 21×7-10 front XC Master tires and 20×11-9 XC Racers in the back mounted on Goldspeed beadlock wheels and equipped with TireBlocks front and rear.

ABOUT THE THEME
“As they did back in the World War II era, many men named their aircrafts, guns and any other use of weaponry after females that were important to them in some way,” explains Brian about the quad’s theme. “Some were named after wives, sisters, mothers, girlfriends and the ever-so-famous pin-up girls. A lot of the times you would find hand-painted portraits of a female on the old aircrafts. Following in the footsteps of history, my decision came quite easy—Warhawk, the Holeshot Holly edition. I used the term ‘Warhawk’ to tie in the quad and aircraft, but still adding my own twist of a very important female in my life. The theme is after the 1938 P-40 Warhawk, also known as the flying tiger. “This specific plane was used in World War II and was known as the third massed-produced American fighter after 1938 used by all major allies. Flying Tigers were the very first planes to make it up in the air during the bombing of Pearl Harbor. It was also considered to be one of the only single-engine, single-seated aircrafts, just like a quad. The most recognizable and original color to this plane was drab green, which is like an olive green. They had red nose cones, which is the center of where the prop is, and the wheels were a flat silver.

“My frame and subframe are olive green to represent the color of the plane’s body. I also did the beadlocks and hubs in the olive green to help as an accent. The wheels, swingarm and nerf bars are a matte silver to give it that old silver or gray look that the wheels of the plane were, and I did it to help give it an even distribution. My upper A-arms, steering stem and the center plate of my bumper are gloss red to help represent the red of the nose cone from the plane, as well as the red in the mouth. All the matte black parts on the quad were used as accents like they were on the aircraft, as well as to help match skid plates and plastics to help with the even distribution of color.“

CONCLUSIONS
Theme builds are fun to focus on, since we are so used to featuring so many stock machines and just as many full-race builds. This project had both. Brian not only took the extra effort to color-match every part of the Honda to go along with his idea, the components of the quad ended up working as well as how the quad looked. When we rode it around the track at Glen Helen, we were pleasantly surprised at how well it rode on its maiden voyage. It was as fast as anything out there on the huge uphill start straight and handled as well as most other modified Hondas we have ridden. The GBC tires hooked up well, and the TireBlocks inside them provided us some extra protection around the rocky course. We have a love/hate relationship with the Hinson BTL clutch this motor had. The back torque-limiter feature does a great job keeping the tires on the ground on long, bumpy downhills and doesn’t slow the quad down too much when you chop the throttle. However, if you do brake too hard coming into a corner or downshift a gear late and stall the machine, the motor won’t bump-start as easy as a standard clutch. For Brian’s A-class skill level and higher the BTL works well, but for an average guy we suggest the standard Hinson clutch. The rest of the build was spot-on— from the strong Lonestar axles to the custom Dirt Fiend graphics kit. Holly Holeshot the Warhawk is a success. It looks as good off the track as it performs in battle. 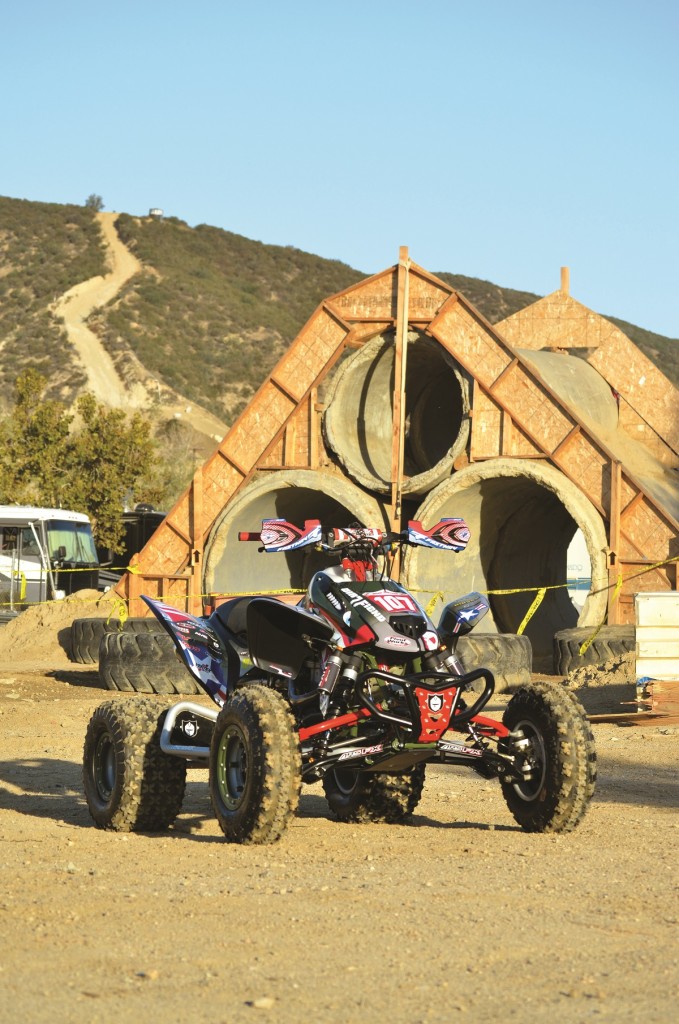