The aftermarket parts industry for ATVs and UTVs is continuing to grow, yet choosing the right performance products for your machine is not always a simple task. We decided to take a popular ATV in the sport quad category to the guys at Empire Industries for performance dyno testing. We started with Yamaha’s race-ready, fuel-injected YFZ450R in stock form and began adding popular, inexpensive, bolt-on parts to gain more engine horsepower. Installing aftermarket performance parts without knowing how and what they do to your machine’s engine could cause it to lose power instead of gain it. Engines are designed with a delicate balance of fuel-to-air ratio that is easily affected by changing the exhaust and air-filter systems. By simply removing the stock airbox lid on a machine, you can sometimes gain more horsepower by increasing the airflow to the air filter. Yet, adding an exhaust system to your fuel-injected ride without making other modifications, like a power programmer, will starve it for air or cause the computer to pump too much fuel into the mix, which also robs horsepower. 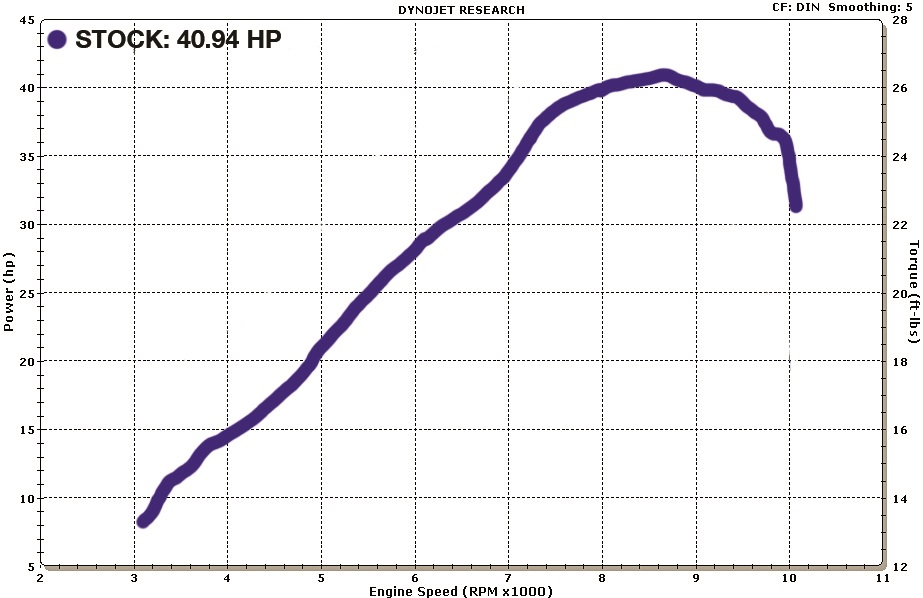 STOCK STAGE: NO MODS, 40.92 HP
We took the YFZ to Empire Industries in stock form. Without any aftermarket parts on it, the race-ready quad boasted an impressive run at the dyno by laying down 40.94 peak horsepower at 8600 rpm. Yamaha’s YFZ450R revs high, and the power starts falling off around 9000 rpm. That is a worthy power output for a sport quad that came right off the showroom floor with a couple breakin rides. 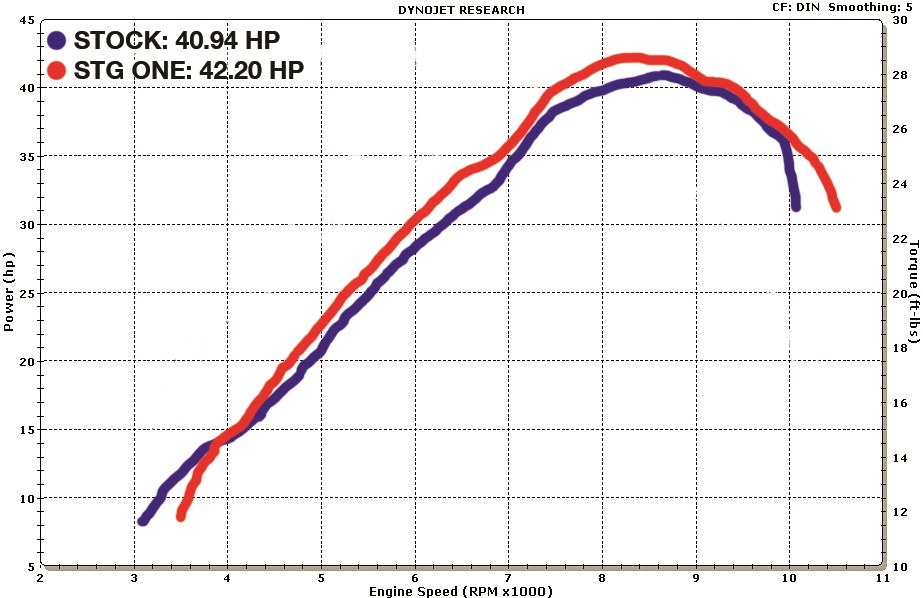 STAGE 1: AIRBOX LID REMOVED, 42.20 HP
While some may be able to pony up for major engine modifications on their ATV, others would just be happy to gain more power and keep their wallet full. We removed the stock airbox lid from the YFZ and ran the Yamaha on the dyno. At 8300 rpm, the quad gained a touch over 1 horsepower just by allowing a higher rate of airflow to the filter. The 450R’s computer quickly compensated for the extra airflow, but be warned, taking the airbox lid off causes more dirt to collect onto the filter, which blocks the flow of air to the engine. 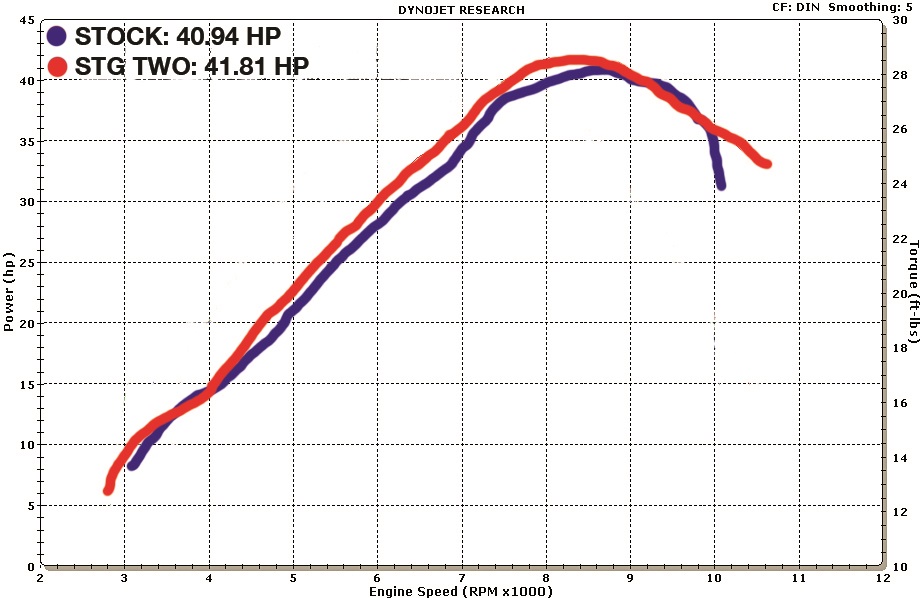 STAGE 2: PRO-TEC VENTED AIRBOX LID, 41.81 HP
We didn’t quite feel comfortable with having no airbox lid on a sport quad that was going to be seeing a lot of riding in the future. Pro-Tec makes a vented airbox lid for the YFZ450R that is as simple to install as the stock lid. Just clip it into place and you are good to go. We ran the Yamaha with the Pro-Tec lid on it and pulled 41.81 peak horsepower at 8300 rpm, which was slightly less than no airbox lid. With such little difference in horsepower, we feel having the vented lid is a smart choice to keep more dirt off the air filter. 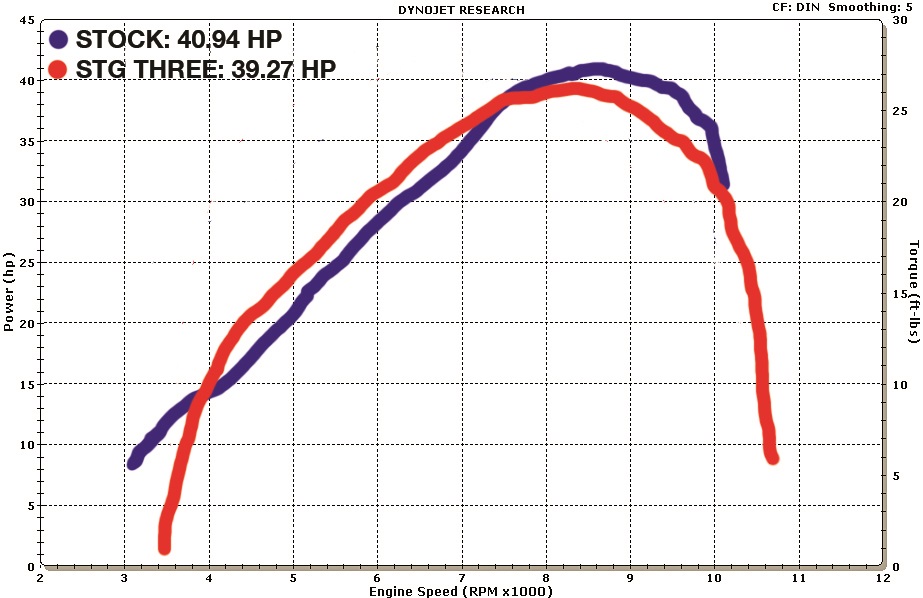 STAGE 3: EMPIRE EXHAUST SYSTEM, STOCK AIRBOX LID, 39.27 HP
Empire Industries makes an impressive full-exhaust system for Yamaha’s YFZ450R. We took the vented Pro-Tec airbox off the quad and reinstalled the stock lid. After changing lids, we installed Empire’s system onto the 450R and took a stab at the dyno with that setup. The engine produced a peak horsepower of 39.27 at 8300 rpm. As we expected, the power significantly dropped on this run. When you install a high-performance exhaust onto a machine with the stock airflow to the engine, power loss should be expected. The engine was choking and had a mean backfire. At this point, the Yamaha required two changes to gain the right power from the new exhaust: more airflow and a change in the computer’s mapping of the air-to-fuel ratio. 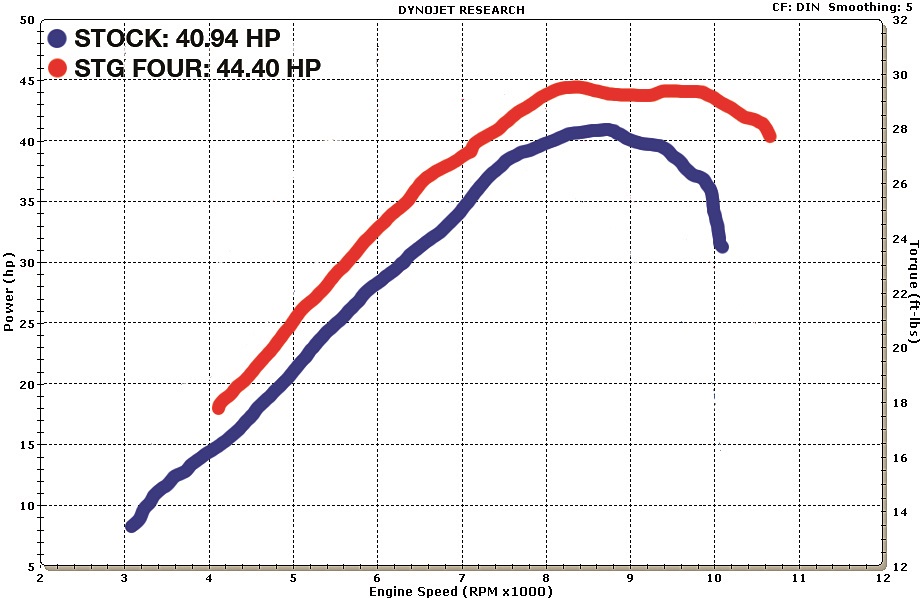 STAGE 4: EXPIRE EXHAUST, PRO-TEC VENTED LID, 44.40 HP
With a quick change of the airbox lids, we went back to the Pro-Tec for protection against dirt in the air filter, and we laid the YFZ’s power down on the dyno again. Without any disappointment, Empire Industries’ exhaust system brought the YFZ back to life with the added airflow to the filter. The pipe helped put out 44.40 horsepower at 8400 rpm, but the Yamaha still wasn’t running right and was falling flat at the higher end of the power range. We installed a Power Commander V onto the YFZ and manipulated the air-to-fuel mapping of the fuel injection. 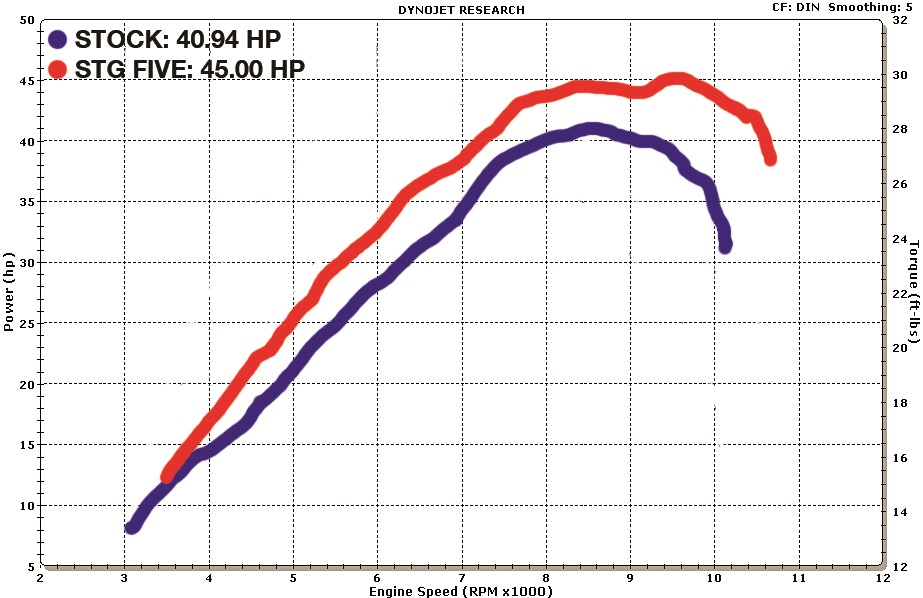 STAGE 5: EMPIRE EXHAUST, PRO-TEC VENTED LID, CUSTOM MAP, 44.99 HP
In stock form, the YFZ450R had a peak of 40.92 horsepower at 8600 rpm. While the numbers are by no means considered weak, we had a goal of gaining more power at a reasonable expense. The biggest power gain we noticed after installing the Empire exhaust, Pro-Tec airbox lid and using the Power Commander to up the fuel output in the mapping wasn’t the peak horsepower; it was how much larger of a gain we got through the whole power range, which the biggest increase was at the top. In stock form, at 10,600 rpm, the YFZ put out 31.94 horsepower before the rev limiter kicked in. With all the new modifications to the engine’s performance, the Empire exhaust system boosted the end of the power range to 40.45 horsepower. Talk about a major bang for your buck! Obviously, we had to take the Yamaha to the track and test it out in stock and the new modified form.

THE TEST RIDE
Yamaha’s YFZ450R is a powerhouse right out of the box as far as sport quads go, yet it tends to leave some riders and racers wanting more. We took the quad to where we felt it is most comfortable—our secret motocross test track. Our test rider climbed aboard the stock 450R and powered through a six-lap moto. He enjoyed the power of the quad in stock form but wasn’t expecting what was in store for his next moto.

We then installed the Empire exhaust, Pro-Tec airbox lid and adjusted the fuel-injection mapping. Our test rider took to the track for another six-lap moto, where the changes to the YFZ were noticed immediately. Lap times dropped, and in sections where the Yamaha struggled to clear jumps or power through turns in stock form, it tore through the track with ease. The low range had a mean grunt of torque, pulled hard through the midrange, but, most noticeably, boosted far harder through the top of the power range with the new modifications.

To our test rider’s surprise, no engine internals had been touched. The YFZ had major power gains from a great aftermarket exhaust system from Empire Industries, a highflow Pro-Tec vented airbox lid and a change in the fuel-injection mapping. You don’t need to break the bank to gain more horsepower from your ATV. The right knowledge is key to pulling the ponies out of your ride. 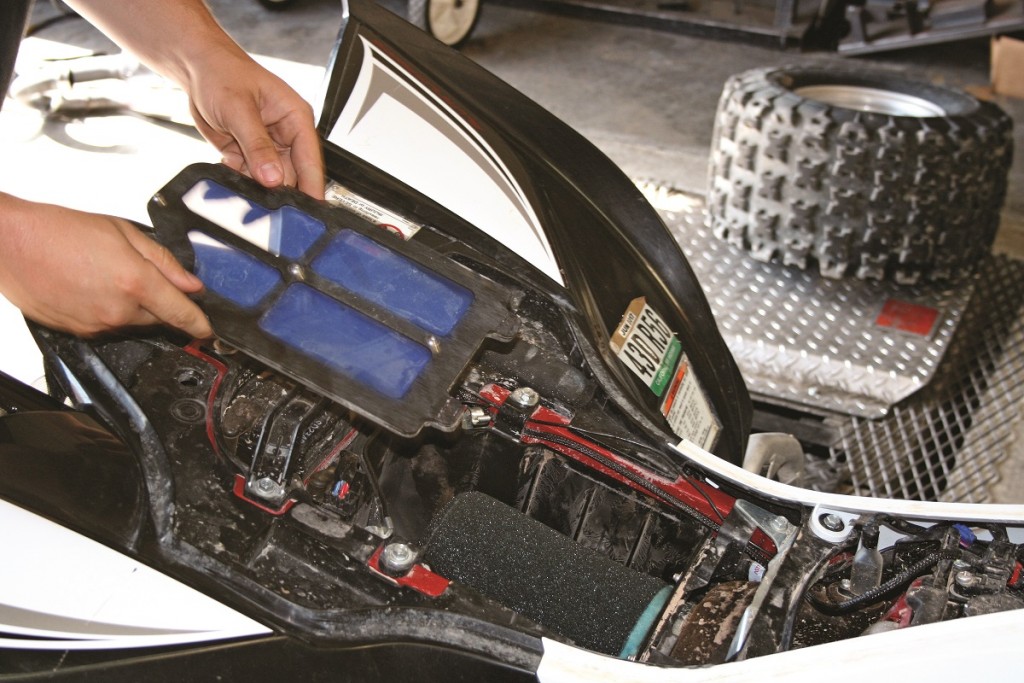 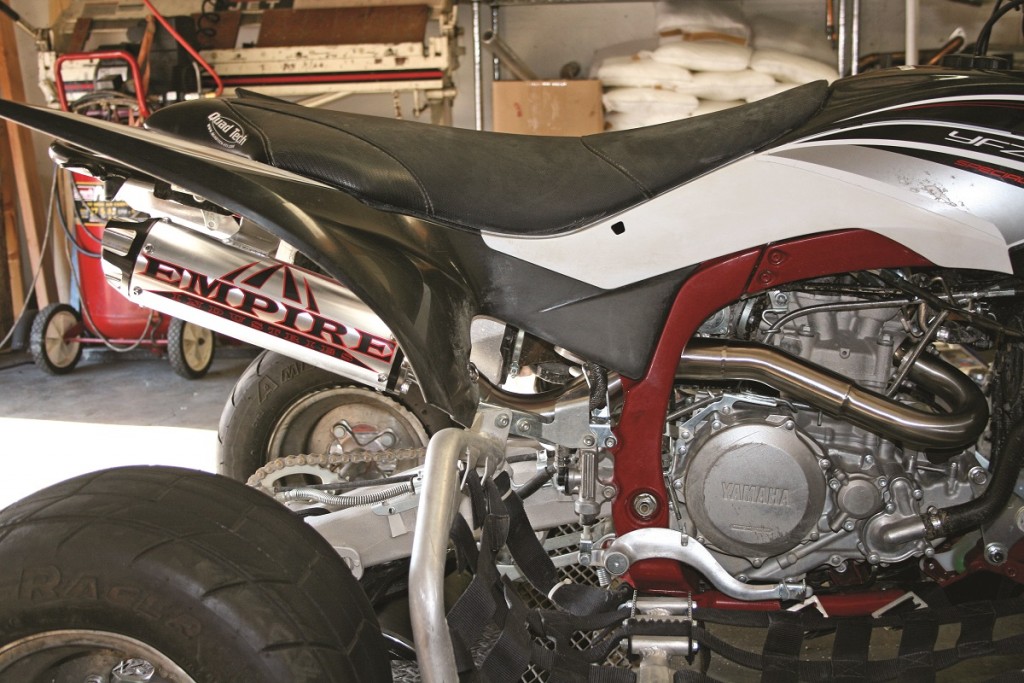