HOW TO: CHANGE A CVT BELT 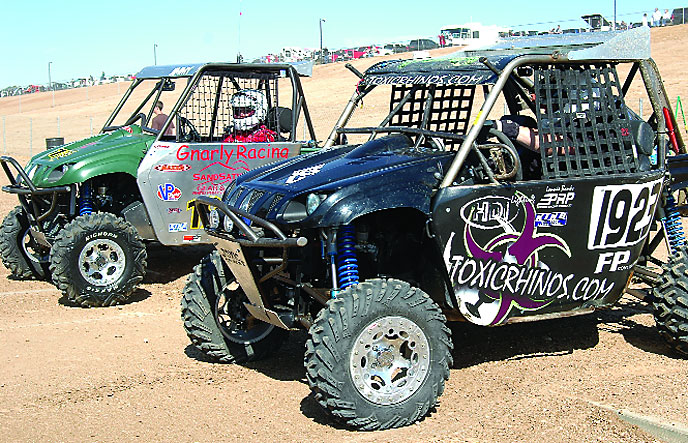 No matter how many hopup parts you have on your Rhino or quad, if your belt isn’t in good shape and working properly, you will not get the most out of your machine. Check your belt regularly and keep the system clean for longer life.

Changing a CVT belt can baffle someone who services a belt drive unit for the first time. However, it is usually very simple, and can be accomplished in a few minutes by a person with the right knowledge of the job. Follow along as we change the belt in our 2006 Yamaha Rhino. We chose the Rhino because ours was in need of replacement and with a vehicle like this you wouldn’t want a belt failure in some tight canyon where it would be nearly impossible to tow it out.
Believe it or not, a CVT belt can be changed trailside with the proper tools. However, we recommend trying it in your shop beforehand so you know what is involved and what tools to carry with you. On technical rides more than 100 miles long, we usually carry an extra belt along. A good rule of thumb for us is, if we’re bringing extra gas along, then an extra belt should be packed too.

IT’S ABOUT TIME
A good sign that the belt is starting to wear out is a change in performance. This means a diminished low- speed performance, with a typical “bogging down” at takeoff. As the belt continues to wear and becomes narrower, it will fall further into the secondary clutch. This means you are now trying to take off in second gear. You will also lose some top speed and the machine will not feel as “perky” anymore as more slack in the system makes it slower to respond.
To test whether your belt needs replacing or not, push down on the belt in the center. A good belt deflection should be one inch. If it is as much as two inches, and the top of the belt sits down below the top of the secondary sheave, you need a new belt. Transmissions that have engine braking functions, like the Polaris EBS system, and the Arctic Cat, Kawasaki-Suzuki CVTS with a separate slipper clutch for engagement, often require belts to be tight with no slack in the belt at all in order to function in the engine braking mode. Check your owners manual’s “maintenance section” to be sure.

WORN-OUT BELTS
There are a number of reasons why belts wear. Belts transfer power because of the friction between the belts and the clutch sheaves, and this is again determined by the side loads on the belt. When the CVT systems are required to change ratio in a hurry, friction forces in the shift mechanisms themselves can often prevent the components from following quickly enough, and they then lose side pressure on the belt for a split second, causing the belt to spin and wear faster.
Aftermarket parts that reduce friction in the shifting mechanism, like Teflon coated helixes or roller action kits, not only make the quad shift quicker but also extend belt life by reducing belt spin. According to Olav Aaen, “customers who install our Roller Action kit in a Polaris PVT secondary not only report great improvements in performance; they also double the belt life.”
Driving slow in a high gear is also hard on belts and sheaves. If the CVT starts chewing up belts, and the shifting is inconsistent, you may have broken motor mounts. This allows the motor to twist and go out of alignment, and this is very hard on belts.
Maintaining your CVT and checking belts at regular intervals makes riding your quad not only more enjoyable, but it may prevent you from getting stuck someplace inconvenient with a busted belt.
Always check the owners manual for the correct procedure and tools to use, as this can vary quite a bit from brand to brand. If you want to know more, Aaeen Performance has a complete guide called “Clutch Tuning Handbook.” It takes you through the theory and practical tuning of CVT clutches! You can order one by calling (262) 552-8981. The guide sells for $26.50.

With the seat and engine cowling removed, we use an electric impact wrench to remove all fourteen bolts on the Rhino’s CVT cover. Some quads require you to loosen the fenders from the floorboards to easily access the CVT cover. Keep in mind which hole each bolt came out of because they may be different lengths. We use a piece of cardboard to mark where they came from.

To remove the belt on most quads, first make sure your quad is in gear, and then lock the parking brake on, or have your buddy hold your brake tight. The brake locks the secondary clutch, which is located on the gearbox. Once the brake is engaged, grab the top of the belt between the two clutches and pull straight up. This will pull the belt into the secondary at the bottom by spreading the sheaves. This will give you enough slack in the belt so you can roll it off the top of the secondary clutch. Once the belt is off the secondary, you just move it forward and out of the primary clutch. Things are even easier on Yamaha’s Ultramatic CVT system. To spread the secondary sheaves, you thread two cover bolts into the center area. 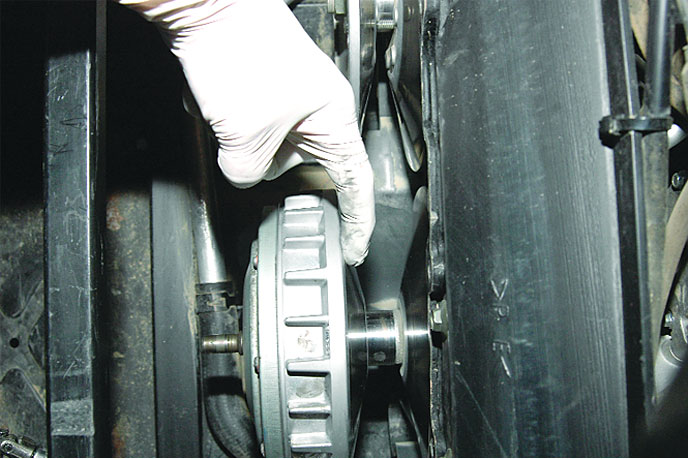 While the belt is off, use this opportunity to check the condition of your sheaves, specifically on the primary. A highly polished surface will make the belts spin more, and we often roughen the sheave up with a #80 grit emery paper before we install the new belt. If the belt has worn a deep groove, it’s time to replace the primary clutch, otherwise you are going to wear the belt quicker in low gear and the shifting will be inconsistent. This happens mostly on single gear sport machines where the owner goes bogging in mud, but can also happen if you don’t shift into low gear when going slow.
STEP 4: 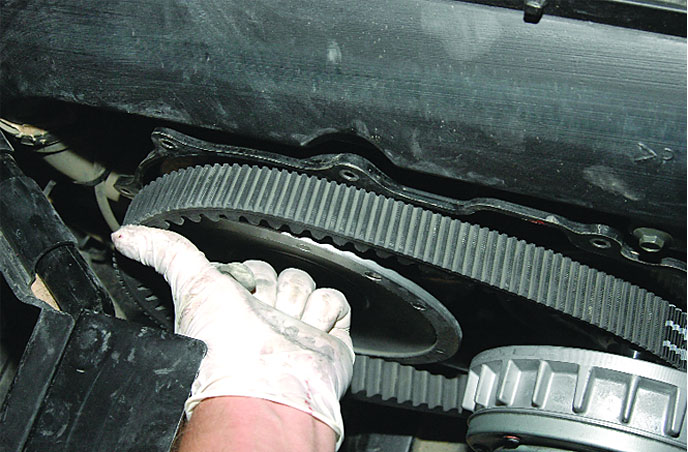 To install the new belt, first you put the belt on the primary and loop it back towards the secondary clutch.  The problem is getting the secondary sheave spread apart again so you can mount the belt. You want to spread the sheaves at least 1/8 inch so you can push the belt into the top of the clutch and have the belt start in at least 1/4 inch from the top of the sheave.  Once the belt is in the top you can then release the brake and slowly roll the vehicle backwards. The belt will then feed itself into the secondary clutch. If you can’t get the sheaves to spread apart by hand, you can use two large screwdrivers placed at three and nine o’clock to spread the sheaves enough to push the belt in. If you have to resort to this make sure the end of your screwdrivers are covered with duct tape to hide sharp edges so as to not gouge the sheave surface. 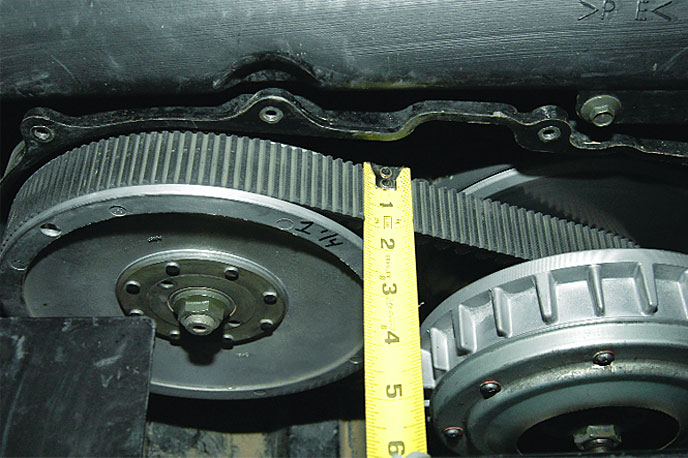 With the new belt installed, you should measure the width across the top so you have a reference when you check it later. Using a permanent marker you can write the measurement on the clutch itself for future reference. If the belt is worn 1/16-inch it may still work okay, but if it is 1/8-inch narrower it is definitely ready for replacement. 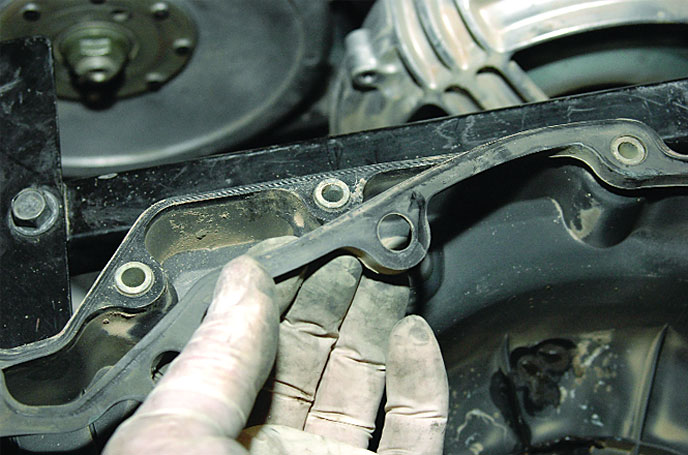 Before installing the CVT cover, inspect the O-ring or gasket and make sure it is complete and properly seated into the cover. Then reinstall the cover.

A Victory for Off-roaders in ca, policy aimed at cutting funds for off-road recreation May Not Be Implemented Until full public process is completed