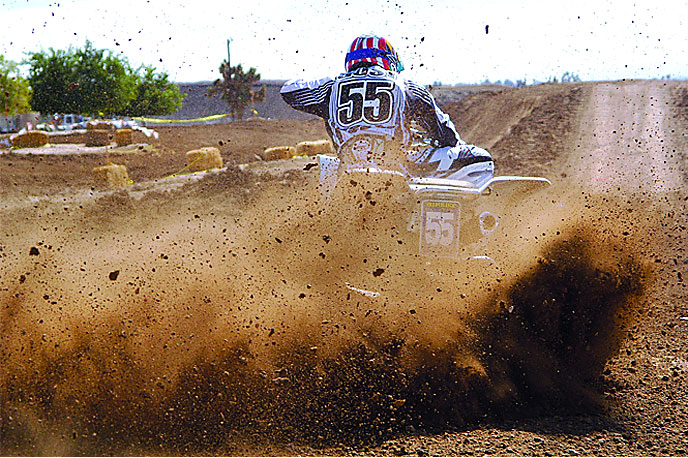 Doug Gust has a secret. Well, it’s not really a secret. He’s pretty open about it, and will tell most anyone who asks him what it is.
The secret? As the elder statesman of American ATV motocross, Doug knows that experience counts. Been there, done that. When it comes to keeping an ATV at full-tilt race speed, especially for an extended period, he has proven himself to be the master of his domain.

GETTING THERE FAST
Gust has proven this, time and again, over the course of his 17-plus years of professional ATV racing. Like his former competitor and friend, eight-time GNC MX champion Gary Denton, Doug knows that the racer with the most knowledge and best conditioning will almost always have a natural advantage over the pack.
That Doug has been able to do this for so long is stark proof. Gust’s knowledge and skill have taken him to the height of a fully factory sponsored ride with Team Yoshimura/Suzuki aboard an LT-R450 QuadRacer. Doug has repaid the factory with several National Championships, including the prestigious WPSA motocross title for 2006, and a strong second overall in the GNC MX Pro standings this year. All this from a guy who is pushing the edges of forty and racing against riders half his age.

BE MORE LIKE DOUG
Besides giving proof to the adage that old guys really can rule, Gust has accumulated a wealth of knowledge of what it takes to go fast and remain atop the leader board of the ATV racing elite, and he wants to share that knowledge with you.
We sat down with the “Digger” to get his take on what has kept this lanky and likeable Wisconsin native at the top of his game for so long.
Dirt Wheels: Doug, you’re coming off a tough racing season. How has the competition been, compared to years past?
Doug Gust: It was one of the most competitive seasons ever. It’s amazing how many fast guys there are now. The competition is the best it’s ever been. You can’t make any mistakes if you want to win.
DW: What can the “average Joe” racer do to make himself a better rider?
Gust: Practice, practice, and more practice. The only way you’re going to get faster, and more consistent, is to ride as often as possible. You should come up with a routine you follow when you’re out practicing. Buddy up with someone, and record each other’s lap times. Then go out and try different techniques or lines on your practice track and see if they make a difference on a stopwatch. That’s the only way to know for sure if something you’re doing is working for or against you.
DW: How about trail riding? Does it help with training?
Gust: Definitely. I love to trail ride and often I pick up on something while trail riding that I don’t encounter on a track. The more time you spend on your quad the better you know how it’s going to react. Besides, it’s a lot of fun, and having fun while riding goes a long way in making you want to ride longer and more often. 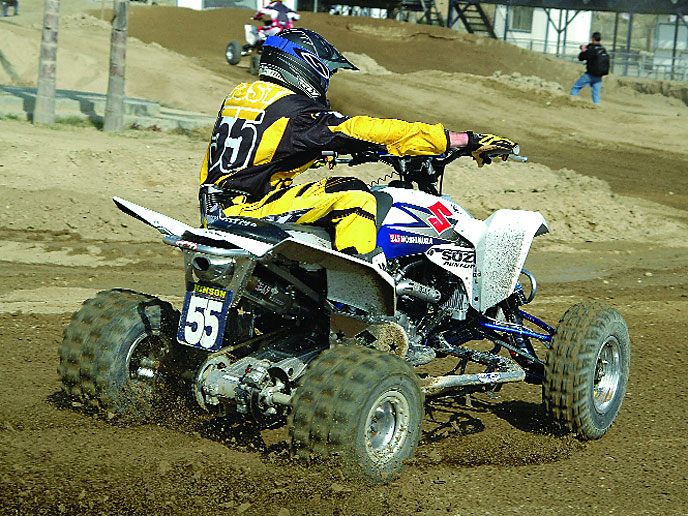 Weighting the inside peg while accellerating through a flat, sweeping corner is a technique that can help any rider get more traction, and thus more speed, going into the next turn.

DW: How important are starts? Do you have any special tips for riders looking to get the holeshot?
Gust: With so many fast guys out there, starts were more important than ever. Make sure you watch the starter and look for how the gate is falling before your moto. Be on the lookout for any telltale signs they might make before the gate falls, and time how long after the 30-second card turns sideways that the gate hits the ground. Sometimes it’s a subtle little thing you might notice before the gate falls.
DW: What’s the best spot to pick on the starting line?
Gust: Line up early and make sure you have a clear path ahead of you to the first turn. Where you line up depends on the type of first turn. The shortest distance to the first turn is usually where I like to line up. You don’t want to over-rev or blip the throttle on and off. Keep a steady rpm and watch the gate for the first sign of movement. Slip the clutch but don’t snap it off the line. Get your weight forward and anticipate the gate falling. By watching the races before yours, you should know how long it takes before the gate drops. Mentally count off the seconds, then at the first hint of movement, launch off the line.
DW: How do you train for the coming season?
Gust: I like to do some weights for upper body strength and the Nordic track ski system for endurance. I use the rowing machine to power up my legs as well. I’ll do thirty minute motos to simulate riding. The better your condition, the easier it is to ride at a faster pace for the entire race.
DW: What do you look for when you’re out in practice at the track?
Gust: You want to see how the jumps, ruts, bumps, and any other track obstacles, are lined up. You also want to run different lines to see what those parts of the course are like should you need to move over to get around someone. The shortest lines are not always the best. Try looking for the smoothest lines that let you get on the gas early and brake late.
DW: How about jumps?
Gust: Make sure the takeoff ramp is smooth and even. You don’t want to fly off a jump where there is a ragged or uneven edge or lip that can kick your machine sideways. I’ll practice coming up short on a set of doubles so I know exactly how fast I need to clear them.
DW: You have a reputation as a good jumper. Any special tips for our readers?
Gust: Three things you need to make sure of when jumping. First, make sure you’re lined up straight. Second, your speed has to be right for the type of jump you’re doing. Third, your body position. Move back as you approach it, move forward when you hit the face, and then position your body to control the angle of the quad in the air. You can use the rear brake to control the attitude of your quad in the air. More brake and the front end will drop. You want to angle the machine in the air to match the downramp angle and land with the gas on. Keep the throttle steady in the air, not too much rev.
DW: Twist or thumb and why?
Gust: Thumb throttle. I grew up with them and I’m more comfortable using a thumb, throttle. I also think you have more advantages on a quad with a thumb throttle. When making hard left turns your arm is usually stretched way out there. It’s easier to push a thumb than twist a throttle. Also on a quad, when you hit a bump in that kind of situation, a twist will keep the throttle on while a thumb offers more control.
DW: How about suspension setup?
Gust: We do a lot of suspension testing. Usually what I will do is set up the shocks where they suck up the rough braking bumps but not completely bottom out over the biggest jump. I might do as many as three different settings in practice, but once I’ve tried different setups, I stop at the third one. That’s the setting I will use for the race. Any more and you have a hard time knowing what’s working best on race day.
DW: Who is the hardest rider to pass out there?
Gust: Tim Farr. Tim has been riding for quite a while and he knows where all the fast lines are. He also knows where you need to ride if you’re trying to get by him. I think he picked that up from Gary Denton [laughs].
DW: Where is the best place to pass a rider, going into or coming out of turns?
Gust: Usually going into a turn. That’s where you can outbrake him and slip by. Make sure they’re not going to hit you, but don’t hesitate, and get right back on the throttle to make it stick. Put pressure on the guy in front of you and force him to make a mistake. Make sure you’re off to the side a bit from his line, so you can take advantage of any error and get by. I’ll try and pick out where I want to get by a guy and make my move there on the next lap.
DW: What’s the most important thing in working your way to the front?
Gust: You can’t ever give up. Determination is what separates the winners from the runners-up.

WANT TO IMPROVE YOUR RIDING SKILLS?

A LOOK AT ATV RACING 20 YEARS AGO