YOUR MOTOR’S FUEL-INJECTION: what you need to know

— EFI is here to stay. Deal with it. The curmudgeons who claimed it was a passing fad have all changed their story and now claim they knew all along that dirt-going vehicles would go digital. In theory, the advantages are huge. EFI can give you more adjustability, it can be more economical, more reliable and mechanically simpler. But now that most high-end quads are injected, we’ve found that theory and reality don’t always mesh. The most troubling part is that we have seen quads that are somewhat tamper-resistant, making hop-ups more complicated. What happened?

Fuel injection is nothing new. Wikipedia says that mechanical versions go back to 1925, and electronic fuel injection first appeared in 1957. Today, it’s universal in cars and trucks, but the last industry to accept the notion was ours: off-road vehicles. The reason is obvious, although rarely stated out loud. We were the last ones to be blessed with governmental emission standards. Today’s ATVs have to meet EPA regulations in all 50 states, with California tacking on its own more stringent standards. EFI is viewed as a cleaner way of doing things, and although carburetors can easily meet the current standards, everyone knows that tighter regulations are on the way. Beyond that, EFI is just more modern and accurate. Carburetors became incredibly complicated, with multiple circuits and band-aids designed to cure various woes. Throttle-body EFI, on the other hand, is amazingly simple in a mechanical sense. You have a body with a butterfly valve and a number of little squirt guns pointing into the motor. A pump
provides fuel pressure to those injectors and a little computer tells them when to squirt. Injectors are either off or on, like a light switch. The amount of fuel metered out is determined by the pulse width, or how long the injector squirts, and there will be many of these pulses in a single intake stroke. 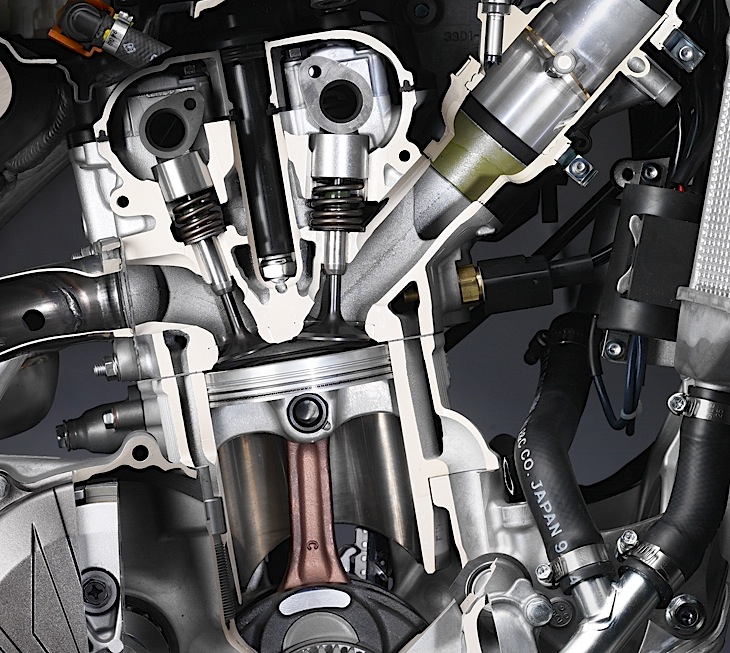 The processor on an ATV typically uses input from several sensors to decide how rich or lean to make the mixture. Throttle position, manifold pressure, air density and air temperature are taken into account in an “open-loop” system, which works great for cold mornings or high altitudes. A “closed-loop” system goes one step further by using an exhaust gas sensor to check the mixture after combustion and alters the metering accordingly. A closed-loop system is much more accurate, because it can adjust for fuel type and engine modifications, whereas an open-loop doesn’t know and doesn’t care. But right now, there aren’t many closed-loop ATVs for a variety of reasons; expense and reliability being on top of the list. And that brings us to the real world. Fuel injection has made home-grown modifications more difficult than ever.

Let’s say you just brought home your new fuel-injected 450 and want to get the most from it. The stock exhaust is very restrictive, so you install a competition exhaust, which is capable of more flow. So far, the stock EFI system is fine, but you might not notice that much of a power gain. The problem is that it can now exhale more easily but is still restricted on the intake side, so you remove the airbox lid. That’s when things get tricky. The open-loop system is still metering out fuel for the meager flow rate of the stock motor. You now have way too much air, so the motor is likely to hesitate, bog or sputter. What can you do? 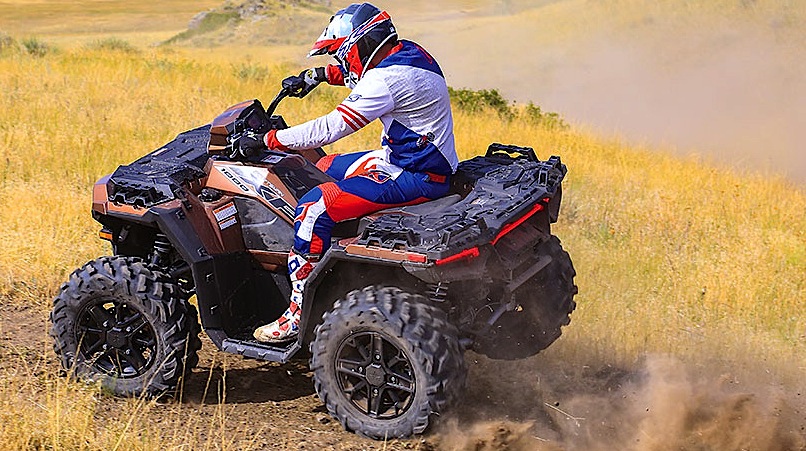 Most all 4×4 quads are fuel-injected too.

There are three basic ways to deal with this. You can replace the whole electronic brain, you can “reflash” or reprogram the stock CPU, or you can use a piggyback system to modify the original map. In the case of the Suzuki QuadRacer R450, Suzuki gave you an additional option. The R450 has a “competition” injection map already hidden in the stock CPU that can be accessed with an add-on product like the Yoshimura Cherry Bomb. The EPA and the California Air Resources Board frown on this particular method, and its future is unclear at this time.

In the automotive world, reflashing the CPU is common practice. The problem is that most injection systems are encrypted so well that hacking into the system is an expensive and difficult process. It’s simply not cost-effective for an aftermarket ATV company to go through that process. On top of that, it’s a little risky. Once the ATV’s processor is reprogrammed, the original information is written over. You better be right the first time. That leaves replacement systems and piggyback systems as the most practical way to get more performance out of your quad. 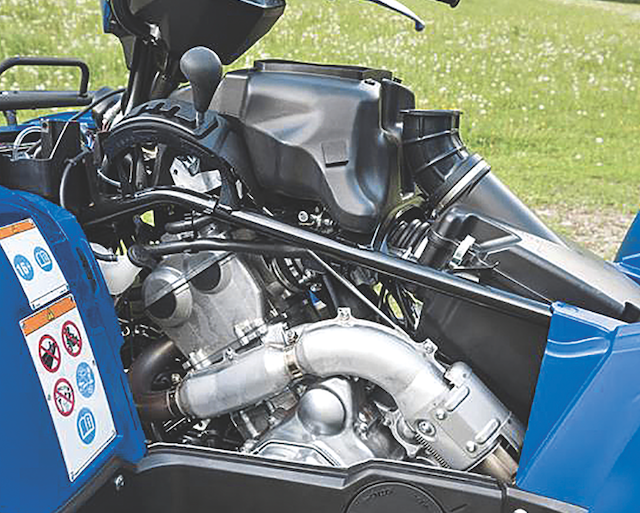 The throttle body on the new Grizzlies is just as hard to get to as the carbs were on the old Grizzlies.

In the ATV world, we are following in the footsteps of the street bike industry where fuel injection first appeared in the early ’80s. They had all the same problems. The first product to deal with it effectively was the Dynojet Power Commander. This was a piggyback system that hijacked the signal between the stock CPU and the injectors, changing the pulse width according to its own program, which could be altered with a laptop computer. Today, Dynojet is still the biggest EFI player in the motorcycle world. In the ATV industry, however, another company has made a big impact. Mark Dobeck left Dynojet in 1997 and developed another piggyback system that required no laptop. It was a solid-state box that allowed the user to adjust the metering in three different engine operating  zones. But he didn’t offer it for sale to the consumer. Instead, he made his product available to other aftermarket companies who, in turn, sold the product under their own labels. Thus the HMF Optimizer, FMF Power Programmer, Dr.D Mod Box, Motoworks Fuel Management Interface, Trinity EFI Controller and almost 70 other products are all manufactured by Dobeck. That doesn’t mean they are identical, though. Each of Dobeck’s clients installs its own baseline mapping according to its own goals. The price varies from one company to the other depending on its own investment in testing and developing the baseline map, but most pricing is around $250. 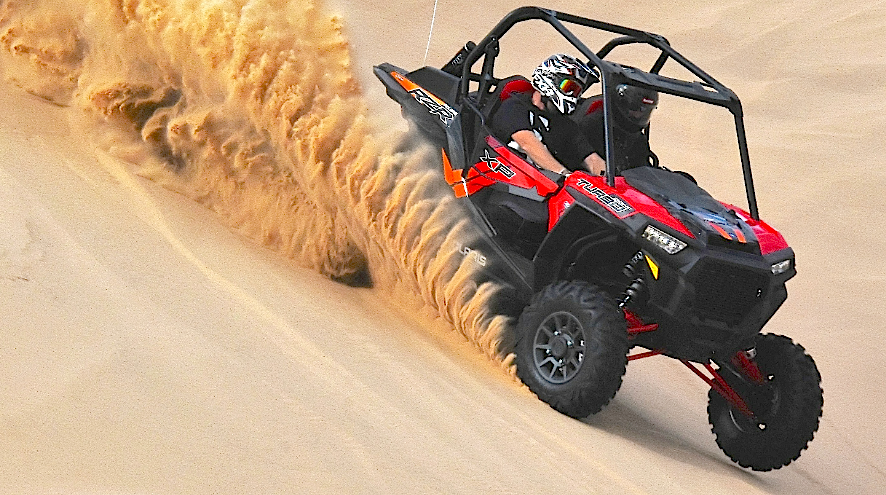 Your UTV doesn’t have carburetors either — it’s fuel injected.

In virtually all ATVs, the electronic brain for the fuel-injection system is integrated with the ignition. Spark advance is part of the big equation, too, and if engine tuners want to go a step further than fuel metering, a more elaborate approach is required. An Australian company called Vortex had a head start on the ignition side of the electronic puzzle, making multi-curve ignitions for dirt bikes and ATVs for years. When EFI came along, it was only natural that Vortex would make complete systems controlling both spark and metering. Duncan Racing now sells a Vortex ECU with 10 spark/metering maps preprogrammed in place, anyone of which can be selected with the turn of an adjuster. Additionally, you can alter fuel metering in three different zones, so if map three is nearly perfect, but has some small hiccup on the bottom, you can just adjust the low-end without throwing the rest of the map away. JD Jetting is also offering a complete ignition with both spark and metering, although at this time the only AT
V application is for the Yamaha YFZ450.

Another avenue in the fuel-injection world is offered by a company called Bazzaz. This self-mapping technology uses an exhaust sensor to create a closed-loop system. You don’t have to keep the exhaust sensor in place at all times, just long enough to create your own map and save it. The obvious advantage here is that you can save yourself a lot of trial and error. If you alter compression, cam timing, intake, exhaust and then run race fuel on top of everything else, there’s virtually no way that anyone’s preprogrammed map can suit your needs. With a self-mapping system, the CPU comes up with its own map while you ride. Yoshimura is offering its own version of the Bazzaz technology with the PIM-2. This is a piggyback modifier that can be used by itself or in cooperation with the self-mapping DATA kit.

Of course, everything is changing minute by minute in the EFI world. Dynojet, Bazzaz and Dobeck all have new technology available or in development. New companies are popping up all the time. Fuel injection is still a very complicated and confusing subject, but the days where EFI systems are tamper-proof are gone. For now, they’re just tamper-resistant. 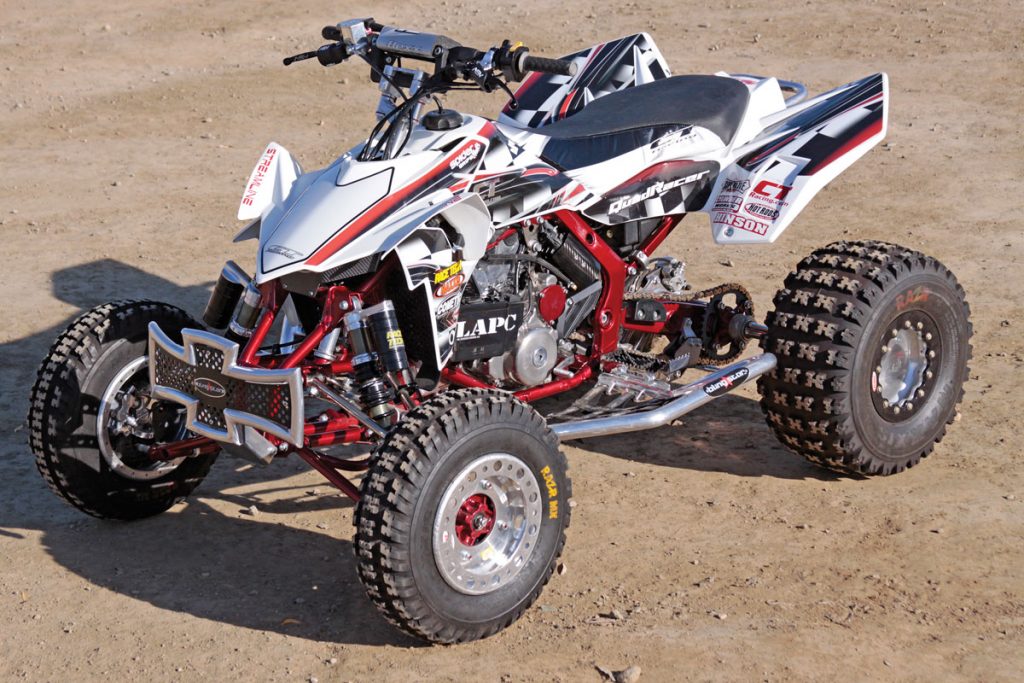 Suzuki was the first one in the pool with fuel injection for a 450 race quad. There were two programs in the QuadRacer’s CPU: one for emission and another for competition that could be accessed with the Yosh Cherry Bomb. The EPA and CARB didn’t like this arrangement. 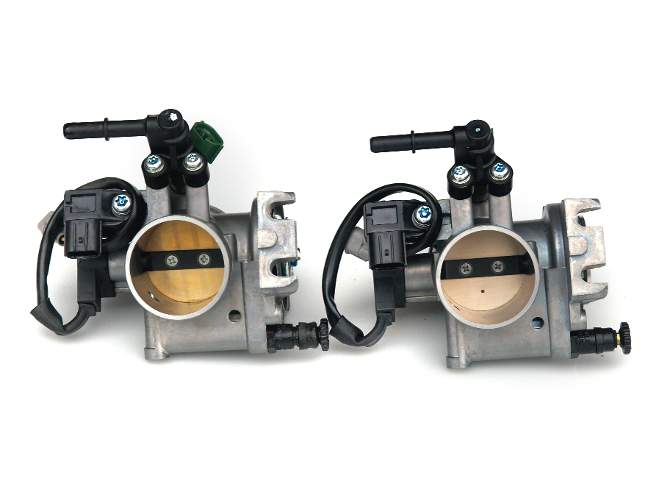 Several companies are either modifying stock throttle bodies or remanufacturing them completely. Injectioneering, (310) 953-2915, redesigns the stock butterfly and the bore. 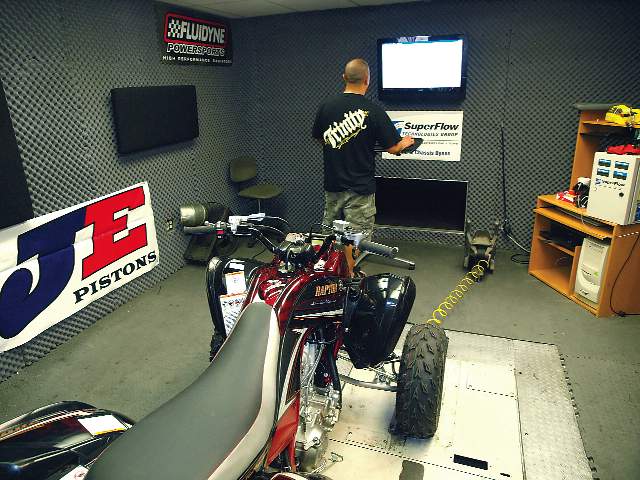 MSD is an automotive company with years of experience in fuel injection. The Blaster is a piggyback system that modifies both spark advance and fuel mixture. 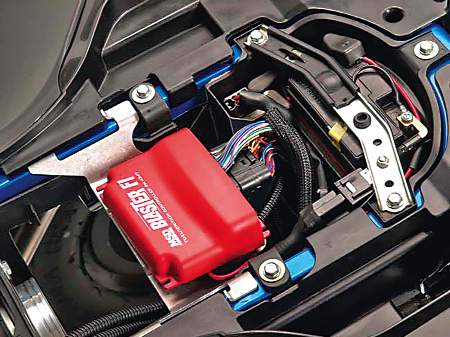 Trinity Racing relies heavily on dyno testing to come up with the proprietary EFI map that comes in its Fuel Controller.
Many of the factory race teams use a special ignition and CPU system that isn’t available to the public. This helps mostly with diagnostic and development. 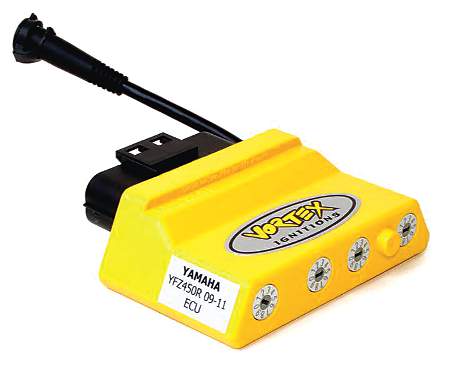 Vortex is an Australian company that is distributed in the U.S. by Duncan Racing. The entire ignition and EFI brain is replaced with a unit that gives you almost limitless options for spark advance and fuel mixture, and it sells for less than $700. 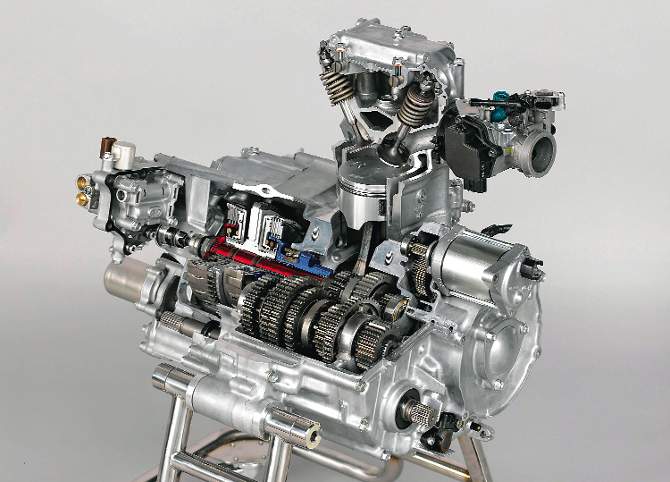 Utility quads have EFI well ahead of sport ATVs. The obvious advantages in dealing with temperature and altitude are most beneficial in that world. 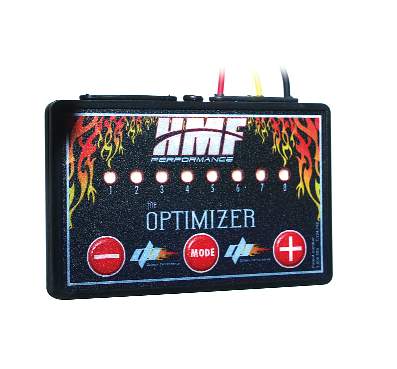 The HMF Optimizer is a piggyback unit that alters the stock EFI’s hardware. It’s preprogramed with HMF’s map, and it can be altered to quit an individual ATV’s needs.
Share FacebookTwitterReddItEmailWhatsAppPinterestGoogle+