There’s an old adage that says, “Necessity is the mother of invention.” Well, in times of war, the military, its suppliers and troops do a fantastic job of coming up with equipment to get things done. One such company, RP Advanced Mobile Systems, has been getting the job done for over a decade, and they are using Can-Am Maverick UTVs to do it. Their complete Light Tactical Vehicles are built combat strong, yet are versatile enough for other government and municipality uses, such as search and rescue. Civilians as well can take advantage of the RP Advanced products to outfit their own rides with products such as run-flat tires, the Delta FX paddles, and much, much more. We recently spent some time in RP Advanced’s signature Light Tactical Vehicle, and we wanted to share with you some of the unique features it was equipped with. 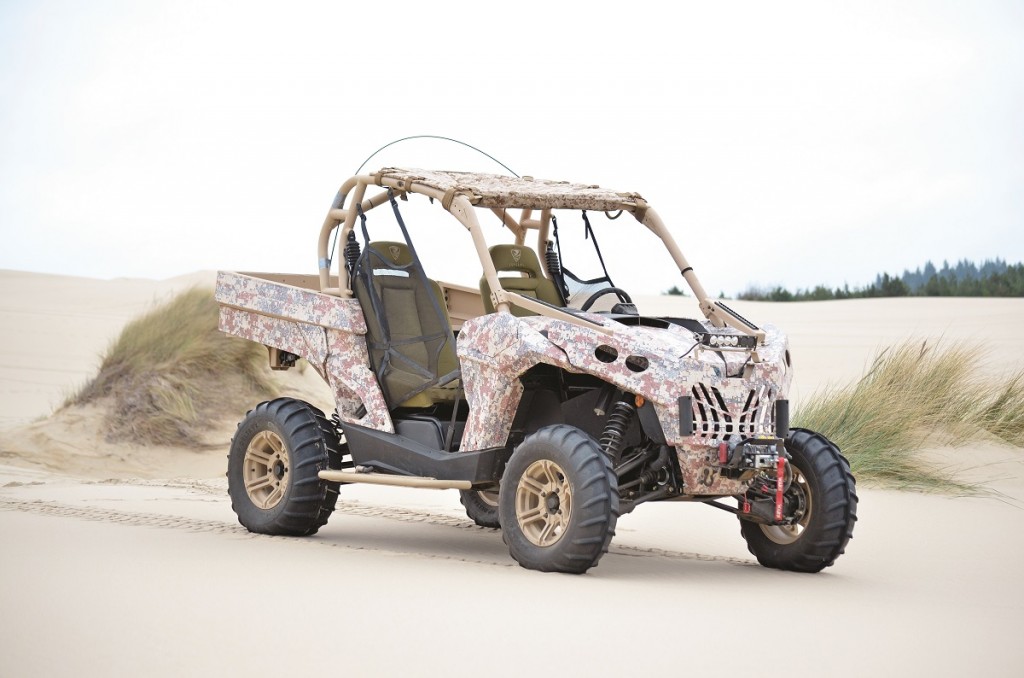 CARGO
For any military application, the ability to carry extra cargo or people is a high priority. Since the Maverick only comes with a small plastic cargo platform stock, this area was in need of an upgrade. The guys at RP Advanced built a totally new steel cargo box with a latching tailgate, flat bottom floor, ridged sides and tie down tracks. Unfortunately, there’s no dumping bed, but if you want to use your Maverick for work and hauling duties, this is how to do it. The bed ties into the frame up front, and in the rear it connects at the rear A-arm pick-up points and doubles as a 2-inch hitch receiver. 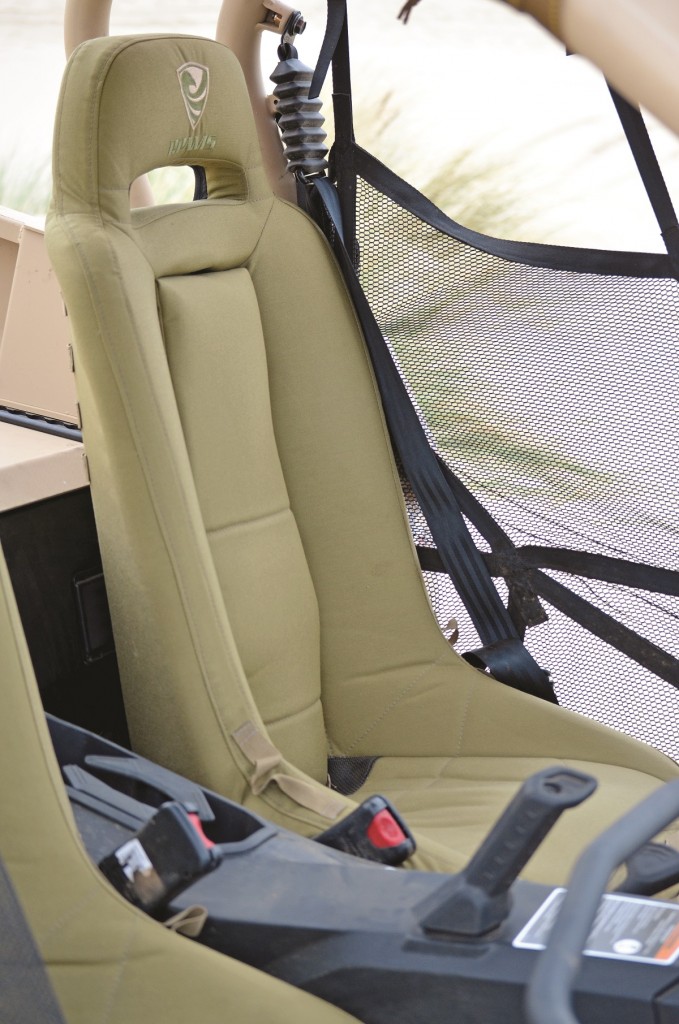 Inside the cockpit the custom seats can accept four-point harnesses and are equipped with litter straps in the back. The camo nylon roof is also equipped with litter straps, both on top and underneath. Litter straps are used in medical and rescue operations so that items can be secured or carried quickly. The semi-soft roof attaches quickly with 2-inch Velcro straps and has driver and passenger hand-holds. Those hand-holds can actually be used by personnel who may be standing on either side of the machine using serrated steel platforms. Those floorboards can be deployed flat or rotated up and out of the way if needed. 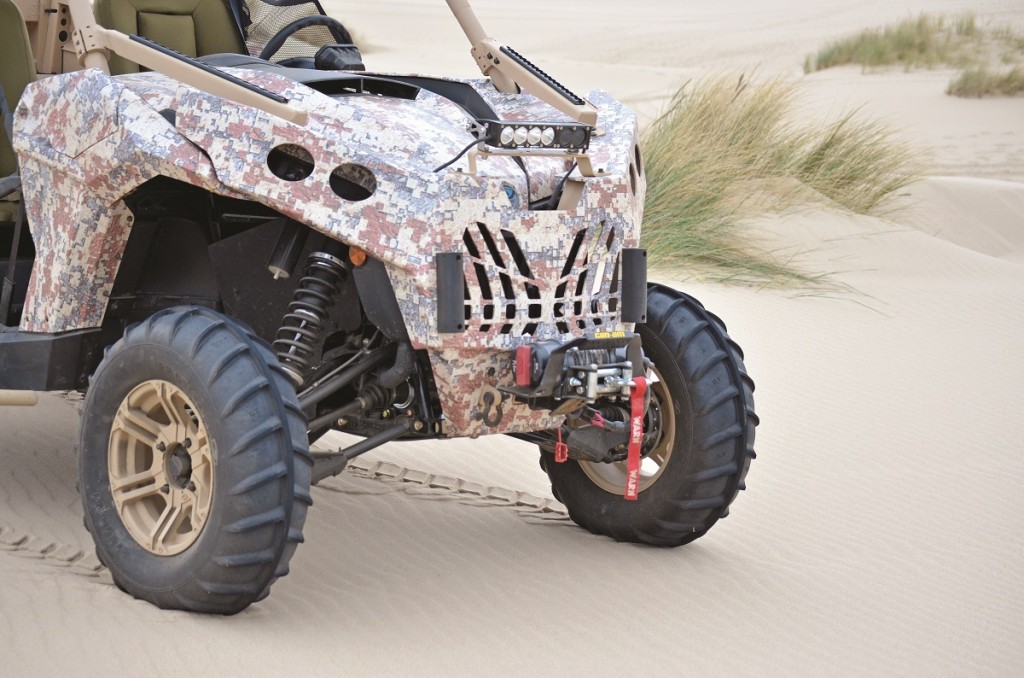 Up front the machine was outfitted with a huge bash plate and a brush guard that’s strong enough to mount a large winch, rubber push bumpers and, in this case, a small light bar. More tie-down racks are bolted on toward the A-pillars as well. On this car the dash and center hood piece remained stock. 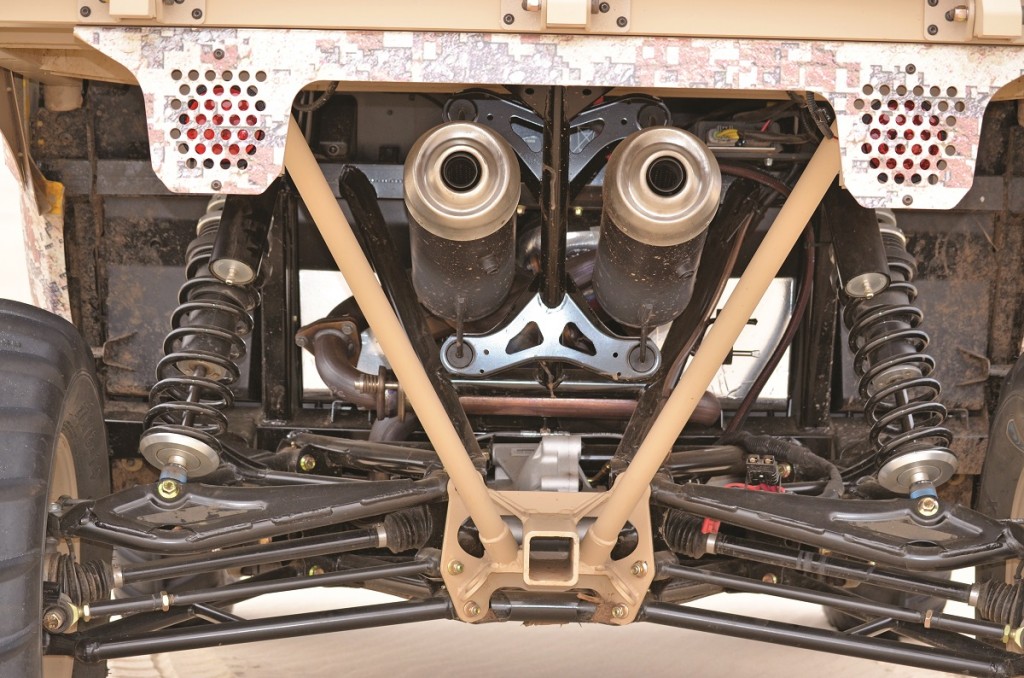 SHOCKS AND TIRES
Along with the added cargo-handling capabilities, there’s RP Advanced’s compression-adjustable MSI shocks. This shock uses a big shaft-mounted adjustment collar that is easy to use. MSI also has shocks that are considered semi-active since the driver does have the ability to change settings from in the cab depending on terrain harshness and cargo levels. JRI has been developing sports car, Indy car, NASCAR and military shocks for years. They are just getting into the UTV market and will soon be a threat once racers start winning on them. 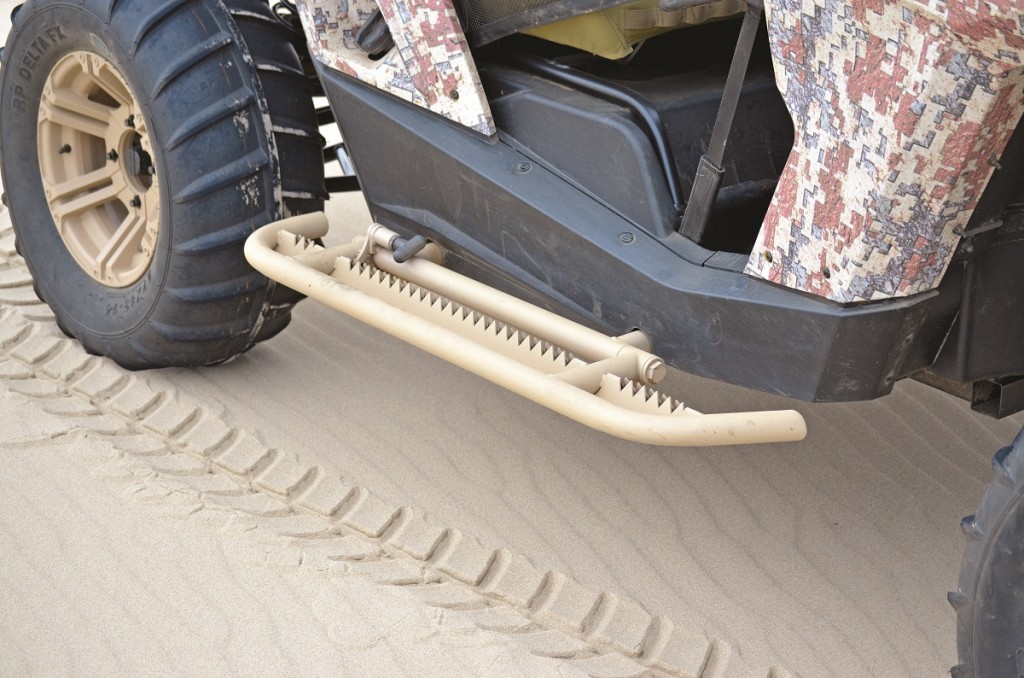 On this machine they handled the extra weight very well. We only drove the Maverick in the dunes, but we were impressed at how hard you could attack the whoops with it. We didn’t feel any bottoming or bucking, and the G-outs were taken very smoothly as well. The smooth, forward motion in the deep Oregon sand was facilitated by a set of four Delta FX paddle tires. The four-ply tires are stronger than a typical paddle, and with all four tires scooping, turning is precise and never digs in on take-off. Furthermore, these tires have a 5/8-inch-wide, solid rubber section running down the middle that will let you drive on hard-packed dirt, concrete or asphalt without any problems whatsoever. We did a complete product evaluation of these tires in a previous issue. You can find it at www.dirtwheelsmag.com, as well as more pictures from this test session. 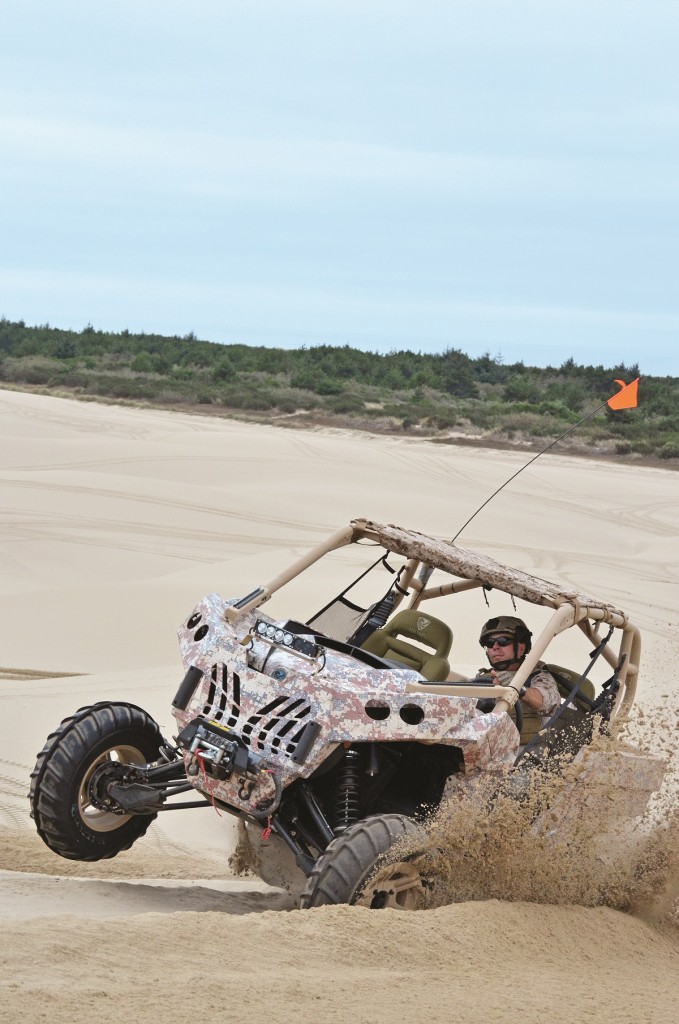 CONCLUSION
You may not want to build a search-and-rescue machine or a military rig out of your Maverick, but some of these components would be a perfect fit for hunters, racers or duners. If you are not planning on running your machine in the sand, RP Advanced also carries several sizes and versions of a 6-, 8- or 12-ply run-flat tire for other applications. Some of the products RP Advanced sells will fit on other brand machines as well. You can see their complete product line at www.rpadvancedmobilesystems .com or call (503)-434-9446.