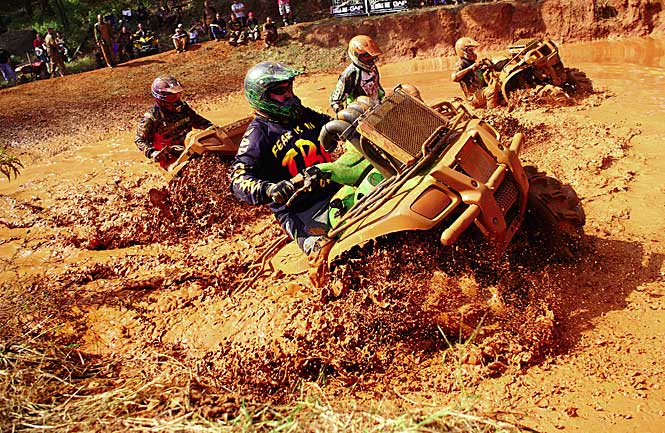 The popularity of competitive mud racing has been growing at a  fevered pace, especially in the southeastern USA, with East Texas, Louisiana, and Georgia leading the way.
It was only a matter of time before the lifted and snorkeled crowd began talking among themselves about having a set of competition rules for their sport. Something that would unite them and also allow the mud racers to begin running against each other in a National series.

GENTLEMEN, GET YOUR MUD ON!
In late 2007, Championship Mud Racing, or the CMR, was born. Their 2008 schedule included six competition dates spanning from June through November with points awarded throughout the season in several different competition classes for ATV and UTV mud racers. Classes included Mud Bog, Show-N-Shine, and Mudda-Cross Competitions, with series points for each class being awarded. There were classes for mini, stock, and women folk. Then the heavy hitters were lined up with monster sized quads ranging from 0-499 cc, to a Super-Modified class, which allows any size ATV engine you want to strap inside a four wheeler chassis. The object? To sling boatloads of mud at their wary competitors.

(Left) This outstanding-looking modified Rhino was entered in the Show and shine competition and had spectators doing double takes to see if it was an official police squad vehicle or not. (Right) One of the finest-looking show mudders at Mud Stock was this skull and bones outfitted 4×4. These boys know a thing or two about detailing and showmanship.

The ultimate goal of the CMR is to see the growth of ATV Mud Racing as a truly competitive sport and give competitors a place to showcase their emerging talents. The series finals were held recently at the Texas MudCreek Off-Road Park, which is located near Jacksonville, Texas. After five events, the best mud racers in the Southeast caravaned to the East Texas mud park to see who would become the first National Mud Champions of the CMR series. 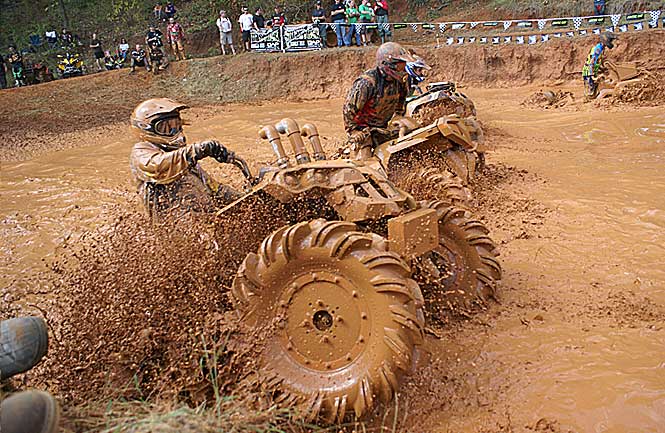 WELCOME TO MUD STOCK
Can-Am/ITP/GAP Broadcasting and Gorilla Axle were the primary sponsors of the series final at Jacksonville. The fitting title to this season-ending event was MUDSTOCK. If you attended, you could surely relate the antics, and festival-like atmosphere surrounding this championship event to the classis ’Woodstock’ music festival.

(Left) Arctic Cat represented with a monster lifted and highly detailed Mud Cat at Mud Stock. This mud kitty was perfect in every detail. (Right) If you race in the mud, this will eventually happen to you. Like in rodeo events, ‘ain’t no cowboy can’t be throwed,’ in muddin’ it’s…‘ain’t no mud racer can’t be towed’.

When everything was said and done, the crowd and participants had shown they truly deserve their own National Championship series. The competition was fierce, the machinery as trick and complex as any on the National Motocross or Cross Country scene, and the competitors just as determined to win. The stage has been set and Mud racers can only expect this and other mud series events to grow ever more popular. This particular event showed that Mud Racing has cracked the big time with a professional series that allows mud specialists to show off their talent. For more information about The CMR and its sanctioned events, contact them at (318) 345-8186 or go to www.championshipmudracing.com.

For more inormation go to www.championshipmudracing.com