ATVS AND DIRT BIKES HAVE A BLAST AT BUFFALO BILL’S 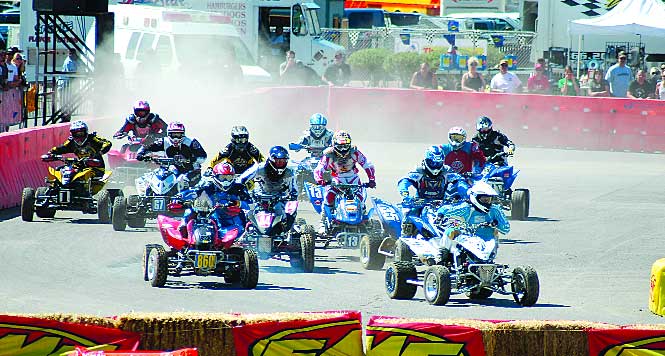 Supermoto racing returned to the Buffalo Bill’s Casino parking lot, in spite of threatening weather…for yet another go round of high speed pavement/dirt racing high-jinks.

ATVers and dirt bikers converged on the Nevada border casino burg of Stateline to do battle in an epic hybrid event that has captured the interests of both groups of racers. The Southern Nevada Supermoto Association hosted the Stateline Supermoto-Cross event at Buffalo Bill’s Resort and Casino in Primm, Nevada. This was all amidst threatening skies. While the weather tried to put a damper on the program, event organizer/promoter Marche Karger and his staff were determined to run their race.
“We worked hard for a week straight to prepare an epic track for the riders, and then the rain came. We basically rebuilt the dirt section of the track both Friday and Saturday mornings of the event and still managed to pull off the programs for each day. I gotta tell you, we have the best crew on the planet working with me!” stated an ebullient Marche Karger after the races. 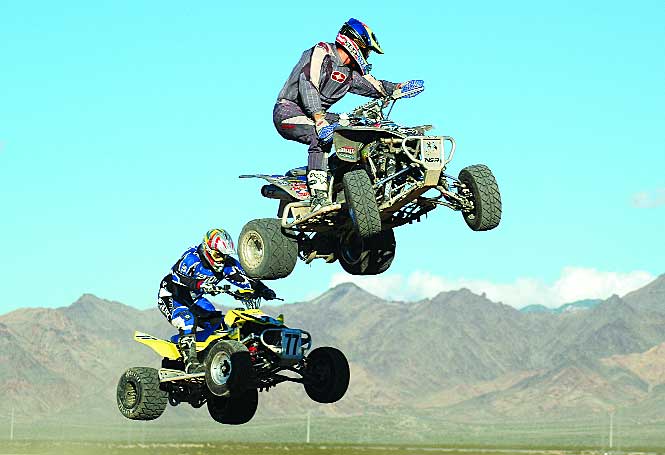 Nic Granlund and Arizona’s Nic Pacheco dice in their heat race. Nic had to race his backup practice quad when his racer blew up prior to the event. Even a tumble on the track during his heat didn’t stop the big Swede from working his way through the pack to take second behind Daryl Rath in the main event. Tough guy.

MORE RIDERS, MORE FANS
Even with the threatening weather, there were 315 riders and over 550 entries for this hybrid supermoto and motocross event. The racing was some of the best yet on this technical, part-pavement, part-dirt course that gave the racers a chance to try out their flat track, road race and motocross skills, all on the same lap.
There were many lead changes taking place in the ultra wide dirt sections with ATVs and dirt bikes providing some great racing action in the myriad of classes.

AMAZING BOMB SQUAD DUAL BACK FLIPS
H-Bomb Films’ ATV “Bomb Squad” racers, and Jimmy Fitzpatrick of the Metal Mulisha dirt bike crew, put on an incredible intermission freestyle show on Saturday afternoon and stunned the crowd with an amazing demonstration. The crowd went wild as they got to witness an incredible bike and quad freight train trick that had both a dirt bike and quad do simultaneous back flips over a gigantic 70-foot gap, one after the other, with only a few feet between them. A rare sight to be sure.

PRO MAIN ACTION
The Pro Quad Supermoto class certainly didn’t disappoint any of the many fans who were on hand to witness some of the best quad supermoto racers in the country battle it out.
Nic Granlund, Daryl Rath and Frank Batista were on the gas and powered their race quads to an exciting pro finale on Sunday. Nic Granlund of Las Vegas, Nevada, has won the last two Supermoto Stateline Pro ATV events. Minnesota’s Daryl Rath was left having to play catch up (not Ketchup!). Both racers wanted the win badly, and the crowd got to see these dynamic racers battle in the Vet 25+ class in an earlier heat race. Rath took top honors in the Vet class with Granlund closing fast after swapping to his backup practice quad when his race quad suffered a mechanical failure. Nic rode his stock-engined YFZ450 and it was clearly down on power to Rath’s all new Polaris 525 racer. 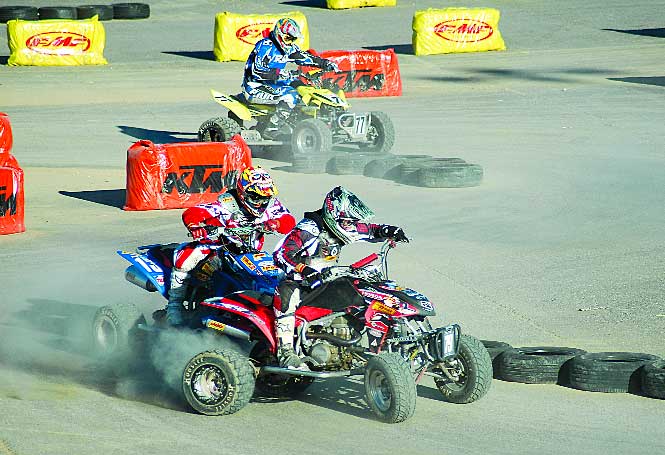 The race action was fast and furious at Stateline. How often do you get to see tire-smoking action at the finish line of a race?

The ATV Pro class was a rip-roaring shootout all day. During the heat race for the Pro class, Granlund took an unexpected header that left him battered and bruised. His chances for a third Stateline victory would fall by the wayside with his crash and mechanical failure, leaving him to start from the back of the pack in the main event. Rath, meanwhile, won his heat race easily and was on the front row for the main aboard his Polaris Outlaw 525.
Rath jumped out to a commanding lead at the beginning of the 12-lap main event, and never looked back. He rode at a super fast and smooth pace. Nic Granlund made an incredible charge from 19th all the way up through the pack. Nic rode with heart and courage and was even able to pass an on-the-gas Frank Batista with a lap to go, working his way up to second place by the time the checkered flag came out. Both racers vowed to return and do battle again in April of 2008 at the Stateline Supermoto Challenge.

UTV’S, MUSIC, GIRLS, AND FUN
The Side by Side or UTV class proved to be entertaining as always. Dana Creech showed up in his new Polaris Razor and won the heat race, but had to leave before the main event when a nosedive in the whoop section caved in his radiator and ruined his motor.
In the main, the lead changed three times before the pack even left the asphalt section. After the first couple of laps, Corey Prescot worked his way up front, while Cody Mitchell and Danielle Corbin did battle for second and third place. This year’s UTV race was much more exciting and promises to be a worthy addition to the SuperMoto lineup. 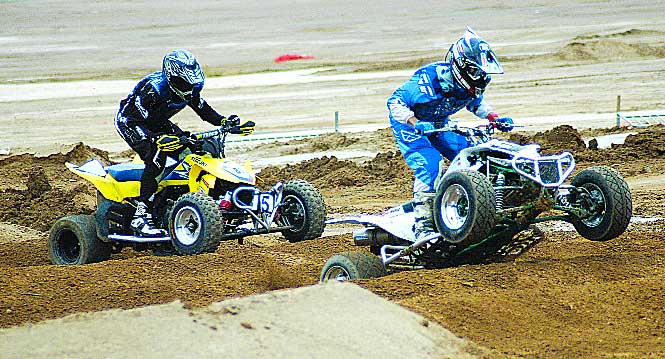 Jagermeister Music presented Smile Empty Soul, Evolocity, and Durress for the crowd’s entertainment after the racing was completed on Friday and Saturday nights. The racers and spectators stuck around to rock out and have some fun in the desert. There were also plenty of hot-looking ladies gracing the sidelines and pits during the weekend’s races and pit babe watching was a sidelight that many male spectators engaged in.
Southern Nevada Supermoto has just signed a multi year deal with Buffalo Bill’s Resort and Casino to host the Annual Stateline Supermoto Challenge event at their property each April. Vice President of Sales for the property had this to say, “We have enjoyed our relationship with the Stateline Supermoto Challenge, and are excited to be the host property for this exciting event for the next three years. We look forward to a successful future of racing at the Terrible’s Primm Valley Casino Resorts”.
For more information on the Stateline SuperMoto series contact them at www.snvsupermoto.com