Since Yamaha discontinued the Rhino in 2011, Polaris has had an easy time getting to the top of the sport UTV category. Sure, there has been a little competition from Can-Am and Arctic Cat, but the public has overwhelmingly chosen to buy RZRs over the others. The real threat to RZR sales came back in June 2015 when Yamaha released a teaser video showing they were coming back to play.

After the YXZ1000R finally hit showrooms in October, more questions arose. Everyone was asking, is it as good as a RZR? They have similar horsepower numbers and are basically the same size. Yamaha’s suspension system turned out to be closer to a Can-Am Maverick than a RZR. We suspected they would be close until we finally drove the YXZ. It was a completely different animal and offered a different day of fun.

After the Dirt Wheels crew got our hands on a long-term test unit, we went right into a shootout. We were just as curious as you are to see exactly how they compare. We drove them in the same desert environment that we have thousands of miles of driving RZRs in. Along with high-speed testing, we did plenty of low-speed driving in the rocks, canyons, mud and trees. 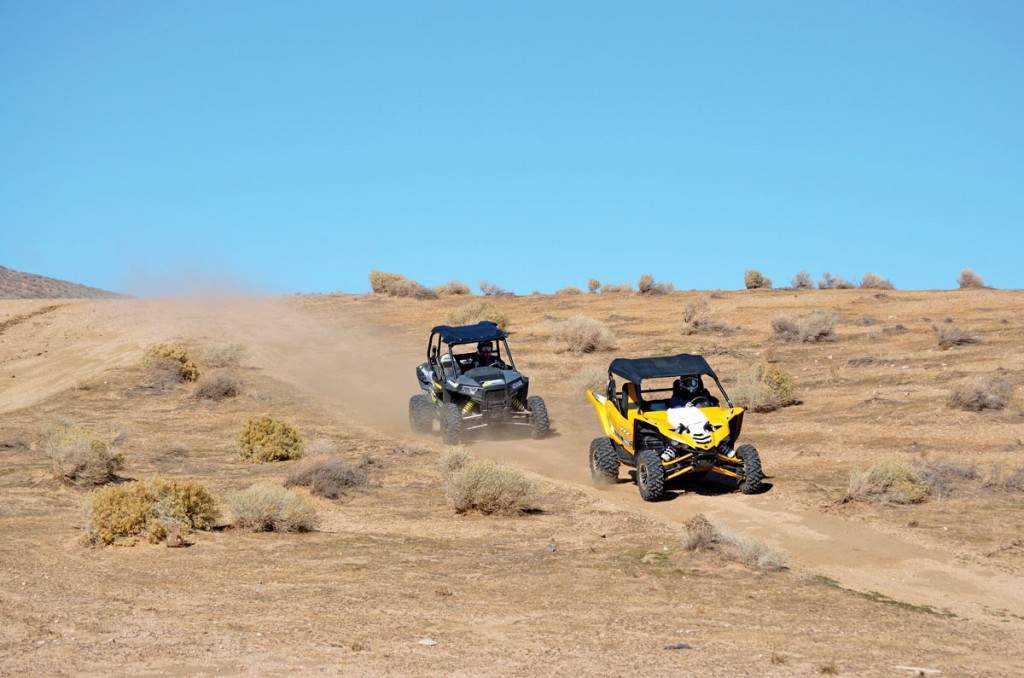 COMPETITION
It was tough to choose exactly which RZR to compare the YXZ to. Polaris has a handful of different 1000cc models to choose from. After careful consideration we went with a Fox Edition car for the test. Out of all the different RZR options you can buy, performance- and price-wise it’s the closest to the Yamaha. Both machines have Fox shocks, front and rear sway bars and six-ply Maxxis Big Horn tires. Price-wise, expect to pay around $20,000–$22,000 depending on which model or brand you choose. Turbo RZRs are $5000 more. That’s the main reason we didn’t compare that model. In a future test, we will include Arctic Cat’s rejuvenated Wildcat and the Can-Am Maverick.

According to California Air Resources Board specs, the engines produce just over 100 horsepower. However, getting that power from the spark plugs to the lugs on the Maxxis tires, the journey is quite different. Polaris uses a smooth, twin-cylinder DOHC engine mated to a gearbox via a belt-drive CVT transmission.

Yamaha uses a three-cylinder engine that is just as smooth-running. However, to get the power to the ground, a shaft comes out of the front of that engine and goes to a five-speed gearbox located between the seats. From there separate drive shafts go to the front and rear differentials. The Yamaha does not use a belt or chain. We found these different philosophies really set the two cars apart. Both cars have four-wheel independent drive shafts along with four-wheel disc brakes.

SUSPENSION
Up front things are very similar. Dual A-arms handle the movement of the Fox 2.5 shocks with 16 inches of travel. Sway bars are also found on both machines. Out back, the two manufacturers go about things differently. The current RZR XP 1000 uses trailing arms out back guided by thin radius rods. This setup provides huge travel numbers at 18 inches. Yamaha uses a trailing A-arm setup. It has dual arms controlling movement and provides an inch less at 17inches. Yamaha offers full adjustments on their shocks, including compression, rebound and threaded preload. Polaris shocks do not have rebound adjusters.

A couple other factors that affect suspension action is wheelbase and tire size. The wheelbase is nearly identical on the two machines, with the RZR being a half-inch shorter at an even 90 inches. Usually, the longer, the better in this case. On the tires, the RZR tires measure a full 2 inches taller at 29 inches versus 27. Taller tires help the car roll over bumps better. However, a taller tire can add weight as well. But when we race RZRs in the desert, we added taller and heavier eight-ply tires all the time with good results.

COCKPIT
The two cars in this contest are two-seaters. The driver’s seats are adjustable to fit a wide variety of people. To test the limits, we had a test driver that was 6-foot-5 and over 300 pounds. He could fit in both but had a little more room in the RZR. However, the seat slider on the Yamaha worked way better than the one on the Polaris. No matter how tall you are, it’s best to adjust the RZR’s seat while you are standing out of the car rather than sitting in it.

In terms of doors, we like that Polaris has evolved away from nets to a small V-shaped door that is very easy to open. However, they do not protect the occupants much from debris flying off the front tires in many cases. If you saw back and forth with the steering wheel you can get a lapful in the RZR. Yamaha’s full doors are too easy to open and protect the occupants better from that flying debris. Full doors on any machine will trap more heat in the cockpit just as it keeps things out. It seems to be more noticeable on the YXZ1000R.

In terms of quality, the Yamaha’s interior is superior to the RZR, but the RZR is not bad. The gauges are well placed in both, as are the glove boxes. Yamaha placed the cup holder over by the passengers’ legs so there is no risk of a beverage container bouncing out and getting in the driver’s way.

You feel like you are sitting a lot lower in the YXZ versus the RZR. It feels more like sitting in an Arctic Cat Wildcat. The distance between the driver’s seat and the ground on the YXZ is approximately 23 inches. That distance measured on the RZR is 26 inches. Polaris does claim the RZR has a half-inch more ground clearance. You don’t feel high in the RZR, but when you jump between the two machines you can really feel the difference.

TRAIL TIME
Before this pairing we have had hundreds of miles in the YXZ1000R and thousands in different RZRs. Those miles have been in the dunes of Glamis, across the SoCal desert and around our seven-mile test track. So for testing purposes, we wanted to get a base time in with each machine around the track. The riding surface is mixed terrain with hardpack, rocks whoops and sand washes. Our fastest driver’s elapsed time in the YXZ1000R was 8:27 flat. Our time in the Fox Edition RZR was a lot faster at 8:10. 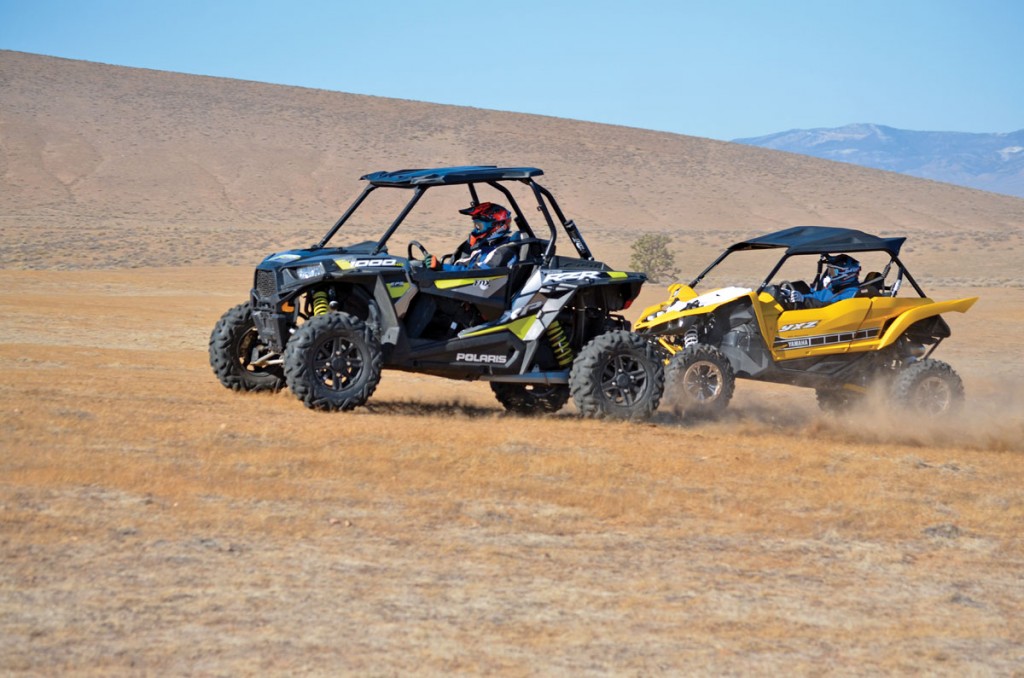 In a 500-foot drag race with both machines in four-wheel drive the race was pretty close, but 9 times out of 10 the RZR would take the win. Both machines top out at 78 mph. The fastest the YXZ can get to that number is 17 seconds. The Fox RZR took 17 seconds as well. Since those numbers are so close, it’s the seat-ofthe-pants feel and the whole driving experience that should be considered before making a purchase.

You are busy in the Yamaha. It takes every limb of your body moving quickly and precisely to drive the YXZ fast. It’s fun to do that. You feel more a part of the machine and more active. The driving experience is enhanced for sure. Through every gear you feel more acceleration in the engine, and hearing the revs peak, drop, then peak again is something we enjoy just like we do when riding a Raptor or YFZ.

The RZR is more a “jump in, press the pedal and go” machine. And go it does. It’s faster in almost every situation without even putting in much effort. The Yamaha takes a driver that’s willing to dig deep just to keep up.

Another area the YXZ gets outshined by the RZR is in the rear suspension. We could hit the same bumps in both machines and the back end of the RZR will soak up the chop way better. We tweaked with the shocks on the Yamaha but could not get them to work as well as the RZR. The YXZ is not bad; it just finds its limits earlier, just like the Can-Am Maverick does when we compare it to the RZR. Shock companies like Elka have worked overtime to find a fix for this and already have products for sale. 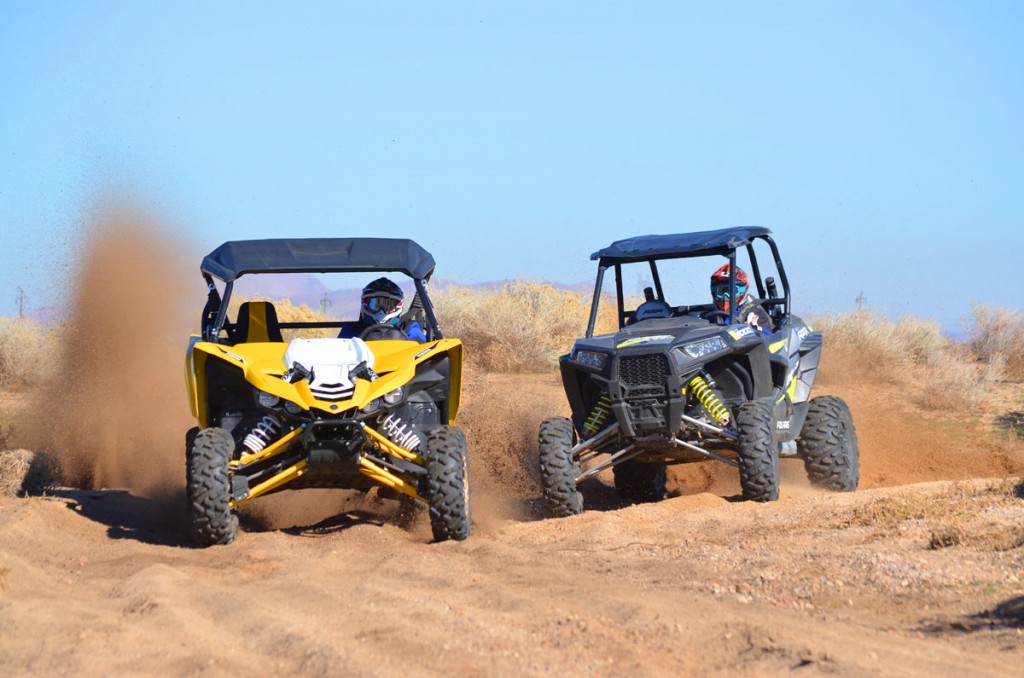 CONCLUSIONS
After more than two years of driving the RZR XP 1000, we know what the weak points of a RZR are. Yes, it has a belt that will not last forever, but we have proven if you drive it right and pay attention to what the revs are telling you, it can last thousands of miles. Replacing them is not hard, and if you carry a spare with you, the RZR won’t leave you stranded. The other weak points are the rear radius rods. They work fine in almost every situation except big mistakes. Polaris will probably improve this setup very soon. When things are going well, the rear end of the RZR can travel over rough terrain better than any UTV out there. We have yet to find weak points in the YXZ.

In any shootout the RZR has won before, it’s because it’s the easiest, fastest and most fun to drive UTV out there. In this contest the results are no different. While the YXZ is fun and more exciting in some cases, it’s not as fun overall or as the RZR XP 1000. 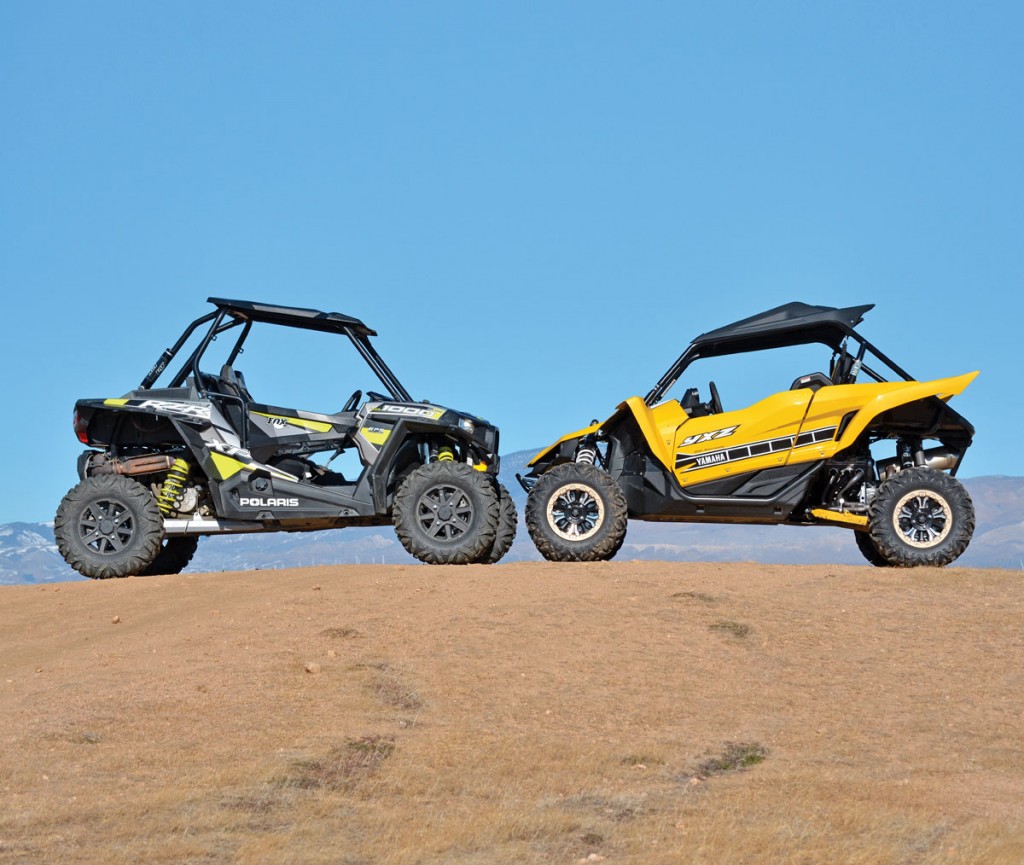