PRODUCT EVALUATION:Three products in one 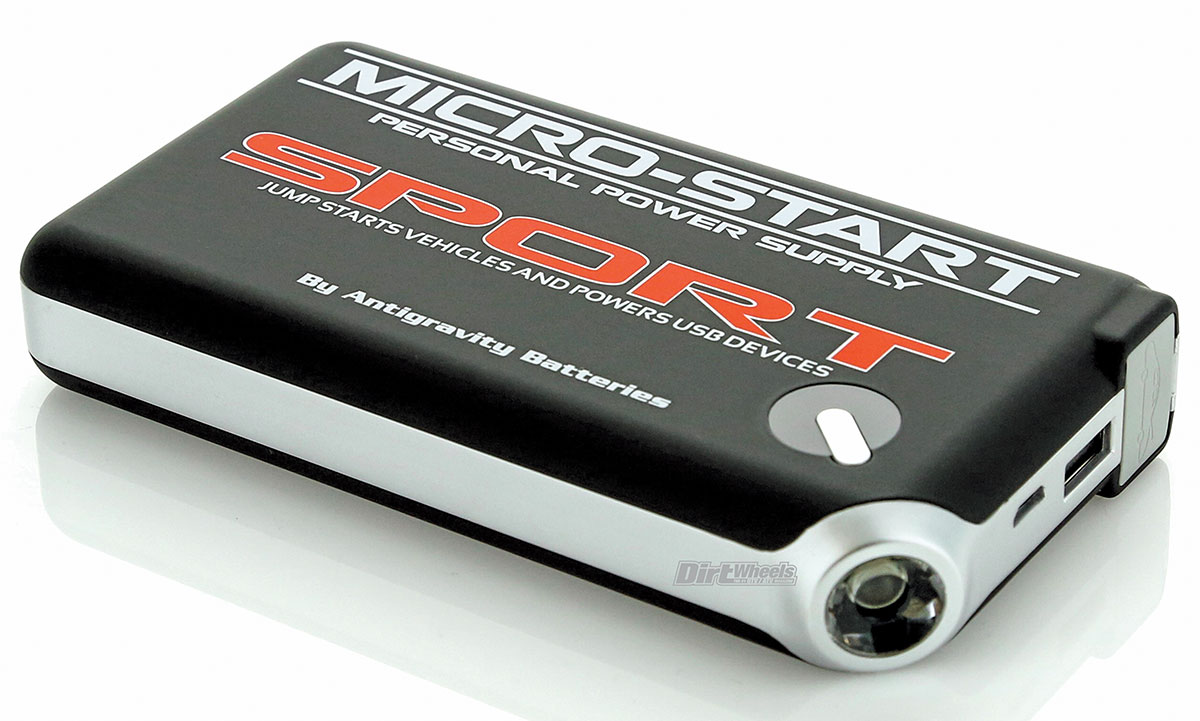 A dead battery on the trail wasn’t always such a big deal. Getting a tow-start or rolling your quad down a hill to bump-start it would have you up and running in no time. Now, with the power demands of electronic fuel injection and no way to bump-start a CVT-equipped machine, a dead battery can ruin a day of riding. Once the battery voltage drops to a certain level, the EFI injectors won’t fire, so there is no way to bump-start a modern quad, whether it has a CVT or not. Thankfully, companies like Antigravity Batteries and many others offer a product known as a personal power supply, a jumper pack or jumper box.

Antigravity calls their smallest product built for ATVs the Micro-Start Sport. This power supply is smaller in surface, but just a little thicker than a cell phone, and is much more than a lifesaver for your ride. At $99, the Micro-Start doubles as a flashlight and also acts as a phone charger all while being able to jump-start an ATV, UTV or even your truck.

The single, 70-lumen, LED flashlight works great if you need to look at something in low light or have to find something in the garage or shed with no lights. It has a flashing SOS feature, as well as a blinking red light that can be used as an emergency flasher. The Micro-Start comes with micro-USB, iPhone and GoPro charging cables, or you can bring your own cable along to charge virtually anything via the 2-amp USB port. Up to four glowing indicator lights will tell you how much charge the battery pack has left. Another great feature is that you can recharge the box while your ATV is running, if it has a USB port.

After a four-hour charge, we’ve kept the Micro-Start on hand to get us out of trouble. We first used it to start a RZR that had been sitting for a year. After attaching the alligator clips, the RZR fired up instantly. Then we used it on a RZR with an electrical drain, and it started instantly. For the ultimate test, we put it on a gas V-8 Toyota truck that had the lights left on. Yes, it started. We don’t suggest using the Micro-Start on larger motors if they are old or hard-starting in the first place. Antigravity warns against trying three jump-starts in a row, and you should allow the Micro-Start to cool between uses. The pack is rated at 150 amps starting current with a 300-amp peak.

We do suggest sticking the Micro-Start in a UTV glove box or cargo box of your ATV. Antigravity’s Micro-Start Sport power pack is one of our can’t-leave-at-home tools. We take it everywhere. You can choose the Micro-Start Mini or any of four larger personal power supplies or even vehicle batteries offered by Antigravity. Buy at your local dealer or direct through www.antigravitybatteries.com or dial (310) 527-2330 and tell them Dirt Wheels magazine sent you.