When a company is building a UTV, it isn’t a one-man job. There are teams for sub-sections of the machine: motor guys, chassis guys and suspension guys. We can tell you that the suspension guys yell loud and long to make sure that the tires are light to show off the suspension the best. Motor and chassis guys care about traction. When you actually own the UTV, you care about all of those things, but perhaps not as much as you care about getting back from your ride with no flats. Only you know what the tire traits are that appeal to you. Fortunately, there are a wealth of good tire choices for UTVs, and that list certainly includes the GBC Dirt Commander.

GBC’s Dirt Commander is a tough, eight-ply-rated bias ply tire. The eight-ply rating lets you know that this tire will resist impact flats well. As a general rule, radial tires offer a supple ride, so they are what a lot of UTV owners start with when looking for a tire. In the case of the Dirt Commanders, being a bias-ply tire didn’t seem to affect the ride greatly. Rather than merely relying on large, solid tread blocks, the Dirt Commander has grooves in the top surface of the tread lugs that supply additional traction-grabbing edges. As with many popular UTV tires, the tread blocks wrap around the sides of the tire to both protect the sidewalls and provide traction in ruts. GBC is constantly adding sizes to the Dirt Commander line, but it currently starts at 25X8.00-12 front tires and extends to several 30-inch sizes. A 32-inch tire is in the works.

The Dirt Commanders come stock on the popular Polaris General, so we wore a set of those out, and we have many miles with $134.50 Dirt Commanders for 12-inch rims on our project Ace 570 and on our RZR 800. For weight, we compared the Dirt Commander to the GBC Kanati we like for rocky desert terrain and the OEM-favorite Maxxis Bighorn, all in 27×11-12. The 10-ply Kanati Mongrels are 31.4 pounds. The eight-ply Dirt Commanders are 29.3 pounds, and the six-ply Maxxis Bighorns are just under 25 pounds. 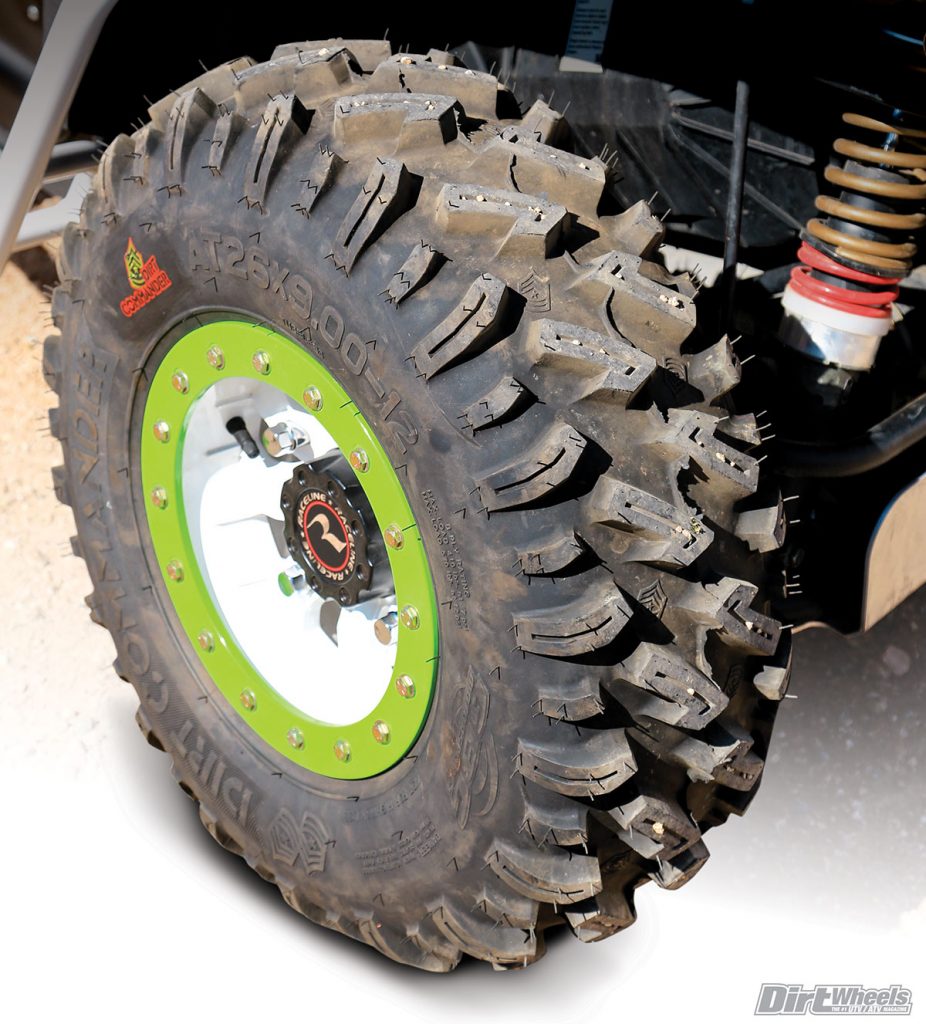 The Dirt Commanders’ bias-ply design imparts a planted solid feel to the ride that is subtly different from the feel of a radial. If you look at the GBC purpose and performance chart, it rates both the Dirt Commander and the Kanati Mongrel as excellent for rocky trails or desert, excellent for general trail riding and very good for soft terrain. The only difference is that the DOT-approved Kanati is street legal, so it is also rated excellent for pavement. The Dirt Commanders have a more open tread pattern, but we felt better traction under acceleration on surfaces that were loose or hard with loose on top. In the rear, the tire tread blocks rounded more quickly than the Kanati Mongrel’s. Despite the rounded shape of the tread blocks, the Commanders maintained good grip for acceleration. Sliding isn’t as smooth as with some tires, either, since the Commanders grab traction more noticeably. Braking is good, but the biggest difference for us was front-end traction. In every case we felt good, crisp front wheel traction and accurate steering compared to other tires on the same machine.

For any sort of general use, we are most impressed with the Dirt Commanders and would not hesitate to recommend them. The front end traction and great forward drive are worth the price. If we were driving where there were a lot of abrasive, rough rocks that might wear the Dirt Commanders quickly, we would stay with the GBC Kanati Mongrels. The 10-ply construction and road-tough tread would last longer in extreme conditions. The Dirt Commanders have a wider range, and they cross to soft terrain and mud better. See www.gbcmotorsports.com.