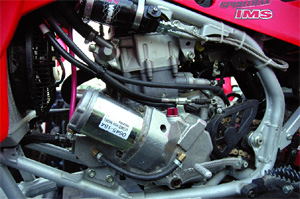 When Honda released the TRX450 for the 2004 model year, they mistakenly thought the public wouldn’t mind that it wasn’t equipped with an electric starter. The racers who bought the new high performance Honda could deal with the hassles of kickstarting, but trail riders would not. As far as they were concerned, an electric starter was a feature the machine was lacking, and sales that first year suffered because of it.
Honda saw the error of their ways and added an electric-starting version of the 450R to the 2006 lineup. For owners of the 2004 and 2005 models, this does not mean you have to sell your quad and rush out to buy the latest model (although Honda would like you to). After a year of development, Goki (pronounced Goke-Eye) Manufacturing has come to the rescue of those early model 450R owners with their electric start conversion kit. In the past, Goki has made electric start kits for Kawasaki Mojaves, 350X ATCs and Odysseys. Goki also manufactures top quality kill switches for all sport ATVs, plus a line of billet accessories for the dirt bike crowd. Goki’s 450R starter kit includes a new left side engine cover, starter motor, battery, battery box, starter button, and all of the necessary wiring and hardware for installation.
INSTALL
To mount the kit, we had to first drain the left side engine oil and remove the side cover. With the provided puller, we had to remove the stock flywheel and install a new ring gear. Next, we re-installed the flywheel and stator. To cover these parts, we installed the new cover using the stock mounting points and supplied hardware. This cover actually holds 17 percent more oil than the stock one. It also places the oil filter outside at the front of the engine. This spin-on type is much easier to service than the stock unit. The final step on the engine was to bolt the rather large starter motor onto the new cover. Goki said “we went with what we know works. We have been using this same starter motor since the late seventies, and it’s very reliable. Sourcing a new, smaller unit would have brought the kit price up at least $100.” Installation of the starter kit took about two hours following the very detailed instruction sheet Goki supplies. 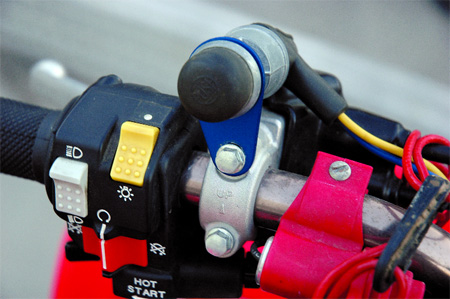 To keep costs down, Goki uses a generic pushbutton to activate the starter motor. For a cleaner look, they could have used the switch cluster from a 400EX or an  E-start 450R, but at a higher price. However, the Goki button works great.
The battery and electrical system took half as long to install. We routed the positive cable under the fuel tank to the rear end of the airbox. Following the supplied instructions, in this area we had to carve out the bodywork surrounding where the owners manual and tool kit used to rest.  Per the instructions, the next step was to attach the battery box to the subframe. Power from the battery to the starter gets routed through a solenoid mounted on the outside of the battery box. From there, we routed two more small-gauge wires back up front to the starter button. The button mounts to the left side clutch perch (on the handlebars).

START ME UP
The Goki starter works. You push the button and the engine fires instantly. Yes, it’s quick enough for XC race starts! The starter motor sound reminds us of a large generator being fired up. Installing the Goki kit has no effect on the kickstarter whatsoever. In the event the battery fails or a wire comes loose, the kickstarter is always there as a backup. Speaking of the battery, it gets a constant trickle charge (when the quad’s engine is running) off of the headlights power system. Unfortunately, if you stall the engine while riding at night the lights will go dark just like they did without the battery.  Quality of the kit seems to be first rate. We have been using the system on one of our test quads for a few months now without problems. For $599, the Goki kit fills a big need for all 2004 and 2005 TRX450Rs. The only downside is that it will not fit on the 2006 kick-start model and that the headlights go dark when the engine is not running. To order an electric start kit for your 2004 or 2005 TRX450R call (818) 998-0852.

FEATURE: QUADS OF THE WORCS RACES

Why Should You Check the VIN Code Right Now?