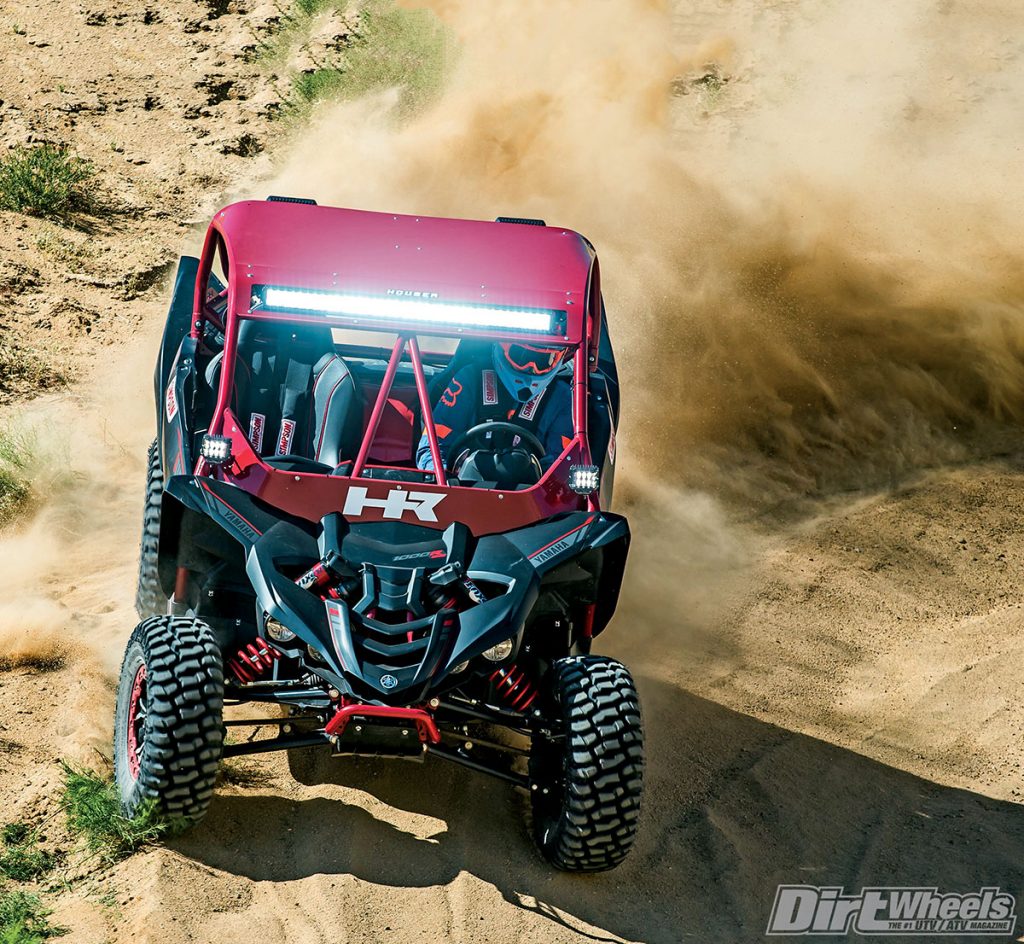 Even in the daytime the Rigid lights shine extremely bright and look good doing it! They’re much more impressive at night, giving us a much broader spectrum of light than before.

Most new UTVs come with amazing LED headlights/taillights that create surprisingly good lighting for driving at night. Our 2017 Yamaha YXZ1000R SS SE race build happens to be one of those cars that have great lights. The OEM LED headlights are run by a simple switch that selects low beam or high beam depending on the throw of light you need. If you’re like us, however, and you love blasting across the desert, woods or dunes at night, the stock lights aren’t going to provide the best lighting.

Since we’re building our YXZ for racing and, of course, just having a great time driving, we wanted to install some high-end lights. We went to one of the leaders in UTV lights—Rigid Industries.

The E-Series light bar was the first projected light bar on the market, and it came out in 2006. Since then, the E-Series light bar has been Rigid’s best-selling light bar. For our YXZ, we decided to go with the 38-inch combo light bar that offers a dual spot and flood design. This option gives incredible light. The other reason we went with a 38-inch light bar is because it fits perfectly in the opening of our Houser Racing cage.

The E-Series light bar features an instant on/off capability with no warm-up; over/under voltage protection; durable polycarbonate lens; 50,000-plus-hour LED lifespan; 17,480 raw lumens; a plug-and-play harness and lighted switch; 209 watts; and a low-amp draw of 15.14. The beam distance is a whopping 0.84 of a mile!

The D-SS Side Shooter Driving Pair lights were built to be used on the cage of the YXZ or other popular models. Rigid made a trick mounting system that mounts directly to the front bolts of the YXZ cage, and it worked great with our Houser Racing cage as well. The D-SS Side Shooter is a unique cube light that offers LEDs on the side of each light, as well as front-facing LEDs, giving you the broadest range of light possible.

Other features include a 50,000-plus-hour lifespan, Gore pressure-equalizing vent, 3308 raw lumens, nine LEDs, 134M beam distance, 24 watts per light, 2.3-amp draw per light, and it comes with a plug-and-play harness and lighted switch.

Most race series require a rear LED chase light, and we needed one for doing most local desert races when the car is finished. Rigid has their chase LED lights in red, blue or amber colors. We opted for two amber Chase lights, so it looked more uniform and provided the most safety possible for the competitors behind us. It has three modes to choose from—strobe, running or brake light. It has an adjustable tube mount from 1.75 to 2 inches to fit most sport UTV cages. The rear-facing white LED area has 715 lumens, and the down-facing courtesy/cargo light has 168 lumens.

The E-Series light bar and D-SS Side Shooter cube lights come with an awesome plug-and-play wire harness that makes hooking up the electrical simple. The D-SS wiring harness comes with two pigtails, so you only use one harness for both lights. The Chase rear lights don’t come as a plug-and-play option, but we tied them into our D-SS harness, so when they are running so are the Chase lights.

With two people, the E-Series light mounted easily to the top tube of our Houser Racing cage. It’s held on by two aluminum brackets that mount flush near the roof and lined up with the roof cutout nicely. The D-SS lights were even easier to mount with Rigid’s aluminum cage-mount brackets that they provided us. The mounts for the Chase lights were the most difficult to mount, as the slot for the nut wouldn’t hold it tight. However, the nuts were small enough that we could hold onto them with needle-nose pliers and snug them up tight.

LET THERE BE LIGHT!

The Rigid lights were a much-needed improvement for dusk-to-nighttime driving. Just the E-Series light bar alone shines so intensely that it gives the feeling of daylight. Add in the amazing little D-SS cube lights, along with the stock headlights, and we had ourselves pushing the YXZ to the same speeds as we were driving during the day. The rear Chase lights are very bright, and the strobe feature is going to come in handy when other drivers try to keep up in the dust! The bonus cargo light that the Chase lights have makes it great for seeing our gear in the dark. One of the most impressive parts is even with these lights added on, we didn’t need to add a second battery option. Rigid has done their homework to make these impressive lights work well and at a low-wattage and -amperage cost. Better lights and better safety, what’s not to love?

Are These Dunes in DANGER?